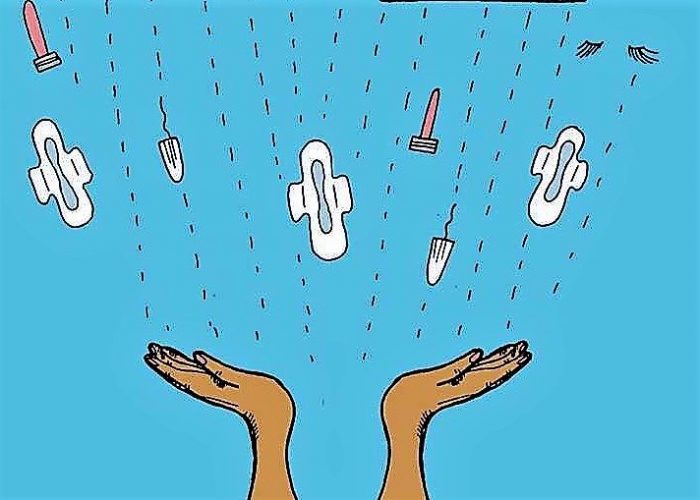 It is no secret that in third world countries, such as Kenya, India and Africa there is crippling poverty – and for women, it is a walking nightmare, especially when the natural, gut-wrenching ‘time of the month’ occurs and nothing is on hand to aid them. Nothing safe and secure.

Nobody would imagine that the situation in the UK is, in fact, no different. But it is, and it costs young women not only their livelihood but their dignity.

As a result, some women have taken it upon themselves to publicly highlight and, hopefully, eradicate ‘period poverty’ in the UK.

In contrast Britain is a highly developed country, so it is shocking that menstruation is even deemed an issue. However, Hayley Smith, the founder of Flow Aid, finds it reprehensible that students experience something awful that should be avoided: “It’s absolutely despicable in the 21st century that girls are forced to comprise their education simply because an absolute necessity is unavailable and not affordable,’’ she told The Guardian.

Natalia Faisal, a University Student of BA Journalism, expected better from the UK, much better. “I’m shocked that the UK has stuff like the Tampon Tax and just a lack of understanding,” she said. “I thought people here would’ve been more educated on the matter.”

Periods are a normal biological process affecting every female. In fact, they are a fundamental attribute of reproduction. Many girls are terrified by their first period. Initially believing that they are either ill or, in some cases, even dying.

Sanitary products are a necessity. “This is a basic need for women on their period. It’s not a divisive issue, it’s not right and it can’t be justified,” stresses 17-year-old campaigner Amika George in Elle UK, one of the few women who is tackling ‘period poverty’ from the front lines, ensuring school girls are provided for while studying.

For teenagers, it is a welcome asset, enabling them to focus on reaching their potential, rather than worrying about costs. “The obstacles that arise from not having such access like missing out on school can have damaging effects on teenagers in their development, and as a result lesser the future opportunities available to them,” says Herpreet Kaur, social media executive of the Binti charity, which aims to provide menstrual dignity for girls around the world.

Reportedly, sanitary products cost about £18,000 over a women’s lifetime, and it was in a south Leeds school that the cost of sanitary products for teenagers became a real concern, students were missing lessons and the extent of the matter brought the issue to a national prominence.

According to a BBC report, one girl started at the age of 11 and kept it to herself for three years, missing out on having proper hygienic products in the process.

“I felt isolated, I felt really alone. I kept this secret up until I was 14 years old and then started asking for help”, she said. “I didn’t get any money. My mum had five mouths to feed so there wasn’t much money left in the pot to be given to us.”

Not telling anyone, especially parents, can seem like a simpler option to take. According to Tina Leslie, who is founder of ‘Freedom4Girls’, an organisation that originally aids school girls to tackle period poverty in Kenya, parents who have kids and earn very little make it difficult for their children to seek feminine hygiene products.

She described student one who had to make do with cheap washing-up liquid for almost everything: “She didn’t even tell her mum about her periods because she knew she wouldn’t be able to afford sanitary pads.”

Other students across the UK face the same distress. Schoolgirl Marie was just filled with agitation, instead of feeling enthusiastic and happy, she was often waiting anxiously to see how she could get through the day without any embarrassment. “I feel dirty and stressed at school when I’m on my period. I can’t concentrate properly and I’m embarrassed to tell the teachers why,” she said in an interview for documentary makers Refinery29.

These stories motivated campaigner Amika George to dedicate her move towards the feminine students and fight for their rights. “No child should have to compromise on her education and her aspirations just because she has a period,” she says. So far she has petitioned, organised a peaceful protest and campaigned on social media using the hashtag #FreePeriods.

For a number of young girls’ embarrassment has been a harsh reality: “Some girls have spoken about being laughed at and never forgetting the humiliation of that. When you have one pad or tampon, the chance of that happening is high,” explains Amika. “So, for some children, it’s not worth the risk of going to school.” 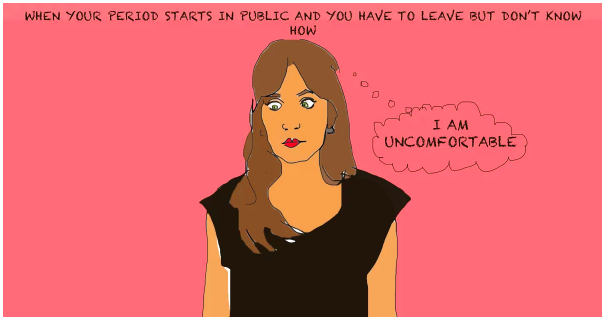 The fear of humiliation has led young students to take impractical approaches, just so their dignity remains firm amongst their friends or peers. “I wrapped a sock around my underwear just to stop bleeding because I didn’t want to get shouted at. It just feels like you’re in this miserable state. I didn’t know what else to do,” recalled one of the students of Leeds.

Reportedly, many are so afraid or embarrassed that they have ruined their clothing to try and cover up their discomfort. “It’s not acceptable to menstruate without dignity,” says Herpreet Kaur.

In another case, a group of girls in Aberdeen eventually sought refuge in a food bank: “We’ve had some girls that have come in saying they don’t feel clean enough and things like that so they stay at home, rather than going to school or out with their friends,” admits Kelly Donaldson to the BBC, one of the food bank volunteers.

A survey showed that in 2017, 14 per cent of girls had sought sanitary wear from a friend due to costs, while 19 per cent said they had been forced to change to a more inappropriate sanitary product due to costs.

For the students not affected by ‘Period Poverty’, it’s still an issue they feel strongly about: “I can’t imagine if I am there wasting pads on some irrational fear, how people who can’t afford sanitary products feel,” admits Natalia Faisal.

Another student, Sara Silvennionen says: “Periods should definitely not be made more difficult than they already are. I’m all for free sanitary products.” Another student, Apai, agrees: “I have been in a situation, where I’m waiting for payday, my period has also come but I literally go through all my bags to kind of scrape some money together to be able to afford pads,” she told us. “Luckily for me, it’s not something that has happened more than three times in my whole period life.” 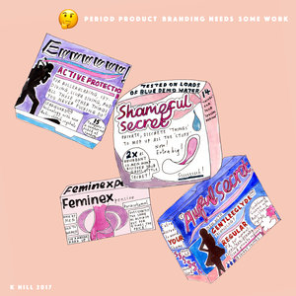 Apart from the costs, some believe that stigma and society’s careless attitude towards periods has played a part in this issue. The founder of Bloody Good Period, Gabby Edlin, who once helped the students in Leeds and is amongst the few fighting against ‘period poverty’ first hand, and she thinks it shows that society is sexist towards women.

“We live in an institutionally sexist society where women’s needs are not considered as vital as men’s,” she says. Amika states it is the stigma and taboo that had determined her to tackle the matter. Furthermore, she believes it prevents us from also knowing the exact severity of the problem. “It’s hard to know exactly how deep-rooted the problem is because of the general shame around periods, making it a subject that people are ashamed to talk about,” she says.

Experts and charities warn and advice that lack of feminine hygiene product can cause serious complications to women’s health, starting from toxic shock syndrome through to cervical cancer. “Access to menstrual products ensures the health of women, as poor menstrual care can lead to conditions like cervical cancer,” says Herpreet Kaur.

Dr Juliette Ross, a London GP explains: “Menstrual care is clearly a human right. Poor menstrual hygiene will increase the probability of toxic shock syndrome.” As a doctor, she is willing to support any move so to raise awareness.

‘Period poverty’ is a growing crisis in the UK that requires immediate attention and menstruation products without a doubt are essential for teenage girls during their studies.

Those fighting to eradicate ‘Period Poverty’ firmly believe the ultimate solution lies in having the unlimited free access or at the least a ‘guaranteed national provision’.

For the students, in particular, Amika George sees the long-term provision of free menstrual products for those who need it the most as the ideal solution. “This would be a statutory pledge from the government,” she says. “It would be well thought out so they can be accessed from pharmacies/chemists so holiday time doesn’t prove to be problematic.”