The social media sphere is growing and changing drastically: the algorithms of YouTube and Instagram are constantly being amended and the rules and regulations of the internet are fluctuating. Not only that, but they are, along with blogs, drowning in sponsored content.

Not too long ago you could scroll freely down your instagram feed without “#ad #sponsored” written at the end of every caption. You knew your favourite content creators as simple fashion and beauty bloggers rather than “influencers”.

There was an element of realness attached to bloggers that celebrities couldn’t give you, and you trusted them when they said those shoes were their “favourite shoes that they never take off” or a foundation was their “holy grail make up”.

Nowadays, this isn’t usually the case.

Bloggers, reality TV stars and avid video uploaders now have significant opportunities to monetise their social media content. Weather this is through various adverts interrupting your favourite vloggers video, posts about “use my personal code for 20% off” or even subtle sponsorship in fashion bloggers outfit posts – this is how content creators are now making a living. Influencers are changing the way brands advertise to their consumers.

Brands’ previous methods of marketing used celebrities to endorse their products through above-the-line advertising. Now there is a vast digital platform which is becoming more accessible to consumers. An influencer’s natural creativity and relationship with their audience gives them an advantage over celebrities.

As their work is online, so are their social lives; their personalities shine through as they share their opinions on products and provide insight into their personal lives. These characteristics of influencers generate trust between them and their audience. Brand’s have caught on and seen the opportunity to use influencer voices to sell their brands to a wider audience.

However, as influencers may be thriving off of the opportunities that brand deals provide, their relationship with their trusting audience may be damaged as a result.

In the early stages of influencer marketing many brands and influencers were not as open about their paid sponsorships as they should have been, creators were posting sponsored content without disclosing they were being paid to promote the brand.

However, the Federal Trade Comission stopped this from happening in 2017 with guidelines that require influencers to make it clear when they are being paid to promote.

Although it isn’t necessary for an influencer to disclose the exact amount they are being paid, it is possible for the public to research the average pricing of influencer posts.

This depends on the exclusivity of the brand, the number of posts and celebrity or influencer status. Tier one influencers, a-list bloggers and YouTubers who are considered as ‘celebrities’ naturally earn more per paid content than a tier two influencer who has a smaller following.

Obviously, bloggers and YouTubers have to earn a living somehow and paid content is a great opportunity for them to work with brands that they support.

However, as influencers are determined to make money and become more successful the line becomes blurred between posting about brands they truly believe in (which was the case 5 years ago) and purely promoting brands to gain an income.

There has been widespread debate surrounding the “influencer” career and influencers have been making a case to be taken seriously as creators for years.

Most recently, Elle Darby, a YouTube and social media influencer, was recently “exposed” by a hotel owner for asking for a free hotel room in exchange for her promoting the hotel on her social feeds. The White Moose Cafe responded, announcing that it is banning influencers from the hotel.

Many members of the public labelled the influencer a “freeloader” whilst her fellow influencers and subscribers slammed the hotel for bullying her. 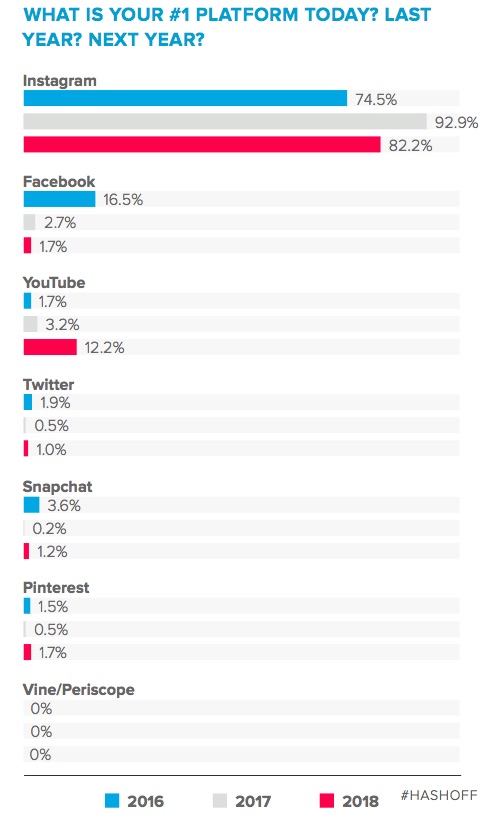 The top social platforms for influencer use via sprout social

Both content creators and brands are thriving off the benefits of influencer marketing; brands are reaching a wider consumer audience and influencers are making money doing what they love.

However, the audiences of the creators are finding it hard to trust their favourite bloggers as their opinions on products are becoming less believable.

Jackie Aika, a YouTube beauty guru with over two million followers, explains in a video that she is always honest with her viewers about her opinions on a brands products. “I enjoy youtube today just as much as I did in 2009, but it has changed. Commission based jobs are not a new thing but I do think it’s important to disclose when you are getting paid.”

Many other YouTubers and bloggers have reached out to their followers explaining that they do sponsored content in order to make a living and there is no shame in that. Influencers stand by their statements that their content is 100 per cent honest and they are not in the business of deceiving their dedicated following; after all it is their audience’s dedication that got them where they are today.

There is no real way of knowing the real reason an influencer is promoting a brand, weather just to make money or because they believe in the brand and enjoy their products, you just hope it’s the latter.

Casey Neistat, currently one of the biggest names in YouTube, says: “The audience appreciates up-frontness and honesty. Their appetite for bullshit is short and no one likes feeling duped. If the content is good, ad or not, it’s usually appreciated, but transparency is very important when communicating with an audience that signed up for you, not the ads.”

The phrase “influencer marketing” was searched on Google just fifty times per month in 2013 and when searched today there is almost six million Google search results; this and the visibly obvious proof on your own Instagram feed is evidence that this method of marketing is on the rapid rise.

Social media is growing and so is it’s value and importance to brands. Advertising is a large part of the online world and it’s important for consumers to recognise that blogging is now becoming a career rather than a hobby for some creators.

As long as their creative drive isn’t damaged in the works and influencers don’t lose touch of their relationship with their audience, then everyone is happy.