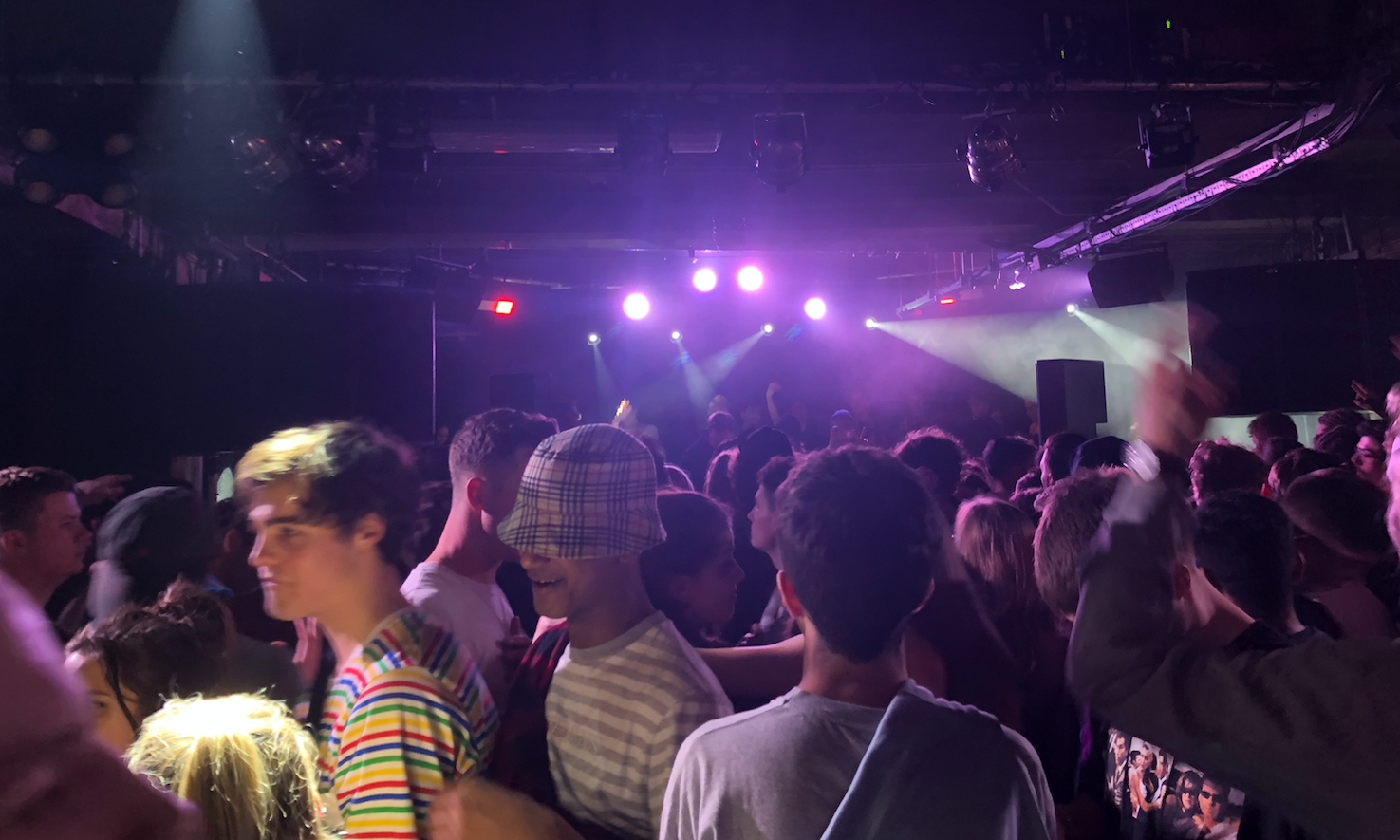 One of the leading figures in the lo-fi house movement of the past few years, Mall Grab came to East London to play a set on February 23rd. Tickets were totally sold-out. Mall Grab, the stage name for Aussie native Jordon Alexander, placed at number fourteen on Discogs year-end report for vinyl sales in 2017 for his lo-fi EP Pool Party, which featured the seminal tracks Catching Feelings and, of course, Pool Party Music.

He has quickly climbed the ranks within the dance music community since his debut EP in 2015. His meteoric rise can be accredited to his unique sound, along with the role as one of the masters of lo-fi house music.

The event was held at Hangar, part of the Wringer and Mangle building in London Fields and previous incarnations of its name include Mangle E8 and Laundry. The club received nationwide press coverage under its old name due to the acid attack carried out last year by Arthur Collins and have since had an attempted rebrand.

As this was the first event at the club under its new name, chat among revellers in the queue was that they were expecting that Hangar may have made some improvements. After a quick bag search, we meandered our way down the stairs into the basement, where all music events are held, to find the one-room venue exactly as it was under its old name.

It was surprising that they had not renovated the venue a little to go with their new name. The light show was stale and relatively similar to the one seen at a previous Horse Meat Disco event that was held back when the club was known as Mangle E8. It could have easily been adapted to fit with Mall Grab’s high-powered set. One point that cannot be missed is that at around 2:00am, the bar ran out of beer. No cans, no bottles and absolutely nothing on draught.

“A little effort on the venues behalf for such renowned DJ’s would go a long way. It would bring Hangar up to speed with other East London venues, such as Village Underground, The Pickle Factory and Oval Space, and match the incredible music that DJ’s so often deliver”

As mentioned, the event was sold out, so the tiny basement was like a sea of sweaty dancing bodies. The smoking area would be a welcome release from the hustle and bustle – except it wasn’t. Crammed into a barricaded area of the venue’s small car park, we decided that it would be best to stay inside not to miss any of the music.

Hangar puts on events that showcase the best in dance music, and forthcoming nights include appearances from Hammer, Crazy P and Mella Dee. A little effort on the venue’s behalf for such renowned DJ’s would go a long way. It would bring Hangar up to speed with other East London venues, such as Village Underground, The Pickle Factory and Oval Space, and match the incredible music that DJ’s so often delivered.

The event was run by Hackney-based music brand Percolate, who host nights at Hangar most weekends, which could be why Mall Grab performed here rather than a more established venue.

Despite this, the fact that the club is just the one small room made for an intimate feeling, which can be a welcome change from bigger venues, such as XOYO or Motion, Bristol, which Mall Grab had played as part of his tour the previous night.

“It was a dynamic show, displaying his talent at blending different genres and sounds into one energetic mix.”

During his set, Mall Grab played very few of the lo-fi tracks that he is renowned for. Many would have come to the show to hear him play his biggest songs live, including 2 B Reel, his re-work of Cheryl Lynn’s disco classic Got To Be Real and his iconic 2016 track I Just Wanna.

Despite not playing his own songs, the set was near flawless journey through his eclectic taste in dance music. It was a dynamic show, displaying his talent at blending different genres and sounds into one energetic mix.

Thudding industrial beats were cut with UK Garage and the crowd was enamoured when he dropped Sugarhill Gang’s Apache (Jump On It) between classic house tunes. The music saw phenomenal pace and drops, which kept electricity flowing through the audience long after Hangar’s 3:00am curfew. It was easy to lose track of time, and when the lights were harshly turned on at the close, it was barely noticed, even by Mall Grab.

He kept playing long after the club’s curfew and when he finally finished his set, he was met with the crowd chanting for more, and even though some were cascading off to the cloakroom and back up the stairs, he returned to the stage with friends and blasted OutKast’s, Ms. Jackson.

Whilst it was a rather out of character choice, it was met with delight from the remaining members of the crowd and electricity filled the small basement once more.

When the music was finally over, potentially after a stern word from Hangar’s staff, Mall Grab jumped down from the decks, ready to pose for pictures and chat with fans before heading backstage. Without music, it was suddenly apparent how stark the venue had become so we took ourselves back up the winding staircase and out into the cold night, not quite believing the evening that just took place. It felt like the best kind of lucid dream.