Clean air in the square

The London Clean Air Coalition (LCAC) have been organising demonstrations in Trafalgar Square to protest about the state of pollution in the capital. LCAC is a semi-formal alliance of anti-air pollution groups across London formed in the run-up to Mayor Sadiq Khans pollution consultation at the end of February.

Members of Stop Killing Londoners, Our Air, Our Health (OAOH) and London Car Free Day were present. Protesters wrote ‘clean air’ on the floor with daffodils and distributed flowers to passers-by. They also had an air quality monitor to show the public the high levels of pollution on the day.

Helena, spokesperson for OAOH, told Artefact: “The point of ‘clean air in the square’ was to have a family-oriented peaceful demonstration to raise awareness about air pollution in London. We believe that breathing is a right. The government is not taking bold enough action to tackle air pollution and protect citizens from the toxic effects of air pollution. 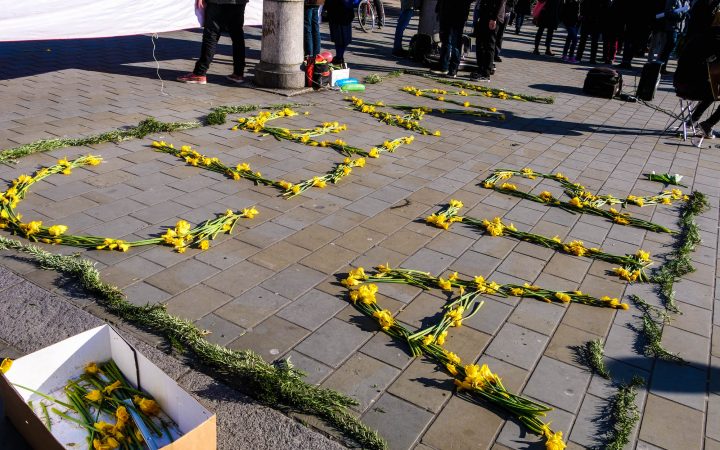 As many as 9,400 people are estimated to die due to pollution-related illnesses annually in Greater London. The Mayor’s response to this crisis has been to propose a toxicity charge (T-charge) and ultra-low emission zone (ULEZ). The T-charge is a £10 charge for older, more polluting vehicles that don not meet the minimum emission standards to drive into central London. The ULEZ will mean that petrol vehicles that don not meet ‘Euro-4’ standards and diesel vehicles that do not meet ‘Euro-6’ standards will have to pay a daily fee (£12.50 for cars, vans and motorbikes; £100 for buses, coaches and HGVs) to drive in the zone, 24 hours a day, 365 days a year.

A report from the Commission on the Future of London’s Roads and Streets has argued the mayor must do much more to tackle this pollution crisis, however. They have suggested methods such as prioritising greener transport on the roads, developing a pan London pre-pay smart road user pricing scheme and creating incentives that encourage households to give up their parking permits such as Oyster card credit.

‘Stop Killing Londoners’ member Roger told Artefact: “There’s quite a lot of community groups in London who are concerned about air pollution in their neighbourhoods, around schools and walking along the streets, it’s 400 per cent over the legal minimum. The idea is to try and get those groups to work together at public events like (this) and try to get Sadiq Khan to have a meeting, which he’s refused to do so far.

“They’ve brought in lots of symbolic things which actually have zero or minimal impact on actual air pollution. It’s a bit of a PR exercise like at the moment where they’re charging £10 to come into London if you have a diesel vehicle, but you look at the small print its like five per cent of diesel vehicles. What the public want to know is how much is pollution going to come down in London, and the letter we got back recently which was signed by Sadiq Khan said that they only intend to bring pollution down by 40 per cent by 2030. That’s an average of still having 80 per cent of present pollution for the next 13 years (…) that’s hardly ambitious is it?”

Stop Killing Londoners have taken a more aggressive approach to protesting with several members arrested for spray painting City Hall. They often blockade roads in busy central London areas and are planning to blockade Tower Bridge. Roger has said there will be more demonstrations this March.

One anti-pollution group, Mum’s For Lungs, has started a petition to ask the Mayor to bring emission levels to within safer limits by 2020 which has reached 1,800 signatures. They agree that the current plan to reduce emissions by 2030 is not effective enough. The group are protesting on a very personal level and believe it is unacceptable for them to have to walk the streets of Lambeth with their children, knowing they are breathing in toxic levels of pollution.

The group have stated that: “Some of us were shocked to be told our own lungs were dangerously full of NOx and particulate matter during our pregnancies, others have been appalled to discover that our children are suffering from recurrent breathing difficulties and lingering coughs”.

NGO Client Earth has also taken a more direct and urgent approach to the situation and has taken legal action against the government. Following their third win, their lawyer Anna Heslop said: “The judge ruled that the government’s plans were seriously lacking and has ordered urgent and additional measures. In addition to the government substantially losing this case, the court has made an exceptional ruling which will allow us to return immediately to court if the government’s next plan is not good enough, to protect people’s health.”

The government had faced a lot of scrutiny over its air quality policies which pushed Mayor Khan to introduce his new measures. A report prepared by the UN by special rapporteur Baskut Tuncak last September argued the government is “floating” it’s duty to protect its citizens from mounting air pollution.

On the 14th anniversary of the Congestion Charge, the Mayor told the Independent: “As Mayor, I will continue to do everything in my power to address and tackle this public health emergency, but it’s not something I can do alone.”

Citizens of London, whether mums, lawyers or environmental groups have all expressed their concern over the air quality in London and are pressuring the government to take the issue more seriously and introduce harsher and more effective tactics.