In an age where elephant rides are considered abhorrent and are banned by major tourism companies, it’s bizarre to see the sport of Elephant Polo thriving.

A little under the radar, the sport was established by the World Elephant Polo Association (WEPA) in 1892 and whilst the majority of hosts have pulled out of the games due to pressure from animal rights groups, Anantara Hotels & Resorts continues to host the ‘Kings Cup Event.’

Though many argue that the sport is an important part of Thai culture, it was actually invented by two Brits, James Manclark and Jim Edwards, over drinks. Considered to be Bangkok’s Ascot, it is wealthy internationals who participate in the games, including British and Scottish players (last year’s teams can be found in their 2017 leaflet).

The domestication and riding of elephants by mahouts (elephant trainers), however, is a tradition, one which Anantara Resorts aims to protect, they say they offer “A place where the animals are rehabilitated in their native habitat – assured of medical care and sustenance – while the mahout and his family are also well taken care of.”

The polo games aren’t featured much in British media, however, Jack Whitehall in his Netflix series Jack Whitehall: Travels with my Father featured the sport briefly, and as a result, a petition was drawn up asking Netflix to adopt an animal cruelty policy for its original content; the petition currently has 4,170 signatures.

The ‘Kings Cup’ will be held from March 8-11 this year in Bangkok, celebrating its 16th annual tournament. It promises to be a ‘highlight of international high society’s annual social calendars’.  The event will feature live music, DJs, a beer garden, riverside yoga and a fashion show; last year the polo field transformed into a runway with models strutting Thai fashion designer Monlada Pongpanit’s latest styles.

A charity event, the sport heavily boasts their donations and conservation efforts. They have also claimed that domestication of elephants is better for them because of threats they face in the wild such as poaching and habitat loss.

Rather than attempting to tackle these threats at the cause, they encourage the industry that profits from the elephants and present the tournament as if it is a ‘holiday for the animals’.

On their website, the Kings Cup Elephant Polo say: “Street life can be brutal for an elephant, walking through crowded tourist areas and busy roads for ten hours a night, forced to rest during the day often without shade and water. The King’s Cup schedule is deliberately designed to give these elephants rest and relaxation on a scale they are never afforded in their ‘normal’ lives.”

Training elephants still require breaking their spirit with beatings and constraints, even whilst some elephants are born from their captured counterparts in captivity, tools such as bullhooks are still used to tame these wild animals and can be seen being used in the games.

The World Elephant Polo Association refused to give Artefact a comment. 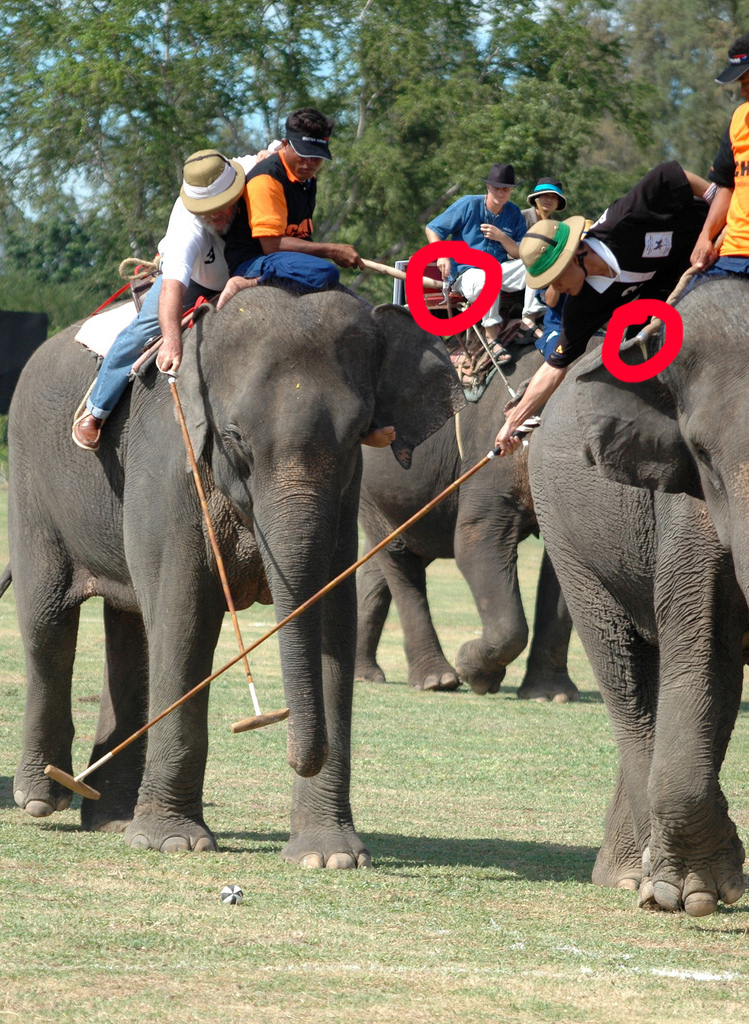 Though the sports claims to do a lot for elephant conservation, elephant charities deem the domestication of the wild animals as inhumane.

Wildlife Campaign Manager, Chiara Vitali from World Animal Protection (WAP) told Artefact: “Despite the claims of the organisers, elephant polo is not humane. Elephants are not domesticated animals, they are wild animals that are tamed through brutal methods. This seemingly funny and harmless ‘game’ is the result of intense training to ensure the elephants are under full control by humans and trained to perform these unnatural behaviours.

“Elephants used for rides or entertainment are often stolen from their mothers shortly after birth and then brutally treated to become submissive enough to control. They are often hit with hooks or other tools during this time until their spirits are broken. They’re kept on concrete floors and bound by chains when not performing, are fed poor and unnatural diets, and receive limited veterinary care.”

Carol Buckley, spokesperson for Elephant Aid International agreed: “The information you have been given is justification for elephant exploitation. Common sense suggests that the defence is false.”

A weak justification for the mistreatment of elephants in the tourism industry is all too common. Tourists are eager to turn a blind eye for once in a lifetime photo opportunities to ride and come close to elephants on holiday, the tourism companies are willing to encourage the activities for economic gain and the mahouts who are often struggling to feed their families or reliant on drink, feel they have no choice.

Tiger Tops, a tourism company who have now stopped hosting elephant polo, have recognised the mistreatment of elephants in the games and in the tourism industry as a whole. Manager D.B. Chaudhary had said, “After stopping elephant safaris, we have decided to stop hosting elephant polo as well, the termination of the popular event may disappoint tourists for some time, but it will end sufferings of elephants.”

Housing mahouts, which Antara proudly claim to do, only downplays a deep set problem also. The history of captive elephants in Thailand is messy and complicated. Seen as cultural icons, they feature prominently in Thai art and religion and have worked for humans in transportation, war, and logging for many centuries.

The collapse of the logging industry and modernisation, however, has left mahouts and their elephants jobless. They have since turned to street begging and the tourism industry for their income. Once respected as honourable workers, mahouts are now disadvantaged and downtrodden.

Often these elephant trainers don’t own the elephants either but work for larger companies, this can lead to mahouts seeing elephants more as a source of income than as sentient animals.

Thailand Elephants said: “Hired mahouts with no natural or cultural experience and affection for elephant’s often see their elephants as the cause of their woes and treat it accordingly.”

Mahouts need help to transition into different industries that are more beneficial to them and their families. Encouraging the business of domesticated elephants for tourists only leads to the capturing and breeding of more elephants, even in sanctuaries.

A report by UK-based wildlife monitoring group Traffic found that the demand for elephant tourism is leading to a black-market of wild animals. It concluded that: “The poaching of wild elephants from both Myanmar and Thailand is almost exclusively due to the elephant tourism industry. As such, there is a strong argument to consider either developing robust systems that prevent poaching and illegal trade, an assessment of the live elephant trade in Thailand or phasing out elephant tourism in Thailand altogether as a mechanism for safeguarding the wild populations of an already endangered species.”

With changing attitudes and developing industries, the domestication of elephants in areas like Thailand has been left in ethical shambles.

Tourism only encourages growth where reform is needed, a report by WAP revealed tourism to Thailand doubled from 15.9 million to 32.6 million visitors between 2010 and 2016, “contributing to a 30 per cent rise (1,688 to 2,198) in elephants held in captivity for tourist activities.”

Through an investigation of 2,923 elephants at tourist venues in Thailand, Sri Lanka, Nepal, India, Laos and Cambodia, they found 77 per cent of them were mistreated.

Publicity such as elephant polo is so influential in a period where these countries have thousands of working elephants that make an immense amount of money from tourism.

Tourists and businesses are turning a blind eye to the mistreatment – some argue elephant rides are fine without the chair structures, others accept trainers when they tell them elephant painting is fun for the elephants, tourists and businesses such as Anantara claim elephants are better off working than in the wild at risk from poachers and human conflict. Celebrities and charities supporting riding elephants for sport can only hinder progression.

In a report, WAP concluded: “A true elephant-friendly venue is purely observational for visitors, where the safety of visitors and wellbeing of elephants is not affected by the need to constantly control the animals.”

With many companies distancing themselves from elephant polo in recent years it can be expected that the sport won’t continue for much longer, however, the Kings Cup is still one of the biggest charity events of the year in Bangkok with many attendees from western countries. It could be argued that education on the elephant tourism industry is still necessary for the UK today.

By Atiyyah Ntiamoah-Addo
7 Mins read
Meet Jaheim Harry, a young Tobagonian footballer who has been given a once-in-a-lifetime chance with a sports scholarship in Portugal
FoodVideo

By Emil Brierley
1 Mins read
We explore what Food for Life is and how they manage to feed over 200 people a day.
Lifestyle