Drag is an art form 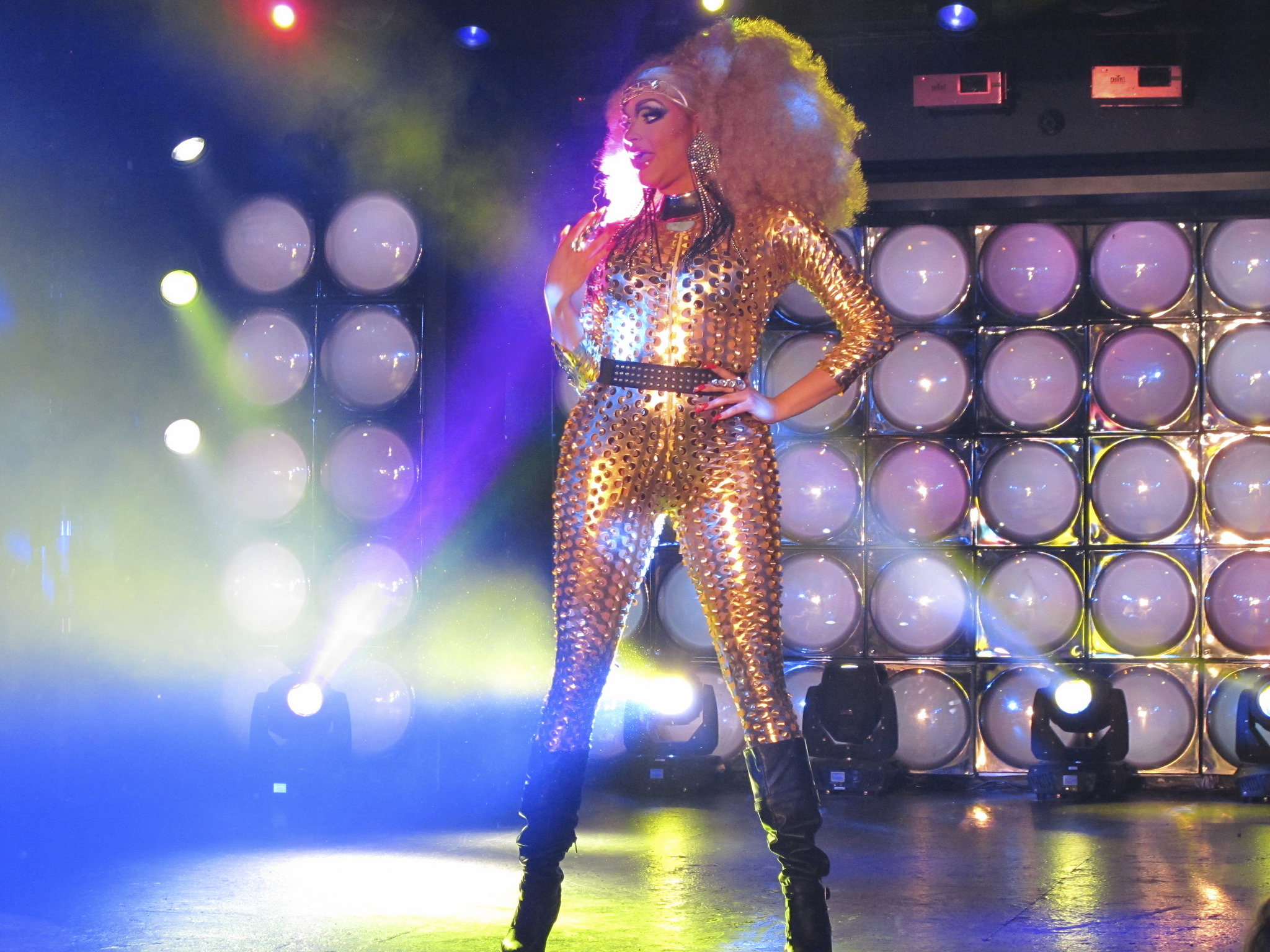 “As a kid, I didn’t really understand what the guy was or that term. I probably realised before this, but I didn’t know what to call it. I really knew that I was gay when I was 14. All of my life I’ve been quite I was scared. I was afraid of everything and everybody. I was one of the kids in the class that didn’t say anything.”

Meet Dolores*, who today is a 22 year-old fashion design student in London. Dolores is his stage name and was born and lived until age 19 in Moscow, Russia, a country which he believes is still full of discrimination and old-fashioned mentality about the world and people.

He says it sometimes seems like nothing has changed since communism: “It’s very difficult to be different, especially in the country where everyone expects you to look appropriate and don’t draw attention because otherwise, people will immediately judge you. The place where it is really hard to be yourself.”

However, after he graduated from High School, Dolores decided to change his life and move abroad: “I thought I would die of happiness when opened the e-mail saying that I got to the university in London. I cried, I knew that my world would change and I will finally be able to be fully myself,” he exclaimed.

The first thing to notice about Dolores is his impeccable taste in clothing. He always wears haute couture. Today, he’s dressed in black; a charcoal floor-length dress made out of nothing more than lightweight silk and classic Margiela split toe boots. The texture of the dress appears so fragile, even ethereal.

“I just came back from Paris Fashion Week as I was again working with the genius Rick Owens. I love being a gothic girl in his world,” he laughs loudly. 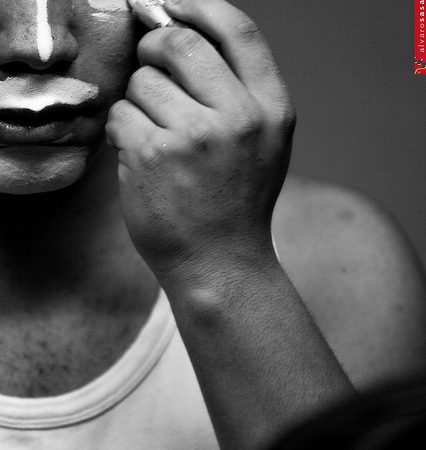 Make-up is one of the biggest parts of being a drag queen [Flickr:Alvaro Sasaki]

Dolores had always been interested in fashion, and this is why he has always known that he was going to be a designer, an artist. He gives me a cheeky smile when asked what his favourite drag outfit is and says “Well, honey, I’m not really a big sequin queen. I wear most of my own designs, and my favourite is probably the cotillion dresses with a sheer turquoise lace confection anchored at the throat by a florid red velvet bow. I feel like a fairytale princess while wearing it!”

As we chat in his bedroom while he’s about to get ready to go out to the drag show I look around his room. I can see the pile of clothes neatly folded on the bed, just waiting to be put away in the wardrobe, the nicely organised make-up table and the most incredible antique giant mirror that fits perfectly with the unrefined modern look of Sebastian’s flat.

Make-up has always possessed a magical allure, and it’s probably the most intriguing element about drag queens. “I’ve been watching a lot of make-up tutorials on YouTube. Loads! You can’t even imagine how long I had to practise to be able to do it properly. The lips are the worst! It took me ages to do the perfect lip lining like Kylie Jenner. But I’ve learnt that makeup can be found in the unnatural, the unusual, and the outrageous,” he says as he glues fake lashes directly onto real ones to make his eyes look bigger.

His skin is like rosy porcelain, and it didn’t seem rough at all. It was rather smooth and glowing. As he finished his make-up, the student looked like an entirely different person. At that moment he wasn’t the original man anymore, it was his alter ego, Dolores. Today, she was wearing teddy boy suit in tomato red silk and killer six-inch glass heels.

The history of Drag is long and complex – it started in a theatrical setting, with female impersonation going back to ancient Roman literature and classical Chinese theatre. The term ‘queen’, which was considered a more derogatory term to describe a gay man, has been around since the 18th Century, but the word has now been reclaimed in a more positive sense.

Drag queens first started to appear in the 1950s and 60s, but the modern drag scene didn’t fully flourish until the 1980s and 90s. “Drag is not necessarily a man dressing as a woman anymore, it has become an art form. It’s become a culture,” said Lewis G. Burton, who has been doing Drag for over 15 years.

Lewis is one of the more famous ‘Queens’ and also a promoter. He runs a series of exclusive performances called Maison Des Fous. “It’s great because my job is my lifestyle. A lot of my friends are self-employed, so I see them a lot too. I don’t have to work during the week. My Monday is Saturday.”

However, he didn’t want to reveal how much money people can actually make just by appearing in Drag. “The best thing is being able to make people laugh and getting paid,” he added after a pause.

Dolores is still a student, so how much does he spend on drag, and how does he manage to organise his school life with his night alter-ego? He tells us that he works part-time as a sales assistant in one of the high-end shops in Mayfair, combined with his student loan and as he says, “it helps a lot” as he was raised without a father, and his mother does not have enough money to help him afford life in London.

“I party just on the weekends. Sometimes I have friends coming over during the week, and then we like to dress up and just play around at home” he continues. To be able to study in London, students need to put a lot of hard work, be flexible and be very passionate about what they do, and so does Dolores, who puts all his heart into his study as he dreams to be a fashion designer one day.

“The course itself is not cheap” he says. While the school fee at the moment is more than £9,000 a year, but on top of that, students need to pay for the materials to actually be able to create. He doesn’t use Drag to make money, but he does Drag because he loves it, and believes that it brings people pleasure.

However, many people do treat drag as a job, and they make a good living out of it. On the very top of the list is Adore Delano, who makes over $800,000 US dollars a year – after taking part in RuPaul’s Drag Race, she released her debut album Till Death do us Party which reached Number three on the US Dance and Electronic music Chart, also to date she is one of the best-selling drag recording artists of all time.

Sharon Needles who also appeared on Drag Race makes most of her money on YouTube and also hosting the web series Ferace! where she’s reaching over a million views. Finally, there’s RuPaul who makes over $7 million a year and received the Emmy Award for the Best Reality Show Host for RuPaul’s Drag Race.

The Drag queen is not just a lifestyle; it’s also a business. The money which famous Drag Queens make is an outrageous sum in an industry where most queens perform in bars for few pounds bills.

The clothes, makeup, accessories do not fall from the tree like apples; it’s expensive and time-consuming. But people who do Drag love it, and it’s a huge part of their identity. For Dolores, the drag queen is the party style. A way to loosen up from the boring everyday routine and also a way to spend free time in the more creative way.

He says that doing drag is something unique and beautiful, and it’s a way to express himself and to create. Being a drag queen does not in any material way reflect on either your sexual orientation or gender identity.

Other have their own reasons: Lewis said that he grew up in a private school and fell in love in with drama, and the comedy. He found himself friends outside the school who were similar to him, who liked the same things.

Lewis also discovered that is not alone and there are many people around who were like him, were gay. For him drag is a much more dominant version of himself, his name is also his brand as he performs under his real name. 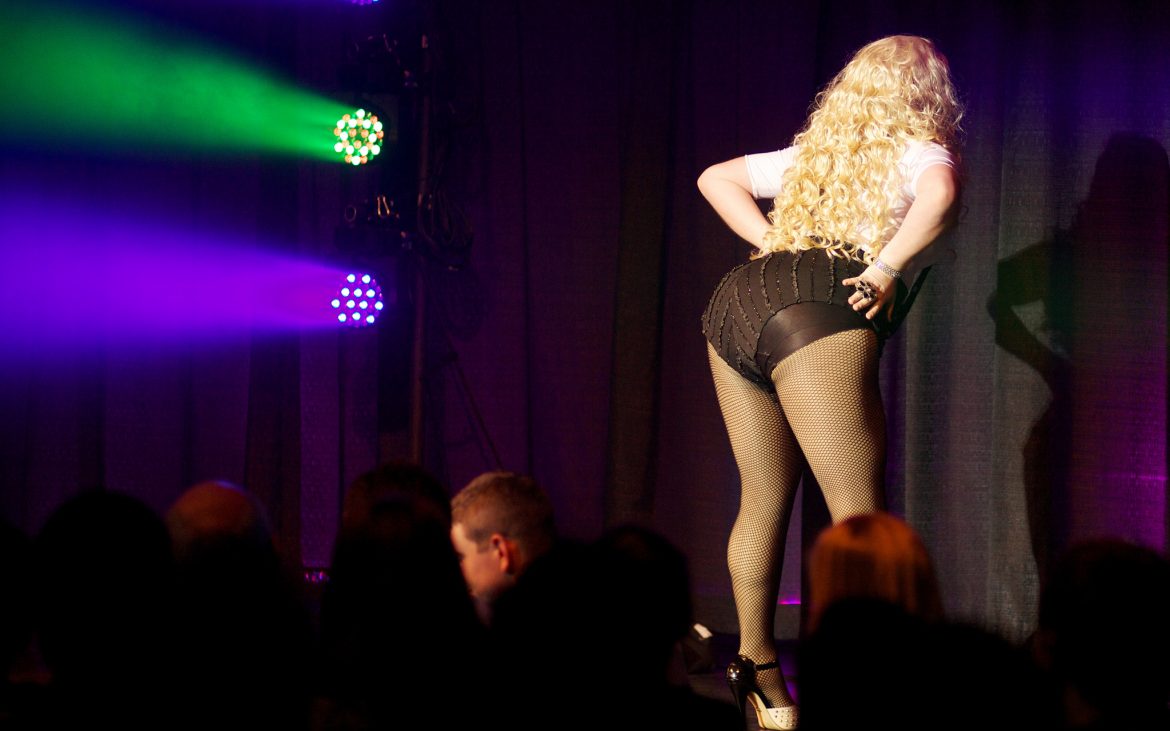 The shows are powerful and fun. It’s more about personality rather than sexuality [Flickr:Andrew Iverson]

We walk into one of the clubs, the Glory, just outside of Kingsland Road in Dalston and a short walk from Dolores’ apartment. The main room was thick with a red mist, which drained colour but heightened sensation. The walls quivered with mirrored gold tiles.

The club is full of creative, crazy dressed-up people with the most insane make-up I’ve ever seen in my life. The stage was covered in golden glitter and was sparkling like diamond rocks in the sun’s rays.

We immediately spotted Lewis who looked beautifully smudged and a little bit messed up. Tonight Lewis is going to be one of the performing acts. “You know, I’m not going to lie: I still get the nervous butterflies in my stomach,” he says. “But, after I make eye contact with people, I just zone into the performance, and it finally fades away.”

Tonight’s performance was unbelievable. I had never been to the Drag show, and I didn’t know what to expect. Lewis totally surprised me, and his performance was insanely funny and extremely facial. I realised that the society is judging gay people, queer people, or just people who want to express themselves and very often we are wrong. Just because for many of us this might be still a taboo, something that we don’t want to notice.

As the night came to an end, we walked back home through the street of East London. It’s a beautiful, wintery night, however, is surprisingly not cold. Probably, because these couple of glasses of Californian Cabernet did its job and we might have been a little bit tipsy.

When we get home, Dolores will take off her make up and will transform, like Cinderella back to rags from her ball gown again, into a regular student.