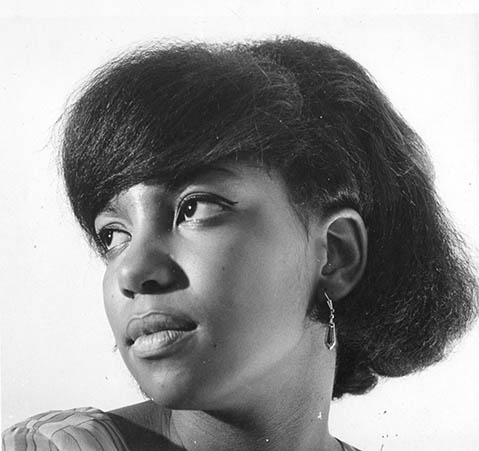 As I make my way to the home of photographer James Barnor, a mixture of nerves and excitement begin to build. I had only met James a handfull of times in my life. Once was during one of the saddest times I’ll ever experience. James had photographed my little brother’s funeral. The photos are treasured by my family and I. 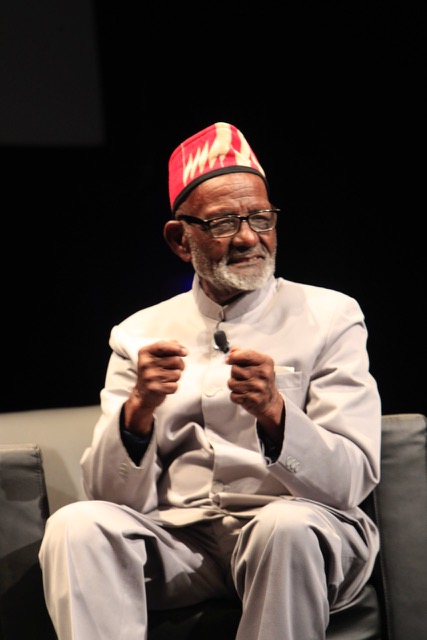 Another time, my father and I met James when we were out on our travels. My Dad gave him a lift and proudly told me I am to call him “Grandad”. The last time I saw James was on his 85th birthday back in 2014. My Dad took me to his exhibition in his hometown, Hounslow. It was the first time I had seen his work, and I was blown away.

James was exhibiting stunning pictures that captured black culture – Ghana in the 50s, black cover girls in the 60s and images of influential people such as Muhammed Ali whom he pictured at a fight at Earl’s Court in 1966. It was clear that he had witnessed so much in his life, and we were able to see just a glimpse of it through his photographs.

I arrive at his flat, and I immediately feel at home, I look around, and I see posters from some his exhibitions including the one I attended. It amazing that within the small confines of his residence is a plethora of photographs and negatives that illustrate some historically significant events. I feel I could learn a lot from James and he certainly has many stories to tell, too many for our meeting he tells me: “When I sit here on my own I have a story, but I don’t know when it will be written.”

Before I have even asked my first question James begins to share his story. James’ career spans six decades, but it was only in recent years that his work began to receive recognition with exhibitions in France, Italy, Ghana and here in the UK. He has exhibited at the V&A museum, October Gallery and the Black Cultural Archives. His work represents societies going through some of the most prominent and historical transitions – from his native Ghana gaining independence in the 50s to London becoming a multi-cultural hub in the sixties.

He says there were many reasons why he went into photography, but the main factor was because he had seen photography within his own family. “My mother’s big brother was a photographer, and another uncle was a photographer. Even their brother who was a professional teacher also took photographs. But I don’t know whether that influenced me more.”

It is clear that the art of photography was in James’ blood. He credits his cousin who was a leading portrait photographer in Ghana’s capital Accra at the time with teaching him the craft. James added: “Besides him, I met somebody else who I got to know was my close cousin, and I should say he influenced me in the journalistic side of photography.” James was already in journalism as the editor of his school magazine. 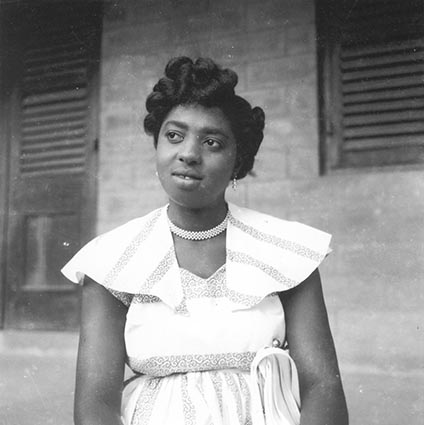 Photography wasn’t a typical career choice or expectation in Ghana when leaving school: “When you go to school and get to secondary school then you’re heading for a lawyer, an accountant, you know something big, a doctor. So photography is low.”

However, it was possible to learn the photography through apprenticeships without going to or finishing school. One of James’ cousins was concerned about school and thus pushed him towards ‘books’, the other wasn’t so concerned.

At one point he took a different career path heading into the teaching profession but had concerns about the amount of income he was earning. James resigned from teaching and went into photography in June 1947.

James tells me how there were not many picture papers in Ghana. The Daily Mirror group decided to establish a press in the country which was to become the Daily Graphic in 1950.

Cecil King, chair of the Daily Mirror group, visited Ghana with a delegation to see how they could start the paper. A photographer was commissioned by King to search for another photographer to join the publication. “This man was directed to my master, my cousin who taught me as the chief photographer in Ghana and he said I don’t do this type of photography but I know somebody who does.”

After the pair looked at some of James’ images, they replied: “not quite, but we’ll train you”. They asked James to visit the Daily Graphic and started to recruit some of the best journalists in Ghana.

As well as the journalists James worked alongside a close-knit team of editors and sub-editors. He explained that the team were already at work, practising and planning ahead of the first copy coming out in October 1950. James became the first photojournalist and newspaper photographer in Ghana. 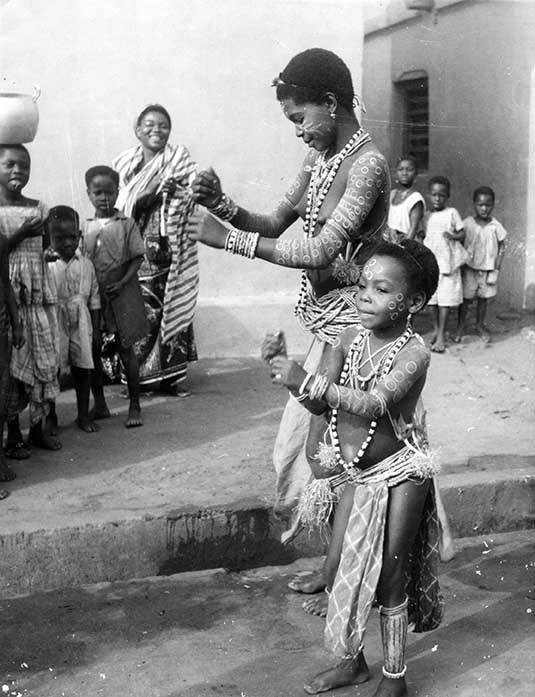 Puberty Rites, a traditional ritual in Ghana that marks the transition of young women to adulthood (1950s) [James Barnor]

He opened his first studio ‘Ever Young’ a short distance from his house in Jamestown, Accra in 1953. He kept his studio going while working at the Graphic. James proudly showed me an image of the studio. Here he offered a day and night service photographing people from all walks of life.

I am fascinated to learn about my native country Ghana which celebrated its 60 years of independence last year. James documented the countries move towards independence; he describes the prominent transition as ‘exciting’.

Ghana was the first sub-Saharan country to gain independence from colonial rule under their first Prime Minister, Kwame Nkrumah. The country had six to seven years to prepare for independence, during that time it had a legislative assembly.

James, who was in his youth at the time, attended the assembly hall almost daily, either as part of a newspaper or on his own taking pictures of all of the assemblymen from different regions of the country. Before independence Members of Parliament (MP) were previously known as Members of Assembly.

The album which is sadly now lost contained details such as names and constituencies. He tells me how there were not any paparazzi at the time or ‘hustle and bustle’ as he described it. James followed rallies and politicians, “I didn’t know what I was doing, but I was the young man at the assembly hall that they could call at any time with a camera.” 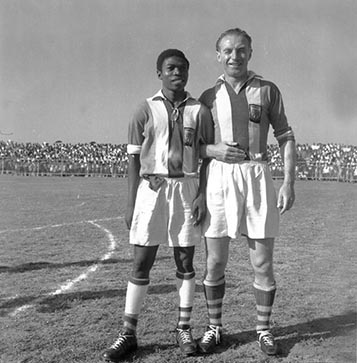 He describes his closeness to key political figures at the time, “I did visit the homes of some of the parliamentarians, if not the ministers, that’s how close I was with them and I could go to Nkrumah and then go to Danqaah (one of the opposition leaders) I was very close to them.”

James emphasised the importance of keeping negatives and not throwing them away, something he learnt from both his cousins. He now scans and catalogues his work. It is clear that his focus is very much on the future and thinking ahead.

“The negatives and all the pictures were used for a purpose, and they’ve finished their life. But with the modern technology and modern information, they’ve all got another life that they’ve got to live because now we can scan them and we can pass them on, we can use them to write stories and history.”

You can’t help but warm to James’ while in his presence, his humorous side shines through and what I found very touching is the fact that he refers to himself as ‘Lucky Jim’. A term he says he adopted from a film with the same title. When asked why he’s given himself such a name he replies, “Because it seems as if everything was set for me.” 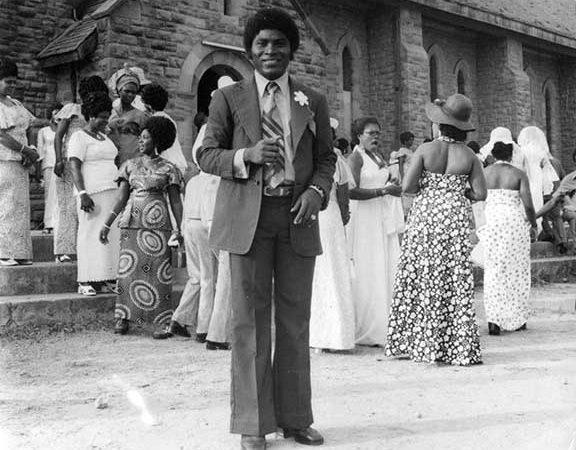 One of James’ tutors at Elementary school came to London, and when her left James asked that he tell him if England is good. In a letter to James his tutor simply wrote “London is the place for you,” and he goes on to tell me that he is trying to find that very letter.

James came to London on December 1, 1959. He lived with a Jamaican family in Peckham, South London. I asked him about his first impressions of the city, “I saw a lot of people of different nationalities which I wasn’t used to in Ghana, I was excited to see red buses.” He added: “Even though in Ghana we were colonial, it was very big coming to London.”

James spent a lot of time at Drum magazine’s offices on London’s Fleet Street. The South African magazine is credited with pioneering black journalism through photo and investigative journalism. He described life at Drum: “It was my house, my office, I got everything done for me there.”

It was through Drum that James sold his first picture which he said earned him money to prove that a photographer can get money. Through Drum an agency wanted an image of an African beauty, James went through his negatives and found a couple of images from a Miss Accra competition which he says took place either during or after the country’s independence.

Many of the images James captured in London were captivating and striking, from Drum cover girl Erlin Ibreck holding a pigeon in Trafalgar Square to BBC broadcaster Mike Eghan holding his arms out wide with a massive grin on his face in the middle of Piccadilly Circus.

He described a significant breakthrough in his career when he met fellow photographer Dennis Kemp whom he praises highly. Kemp was going to Nigeria to cover the Queen’s visit to the country in October 1960 following their independence. James helped Kemp plan the trip and ended up going with him following his experience with Ghana’s independence.

The pair also travelled around the UK giving lectures on photography. James started to learn colour processing while taking night classes at what was then London College of Printing.

He pulled out a badge that read ‘CPL’ and with pride he spoke of how he worked at the Colour Processing Laboratory, referring to himself as Lucky Jim once again he spoke of how he had few qualifications, but with the help of his co-workers at CPL and encouragement from Kemp to go back to school, he gained a place at the Medway College of Art in Kent.

It seems that James achieved a lot of firsts: first photojournalist in Ghana and to add to that he later introduced Ghana to colour processing for the first time in the 70s, he tells me, “If you are giving a lecture and you are using pictures that are grey, they are not so attractive.”

While showing me many of his images James describes how amazing it is to have them in his extensive archive collection to look back on, “You should see me when I discover a picture, I jump for joy,” he says with a massive smile on his face. “There are so many things I am discovering all the time, so my pictures are having another life.”

His disbelief at being ‘Lucky Jim’ is amazing to see: “I was ambitious at the time, but I didn’t think one day I would publish a book.” James says his work is now recognised in Paris, where his book Ever Young came about in 2015.

The book shows just some of James’ amazing archive. It’s amazing to hear James at the age of 88 say that he still feels young: “I still have a lot of work to do,” he tells me. James wants to educate the young through talks and continue archiving his work. “Inspiring young ones, that’s my aim. Inspiring young ones to be serious and work.”

After being with James for a few hours, it’s clear that the term ‘Ever Young’ is certainly fitting to both his spirit and mentality.