Rebecca Brodsky: Life and soul of the party

“We can party for days on end without sleeping. Though this is not the concept of my club, it has been a longstanding tradition since the 90s,” Rebecca Brodsky’s voice is reminiscent of an 80s rock-star, it makes everything she says seem like a revelation.

Team this up with a fuck-everything attitude and a loud laugh, and you have a woman whose job is to throw parties. Based in Berlin, a capital that is notorious for never growing up, Rebecca is about to open her second venue.

Born a twin in Karlsruhe, Germany in 1987, Rebecca and her sister Myra spent much of their childhood in the various casinos of Las Vegas. Being the daughters of a prosperous slot machine tycoon, they grew up running around poker tables, gambling and a lot of money talk, which is where the young entrepreneur might have gotten her business talent.

After starting out in the fashion industry, in 2013, at 24 years-old, Rebecca came to Berlin for a job that never materialised, and finally opened her first venue, a dance bar, ‘Larry’ in Berlin Mitte.

Named after something her father always used to say, “Häng mal nicht den Larry raus!,” (“Don’t hang out Larry!”) the club lived up to its appellation. A Larry is a slang for a show-off, making a scene, getting attention. 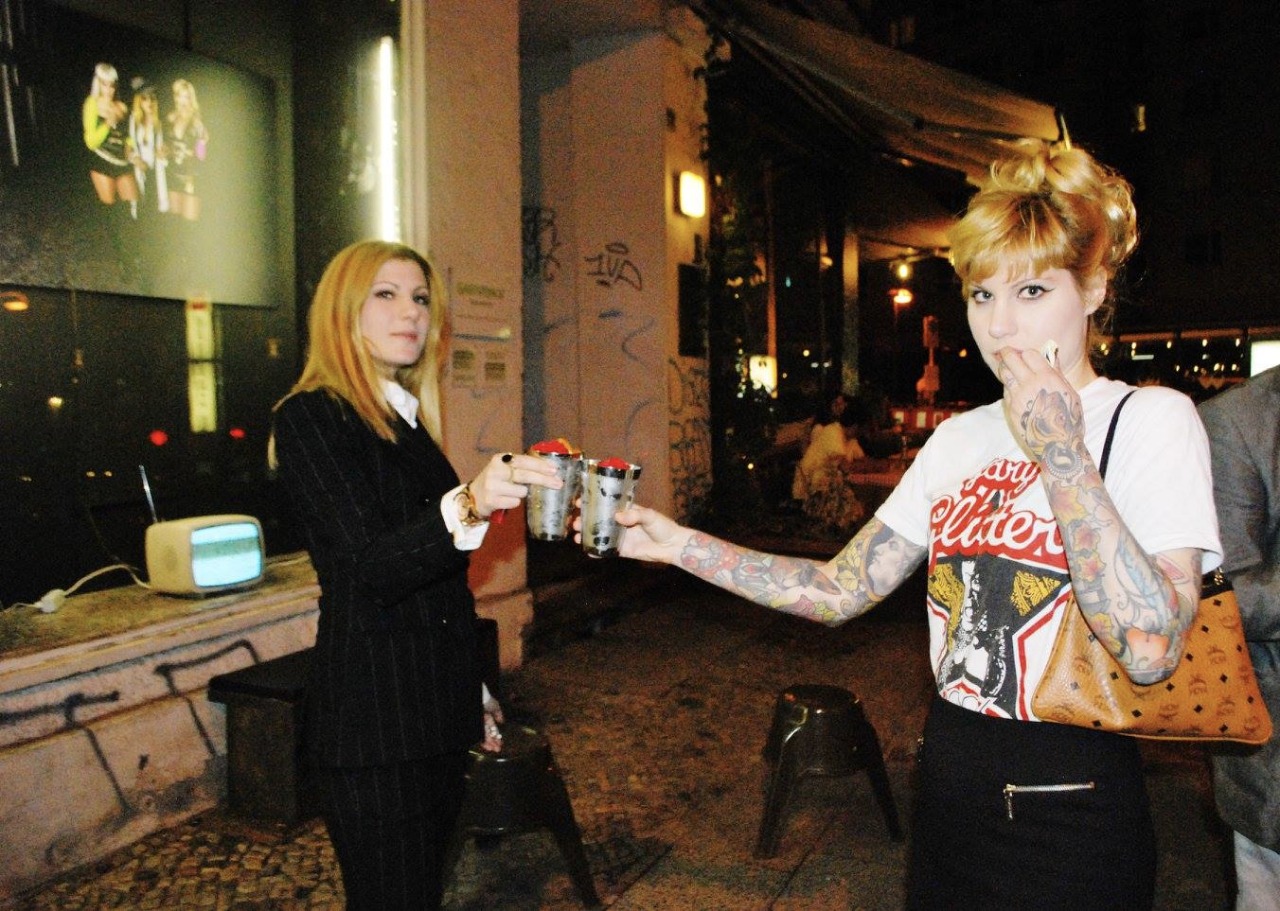 Rebecca and Myra in front of ‘Larry’ [Rebecca Brodsky]

“My father taught me to not be afraid of showing off,” says Rebecca. Hearing her say it, that might be the recipe for success. “Showing what you are and what you have to offer and what you’re about, rather than putting on a show and being the typical wannabe imposter type. Be proud of who you are and don’t hold back,” she says.

Not holding back is her strong suit, which contributes to the fact that you immediately feel at home in her presence and in her place, that doubles as her stage from time to time.

Now on the brink of opening her second place, Rebecca has always had a knack for bringing people together that wouldn’t otherwise be crossing paths, thus throwing parties seemed like the right business to get into. “I noticed that the party business was always going to be a popular business. I thought to myself; alcohol is Berlin’s last goldmine. And one thing led to the other,” she remembers.

Enamoured with the 1970s, Rebecca has forever looked back in time for inspiration, but her love for the past has cemented itself in the last couple of years. “I am more myself now than I was back then, so I only play the music that I really like. That means anti techno. I want my costumers to dance like it is 1973,” she says.

The Rolling Stones’ Can’t You Hear Me Knocking? is the soundtrack one could use to describe the scene Rebecca is describing. The music programme at Larry was mostly 70s, 80s, and a few 90s songs, never anything ‘hip’ as she says, never any top charts.

Rebecca feels like she has grown up in the last couple of years and she is more conscious of what will have a future in the city that is constantly changing.

“There are clubs here that last for 10-20 years. But if you don’t get the right people in your club, you will likely be shutting down within the first few years. A good concept needs to be timeless, and not built on some kind of passing fad,” she explains. ‘Larry’ closed back in 2016 and is now being replaced by what you could call an older, more experienced brother.

Renamed ‘Barry’, the new place has something coming-of-age about it, it is almost like seeing a character grow up on TV. Rebecca has left the ‘fucked-up-Berlin’ vibe, that was pretty present in ‘Larry’ behind, and is aiming for something a bit more worldly this time around.

Berlin’s nightlife seems to occupy a unique place in the world. It owes its reputation to iconic clubs like the Berghain that has been around since 2004, but also to its portrayal in pop culture classics such as the 1981 German film Christiane F. – Wir Kinder vom Bahnhof Zoo (Christiane F. – We Children from Bahnhof Zoo) featuring David Bowie – the message is always more or less the same: Berlin is messy, its free and it breaks the rules.

Going from ‘Larry’ to ‘Barry’ is a laborious process, not only because reinventing yourself is always hard, but also because Berlin itself, not as one would expect, is not making it easy for the 30-year-old.

“Things take time in Germany,” she explains, the formalities in Germany are quite time-consuming. It is the construction process that is holding her back – things such as building permit and fire protection approval are proving themselves as quite tedious. 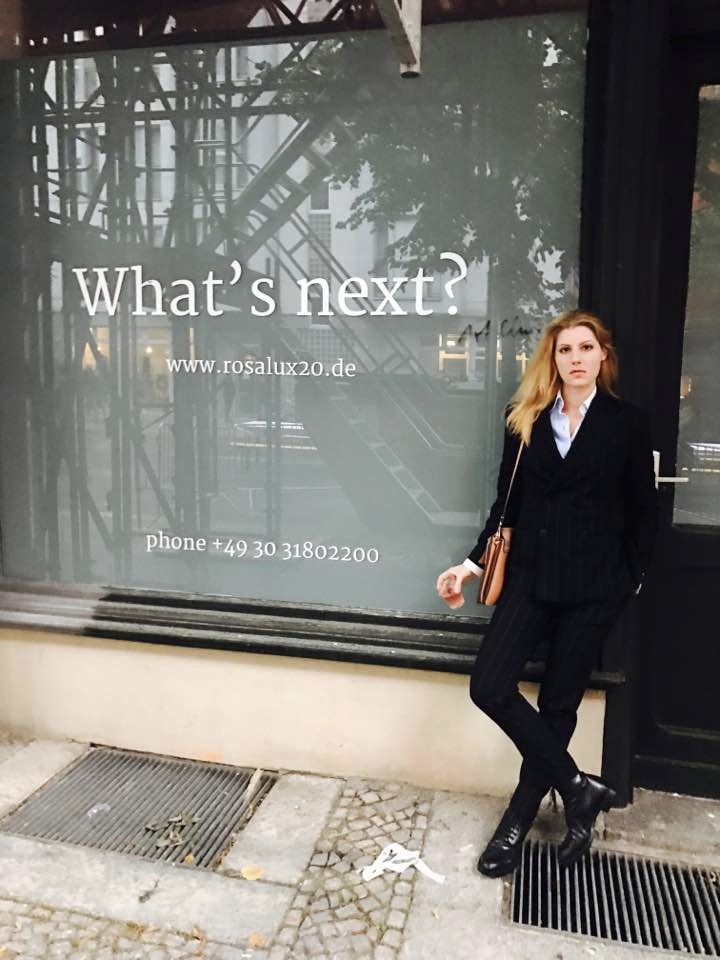 To most millennials it must seem like the dream, to do what Rebecca does. But not everyone can live up to the pressure. Like with any other business, it comes with a lot of responsibility, hard work but also with a nocturnal life and evidently with a lot of human interaction. And sometimes humans can be assholes, especially drunk and drugged ones. “You really have to be sure, that you are cut out to be a leader. It is crucial to be able to be open and inviting to anybody who steps foot into your bar.”

Although she was not in the queue when weakness was being distributed, Rebecca says that it is not always easy being a woman in the nightlife scene. “I remember a rose seller coming into my Bar. I didn’t want him doing his business in my place, which I told him. To this, he demanded to speak to my supervisor, and refused to believe me that I was, in fact, the owner of the place,” she recounts, adding that “nobody really takes you seriously especially at my age.”

Rebecca is not what you would describe as a typical Berliner. “I find Berlin quite ‘German’,” she remarks. “I often feel like an outlaw because I am in fact different. You have got to do your thing and defend what you are, to be accepted.” The way she pronounces some words or random pop culture facts she will drop into a conversation give away her love affair with the US. Living in between Berlin and New York in the past years, she has always tried to keep ties with the country she will sometimes call her home.

London too has made its impression on her. “Every place you visit in London is different. Especially music-wise,” she says. “In Berlin, most places now play the same stuff, there is not a lot of variety. Also drinks. In Berlin, most places put the focus on a large variety of cocktails. Cocktails don’t make a party. Atmosphere and music do. I think in those points London is a little ahead of Berlin.”

That one cocktail Rebecca drank in London, the cigarettes she smoked in Paris, the barstools that caught her eye in Los Angeles, Rebecca’s tastes are worldly and often from a different time, there is a little bit from everything. ‘Barry’ is planned to open in April in Rosa-Luxemburg-Straße 20 in Berlin and the anticipation for what Brodsky is curating this time around is great as always.

We're broke: Are side hustles burning out young creatives?

By Clarabelle Tan
1 Mins read
The rise of the size hustle inside the world of London’s young creatives.
AudioLifestyle

By Shontai Barnett
1 Mins read
Is a 9-5 job a scam? This audio documentary aims to separate fact from misconception in the age of Gen-Z.