Roger Federer: the making of a legend

Roger Federer told the media  on February 16, 2018, in Rotterdam, Netherlands after becoming world number one: “It’s an absolute dream come true. I can’t believe it (…) When you’re older, you sometimes feel you have to put, maybe, double the work, so maybe this one means the most to me.”

The Swiss tennis player has become the oldest player in history since the creation of the ATP ranking in 1970, surpassing American Andre Agassi who was world number one in 2003, at 33 years 4 months and 9 days. Last time Federer achieved the number one position was in October 2012. He also surpassed the record holder in the women’s game. Serena Williams was 35 when she was the last number one in May 2017.

Federer the tennis star was born on August 8, 1981 in Basel, Switzerland. At the age of 11, he was among his country’s top junior tennis players. He turned professional in 1998, and with his victory at Wimbledon in 2003, Roger became the first Swiss man to win a Grand Slam title.

Not to be outdone by himself, Federer showed again at the age of 36 that he’s not only the best on the circuit, but for the umpteenth time, that he’s best tennis player in history.

In the finals of the Australian Open, Federer defeated the Croatian Marin Cilic in five sets. Earning the 20th Grand Slam title of his enormous career as a tennis player.

He joined a club that perviously only included women: The Australian Margaret Court (24 titles), Serena Williams (23), and the German Steffi Graf (22). Federer equalled the records of Serbian Novak Djokovic and the Australian Roy Emerson by winning the Australian open six times.

According to the sociologist and journalist Malcolm Gladwell, the idea of becoming an expert in a discipline, whether it be playing the piano, mastering chess, becoming an artist, or a professional tennis player, it takes about 10,000 hours of practice.

Many take this as guidance rather than as a guarantee. All those accumulated hours of training slowly add up into days, weeks, months, and eventually years. This dedication paired with natural ability, good genetics, and a little bit of luck, are all part of the formula to becoming a professional tennis player.

Another important element is a player’s position in the world rankings, as is the ATP circuit. In this sense, exceptional skills and abilities are essential to being able to place in the pack of the hundred best players of the circuit. To reach the top ten takes all this and more, being the best of the best requires a player to go above and beyond in their physical and mental abilities, all in the pursuit of becoming a champion.

Artefact had the chance to speak to Narciso Regidor, a National Tennis Teacher for the Royal Spanish Tennis Federation. “The case that concerns us is unique and unrepeatable, not only for the unprecedented achievements at his age, but for that creative and original aspect of his game, which makes him a perfect and unique player, a genius of the sport of the racket,” Regidor told us.

Tennis involves cognitive-motor characteristics, this high precision sport requires great coordination. It is not enough to have developed a good game pattern to win these games but, to be well focused and be able to endure all the psychological pressures a five-hour long tennis match can bring.

Federer has a beautiful style with no palpable weaknesses and the ability to hit any stroke, featuring a sublime one-handed backhand and a reliable forehand as well.

Regidor believes it is easy to be impressed by the excellence of Federer’s game. The amateur or inexperienced player usually expresses admiration for how well Federer does it. “So elegant, what dexterity!” You don’t need to be a tennis master to appreciate seeing one in action. “He is a tennis player who generates pleasure simply by watching him play”

In addition to tennis, as a child, Federer excelled in many other sports such as badminton, table tennis, cricket, basketball, and especially football. In fact, he used to play in the lower categories of the F.C. Basel, although finally choosing tennis. “Without a doubt, this was the best choice for the expression of his gifts and talents.” Narciso added. 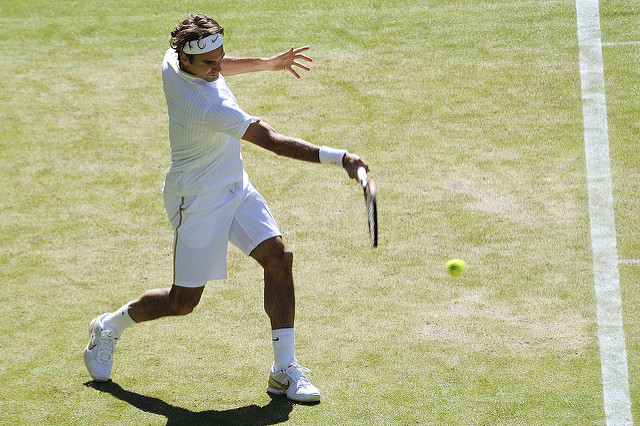 Another remarkable aspect of Federer is his respectful and exemplary attitude both on and off the court, although it was not always like this. At the start of his career Federer, like John McEnroe – another one of the best tennis players in history- did not have the best attitude on the court either. They were rude to the umpire, they often threw and even broke their rackets during the matches.

However, on August 1, 2002, a sad event changed the course of Federer’s professional career. His coach Peter Carter died in a car accident in South Africa a few days before Roger’s 21st birthday. According to Federer, Carter had the biggest impact on his playing style and remains the most influential mentor of his career, and that’s why since Carter’s death, Federer’s attitude on the ground changed completely. Federer said to The Australian: “Thanks to him I have my technique and coolness, he was not my first coach, but he was my real coach, I knew my game and he always knew what was good for me.”

Like the Phoenix, Federer has managed to resurface and evolve in his game. This is explained by Toni Nadal, former coach and current uncle of Rafa Nadal, in an interview in El Pais. Toni praised Federer and reveals that he has been changing things in his game over the past few years.

“When in 2013 or 2014 it was understood in many forums that Federer was in the decline of his career, he was willing to perpetuate and renew himself, he did not care about facing uncertainty when he had already won everything in his career, and his reputation was undeniable. He wanted to give himself the chance to continue increasing his record, doing what I have always asked of Rafa: Make changes on what has so far given you very good results,” Nadal said.

“Being able to observe where the shots go and modify what has been successful instead of continuing to trust in their virtues. When Federer understood that he had to evolve the concept of his game, he did it and waited for the results to arrive. This is a sign of intelligence, patience and above all, commitment to what he is doing,” he added.

Everyone wants to know Federer’s secret regarding his age and achievements. Below are what Artefact believe to be the five key element to the success found in Federer’s career on and off the court:

Federer’s exceptional combination of talent, productivity, and work ethic has empowered him to become one of the world’s most successful athletes.

In 2003, Roger Federer established his own charity and foundation to help the most disadvantaged, as well as to bring them closer to sport. A few years later, Federer was awarded the ‘Stefan Edberg Sports Prize’, which he received again in 2009, 2011 and 2012.

In 2005, he organised a tournament where he invited his colleagues from the ATP to raise funds for those affected by the tsunami in the Indian Ocean that occurred in 2004, and the following year was named Goodwill Ambassador by UNICEF and received the Arthur Ashe Humanitarian Award. 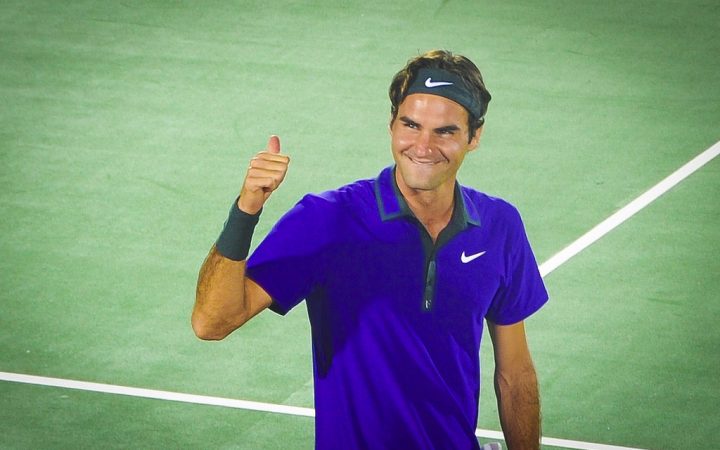 At the Australian Open 2010, both Roger Federer and his colleagues raised funds for the victims of the earthquake in Haiti. That same year, the tennis player organised along with Pete Sampras, Andre Agassi and Rafa Nadal, a game called ‘Hit for Haiti’ during the Masters of Indian Wells.

Roger Federer was named Young World Leader by the 2010 World Economic Forum thanks to his great humanitarian work. A year later in 2011, Federer was chosen as the second most trusted and respected human being in the world, behind Nelson Mandela.

If there is a charitable cause on the road, Federer makes the stop. He accepted an invitation from Andy Murray, who had already been in matches organised by the Federer Foundation, to play an exhibition meeting in Glasgow. Federer gave the crowd even more reason to cheer as he wore a traditional tartan kilt for this charity match.

How wonderful is it to enjoy this player at almost 37 years old and still be able to see him smash that prodigious back-hand; a unique experience.

After Federer won his 18th Grand Slam title in Melbourne he said: “When you’re good at something, make that everything.”

By Taysan Ali-Osman
8 Mins read
We profile up-and-coming rapper V.I.C on his success and where he plans to move forward with his music in the near future.
Life

By Lea Vitezic
5 Mins read
Artefact explores the world of start-ups and meets entrepreneurs who have set up their own successful companies.
Culture

Suddenly, I was Italian

By Denise Paganini
5 Mins read
What does identity mean? How is someone’s identity defined by their nationality?