SNO:W: In the name of art, fashion and music. 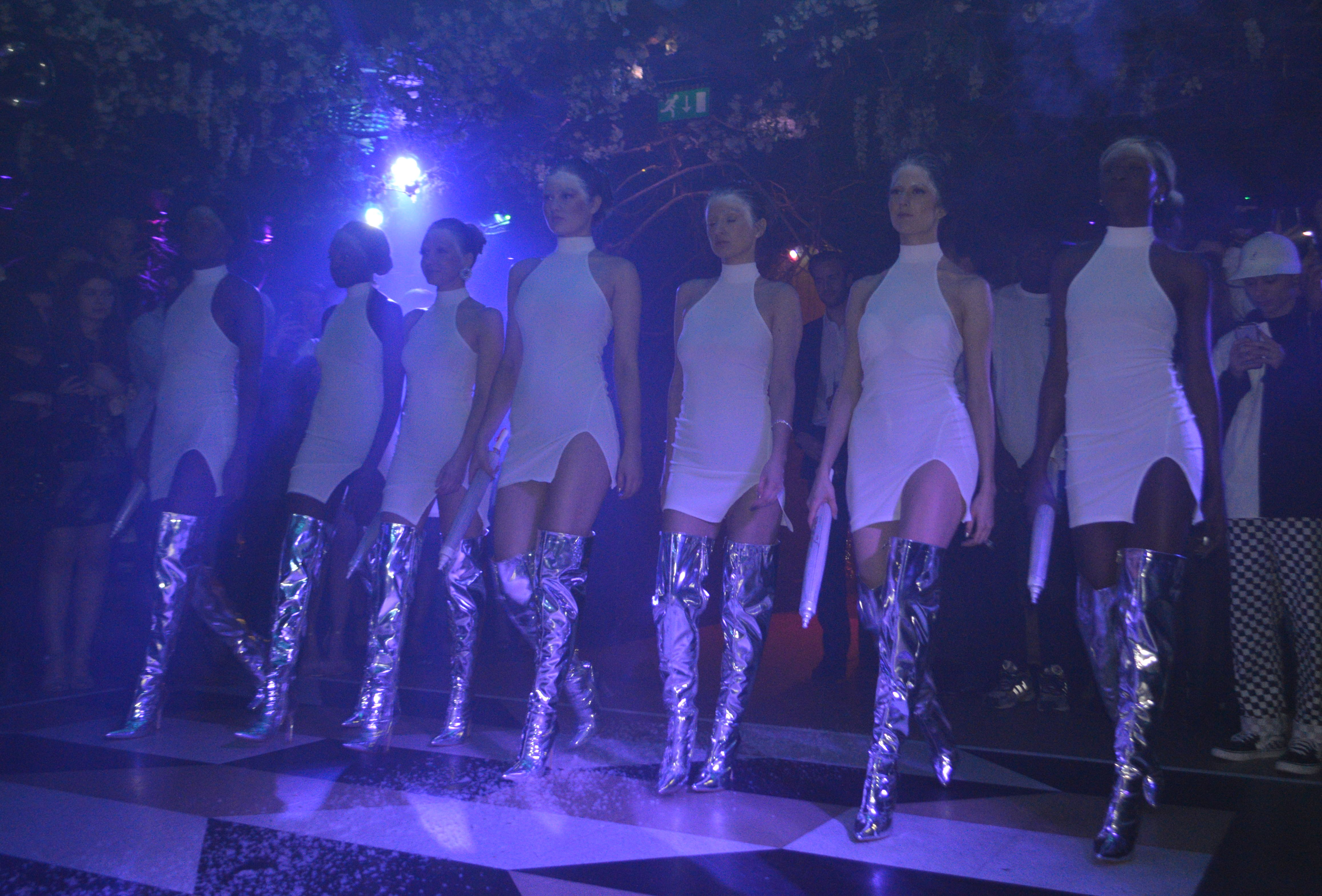 On Thursday, February 15, Artefact was invited to the Cuckoo Club to see an exclusive show hosted by THE TRIBE: The SNO:W.

As you can guess, the dress code was in solidarity with the main colours of winter – silver and white. The music was played by DJ Katrinka, Plamen and the vocals of Te Dee. Inspired by winter, the Deep House music set us all in a sense of euphoria and prepared to start an amazing journey.

Fashion was only in white colours that evening, and it celebrated creativity and collaboration. It gathered a snow-inspired collection produced by stylists such as Mary Petra and students from London College of Fashion. 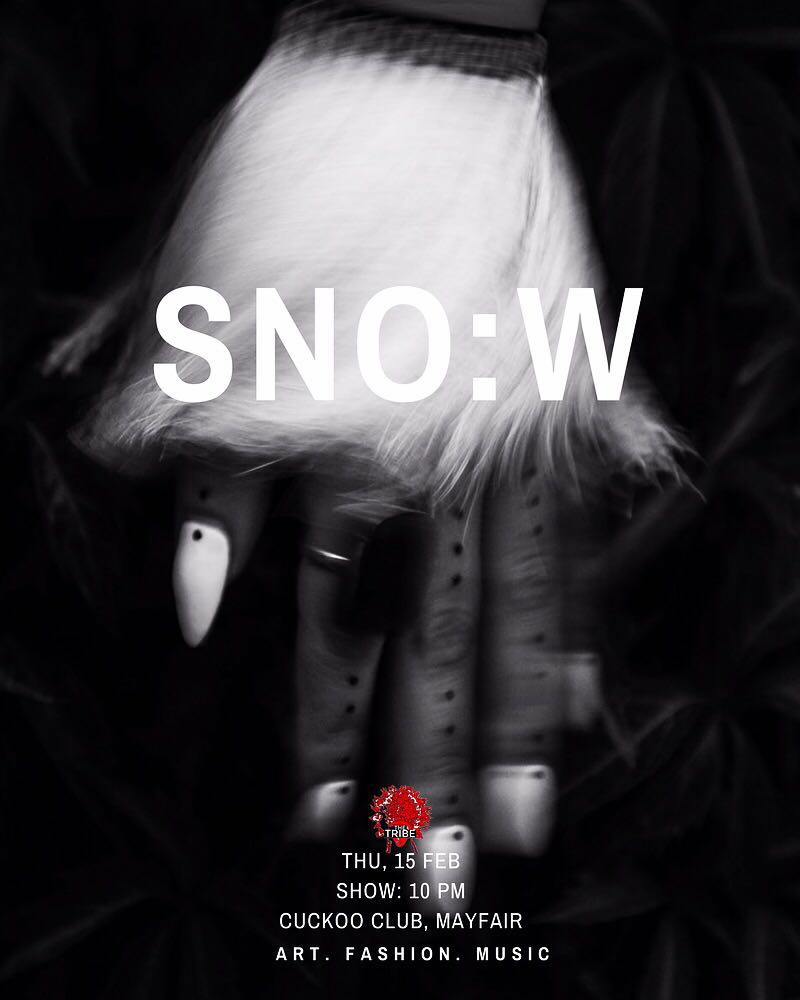 Art combined everything from doodling, live art, black-and-white  photography to photo colour splash techniques. The collection was dedicated to the artsy minds. Live art was performed by Evgenia Medvedeva and accompanied by the dance of Jonathon L. Baker. The paintings were by an artist named Lampros and Miss Medvedeva.

The event was hosted by an organisation that is full of inspiration for its audience, THE TRIBE. The main driving forces and key components of THE TRIBE are art, fashion and music.

As it says on its website: “THE TRIBE was born out of a passion to bring about a change for creatives around the world.” The company invests in creativity and talent by collaborating and exchanging knowledge. It also helps its audience to develop creative thinking.

Mauria Fransishku is the CEO of a London-based social enterprise, I AM LDN and its two active projects: #CEOCOLLECTIVE & THE TRIBE. The aim of THE TRIBE is to help creative minds succeed in finding employment by showcasing their talents and connecting creatives with the right people.

THE TRIBE has been successful since its pre-launch in April 2017: it receives an average of 15 membership applications per month. The organisation has so far facilitated a total of 50+ paid opportunities, internships or work placements. I AM LDN was also nominated for the Social Value Award 2017 in three categories out of four. Finally, their CEO received a Rare Rising Star Award in the House of Parliament.

Today there are 112 members of THE TRIBE, with participants ranging from 18 years-old to their mid-30s. A team of young multinationals contribute on freelance, voluntary or part-time basis.

Even though SNO:W was mostly focused on fashion and the models’ catwalk, there was a lady that particularly caught our attention. The name of the girl dressed in a white Russian ‘ushanka’ hat is Evgenia Medvedeva and she is a multi-dimensional creative, artist and womenswear brand owner. With a set of creative and artistic skills, and also an experience in organising fashion events, Evgenia is also a creative director at THE TRIBE.

Currently a student of London College of Fashion, she has already created Haute Couture collection that was featured in Italian Vogue. Evgenia, or simply ‘Jenya’, was then the one to receive invitations to take part in Paris Fashion Week as well as minor independent fashion weeks around the world.

When asked whether she enjoyed taking part in the SNO:W show, Evgenia answered that she sincerely enjoys everything she is committed to. “Otherwise, there wouldn’t have been magic, which makes you wanna stop and watch and then talk and talk about it afterwards,” she tells us.

Even though it sounds inspiring, being an artist is a tough challenge for those who are dependent on the audience opinion. However, Evgenia found the right way to deal with criticisms – she just tries not to set expectations because setting expectations limits opportunities.

The artist is aware of how many things she has to work on before the show: artistic vision, choreography, music and lights. And, if everything seems to be well, prepared for the big event, nothing can distract Evgenia from pure beauty and art. Evgenia is then ready to give all her energy and creativity to the event and present it with all the love that she has for her audience and her job.

Inspired by Maurizio Anzeri, Sophie Derrick, Chaim Soutine, and the vibes around her, Evgenia creates a special kind of art. This art represents a graphic reflection of how she feels at the time of the drawing. For the student of College of Fashion, the whole process is a meditation. It allows Evgenia to get into the abstract world of lines or colour splashes, that shape her current energies. 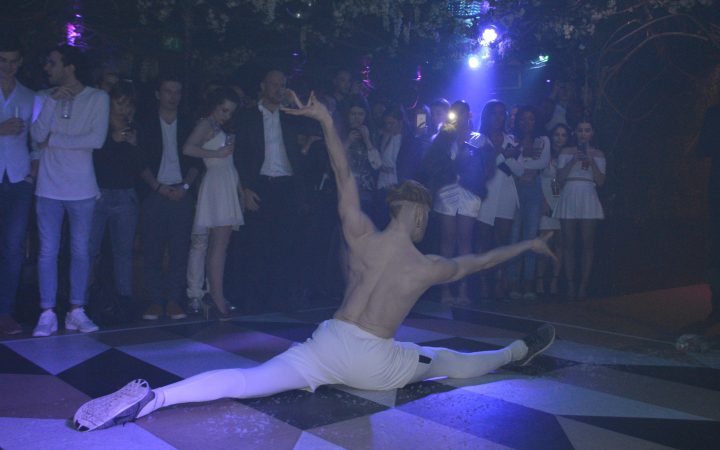 For every creative person, it becomes a mission of his life to find recognition in his audience.  After her works were featured in Vogue Italy, Evgenia was simply happy and grateful that her creation found a response in the world. “I felt like the world believed in me and took it as a sign that I have chosen the right pathway,” she says.

The main question we wanted to ask Evgenia is why she prefers to draw on people, instead of a classic canvas. “I don’t draw over photos of nature because nature is divine and its energies are clean. I seldom draw over objects because they are static.” For Evgenia, people’s energies are imperfect and flexible and she likes to think she is, subjectively saying, fixes them.

Talking about her future plans, Evgenia tells us she has an ambitious aim for life – to help people find harmony within themselves through fashion and art. The artist’s other aims include exploring and spreading the knowledge about the reshaping capability of fashion and art.

Valentina Bulava, the SNO:W Collective Head Model and Fashion PR, was invited to take part in the show by Evgenia Medvedeva. Valentina, who holds a title of Miss London Galaxy, has already had an experience of working with THE TRIBE before as she modelled in an earlier preview show RI:TUAL. This experience was quite pleasant for Valentina, as she loves working with such professional and interesting people.

Valentina Bulava was cheerful and active person, despite the tiring rehearsals that take hours or days, and she is always happy with what she is doing. Miss London Galaxy is absolutely confident with the fact that all the preparations for the show are always worth it.

Talking about her work, Valentina tells us: “What I like is that it gives you an opportunity to meet new people, spend a good time with friends, improve your skills and also share your knowledge and talent (if you have some).” Thanks to her work and her lively character, Valentina was lucky to meet many new friends.

After the SNO:W, Valentina received only positive feedback from her new friends. She was also lucky to be spotted by some of the designers and photographers who told her they would like to work with her in future.

The head organiser of the event, Mauria Fransishku told us: “SNO:W has received an outstanding feedback from guests, participants, sponsors and supporters. Luckily, there were lots of new interested sponsors to support THE TRIBE’S next coming events.”

And they have a new event soon, but the details are yet to be announced. Watch this space.

Featured image by THE TRIBE I AM LDN LTD.