The village from the high street

In a world ruled by what we simply call technology, there is a place where time seems to have stood still for hundreds of years. Located in the heart of busy Bucharest, this place looks like a gate to another world, a realm of peace and freedom where nature takes the place of technology and becomes the main source of life in all its aspects.

The village from the high street, as it’s known, encompasses hundreds of households, two churches, a fishery and constructions that nowadays would seem at least odd in our society, such as an old-fashioned whirlpool or a gold ore hydraulic break.

All these represent the culture and traditions of Romanians, simple people who could build houses, breed animals, till the soil and produce cereals, harvest food, shape clay, weave, and decorate their houses in a way that confers them a unique identity.

As I entered the village and walked down the path, I was stunned to see the multitude of different houses – some were made of wood and stone, others were made of adobe with roofs coated in moss, but none of them looked like the other. However, all of them were protected by gigantic hand-crafted wooden gates engraved with traditional motives. 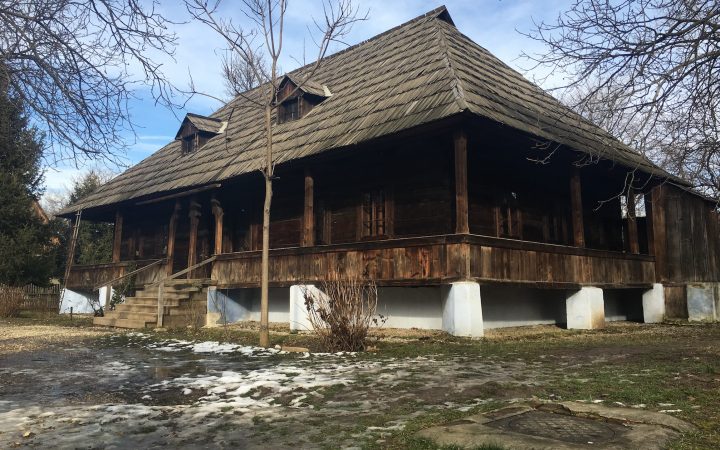 The first house that can be seen is built on a high stone pedestal, having a porch with pillars and railing on three sides, with walls of fir planks, joined on the corners in dovetail technique, plastered inside and a high roof in four slopes covered with fir shingles.

The stone foundation not only protects the house from flooding but also helps to keep a low temperature in the rooms at the lower level of the house, which was used to deposit food and barrels of wine.

Also, wood is a material that was used by richer people at the time, distinguishing them from the lower-class people who would build their homes with a mix of soil, water, hay and manure, which was shaped into bricks and let to dry in the sun.

Judging by the size and the architecture of the house, it might be correct to assume that its past occupiers were at least middle-class peasants. 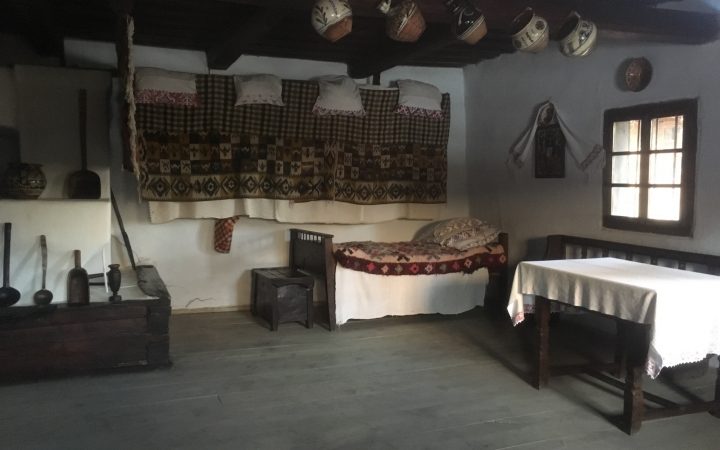 Inside the wooden house [Andra-Maria Ciupitu]

Also, the objects inside the house bear witness to the Romanian culture: low furniture (bed, table, bench), positioned beside the walls in order to create optimal space for household activities, hand-made clay pottery with traditional motives.

Back in the day, weaving clothes or decorative rugs, such as the ones that can be seen hanging on the walls, was a custom for women.

Nowadays, the only places where all these can be seen is at the countryside in some parts of the country, where the modernisation hasn’t taken place at a big scale yet and the youngsters have moved to the city, leaving their elders behind, who continue to live in the same old-fashioned manner. 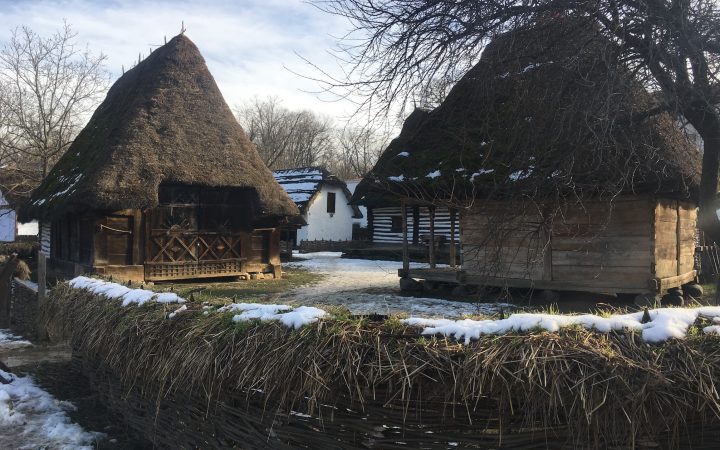 The houses used moss in their roofs [Andra-Maria Ciupitu]

The nearby household is completely different from the first one, starting with the architecture and ending with the materials that were used. It comprehends a house, a shed and a food storage, all made of wood with roofs covered in moss and hay, while the fence is made of beautifully interlaced twigs.

The high piles of hay covered with moss that was used for the roofs act as one of the best thermo-isolation material that could be found at the time, protecting the house from humidity and also keeping a constant temperature. While the landscape is a sight for sore eyes, bringing the onlooker closer to nature, it also shows how nature’s resources were put to better use in the past in comparison to now.

The occupations of the people who lived in the house can be observed by looking at the objects around the household, which gives an idea about the main activities carried out by people at that time. 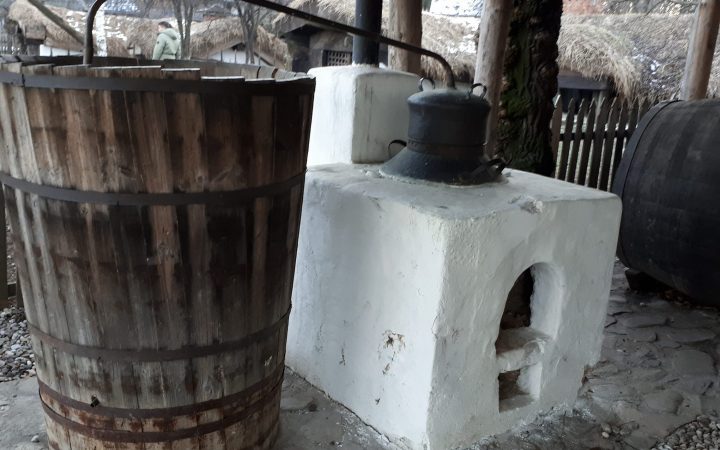 This was used to make alcoholic beverages  [Dana Sandu]

On one side of the house, there can be found an old-fashioned oven that is linked to a barrel through a pipe, which is attached to a cauldron. This was used for making two traditional Romanian beverages: țuică and palincă, which would be consumed on special occasions or offered as a welcoming gift to the guests.

The way it works is simpler than it might look, all you need is fermented fruits, most often plums, which would be boiled in the cauldron. The steam from the fruits would then go through the pipe, transforming it into liquid and offering the final result.

Making these beverages is a tradition that has been taking place since ancient times in Romania, and it still continues to this day.

Next to the house is a wooden table with two hollows: a rectangular one, where the cereals were put, and a circular one, where the housewife would make mush or bread, which were consumed on a daily basis. To this day, no Romanian dish would be served without bread. 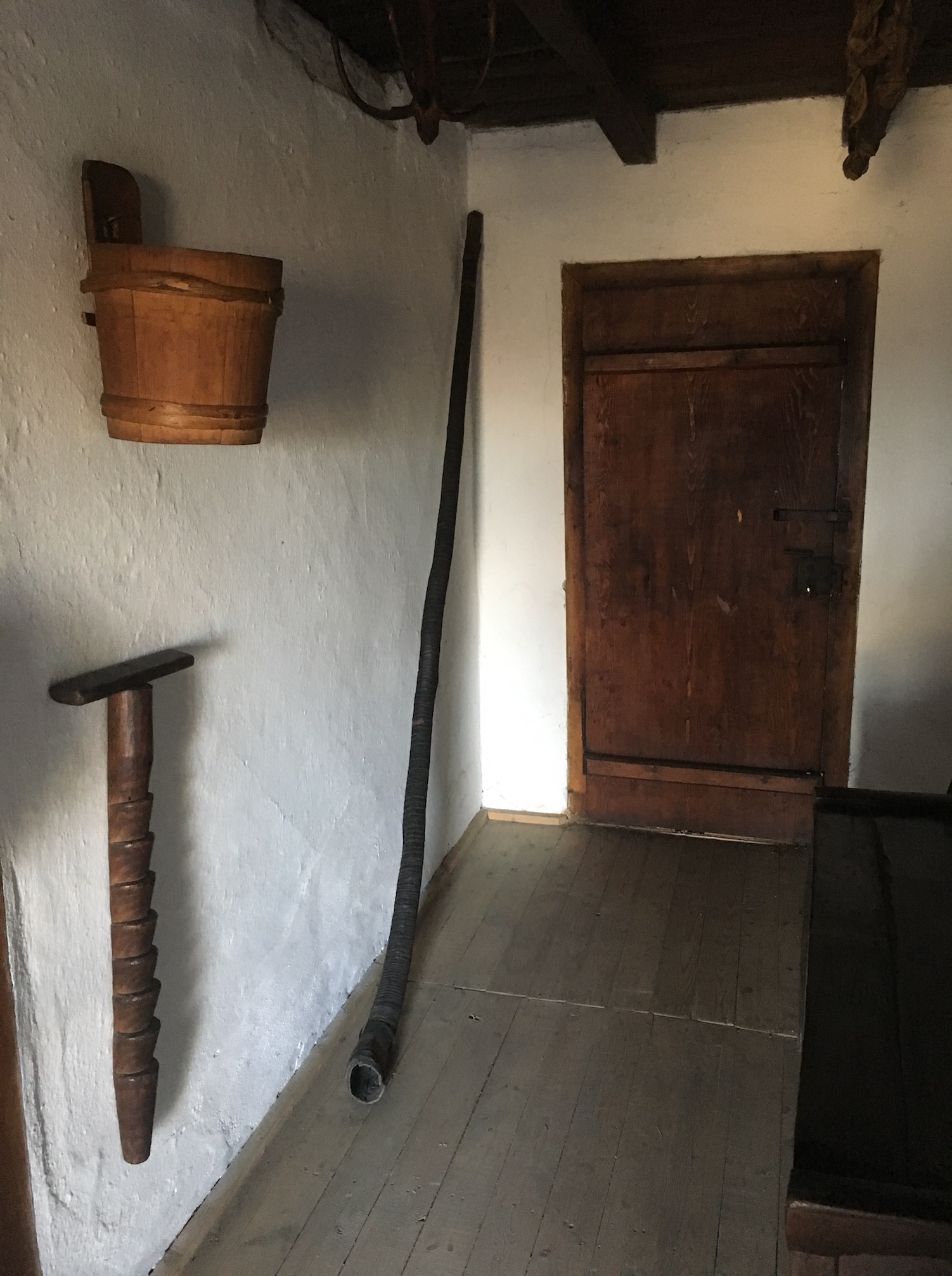 A device for cheesemaking and an alpenhorn [Andra-Maria Ciupitu]

Entering the house uncovers other secrets about its past occupiers. On the wall on the left-hand side of the hallway is a T-shaped wooden object, which was used for making cheese, an activity that is still carried out in the present by people who live in the countryside.

While its length allowed the person who used it to stir the cheese, which was kept in a special barrel, the ribbed side of it is what made the cheese soft and was also used to grate it afterwards.

Next to it is an alpenhorn, another authentic object in the Romanian folklore, as Romanians have music in their blood: whether it’s a dulcimer, a whistle, an alpenhorn or even a leaf, they will find a way to make it play.

The following room served as a kitchen, as the old-fashioned fireplace can be observed in a corner surrounded by cast iron pots and cauldrons, and also wooden dishware. 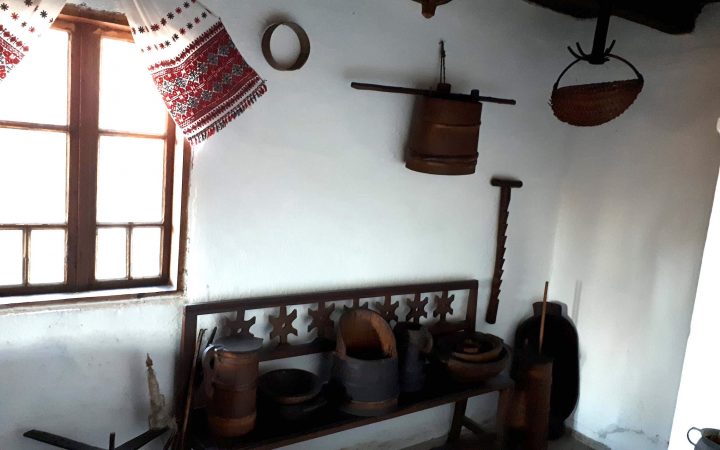 Handcrafting wooden objects is a custom that gets transmitted from generation to generation, which nowadays continues only in some parts of the country.

However, handcrafting cast iron or other metal objects is a tradition within the gipsy community, who used to travel in caravans from village to village and sell their goods to Romanian peasants.

To this day, traditional gipsies still support their living by selling cast iron pots in markets. 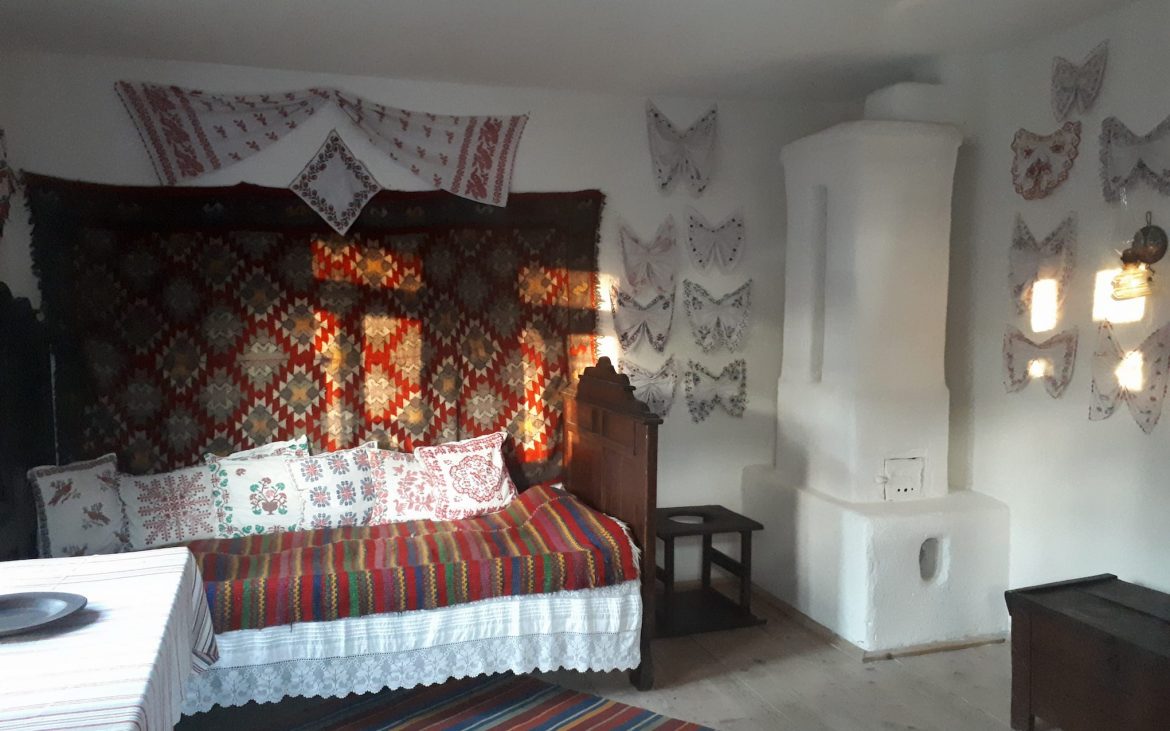 Not too far from the house is the church, with an imposing spire going up to 35 m height. It was built in 1722 by replacing another, burnt down by the Tartars (nowadays’ Turkish) on their plundering raids in 1717.

The peasant craftsmen – native architects – succeeded in lending it a supple and slender form by interrupting the roof both vertically and lengthwise. The inside walls were also painted by peasants, whose imagination was used freely to mirror folk beliefs and superstitions of that time (happiness in Heaven and tortures in Hell), specific to Christianity. 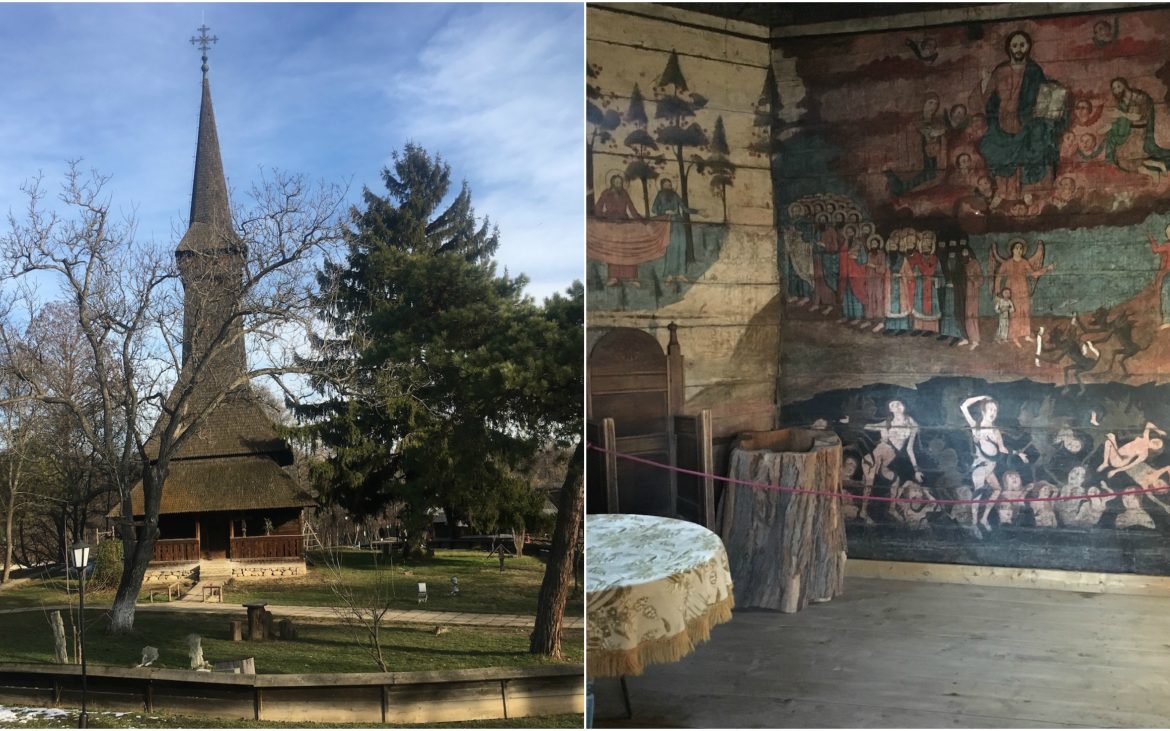 The church is a focal point, and filled with art [Andra-Maria Ciupitu]

Nearby, 15 minutes walking distance from the church, there are two half-buried houses, dating from the 19th Century. For the walls and roof structure, it was necessary to find a significant amount of oak, which suggests that these half-buried houses were not housing for poor people, for its construction being required almost a double the amount of wood in comparison to the amount used for the construction of a house above the ground. 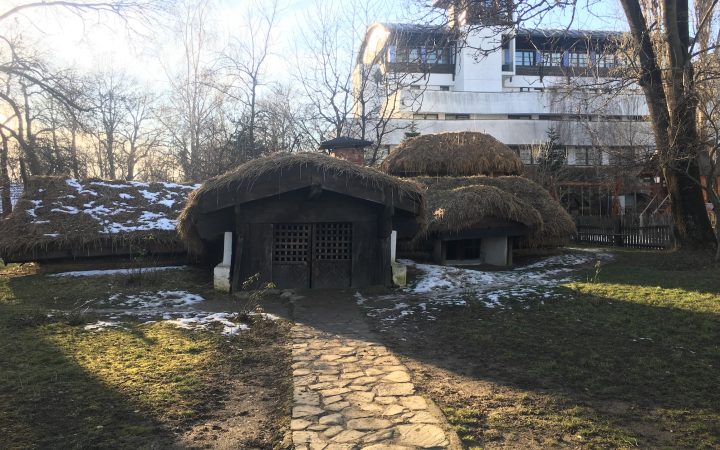 At the entrance of the half-buried house two purlins with outer heads carved in horse head shape protect the living place from dangers and evil spirits, according to the myths.

However the reasoning behind the constructions until the first half of the 20th Century were not only the harsh climate with strong winds and large temperature differences between summer and winter (the half-buried house being a housing that preserves the cool in the summer and warm in the winter) but also the constant Turkish raids and the strong origins of the traditions.

Not far away from the half-buried houses is the lake, on which shore there are a fishery and also installations such as a pestle stamp for crushing gold-bearing ore and an old-fashioned whirlpool.

The simplest hydraulic device to process large woollen fabrics, such as rugs and counterpanes, is the whirlpool or eddy, having the shape of a truncated cone, with the wide basis in the upper part, placed on wooden circles.

The water flow, directed through a slanting groove, reaches the whirlpool with great speed sideways, making the fabric spin around, and after 15-20 hours of rotations in the whirling water, it becomes thicker and fluffy. The device is also used to washcloths, and in fact, it is on this principle that modern washing machines are conceived. 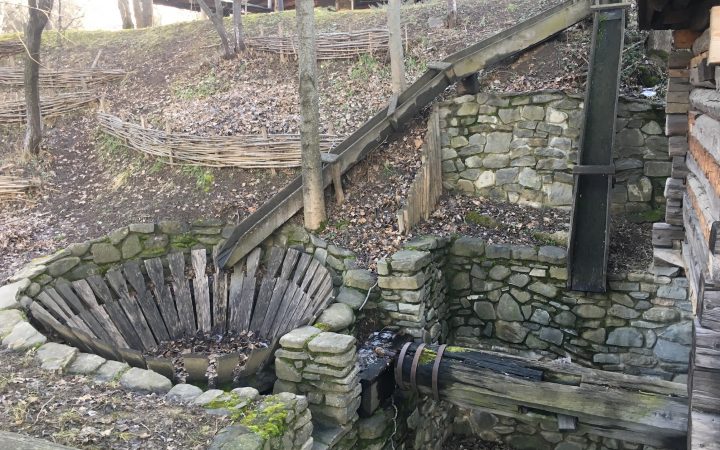 The pestle stamp for crushing gold-bearing ore is an installation that was needed in Romania until 1948 when the socialist nationalisation took place.

Before that, gold digging was an ancient craft. Participating in the gold digging activity were all members of the household; men would do the hard and most demanding work: taking the ore and panning gold, while transporting it from the mine to the pestle stamp, the pounding of the core in the pestle stamp, the grinding of the concentrate in the hand grinding mill were all done by women, children and elders.

The hardest and the most lasting work was the pounding of the core in the pestle stamp: 24 hours for one load. 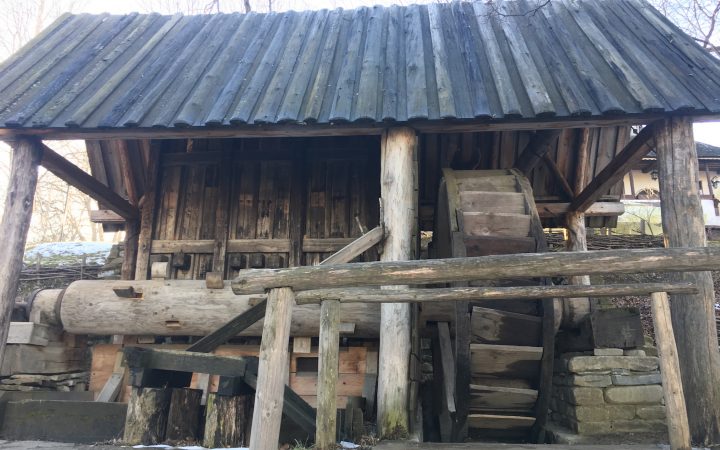 The ore was broken up into little pieces using the hydraulic brake and then ground in a hand grinding mill until it turned into a paste.

The paste was then washed with the help of a sluice box, a chest with a lid with holes and a slanting bottom to which were attached pieces of wool.

Finally, the grains of gold were retained by the fabric which was then washed in a tank until the gold remained at the bottom.

The last element that brings everything together is a horse-head fountain, which actually hides a well that is protected by a sloped roof with supporting beams carved in horse-head shapes.

An ancient symbol with apotropaic meanings, the horse head is linked to the cult of the Sun and is meant to protect the place from evil influences. All these stands as an eloquent proof of the millennial continuity of the Romanian nation.

A visit to a place like a village from the high street is like a walk through history, serving as a gate to two hundred years ago and also celebrating nature in a way our society doesn’t do it anymore.

Showing off pure Romanian culture, it is a national symbol that remembers the true roots of this nation and serves as a proof of the fact that some of their traditions are still continuing today.