The Final Curtain for The Coronet

The Coronet, formerly a theatre, was first opened in 1872 and has played host to countless performers, from Charlie Chaplin to Oasis.

What was once a famous landmark in the Elephant and Castle area, has more recently become a sad husk of its former glory, with the establishment officially closing its doors on January 1, 2018.

Until that is, a collective of rave sound systems decided that The Coronet needed to have one last (unofficial) send-off.

Squat-raves shares many similarities with a conventional nightclub experience, but one thing that usually differs between the two is location.

A squat-rave can be held in anything from abandoned offices to derelict warehouses, as the organisers are notoriously skilled at making a temporary home in almost any building, regardless of its previous intended purpose, in the name of a good party.

Squat-rave organisers are known as ‘Sound Systems’, due to the fact they bring all the equipment with them, including the nauseatingly powerful speakers required for a rave event. It is apparently very rare indeed that the opportunity to host a squat rave within a venue such as The Coronet arises.

Such a rare opportunity was not one to be missed, with many of the nation’s top underground sound-systems collaborating on what was billed as a night to remember.

There were more than five different sound systems involved in the event, most notably; IRD, Pokora, Nostrukture and Beserk, who are some of the most famous names in the game.

These sound systems decided that they would work together on what was described by one the DJs at the event as “a once in a generation party”. According to Killdren, another one of the performing bands at the event, the last time the Coronet was squatted for a rave was in 2000: 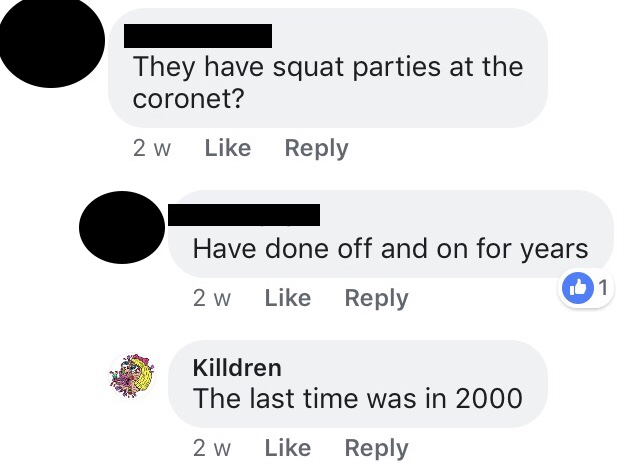 Another DJ on the night, who wished to remain anonymous told Artefact: “I said to a friend earlier that it would be so funny if it ended up being in The Coronet, all I knew was it was in Elephant and Castle, best location I’ve ever played at.”

Rave organisers are very strict about when information is released about a party, and often wait until the very last second before updating the ‘party line’.

The ‘party line’ is the name given to the disposable phone organisers use to let people know about the specific locations of an event, through the phones answer machine message.

Anyone who wishes to come to the rave, which has been marketed through Facebook, citing only London as the location, calls the phone number to get the specific details.

It is all very clandestine and secretive because if the police catch wind of it, not only could they shut the party down, but they could also confiscate all equipment, which could be worth upwards of £10,000.

Luckily for the organisers and those who attended the party, The Coronet rave was not shut down, and party-goers kept on raving until the afternoon hours the following day, over 12 hours of non-stop music.

However, with the smell of redevelopment and gentrification in the air, perhaps this will be the last hurrah for The Coronet. After the dust had settled and the ravers had left, the doors were once again shut, most likely for the very last time.