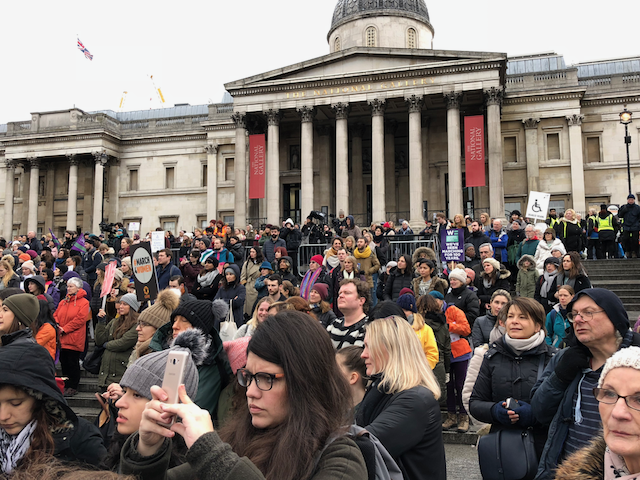 Walking out onto the cobbled streets from Westminster station, you are welcomed by glistening, puddled streets.  This all too familiar rainy English weather showers the landscape in a refreshing dew. The weather that day, on March 4, set the scene well for the Women’s March, celebrating the 100th year of women having the right to vote. It was also refreshing to witness the male support which was absent all those years back.

More than 5,000 people marched from the Houses of Parliament to Trafalgar Square. Even more still, 7,000 or so, gathered in Trafalgar Square to hear Sue Perkins introduce the diverse range of speakers, poets and musicians at the rally. Of course, the speaker line up consisted mainly of women, but Artefact was pleasantly surprised to witness several men showing support of the cause and embracing equality with their own speeches. This reflected the crowd,  men were definitely present and present in high numbers.

The main message highlighted by Perkins in her introduction was that it may seem that there has been a lot accomplished already (and there has) but there is still much to do not just in the Uk but the world. Gender pay gaps and free speech were mentioned to be big problems globally, this is where Care International comes in.

Care International run projects around the world that empower women to live, learn and earn, free from discrimination and violence. The very message that Care International are trying to convey with this event year by year is to give women a voice in places that they may not have a platform to speak out.

Without taking the focus away from women, it is interesting to understand the male perspective of feminism and equality in today’s world. Artefact spoke to a handful of male attendees, with the question: what made you come out today?

The talks began with Anne Marie Duff reading one of Emmeline Pankhurst’s most historical and inspirational speeches, ‘Freedom or Death’. Second, came Shola Mos-Shogbamimu, who started her talks by asking the men and women to make some noise, to which of course the women out-shouted the men. This reversed roles and placed the power in the women’s hands which was Mos-Shogbamimu’s intent, however, it must also be said that from the sound of it, the male turnout was huge, this is symbolic in the fight for equality, this time they have come to show support instead of resentment.

Historically the first suffragette march in 1908 was greeted by a great deal of male opposition not only by bystanders but also authorities such as police. Consequences resulted in the imprisonment of Christabel Pankhurst, and even a death. Emily Davison was killed by a King’s horse at Epsom Derby (1913).

Since then not only are men showing support but they are themselves campaigning for equality for all. Who else to demonstrate this than Sadiq Khan. The Mayor greeted the onlooking crowd with an introduction of himself as a proud feminist. Not only did he show support by speaking at the event and bringing further coverage to the topic,  he rightly pointed out that there was no woman statue in Parliament Square, so he revealed that leading suffragette Millicent Fawcett will be memorialised there. This felt like a real win for the women there but also the men, who were now on the right side of the fight.

The next speaker was Nazma Akter, a trade unionist and women’s leader from Bangladesh. Who gave an emotional speech about her experience of working in sweatshops since from the age of eleven. She beat the odds and began organising women to make a real change to which she was beaten and blacklisted; society was not accepting of a woman leader. This echo’s the suffragettes’ struggle while at the same time highlighting that equality has not yet been reached.

Akter has since become one of the foremost labour leaders in Bangladesh. But she had said that women are still making £50 a month for the cheap clothes they are making. She urged everyone to sign Care International’s petition calling on Uk fashion brands to protect these women. The event continued with Urban Voices Collective singing and the whole crowd joining in.

In terms of what the event felt like from a male perspective… As the five interviewees have revealed to Artefact, it definitely felt important to be there. It was an event which almost felt archaic surrounded by modern London. These changes to equality should have been resolved years ago, it’s crazy to think we are so advanced in other aspects of daily life but still lacking in this.

Another thing worth noting is what Kenal had said. It felt strange for a man to be at an event which addresses solely women. We are used to be in a society of patriarchy, where men are put as the protagonist in most stories, movies, etc. This is what needs to be balanced out across the board.

The March4Women concluded with the event organiser thanking the crowd for coming out while at the same time hoping not to have to repeat the event to many times. When equality is reached we will no longer have to march.

All images and interviews by Pavel Troughton