The drawing of a giant spider has been appearing and disappearing on the floor of Granary Square during the last weeks. This is the first stage of a performance project called The Disappearing Garden, in London’s King’s Cross.

This project, tailored to Granary Square – the flagship public space at the heart of the King’s Cross redevelopment – encourages the practices of drawing and cleaning to be done simultaneously, using water as the exclusive material for doing both.

An iconic element of the area – formerly known as The Granary Basin – is that water has shaped the place: in the past in the form of a water basin allowing boats to reach the Granary Building for transporting goods, today with four fountain bays occupying approximately a third of the square’s surface, and the Regent’s Canal bordering to the south.

This performance @disappearing_garden by Adriana Cobo and collaborators is part of Adriana’s PhD on Performance Architecture for Contemporary Public Space.

Adriana’s current work focuses on providing visibility to maintenance workers of public spaces. She aims to connect art and performance practice with the skills and insights gained through maintenance work, by designing collaborative projects.

Hers is a “critical vision about how notions of maintenance and cleanliness in public space, affect the ways in which the urban public realm is designed, managed, perceived and experienced”, she says.

What happens when drawing with water?

Adriana and her collaborators construct water-drawings scaled to Granary Square, using cleaning machines and architectural techniques to make them.

When drawing with water, images disappear rapidly by evaporation. “Except video and photographic documentation, nothing remains on site after our interventions”. When the ground or surface is cold, evaporation takes longer. In Granary Square, drawings evaporate every 15 to 18 minutes in winter, and roughly every 6 minutes during the summer, when the floor remains warmer.

“My project has a very strong reference to Oscar’s work”, she explains. Adriana is influenced by the work of Colombian artists Oscar Muñoz, who is based in Cali, the same city where Adriana was born. Muñoz, one of Colombia’s most recognized artists, paints portraits with water. During the making of these portraits, water traces constantly disappear due to evaporation, forcing the artist to continuously re-trace the marks on the surface, often stone.

Where does the title Disappearing Garden come from?

This title is somehow romantic and metaphorical at the same time. “The initial idea was to represent distinctive flora from each of the countries of origin where most collaborators come from (both maintenance workers and CSM students have diverse international backgrounds). Drawing a garden which constantly disappears, could resemble ideas and memories of home, a kind of paradise lost. Additionally, the square is a place with not much vegetation, so we could at least imagine how would it be if it had more.”

The spider is the first drawing they have chosen, proposed by collaborator Benjamin Gonzales. Adriana explains that “it is as if we were zooming into the garden. As the project progresses, we will slowly zoom-out to end with a smaller scale view of a garden, and perhaps with other viewpoints”.

The title has a metaphoric component because, she adds, “notions of public space have been dramatically transformed over-time, and especially within the last decades. It is a comment which touches on this transformation.” 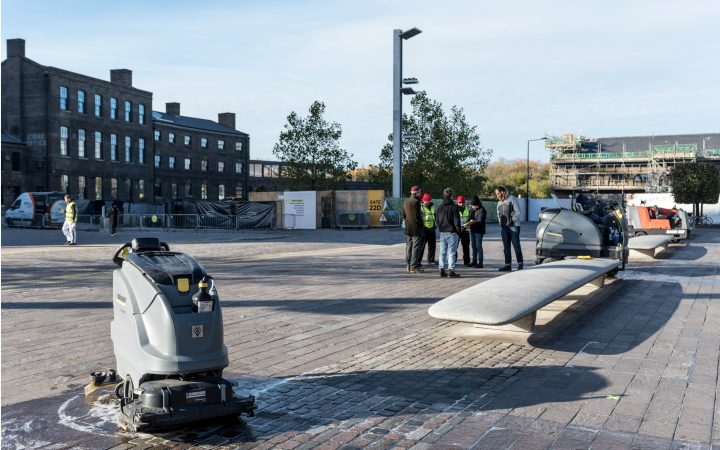 What tools do they work with?

They use ride-on and pedestrian sweepers operated by specially trained cleaners, as well as normal domestic sponges and brushes, used by the architecture students. These are not precision tools for drawing. So instead of struggling with the fact that drawings can’t be detailed, Adriana and her team take advantage of this: the garden will be more abstract rather than meticulously drawn.

Where is the performance best perceived from, and who collaborates on it?

The drawing itself is perceived better from above. That is, from the CSM library, located in the Granary Building, flanking the square. Adriana explains that due to their large scale…” when we are working on the ground, we cannot really see the drawings we are making”.

Therefore, what can be seen from the ground is how the performance and making of the drawings take place, with an emphasis on individual movements and the overall choreography.

Maintenance workers from Kings Cross Estate Management (KCES) – Environmental Services and Students of the MA Architecture Programme at Central Saint Martins are the project collaborators. Although Adriana directs the project, they all participate in the conceiving and crafting of the drawings, both through workshops and conversations, as well as on site.

What is the purpose of this project?

She confesses “I could be considered part of this group”, a very specific public, including Central Saint Martin’s students and staff. Adriana adds;” If you look at Granary Square on site, online, etc., you will see a specific kind of user, affiliated with a desired ideal public for the place. A blend of middle class and ‘trendy’ groups, related to academia, the arts and fashion worlds… an exclusive public.”

Adriana goes into detail: “For diverse reasons, some of them sensible other not so much so in my view, clean public spaces are usually perceived to be safe and welcoming. In any case, maintaining public spaces is key, but it does not enjoy a fair share of acknowledgment or visibility… I work thinking about maintenance workers as aesthetic agents on site.”

Maintenance staff work hard to keep the public spaces impeccable, with daily 8-hour shifts mostly outside. Additional to cleaning, other maintenance groups do repairs, gardening, surveillance, etc. These groups constitute a maintenance system usually located at the backstage of public spaces. These are the “agents” Adriana wants to provide a platform for visibility for, following the steps of Mierle Laderman Ukeles, who she calls “the absolute queen of Maintenance Art”.

How long have you been working on this project, and how long will it go for?

The negotiation of this project started in June 2016, with full approval granted by October 2017. On-site rehearsals started last November. The project will end with a final performance this October, in the context of The Big Draw 2018.

Rehearsals and test-runs can be seen from the ground, as well as from the Granary building – CSM Library, on Mondays the 12th and 19th March, from 9:00 to 11:30 am. With further dates for April, June and September TBC. 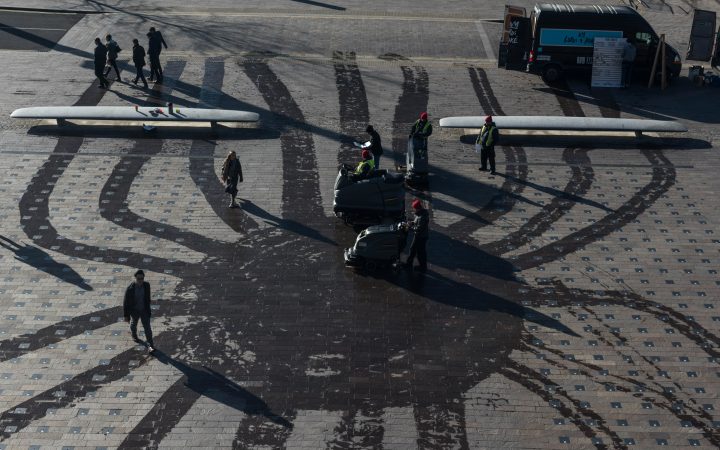 Adriana’s project is subject to certain conditions. The first is that maintenance workers would like to be involved in the project. Rehearsal times, as well as workshops and interviews, are scheduled during their regular work shifts and are paid as normal working hours because, she argues, “… at the same time we are drawing, we are cleaning. What happens is that they are leaving a trace of water behind, on the floor, which we consider a drawing. But we are also cleaning together, just following a slightly different protocol than usual”.

She continues: “The workers and their employers have been very generous. I initially told them I could put the project together with three rehearsals on site and a total of 18 hours of work per worker/collaborator. We will definitely do more than that, and they are happy with this, very keen and involved with the project.”

Adriana has interviewed the workers and their bosses made drawing workshops together with workers and students and developed a two-way dialog in order to imagine and craft each drawing. “They are incredible!, I am very lucky”

From the Kings Cross Estate Management to the workers collaborating with the project, an easy and cooperative work environment has been developing over the last four months. Working on the ground with the sweeping machines’ operators and the MA Architecture students have been a pleasure. “They are interested, and always ready to add helpful insight to the work,” Adriana concludes.