Revealing the colour of madness 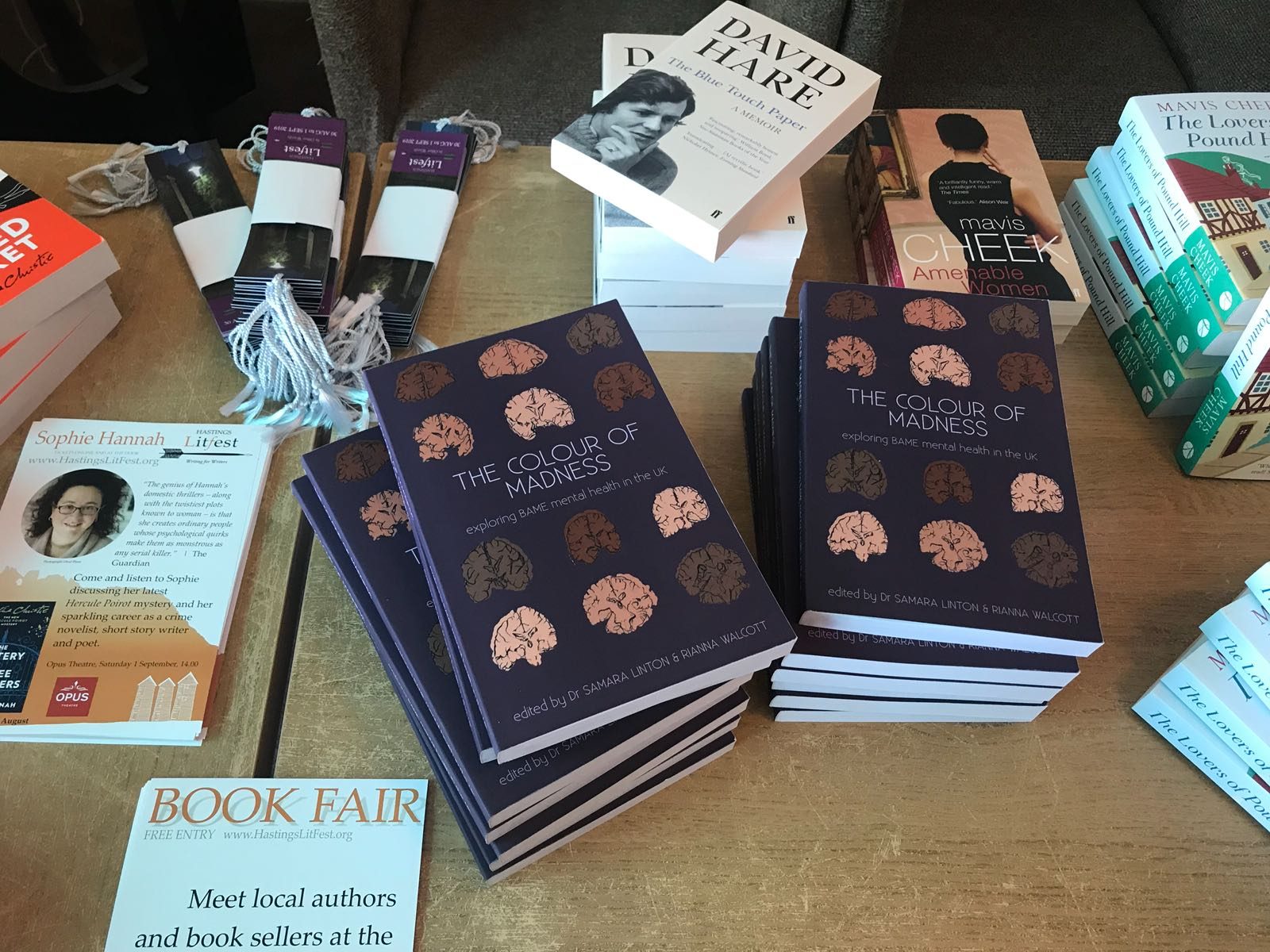 Ph.D student Rianna Walcott was giving a talk on mental health to the creative industries in Edinburgh, when a woman approached her with an idea for a project around the mental health issues in the Black, Asian and ethnic minorities.

There was only one problem: the woman was white: “You’re going to need a black or brown woman to go ahead with this project and I think I know the one for you,” said Walcott, who was  interested in the idea. She was thinking of her school friend Dr Samara Linton, a Jamaican-born medical doctor and a University of Cambridge and University College London graduate.

Walcott’s interest in the idea was so great, she decided to co-edit the book The Colour of Madness: Exploring BAME mental health in the UK, that came out of the study. 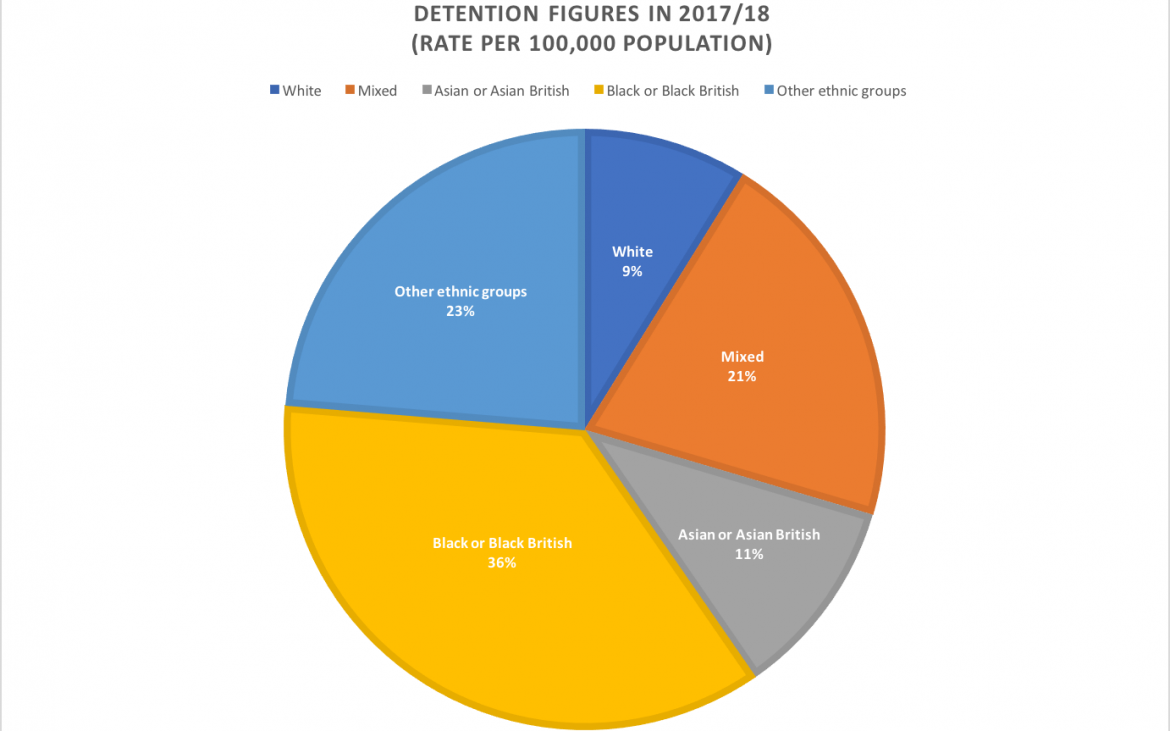 We spoke to Rianna, who is a doctoral candidate at King’s College London; the book she co-edited features poems, fiction, essays, memoirs and art submitted by people who are a part of the Black, Asian and Ethnic minority community who have suffered, or are still suffering with, mental health problems.

The first challenge was to portray such a wide community: “We have tried really hard to get a representative from a cross section of BAME people – various ages, races, religions, classes. That’s been a huge focus in the way we have done the book, in editing lightly enough that their voices are still very true to who they are.”

Published by the small independent company Stirling Publishing Ltd in September 2018, the book has already proven to be a huge success. The initial print run of 300 sold out almost immediately, and it’s already on its third print run in the first month, strong evidence of how vital it is to share the voices of those who are otherwise suffering in silence. 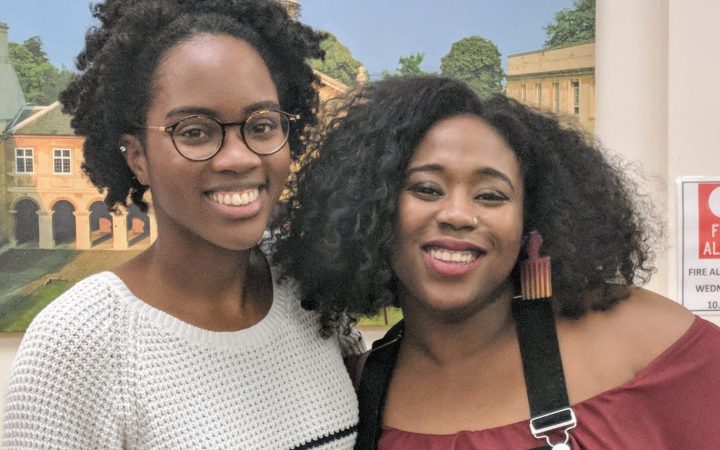 Figures from the 2014 Adults Psychiatric Morbidity Survey found that Black adults were found to have the lowest treatment rate of any ethnic group, at 6.2% (compared to 13.3% in the white British group). This is a problem that has been around for a significant amount of time now and is one of the many things that pushed these two young editors to start putting together this incredibly strong and powerful collection of inner thoughts, feelings and experiences.

As the topic of mental health has always been highly sensitive, it would be difficult to find people to open up about their problems. However, the authors found it surprisingly easy to identify people willing to open up about their personal experiences. “People were very forthcoming and incredibly open about sharing moments that are incredibly vulnerable,” Walcott told us.

“We do have a few people who are anonymous in the book, because it might still be taboo in their culture to talk about it or they’re discussing incredibly difficult concepts like self-harm, but for the most part everyone was really glad to have the opportunity to speak,” Walcott explains. “I think a lot of people have been holding onto this stuff for a long time and not had a venue and I know for myself it’s been incredibly freeing to be able to talk openly about stuff like this.”

Looking at social media, it is clear that there is much more awareness and a bigger conversation surrounding mental health, with hashtags including #mentalhealthmondays #suicideprevention #selfcare etc. While it only goes so far as to help bring awareness, it is something that has increasingly helped to start the conversation around these problems.

Walcott uses her 19-year-old sister to illustrate as an example of this: “Things inside the BAME community and outside of it are changing. I think as a conversation it’s being led by young people. As an example, the way my sister’s generation talk about mental health is so different to the way that I did when we were growing up and I think that has to be born out of a new confidence on social media. Things like Tumblr awareness, whatever you think about it or not, is definitely meaning that these conversations are more accessible to people.”

Looking back at the detention statistics release by NHS Digital, there are many issues about the number of detentions in the BAME community, specifically those who are in the Black and Black British community. When questioning Walcott on why she thinks the figures are far higher than the White British community, she says, “I think a large part of it’s because the services that are intended to help us are not really suitable for BAME people.” 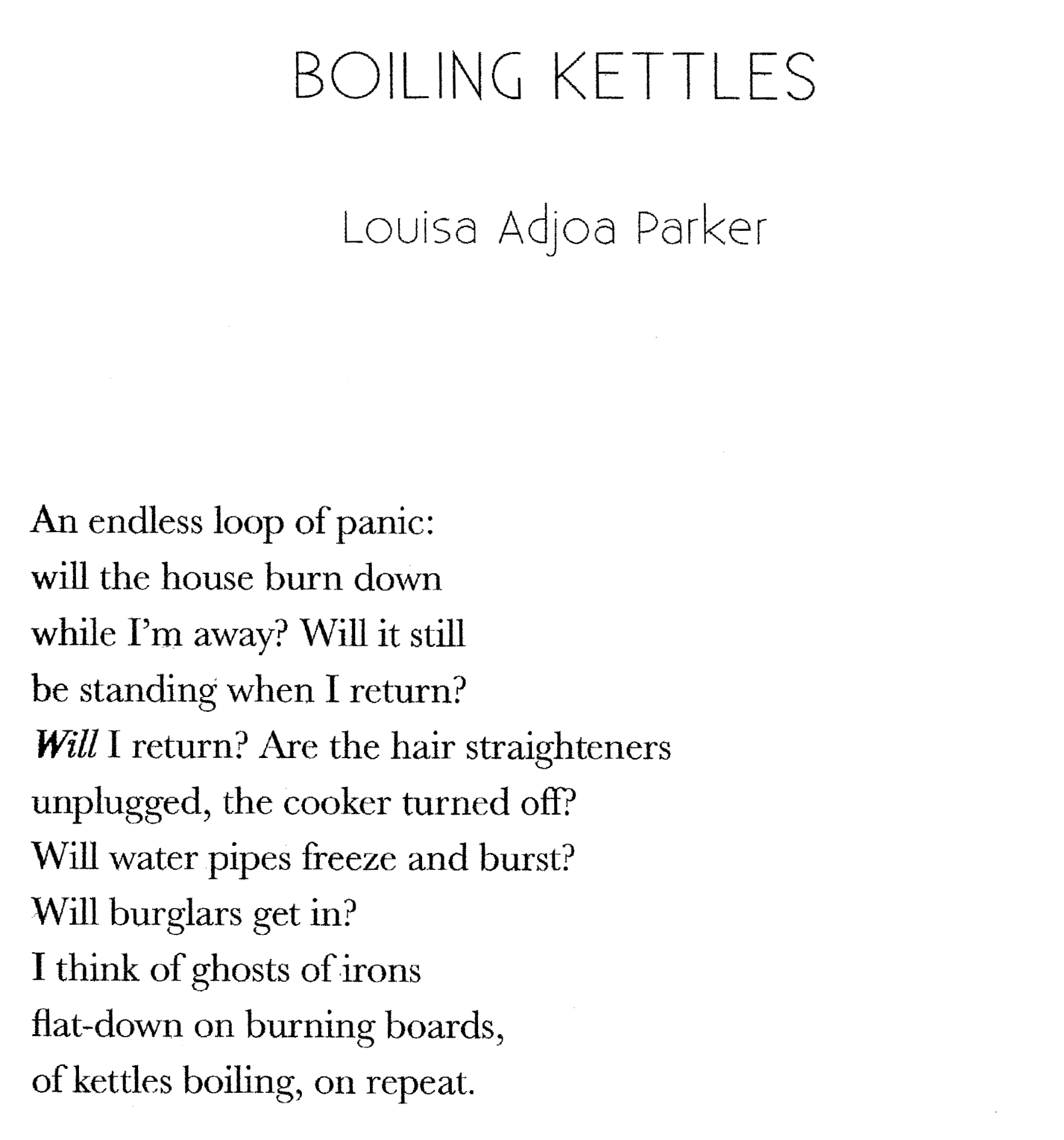 Excerpt of a poem from The Colour of Madness [Poem by Louisa Adjoa Parker. Illustration by Nenah Patel]

“My own experience inside healthcare has been pretty shit and I’m one of the most privileged categories of BAME people,” Walcott says. “I’m a black woman sure, but I’m educated and I’ve been exposed to it through the university healthcare services and still had a shitty time, so then what happens when you’re BAME working class, not university-educated and you’re trying to access these services? They’re going to vilify you.”

“I’m particularly thinking about how disproportionate the figures are for black men who are institutionalised and medicated against their own will and seen as a danger to themselves and others” Walcott explains. “The fact is we have higher incidences of mental health problems like schizophrenia and things that could’ve been treated earlier, but then go unchecked and then develop into more serious conditions.”

With these problems not gaining enough attention from the BAME community, where should we start in trying to tackle these mental health issues that are being pushed aside as they wait for them to get worse? Linton and Walcott have many plans for this anthology and with the amount of attention it has already received by the public, those plans can be and have been achieved much quicker than expected.

“Samara’s ward ordered copies and there are places that are putting it on their required reading lists,” Walcott explains. “It’s getting into the hands of practitioners and policy makers, which is important. We also want to get it into community centres where BAME people are frequent, because there is no point in putting it in therapist’s office, because not a lot of people can afford therapy. The point is to get it into religious centres for BAME people, community spaces etc. Get it on reading lists for practitioners and policy makers and then also making sure it gets into the hands of people who are maybe suffering in silence.”

“I didn’t know that therapy could even be for me until two years ago,” Walcott says. “I always just thought of therapy as something that white middle class people did. Now I think of therapy as something that is as necessary as going to the dentist or the doctor. It’s a part of my health that I need to work on and maintain the same way I would with any other part of my health.”

University is the first port of call for students seeking help and it is vital that a university’s support systems offer the right amount of help and support. However, in June earlier this year, the Office for National Statistics released the estimates of suicide among higher education students between the years of 2001 to 2017. The figures show that the suicide death rates of undergraduate students are significantly higher between the ages of under 20 to 24 in comparison to the ages of 25 to 30 and above. Though there is a difference between the ages, the figures are still fairly high and continue to raise concern for the mental wellbeing of students in the UK. 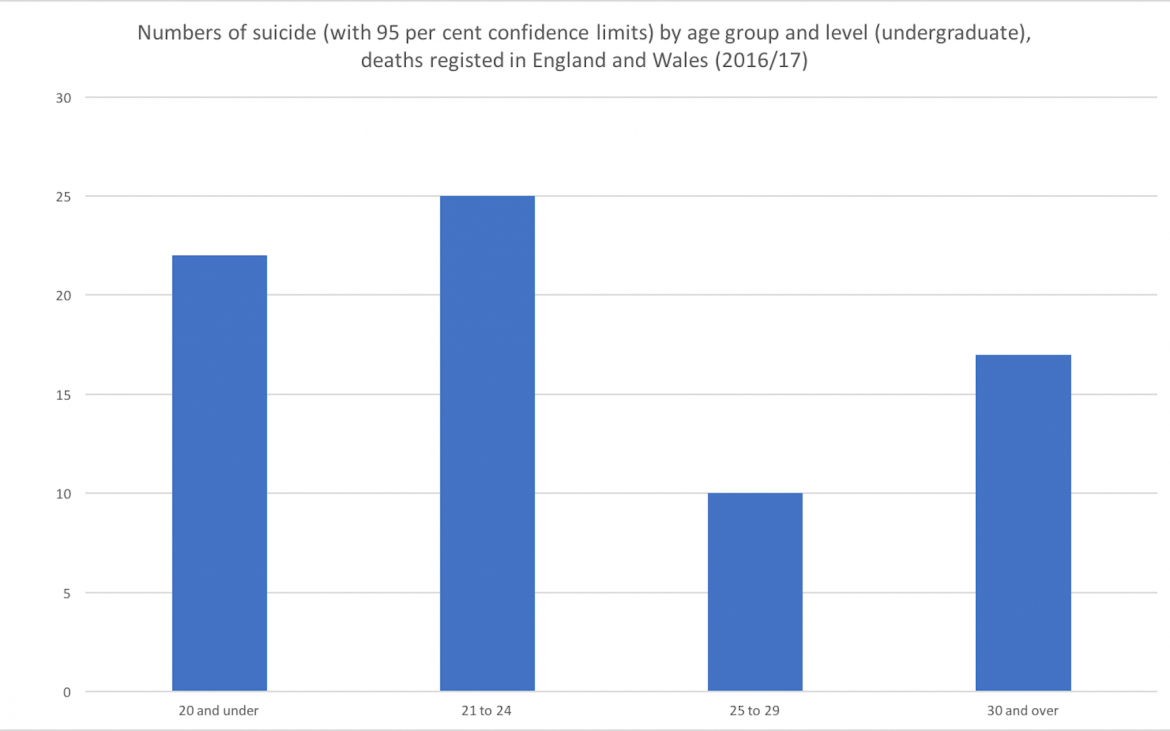 Looking into the BAME community, this help may not be as accessible and Walcott explains as she says, “All university healthcare that I’ve been to, have been massively overstressed. I think in that case, we need to look at the culture in Universities around mental health, because at the moment, they’re just putting a Band-Aid on the problem.”

“The culture of stress and the culture of achievement at most academic institutions is all wrong and people feel that if they’re not depressed, then they’re not doing it right. That’s the first port of call for making things like that better,” Walcott explains. “I also think that University health services need more BAME counsellors, because depending on where you go, myself being up in Edinburgh, there weren’t any and the care that I got was bad as a result.”

“We also need to look at the ranking of them as well, because it tends to be that when you have a BAME person they’re just healthcare advisors, they’re not counsellors,” Walcott says. “So, the chance of reaching a BAME psychotherapist is slim. There are not enough people in that field so we have to look at recruitment and things like that too.”

The Colour of Madness expresses these raw emotions and turns them into forms of art, in a time where it is very much needed. In doing so, it brings more people wanting to contribute and wanting to share their own stories and experiences. In a time where awareness is growing rapidly, it is vital that all people gain from that conversation.

Walcott expresses her gratitude for the amount of love and attention the book has seen since its release: “I’m glad that it is sparking a discussion. It’s very flattering to see how well it’s doing because It tells me how much this was needed and we have talked about having these books back in the Caribbean and different African countries.”

“There’s also an interest in an American version, because when we first started finding contributors, we had a lot of American BAME contributors, but the book is obviously focused on UK mental health so we didn’t want to put them together because they have a whole other system, so we didn’t want to tangle the two,” Walcott admits. “We’ve also talked about a youth version because we think that an area that is definitely overlooked is the fact that these issues do often start in your teens. They think it’s because of hormones and puberty and it’s like no, sometimes it can be a lot deeper. There are a lot of plans, but nothing set as of now.”

Alongside finishing her Ph.D in digital humanities exploring black digital communities, Walcott is also running a project called Myopia, which is about “decolonizing and diversifying university spaces like education status.” With the book, her Ph.D and her projects being around BAME culture, mental health and community, Walcott is highly passionate and believes that this area of activism is where she truly belongs.

As the topic of this book is something that hasn’t been written before, just looking at nearly 1,000 copies already sold in the first month, it is something that was very much needed. Not only for the BAME community, but also for practitioners and the general public – to educate them on these current issues that people are still facing in the 21st century.

The Colour of Madness is available on Amazon.