With the flea market on site bustling with people looking through various stalls of trinkets, books, and artworks, I met drone musician Zeyn Mroueh, on a fairly sunny Saturday afternoon at Flat Iron Square. The 26-year-old from Cyprus had much to tell about his family, hometown and music.

Drone music is about making sequences of noises and telling a story through that format. The layered heavy sounds that Mroueh creates are chilling and thoughtful. He uses an electric guitar and strumming motions or even a bow to create a variety of sounds. As well as the instruments, he uses a plethora of pedals for his guitar and incorporates samples into his music. Mroueh has previously released one album independently, which is available on his Bandcamp page. Drone is a sub-genre of minimal music, the genre has been characterised by the long length of the music itself. Drone is described as rhythmically with some harmonic variations throughout. 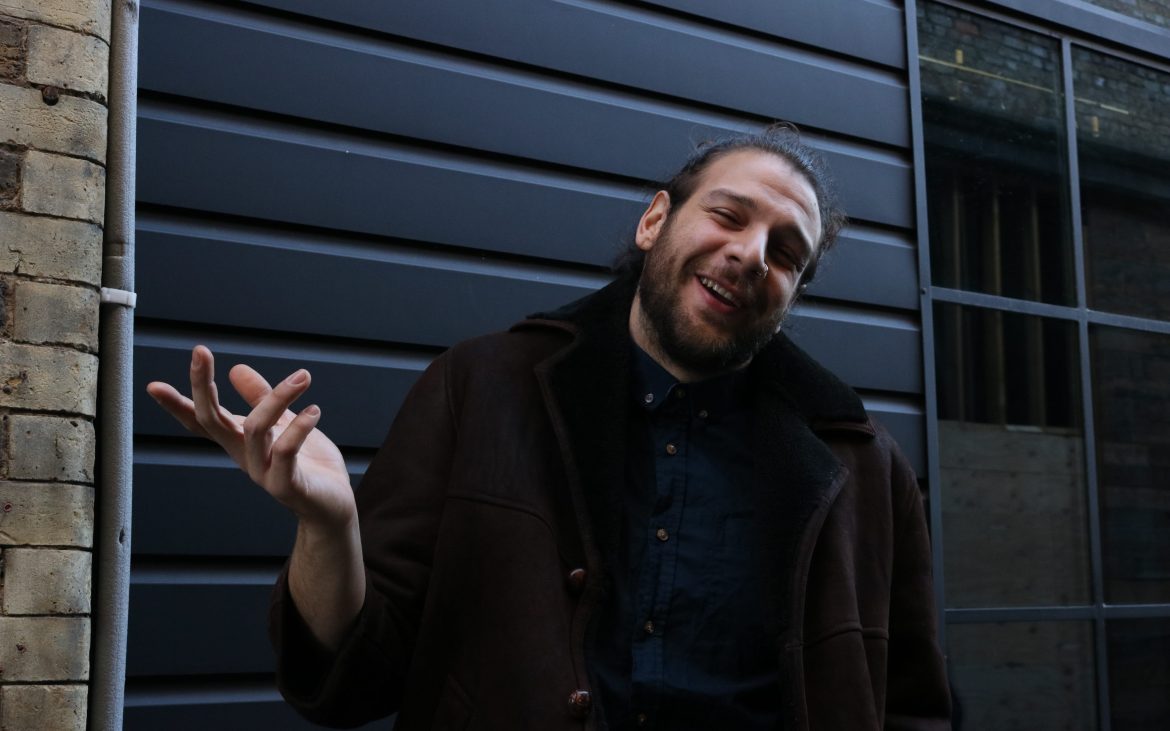 Growing up in Cyprus, there wasn’t much for an 18 years-old to do. Although Mroueh had described himself as a pacifist, he was required to join the army. Military service is mandatory for able-bodied men both from the Republic of Cyprus, and any male non-citizens born of a parent of Greek-Cypriot descent; it applies from the age of 18 until they turn 50.

In the two days he lasted, he realised that it was not what he wanted to do with his life. His decision to leave the army so soon was influenced by the fact that he comes from two generations of refugees. His parents settled in Cyprus after escaping a war zone. “The notion of war and this weird, twisted nationalism was really abhorrent to me,” he says.

With this in mind, there appears to be a link between his principles on life and his music. We spoke about his music and the sampling he uses in his songs. He told me of a sample he once used in his live shows. It came from an American writer. She was in England to research her second book on British class structures, but had been in Ferguson during the riots of 2014, where she interviewed people on the street who were involved in the chaos that followed the shooting of a black teenager by a police officer. In return for cleaning up the audio on the samples, Mroueh was able to use some in his music.

One, in particular, is a sample of a kid “talking about how fucked his days been.” He told me how the kid had been maced and his friend had been shot with a rubber bullet. “That sample was dear to my heart because of how intense and amazing it sounds, and how good it is in the live shows because people stop and actually listen to what he’s saying,” Mroueh told me.

Zeyn Mroueh also creates his own samples for his music. “I sampled people just having picnics and kids playing and dogs running around in Victoria Park,” said Mroueh. The musician lived in a few different homes around that area during his time in London, “that was an interesting part of my life at the time, it was a nice relief,” he said, “and my dog is a huge part of that, I’ve sampled her a lot,” a big smile erupts on the musician’s face when speaking about his pet.

Not believing in fate but still feeling that it’s his fate to be on stage spilling his guts to people, and it is therapeutic to the musician: “It fixes every problem, and it fixes every mistake.” He enthusiastically describes the process of performing as, “picking the fruits of your labour” due to all the hard work and preparation that comes with planning a live show. Having experienced first-hand one of Mroueh’s live shows, it is easy to see how much love he has for performing. The intense music and atmosphere made for a unique experience, and the music he played told a story and showed a vulnerable side of him.

Asking about his writing process, he told me he prefers to let the process start organically because he doesn’t try to force himself to write anything. Writing his music on the guitar, often just playing different chords and sounds until he has found something he likes, he then begins writing the songs “If I have found the ‘in’ to the music then I will be a bit more militant although I would say I’m not hugely prolific I don’t write tons of music and discard a lot of it I only write what I’m going to release.” 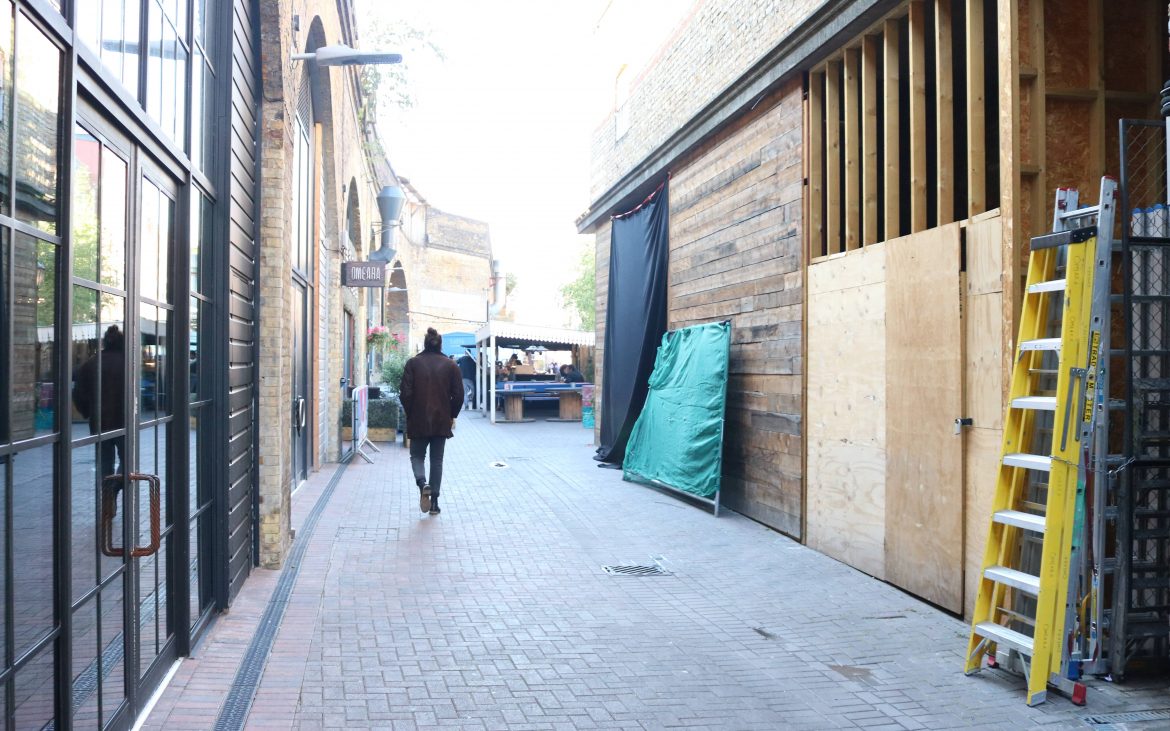 Mroueh uses reflection as part of his performance [Bethany Thomas]

Family has been a big influence on him starting out in music. As a kid, he played around on his mum’s piano and when he was ten years old, his two older brothers started playing music. His eldest brother got a guitar for Christmas which was eventually handed down to Mroueh once his brother got bored with the instrument. Later that year, he embarked on taking guitar lessons, but the realisation that he didn’t want to be regimented resulted in him quitting the lessons.

“My guitar teacher at the time was awesome. He was this virtuoso, classical guitar guy whereas I always knew that it wasn’t for me, I just wanted to experiment,” he said he was always interested in how sound and music relate to each other and how they’re different. “I think it ties into how I first started to make music,” he said. “I started to learn to make music more traditionally by learning how to play other people’s songs and whatever the tune of the day was at the time.”

At 16 years-old, he started his first proper band with some of his schoolmates called ‘Isaac’s Cellos’. He described it as a “psychedelic rock band” and as “one of the fondest memories of music that I have as a younger person.” The band went on to get signed by a local record label in Cyprus when he was 18. By the time he was 19, their first album was released and they began writing and recording their second.

However, the band broke up before the second album was finished, leaving the music untouched and unheard. Once the band had split, he was at a loose end: “I wanted to make music and the interest in sound and noise and drone came up for me and I loved the idea.” 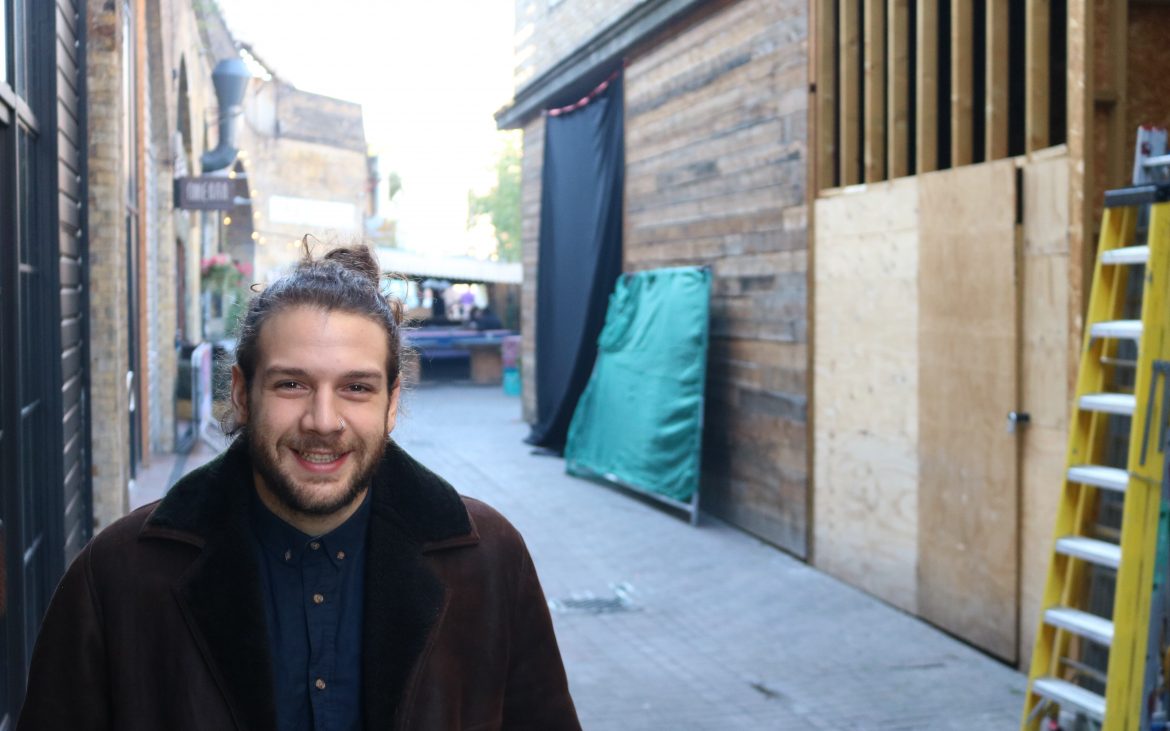 Moving to England seemed like a logical step at the time. His brother already lived in London and he knew he wouldn’t have to worry about the hassle of getting a visa. He saved money for the move by doing various gigs in Cyprus. He had envisioned London as an “artistic utopia where everyone can do what they want,” however, it turned out not at all what he expected.

He discovered drugs, and what it meant to be left alone to your own devices. “I was a little bit unhinged, but I never went off the rails,” said Mroueh. After this freedom and lack of responsibility, he eventually began working various odd jobs and started university at the age of 22, “I think it’s nice to punctuate a section of my life like that.”

As for Mroueh’s plans for his future in music, he wants his album to be completed by December 2018. He is currently halfway through the recording process, however, is still unsure on a release date. “I want to release it with an indie label this time. I don’t want to do it all by myself again because that was very expensive and very difficult,” he says, chuckling.

“I don’t really have any desire to do anything else other than writing and releasing music,” he continued, “all I really want to do is go to different cities and play, that’s like my bread and butter. Performing is where I get my kicks, that’s the high I get off making music.”

All images by Bethany Thomas