Despite the icy cold weather and teeth-chattering winds, a group of protesters stand across the road, signposts and banners in hand. Clad in thick coats, hats and scarves, the group is gathered just a stone’s throw away from London College of Communication (LCC) in Elephant and Castle.

Their aim? Creating gridlock in the area to make the government take a tougher stance on climate change.

The group, who refer to themselves as Extinction Rebellion, have made it their mission to disrupt traffic in the area, an act met by a flurry of beeping horns from disgruntled drivers.

A grassroots organisation formed in 2016, Extinction Rebellion aims to combat climate change through ‘compassionate rebellion’. Having held a number of dynamic campaigns in the past, such as ‘Stop Killing Londoners’ and ‘Toxic Bankers,’ the group have taken to London’s streets once again. 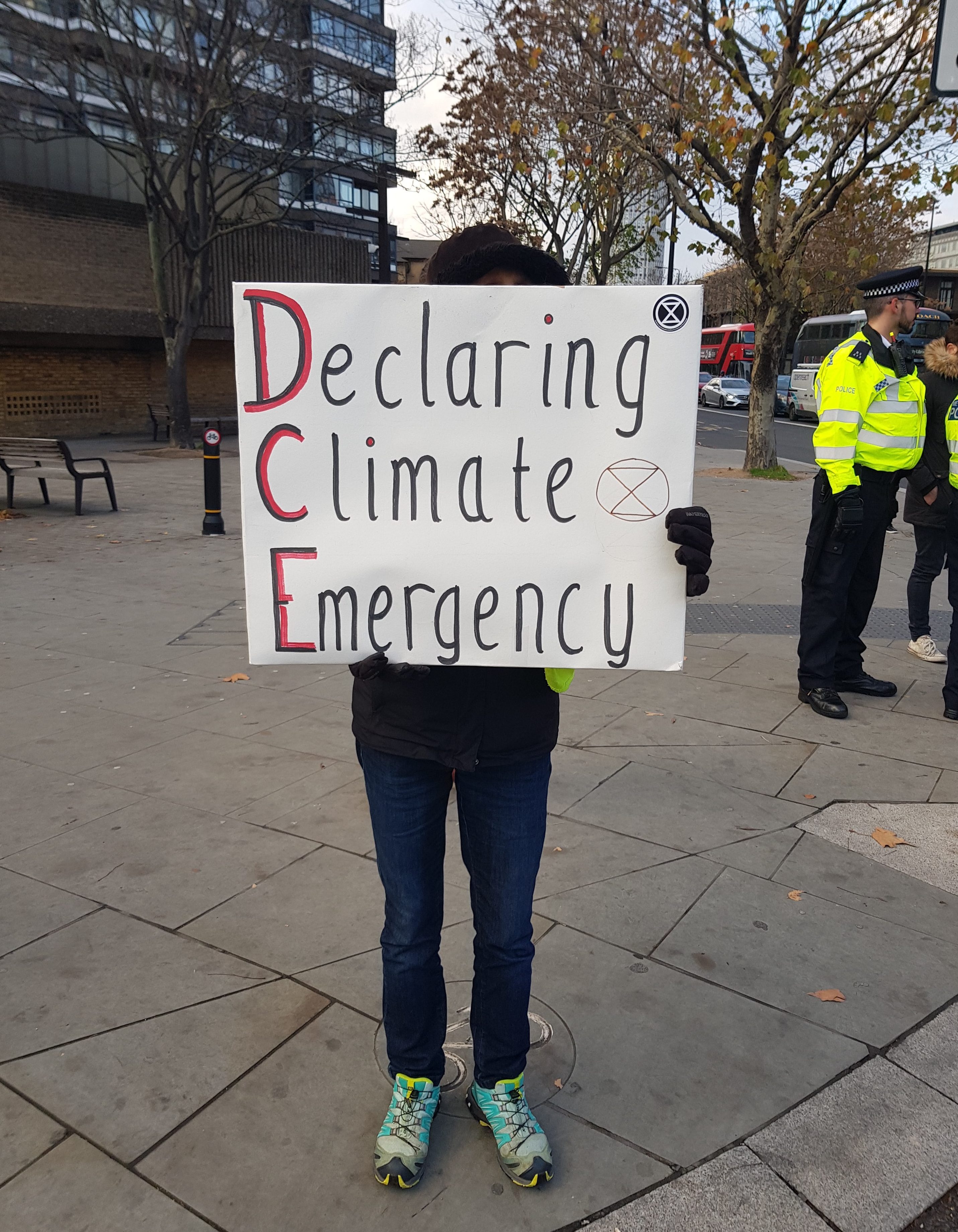 Creative signage was in evidence throughout [Kyle Arthur]

Dr Larch Maxey, who has studied and taught sustainability, has a personal motivation for protesting: “I’ve been campaigning against climate change for 30 years,” he says, clasping a piping hot thermos in his hands. “Emissions have gone up every year for that time, they’ve accelerated, and we need to stop it.”

According to the World Meteorological Organisation (WMO), damaging emissions in the atmosphere reached new highs in 2017, and showed no signs of dropping below the average growth rate seen over the past decade.

“We have to get the government to take responsible action and start doing what will actually benefit everyone,” Dr Maxey adds.

Holding up signs reading “Rebel for life”, “Declaring climate emergency” and “Sorry for the delay”, the group looks physically worn out.

Coming off the road every seven minutes, the protesters, as well as a number of police officers, stayed in the area from around 10:00am to 3:00pm. The protesters were risking arrest by obstructing the road, which is a criminal offence in the UK.

When asked if civil disobedience was really the answer to climate change, Dr Maxey replies: “For 30 years we’ve tried every reasonable measure we could. We’ve done loads and loads of research, we’ve lobbied, we’ve written letters, we’ve held marches, we’ve tried everything we can. We have to be disruptive to try and get the message to the government, to get them sitting around the table.”

Similar direct action has also been adopted by groups like Greenpeace, who claim that this method of protesting is all about taking physical action to prevent an environmental wrong, “at the scene of the crime”.

In 2007, Greenpeace exemplified the impact of direct action by shutting down a coal-fired power station in Kent, with a series of teams each disabling different machinery and then attaching themselves to the building. Extinction Rebellion held a number of organised protests throughout the week, similarly blocking rush hour traffic around Parliament Square on November 24.

Back in Elephant and Castle, passers-by clash with protesters, with one man claiming the group had not only made him late for work but were also hypocrites as they too lived modern lifestyles and therefore contributed to climate change, a frustration echoed by the increasing volume of beeping and yelling.

The congestion caused by the roadblocks also led some to question the legitimacy of campaigning against climate change while subsequently creating more emissions.

In response, Dr Maxey claimed that “the congestion today is causing more pollution, but it’s about the scale and the degree; these small emissions we’re creating here today are unfortunate, but they’re tiny compared with the bigger picture of emissions that have gone up year on year and are accelerating.” 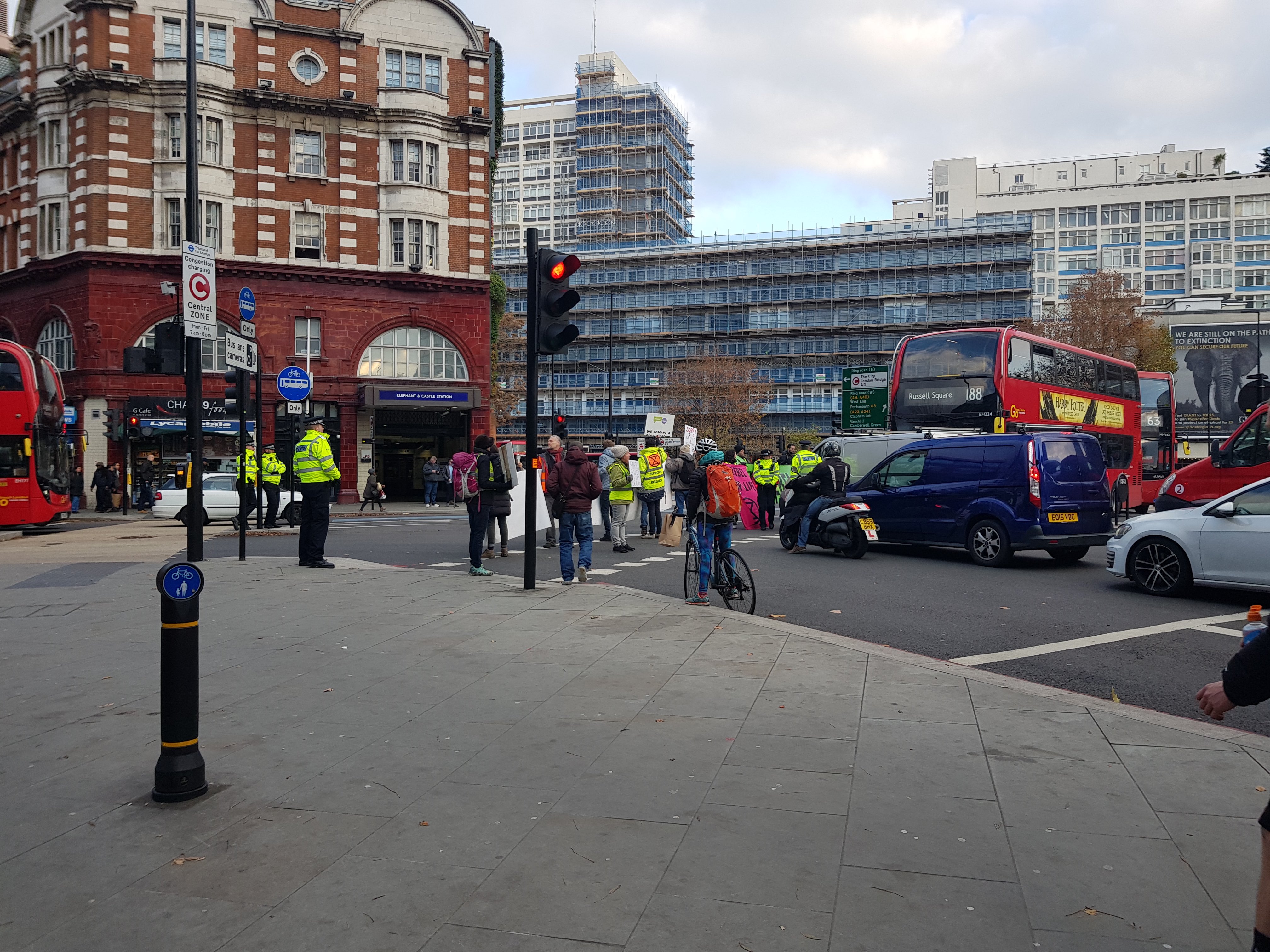 Speaking on November 26, Michael Gove, the UK Environment Secretary, spoke of the impact climate change threatens: “We cannot predict the net effects to ecosystems, but the likelihood is that many will be negative. Some native flora and fauna will struggle. Marine ecosystems will experience warmer and more acidic seas. New pests and diseases could thrive. Deteriorating soil quality and moisture, coupled with a less reliable water supply, will reduce agricultural yields, as we have already seen this summer.”

“This started in the UK but it’s already gone international, it’s kind of hit the Zeitgeist (spirit of the times), people realise that we are facing imminent catastrophe with climate change and we’ve got to do something about it,” concludes Dr Maxey.