As a girl in your early teenage years, some typical worries are your friendships, self-esteem, school, and relationships. Another is one’s period — unavoidable yet still stigmatised.

A girl doesn’t have much choice but to have one, and it reminds her of that every single month. Another reminder for some girls is that they may have to miss out on school as they cannot access menstrual products, leaving them to use cloth or rags as a substitute.

Period poverty is more common than you think, with roughly one in ten young women struggling with the issue.

Elise is a volunteer for The Red Box Project, an initiative that collects donations of sanitary wear for communities and delivers them to schools to try and ensure that ordeals like this stop occurring and that no young girl misses out on education because of her period. 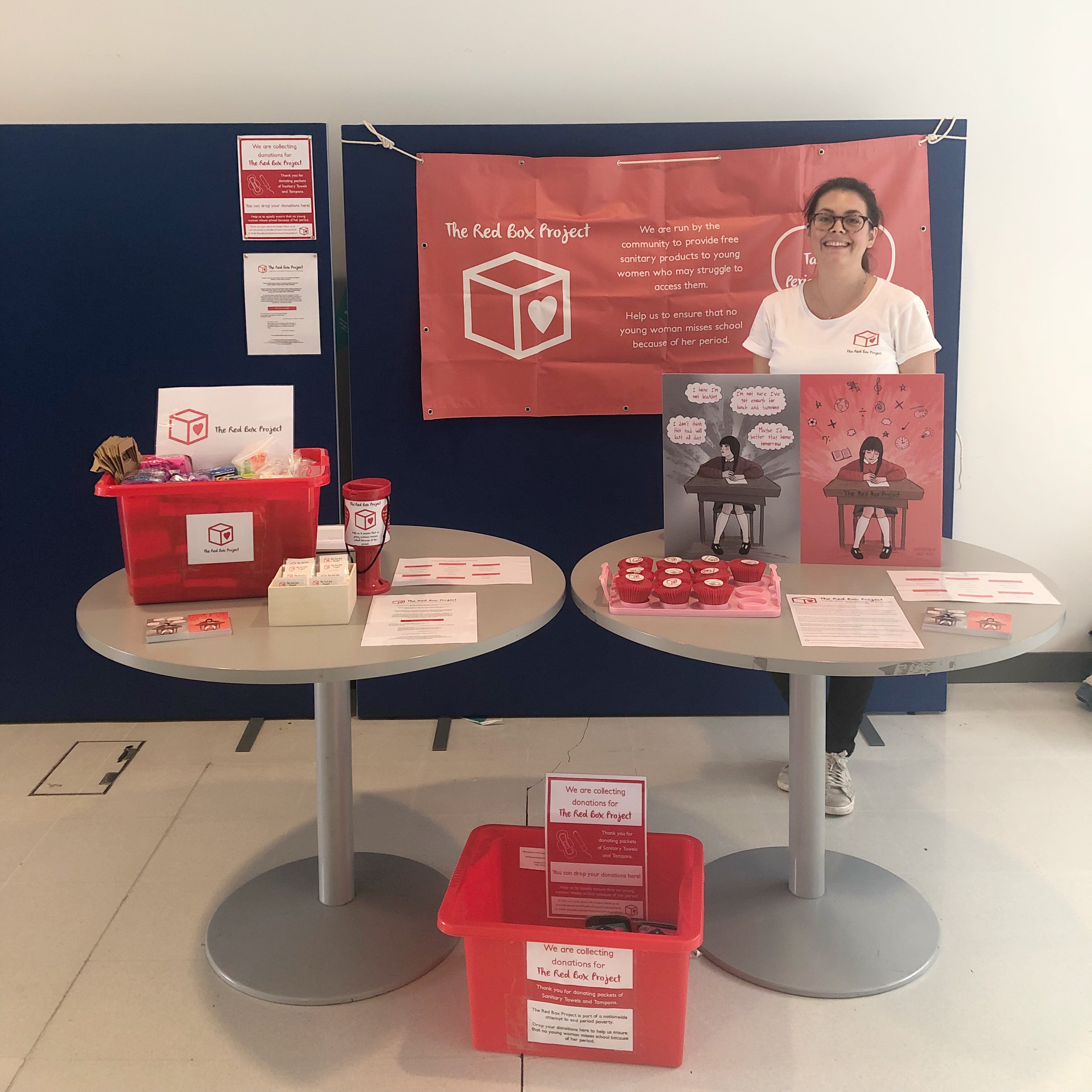 Spreading the word on International Day of the Girl [Elise Evans]

It was founded in Portsmouth in June 2017, and it has now spread the word from UK communities and schools to those in the US and New Zealand. “The simplicity of it has lead to its success,” Evans says. “We collect donations from friends and family and we have donation points in local businesses and supermarkets, the box is there for whatever reason you can’t get what you need.”

The appearance of the topic of period poverty in mainstream media was what encouraged Elise, previously a time-pressed solicitor in the City of London, and her co-coordinator, Gemma, to join The Red Box Project. An early pointer to the depth of the issue came in December 2016 when the film I, Daniel Blake was released, including a scene which showed a struggling single mother being confronted for shoplifting sanitary pads.

This created a tide of awareness, where donations of sanitary towels and tampons to some UK food banks quadrupled. “It is quite ingrained in our culture that it’s a private thing that you deal with at home, it makes projects like this even more important. People are already less likely to ask for help as it’s still a taboo subject,” Evans says.

In April 2017, Amika George launched the #FreePeriods movement, a nationwide campaign urging the government to provide children from low-income households with free menstrual products. As they are most likely to be affected by period poverty, girls from families of a low socio-economic background rely on their schools for the supply of sanitary items.

“They made makeshift products using socks, tissue paper and sellotape. We were quite shocked.”

Elise told Artefact that schools are going ‘above and beyond’ to help schoolgirls, but the lack of government funding increases the difficulty. “When we contact a school we often find out that there’s a member of staff that’s been buying [sanitary] products out of their own pocket. Some schools had to charge students a small amount of money as they were giving out so many,” she said.

The Red Box Project aims to reduce the burden for teachers by encouraging students to take as many sanitary pads or tampons as they need for the duration of their period. The initiative also pledges to replenish menstrual products to schools within 48 hours of them running out.

A possible solution to the issue is to get rid of ‘tampon tax’ – the 5% VAT added to the price of sanitary towels and tampons. Unfortunately, these products are yet to be considered a basic necessity.

Totalling up the amount of money a woman spends on sanitary products, removing the ‘tampon tax’ may equate to a lot, however, getting rid of it may not help impoverished families substantially, as this only converts to a few pence. “If you’re in a position where you’re choosing between buying food and buying period products, it’s not enough to make a significant difference,” Evans continues. 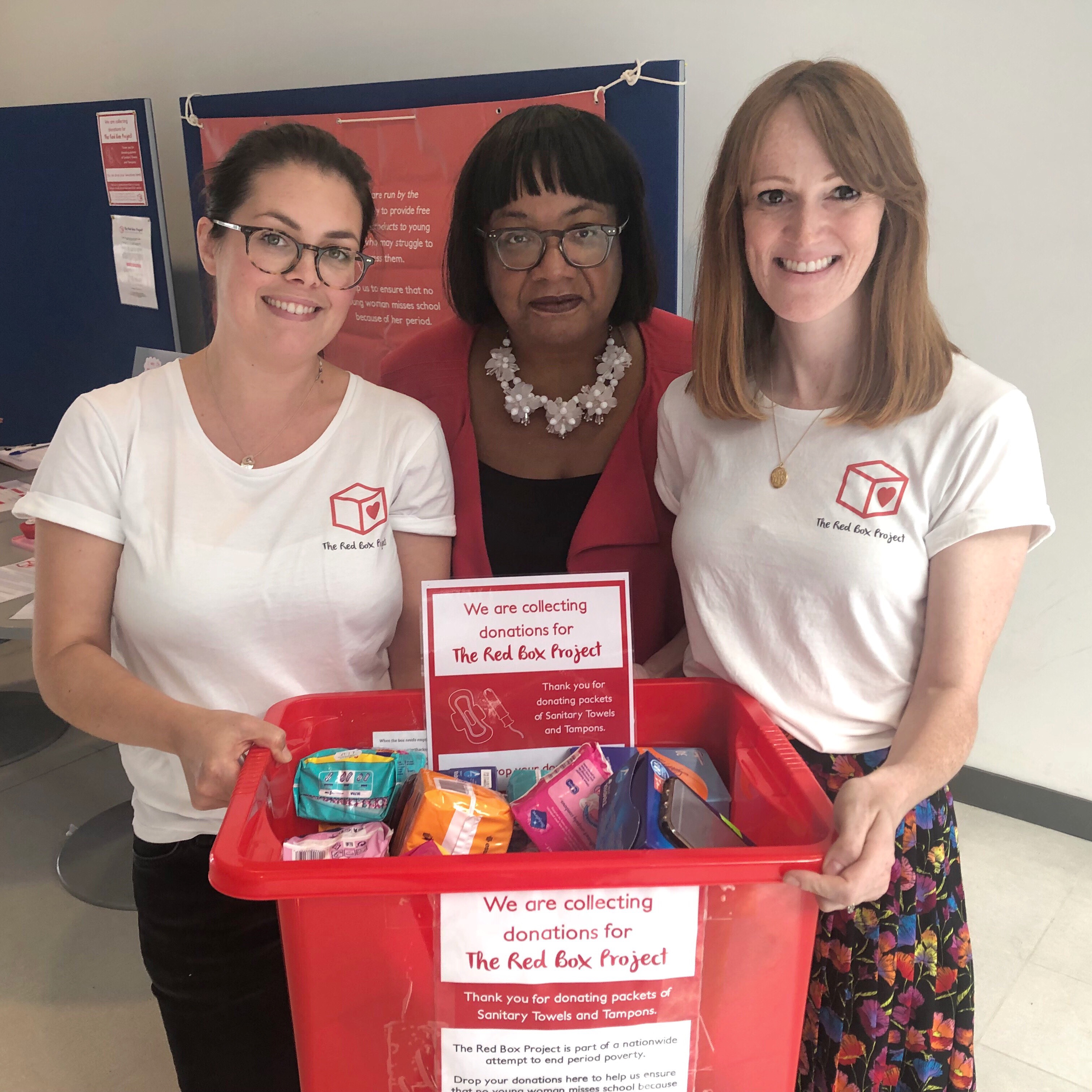 Despite the severity of the issue, there are some who remain sceptical about period poverty. “We do encounter the odd person who doesn’t believe that it exists or that it’s the girl’s problem, Evans told us. “If we were planning how to finance schools completely from the beginning, there’s no way that period products wouldn’t be included. People at school have everything they need, but still no menstrual products. I can’t think of anything (else) that is essential to be able to attend school that cannot be made available.”

Regardless, menstrual products are necessities, not luxuries. Therefore, no girl with a period should be at a disadvantage of getting them.

Period poverty in lower-middle-income countries has shown cultural and social obstructions to the issue. The World Health Organisation (WHO) conducted a review in less economically-developed areas of the world to gather information on the knowledge, beliefs, attitudes and practices surrounding menstruation and hygiene. Menstruation was widely seen as ‘polluting’ and shameful, with girls in Uganda saying they were told periods are a ‘representation of sin’. Whereas in India and Nepal, some girls are banned from cooking while on their periods due to ‘fear of contamination’.

The lack of education on menstruation impeded a lot of the girls’ knowledge; in rural Nepal, no more than a third of girls interviewed by the WHO could correctly identify a uterus.

With their mothers predominantly being their only source of information rather than teachers or health professionals, a popular misconception in Malawi taught to girls is that men can get hurt if they come into contact with menstrual blood. As the cost of sanitary items is a worldwide concern, this also leads some girls in rural and urban areas left to use just paper, mattress stuffing, cotton, or nothing at all. 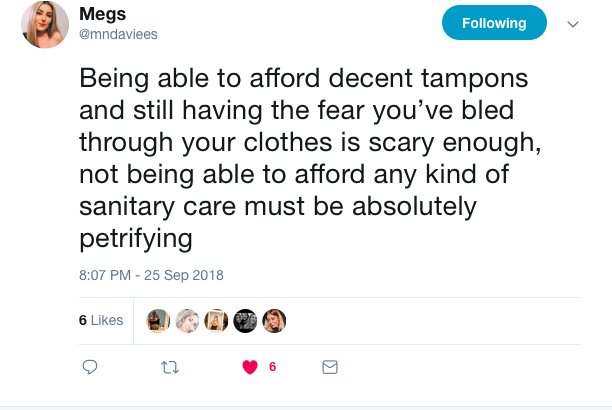 A response to period poverty [Twitter:@mndaviees]

However, change is coming for all girls affected by this phenomenon. In June 2018, the Kenyan government promised to provide every school girl with free sanitary towels and a safety mechanism for their disposal, as some girls currently have no choice but to burn sanitary products.

Non-profit organisations like The Red Box Project are becoming more widespread; others include Bloody Good Period who help asylum seekers and refugees, and Hey Girls, whose profits from their ‘Buy One Give One’ products go to young girls and women in need, with no shareholder meddling.

Conversation is debunking the taboo and stigma surrounding menstruation and encourages those of authority to recognise that this hinders a girl’s education, self-esteem and personal development.

It is this noise that is driving those in authority to finally make these changes.