‘When I look in the mirror, I see a mutilated alien’

Everyone has bad days when it comes to the mirror. Too fat, too thin, too stumpy, too tall – there’s a lot we can find wrong with our bodies. Unfortunately for those with body dysmorphia, these bad days are every day, and it changes how they live their life.

The NHS defines Body Dysmorphic Disorder (BDD) as “a mental health condition where a person spends a lot of time worrying about flaws in their appearance.” Jane Wilkinson, 58, a former mental health nurse, adds: “When most people hear about it [BDD] they think it’s an eating disorder, but it’s far from it. There are so many people suffering from body dysmorphia right now, but they’ll never think to get help because they’re not worried about weight.”

An eating disorder (ED) is a mental illness which involves an unhealthy relationship with food and disordered eating habits. It is a common misconception that EDs are primarily caused by body image – they are usually a result of stress and a need to be in control.

Few people realise BDD is actually an anxiety disorder, often leading to a fixation on one specific body part. Even fewer realise one of its most common forms is Acne Dysmorphic Disorder (ADD). Yes, seeing a “mutilated alien” when you look in the mirror is thanks to an anxiety disorder, not watching too many horror films and too little sleep.

When I met with Anna Cuthby, 21, in a quaint coffee shop tucked-away somewhere in South London, I must say I was disappointed. There was no trace of alien nor mutilation in her face, even though she insisted there would be.

Instead, I was met with a perfectly pleasant young woman, apologising profusely for her lateness. Of course, I knew she’d be late, she warned me she’s always late, as she has to check her appearance ‘‘at least fifty times,’’ before leaving the safety of her room. That may sound excessive, but for someone who’d “rather die than go into the kitchen without make-up on,” it’s pretty reasonable.

Body image has always played a big part in her life. “I remember when I was seven or eight, I got anxious because we had fast food twice in one week,” she says. These thoughts didn’t go away, and by the time she was 14, she was hospitalised with Anorexia Nervosa.

Whilst she was treated for this, she says she was “diagnosed at a time when body dysmorphia wasn’t really seen as a ‘thing’,” meaning that these dysmorphic thoughts were left to develop as she grew older. The impact this has had on her adolescence has inspired Cuthby to speak out about the illness that affects thousands but remains relatively unknown.

“I want to raise awareness because it’s ruining my life, and yet, nobody believes me. When I say I can’t go outside, for example, they think I’m being dramatic.” It’s no surprise, then, that when I searched for someone suffering from acne dysmorphia on a body dysmorphia forum, Cuthby quickly volunteered her insight.

As ADD is not widely recognised, it took Cuthby even longer to realise what was behind certain behaviours and intrusive thoughts. “It wasn’t until my friend, who was done with me always flaking and refusing to leave the house because my make-up wasn’t perfect, did some research.”

Her friend explained Acne Dysmorphic Disorder to her, a subset of BDD where the sufferer overestimates and obsesses over any imperfections they view as acne, even though they go unnoticed by everyone else.

“God help my parents if it was windy, though, they’d have to push me out the front door.”

“When I realised it was a thing, everything started to make sense. It doesn’t stop me being irrational, though. I still feel disgusting every single day.” Over the course of the interview, it became obvious that, sadly, this was no exaggeration. Acne dysmorphia had a major impact on the way she lived her life.

“I suffered from teenage acne early on, and from then I was super self-conscious about my skin. I had my fringe cut in when I was 15 to try to hide my face, and I became obsessed with it covering my forehead at all times.”

This obsession served as a foundation for the manifestation of disordered thoughts. “I’d be too scared to go outside in case the wind would blow it up – I’d check the weather every night. God help my parents if it was windy, though, my mum would have to push me out of the front door to get me to go to school.” 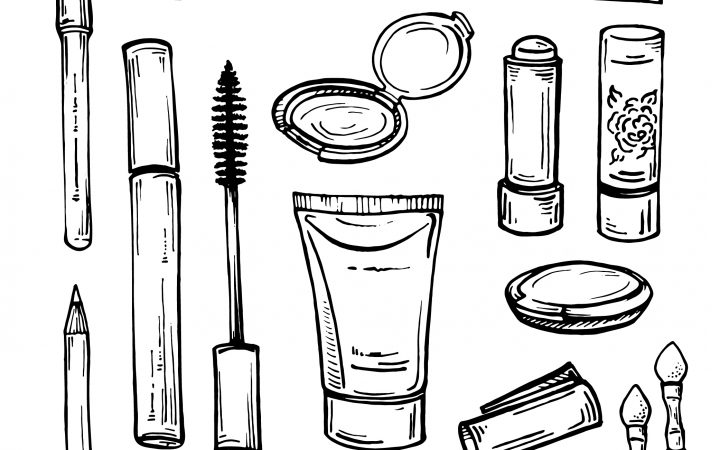 Make-up becomes central to the lives of some ADD sufferers. [Shutterstock:Pinchuk Oleksandra]

By the time Cuthby was 18, her skin had cleared up and she was able to live a normal teenage life. However, a diagnosis of cystic acne was all it took for her to develop a new obsession: make-up. Sure, lots of people love make-up. However, there’s a big difference between creative expression and a rigid routine performed as a desperate grasp at self-confidence.

“Look around,” she says, gesturing to the flurry of coffee drinkers surrounding us, “There’s no one here with acne. You’ll say, ‘Oh they’re wearing make-up,’ but I know they aren’t because I’m obsessed with it.”

It’s clear that constant comparison is a huge part of Cuthby’s life – something she admits has gotten worse as she’s grown older. “When I was younger, others might have had teenage acne, but theirs cleared up. Mine didn’t.” This has only served as fuel for an obsessive makeup routine.

What is an obsessive makeup routine? Well, it goes something like this:

1. First up, you’ll need to transform into an early bird. “People can get up, you know, 10 minutes before class and roll in with no care in the world. I need to start getting ready at least an hour and a half before I have to leave.”

2. Next, you’ve got to work up the courage to walk into the bathroom and face your reflection. “I stand there and I’m like, why? I must have one of the best skincare routines going, how can I have new spots? They flare up overnight for no reason, and I wonder what I’ve done to deserve this.”

3. Once you’ve conquered that emotional turmoil, it’s time to wash your face. “Obviously this is to cleanse my skin, but also, it’s so oily, I need to clear it off my face because I’d rather die than have my makeup sink into my pores before my day’s even fucking begun.”

4. Oil dealt with, it’s time to prime. “I put way more on than most people, because in my head it acts as a barrier and stops my make-up sinking through and becoming cakey.”

5. Once primed, it’s time for foundation. “I actually have a different routine for my nose. My pores are huge there, so it’s tinted moisturiser before the foundation. Oh, and I use my hands, not a blender. It’s more delicate and it won’t cause my make-up to sink into my pores.”

6. Remember, this routine isn’t about expression. There’s no need for contour, highlight, liner, or lipstick – just perfect skin. So, the finale starts with a finishing powder and ends with a setting spray “Way, way too much. I have an exact number of sprays for perfect coverage, but that’s a secret because it’s embarrassing.”

Sounds fun, right? Maybe the first 60 times. Oh, and don’t forget, it’s also incredibly expensive. £50 on foundation and setting spray each month is enough to make anyone sweat, let alone a student. Okay, maybe if makeup is your thing you’d be happy to splurge, but for Cuthby, it’s her disorder doing the spending, not her. “I hate putting on make-up, I hate wearing make-up. If I could be barefaced every day, I would.”

Make-up is relatively cheap compared to some of the methods people are employing to deal with their body dysmorphia, though. An estimated 15% of people undergoing plastic surgery suffer from body dysmorphia.

“These people will come in and spend a lot of money on procedures,” explains Dr Maxwell*, a private surgeon who has otherwise asked to remain anonymous. “The problem is, they’re never happy with the results, so they keep coming back and end up ruining their faces. The worst thing is, they usually have nothing wrong with their features in the first place.”

“I wonder what I’ve done to deserve this.”

Unfortunately, everyday comments are all it may take for dysmorphia to take hold. For Cuthby, her disorder developed thanks to years of bullying at an exclusive boarding school. “The comments they made were so mattered of fact, I assumed it was true what they were saying. I still do,”.

Every day when she’s applying her make-up, Cuthby remembers their taunts. “They drew so much attention to certain areas of my face, I’m terrified of anyone seeing them to this day.”

The dynamics of an all-girls boarding school would be a minefield for anyone, let alone someone suffering from depression, social anxiety, anorexia nervosa, and body dysmorphic disorder. Isolated, it’s no wonder Cuthby began to focus on the one thing she received compliments for – her weight.

You see, Cuthby isn’t in control of her life. Acne dysmorphic disorder is. “I wish I could go to the beach. I wish I could feel the sun on my face. I wish I could be carefree for more than three hours. I wish I could get public transport without worrying about the harsh overhead lighting. I wish I had more pictures, more memories. But I don’t, and I can’t.”

It’s not just living in the now, either. “I worry about the future. How will I find a boyfriend whilst I look like this? Whilst I hate the way I look? How can I find a job with no self-confidence? I’ve read about people unable to get jobs because they have cystic acne. How much longer can I carry on with my daily routine? I can’t be 70 and doing this every day.”

Unfortunately, it appears that BDD isn’t taken seriously enough in our society for much to be done. A disorder which has such a devastating impact on self-esteem and daily routines should be treated with respect, but for Cuthby, she says it’s often a case of “Get on with it,” from those around her.

“Perhaps,” she continues, “if more people were educated on it, attitudes might change. There’s so much more to it than not liking your body, I hope one-day people will understand that.”

It appears as if a lacklustre attitude towards body dysmorphia is one of its biggest obstacles right now. Wilkinson, who spent 28 years working with young people on their mental health, explains: “Unfortunately, body dysmorphia isn’t one of the ‘big ones’. The waiting list for mental health treatment is so long, disorders with physical side effects take priority. It’s sad, seeing how much dysmorphia effects young people, but that’s the way it is, unfortunately. And that’s just body dysmorphia, I’d only ever come across two cases of acne dysmorphia in my career – it just goes untreated and undiagnosed.”

With BDD still lacking in funding and awareness, even though approximately five out of every one thousand people in the UK are currently suffering, ADD doesn’t stand much of a chance. As a result, Cuthby’s future remains uncertain, and remains “Pretty fucking pessimistic.”

*Name has changed at the request of the individual.