‘A Call to Garms’ to tackle homelessness

“In 21st century Britain, everybody should have a place to live,” said Jon Sparks, Chief Executive for Crisis in their annual report. “When we have a place to call our own, we have the best chance of being healthy, living a fulfilling life and feeling part of a society.”

Crisis is one of the leading national charities for homeless people. In addition to offering year-round education, employment, housing and wellbeing services, the charity also provides the ‘Crisis at Christmas’ campaign. Wanting to secure the efforts of Crisis’s volunteers, menswear stylist and writer for the Financial Times, Tom Stubbs, curated the pop-up shop entitled ‘A Call to Garms’. 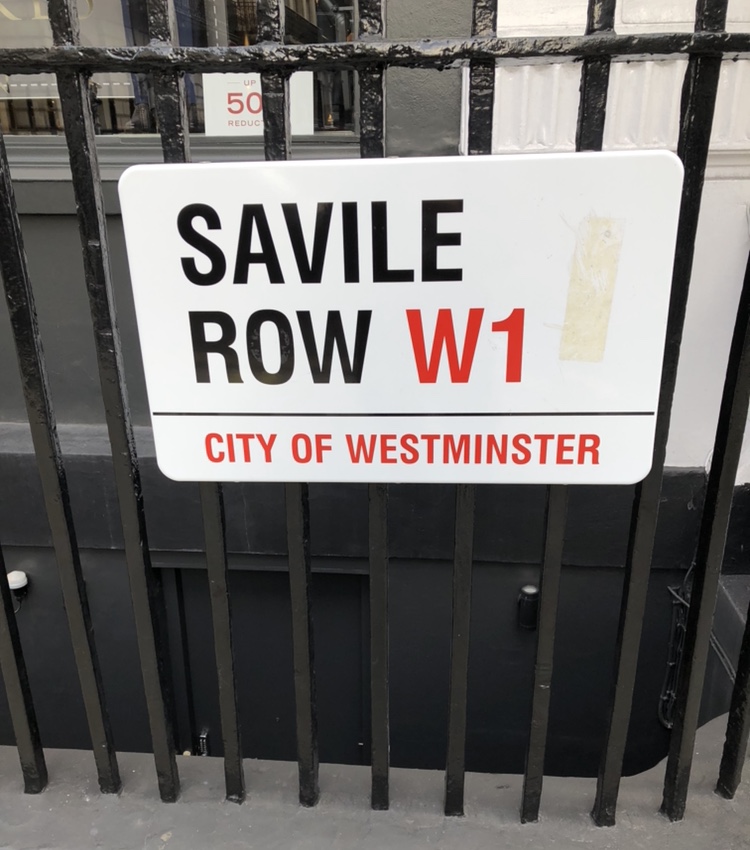 Savile Row was home to the pop-up shop. [Sophie Hall]

Located at 31 Savile Row from December 10, 2018, the shop nestled for a week in one of London’s most affluent areas, best known for its speciality in traditional bespoke men’s tailoring. The affluence is a far cry from the realities faced by more than 24,000 people who are estimated to be sleeping rough both in the city and nationwide. In their press release, Crisis says that in addition to those living on the streets, half of this statistic will also use cars, public transport and tents as shelters.

Artefact spoke to Tom Stubbs’ assistant, Conor Bond, at the pop-up shop. Supported by The Pollen Estate, an area of Mayfair home to major streets covering retail, men’s tailoring and art, Bond told Artefact that ‘A Call to Garms’, was originally going to be in Hackney: “When we spoke to Crisis, the idea grew, and because of the connections that we have in the industry, the support gathered from when we started talking about it went way past what we thought.”

After speaking to estate agents in the area, Stubbs and Bond found an empty shop in Savile Row. Their team eagerly pitched the idea nationally and received interest from sponsors, which then brought ‘A Call to Garms’ to life. “What better than to bring a bit of the East London flair to the hotbed of Mayfair,” Bond enthused.

It is a candy shop for those who want to splurge at the sartorial hotspot while helping homeless people. “We’re doing it cheap, we’re doing it fun, and we’re doing it for a good cause,” said Bond. The items are solely based on donations from consumers of high fashion brands such as Vivienne Westwood and Alexander McQueen, as well as historical tailors such as Anderson & Sheppard and Richard James. “It’s quite diverse, but everything is from a luxury angle,” said Conor. Shoppers were able to scoop up ties for £10 and trousers for £30.

[pullquote align=”right”]“74% of Brits are ‘generally worried’ about homelessness, but 69% also feel ‘powerless’ in helping the issue.”[/pullquote]

One customer, William, was on his lunch break at work when he spotted the pop-up and made use of it by shopping for clothes for an upcoming wedding. “I didn’t actually know this shop was here. Even though we’re in the capital city things like this (pop-ups) that give their proceeds to charity are quite rare,” William told Artefact. “The concept of buying something knowing that it will help someone else is brilliant, ideas like this should really be more common.”

Donations were also made to ‘A Call to Garms’ from established tailors, such as Corneliani who donated ten made-to-measure blazers that could be bought for just under £300. While that price tag may seem eye-watering, bespoke blazers commonly sell for a recommended retail price of over £3,000. “The Savile Row tailors have been so generous, we have been quite spoilt, really spoilt,” said Bond.

Unwanted fashion items are also donated to Crisis at Christmas. Faye shared a heartwarming anecdote from when she volunteered with them at a London shelter last December: “A particular person I will always remember was the man looking for size 13 shoes, that size is hard to come by, and he had been visiting the shelter every day. The shoes he had on were mismatched, and the soles were falling off,” she said.

After using social media to call out for anyone owning unwanted shoes in that size, a friend’s dad found some size 13 leather boots in his loft. Faye said that when presented with the shoes, the man burst into tears with gratitude. “Little stories like that make you want to go back every year.” 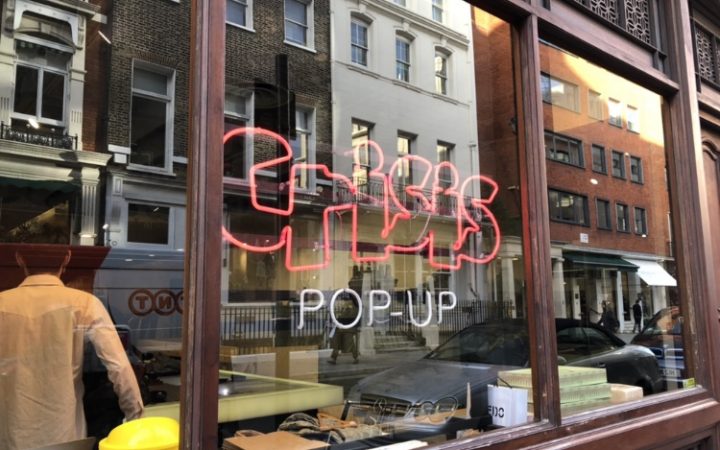 Faye empathised heavily with the loneliness that homeless people face at Christmas. “My mum passed away when I was small, and it’s more noticeable at Christmas when loved ones aren’t there,” she told Artefact. “But I decided I wanted to spend Christmas helping others rather than feeling sorry for myself, it’s very humbling.” Faye volunteered at Crisis at Christmas alongside doctors, beauty therapists, hairdressers and even pediatrists. Doctors on site helped a man who came to the shelter with his leg in a cast. Not only had his leg been broken for over a year, but it was infected due to a skin graft.

One hairdresser, Jade, also spent her day providing ‘haircuts and a natter’ to people at the shelter, sometimes spending up to six hours with one person. “We should not, by any means, have anyone in the country sleeping on the street or not having a home,” Jade said. “After volunteering with Crisis, I made it a priority to find more volunteering opportunities.”

Faye also raised money with her work colleagues by collecting money from the general public in Central London. “It was an evening that I found very difficult, a passer-by asked us ‘Why would I give you my money when it’s mine?’ People would even avoid eye contact as they walked past while we were smiling at them,” Faye said.

The spirit lifted when Faye and her colleagues realised that they had raised more than £900 over the evening, as well as a group of young men donating £30 if Faye told them where the nearest strip club was in return.

[pullquote align=”right”]When presented with the shoes, the man burst into tears with gratitude. “Little stories like that make you want to go back every year.” [/pullquote] Faye believes that funds to tackle homelessness, mental health should be prioritised when it comes to government spending. Jade said that drug and alcohol rehabilitation must be focused on, and the public need to have a softer approach to homeless people.

“I was concerned with some of the reactions I received after telling people I was helping out, questions such as ‘Why would you want to do that?’. There seems to be a terrible disconnect from others,” she added. “I always ask ‘Wouldn’t you want to be helped in that situation?’ but people say that they would never let themselves become homeless.”

Not only is the concept of the pop-up shop beneficiary for homelessness, but it is also tackling the wasteful environmental impact of the fashion industry by encouraging consumers, designers and manufacturers to reuse unwanted fashion items. At a time of year when there is a lot of stock moving to and from winter sales, an unwanted product is often dumped in a warehouse or incinerated.

Tom Stubbs, Conor Bond and their team used this to their advantage in pitching the idea of ‘A Call to Garms’. “We were thinking that if we could get the stock that was sitting in a warehouse, we could sell that for a good cause and keep the integrity of the brands. Anything that’s consumed has an output that isn’t desired – no matter how wonderful, so I think this is great for getting stuff that you could normally not find someone to love, so it gives them that opportunity,” Bond told us.

So what’s next for ‘A Call to Garms’? 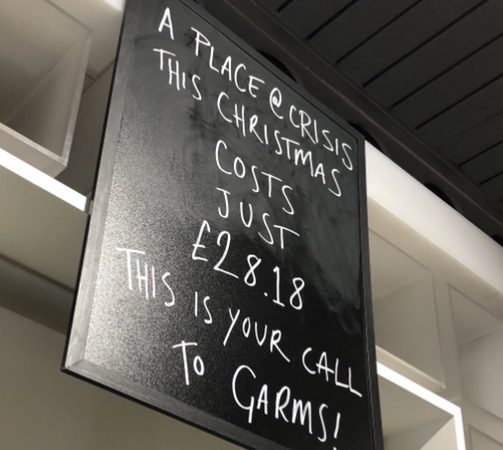 The cost of a pair of trousers at the pop-up could cover the cost of a place at Crisis at Christmas. [Sophie Hall]

“I think the most exciting thing is what we can do with these results, going forward after the pop-up,” Bond said. When Artefact visited on its second day of opening, the shop had already made £20,000. This figure doubled by the fourth day, meaning that even before its final day on December 15, the pop-up had comfortably reached its predicted target for its week-long residency.

“We did this blind via e-mail, saying this is what we want, and the sponsors really believed in us,” Bond said. “We were teetering on the question of whether we would be able to do this yearly, but now I think we’ve realised we can do this more regularly – multiple times in the year.”

A recent survey found that while an estimated 74% of Brits are ‘generally worried’ about homelessness, 69% of them feel ‘powerless’ in helping. The idea of the pop-up shop is a simple catalyst for other charities to follow suit and for the general public to know that their purchasing powers are a great help.

Bigger things seem to be on the horizon; ‘A Call to Garms’ can literalise its play on words by inducing action. “Now we’ve actually got the hard facts, we can multiply it and do it so much bigger and so much better,” Bond concluded.

Find out more about Crisis here and you can read Tom Stubbs’s content for the Financial Times here.