Controversial celebrities and their stans 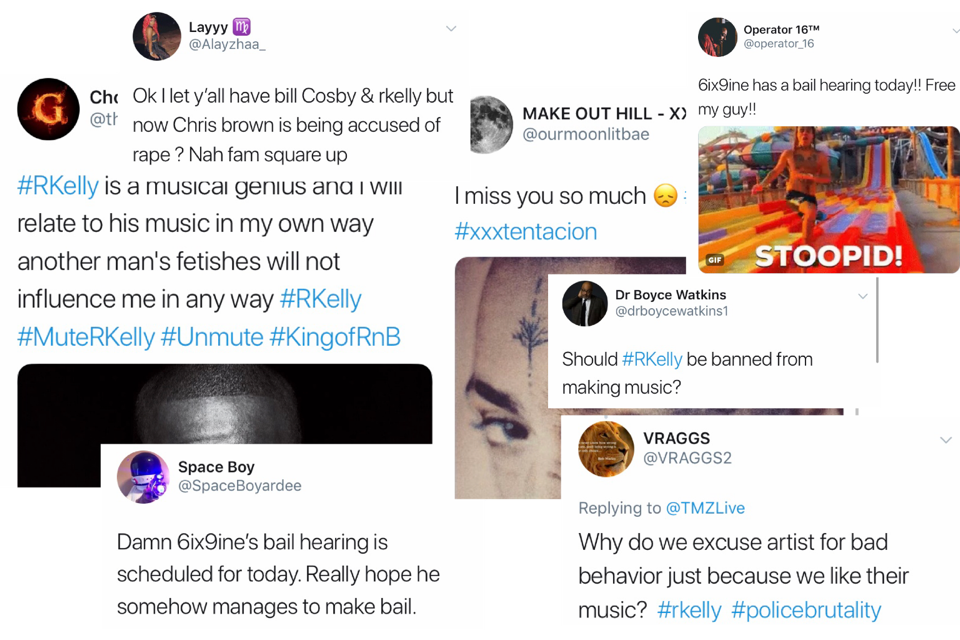 Stan (noun): an overzealous or obsessive fan of a particular celebrity.

Originating from Eminem’s song of the same name, the term stan has firmly marked its place in mainstream online culture. Being added to the Oxford English Dictionary in 2017, intense fan cultures are becoming more pronounced as social media makes it increasingly easier for people to connect globally.

The fine line between what could be considered a stan or a fan can sometimes be blurred. However, most would agree that a stan believes their person of interest can do no wrong. They love what they say, what they do and how they do it, regardless of what it is. Needless to say, this is worryingly problematic. 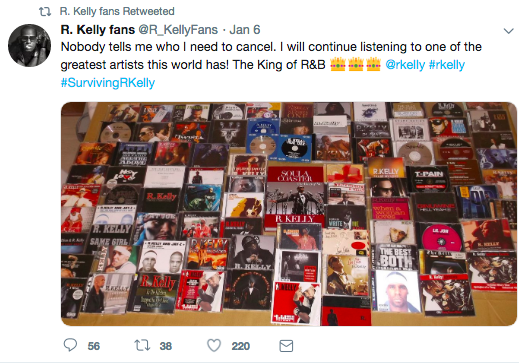 Some fans are unfazed by allegations made about R. Kelly

R Kelly, Michael Jackson, Bill Cosby. All have had their personal lives shrouded in controversy. All are considered legends in their fields. There’s been a long history of brushing celebrities’ controversial behaviour under the carpet by fans – a separation of the art from the artist. These stars, along with newer celebrities such as XXXTentacion and 6ix9ine, are vilified by many, but, despite their controversies, are still idolised by some.

The Crime and Investigation channel show Surviving R. Kelly unearths the alleged abuse the RnB singer has been able to carry out for decades on many predominantly African-American young women. It has caused shockwaves throughout social media and the music industry. Cover-ups, multi-digit payoffs, and his charismatic persona has kept the singer out of any serious legal trouble.

There have been numerous attempts to call R. Kelly out for his controversial behaviour, with little effect. After the broadcast of the exposé, a 2005 clip from The Boondocks, a popular animated TV show which aired on Adult Swim went viral. The episode, entitled The Trial of R. Kelly, imagined enthralled fans celebrating as R. Kelly was found innocent in the trial in which he was accused of urinating on an underage girl. Being so passionate about his music, fans, or what could now be considered stans, sang and danced as the trial came to an end.

This comedic approach to R. Kelly’s alleged abuse of children is mirrored in the iconic Dave Chapelle musical skit called Piss on you. The style replicated that of an R. Kelly-esque music video. The visuals consisted of Chapelle, dressed as R. Kelly, hosing down women with what was labeled as ‘R Kelly’s Urine’. With both comedies being broadcast in 2005, it is, although crude, a stark reflection of how stans, as well as the industry, have chosen to turn a blind eye to the singer’s behaviour for over a decade.

It has caused shockwaves throughout social media and the music industry.

In the latest examination, Surviving R. Kelly, it is claimed that the singer cherry-picked his new underage victims from the crowds of stans that came to witness his child abuse trials. Many news clips were shown of fans coming out to show their unwavering support for the star. Even when on trial, R. Kelly was able to continue abusing young stans who were too young and too naïve to know of his true nature.

Perhaps another result of new wave feminism, its not the first time an influential man’s abuse has been called out within the last couple of years, showing similarities to the #metoo movement.

But with newer celebrities being outed for their unsavoury lifestyles while still only rookies in the business, it’s clear people are willing to look past artists’ personal lives in the pursuit of entertainment.

XXXTentacion, who was shot dead in June 2018, is, both in life and death, a controversial figure. Despite the various highly-publicised allegations of abuse against him, fan – or stan – support never ceased.

Less than a year after being arrested for aggravated battery of a pregnant woman, domestic battery by strangulation, witness tampering and false imprisonment; fans voted him into XXL‘s Freshman class of 2017. He took the only spot open to public vote. This list, collated through talking to just about everyone who is someone in Hip-Hop, predicts who they think will be the hottest new artists in the coming year. “His fans blew up our voting page, pushing him to the top slot by thousands of votes,” XXL claimed. 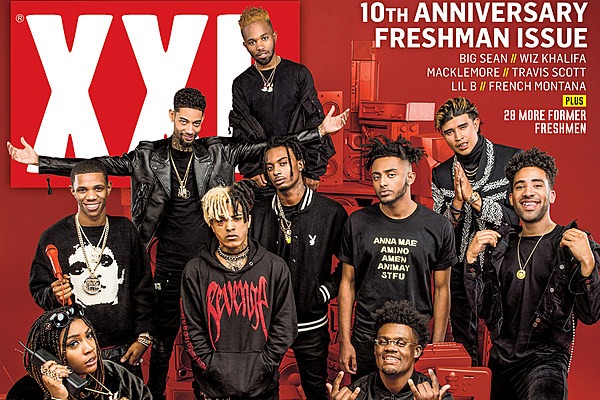 Being the first ever SoundCloud rapper to have an album reach number one in the Billboard charts, XXXTentacion’s success is down to a dedicated fan base, a prime example of stans. But that doesn’t mean he hasn’t come up against resistance. There were many complaints from readers when he made the Freshman team of 2017, as well as criticism from other publications. They called XXL out for supporting an alleged domestic abuser.

On many occasions, brands have made the conscious decision to distance themselves from those of a problematic nature, including XXXTentacion. For a short period of time, Spotify pulled XXXTentacion and R. Kelly from their promoted playlists as a part of their hate content and hateful conduct policy. Outcry from stans, as well as big name rappers like Kendrick Lamar got XXXTentacion reinstated. The ongoing controversies surrounding R. Kelly meant that Spotify refused to backtrack on their decision to remove his music from their editorial playlists. They’ve since refined their policies on content and have announced the potential introduction of muting and blocking artists of your pick. 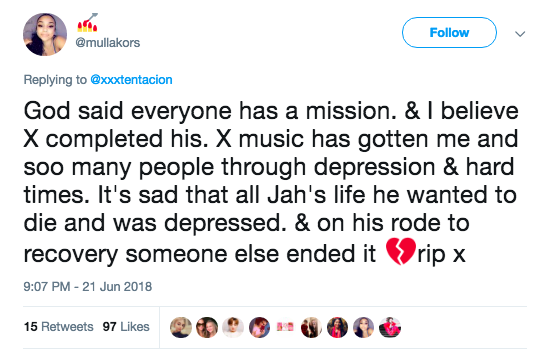 Many fans felt a connection with controversial young star

When trawling through the many tweets and profiles stanning XXXTentacion, there was a constantly reoccurring theme. Many overlooked his crimes as something of the past and labeled him as a young man who was in the process of growing from his mistakes – despite at the time of his death, still awaiting his trial. Many stans also relied on the fact that he was yet to be found guilty in court. However, in footage released after his death, XXXTentacion reportedly admitted to the crimes in what is believed to be a secret recording.

XXXTentacion had a young fan base, primarily consisting of teens. Many claimed that his music, which often focused on suicide and other painful topics helped them through their own dark times. It seemed that for many, the personal connection they felt for the music was more important than the lifestyle of the person behind it.

However, this isn’t a simple case of separating the art from the artist. Stans still felt emotionally connected to XXXTentacion through their shared struggles with mental health. Even months after his death, there are plenty of fan run social media accounts that are still active, many of which aim to overlook his mistakes to see him in a more positive light.

The instagram account @xtentacionlegacy still posts daily content about the late rapper. Boasting more than 4,000 followers, the accounts bio reads ‘Place with love and respect for everyone’. Posting suicide hotlines and groupchat links, it really seems to be a place for people to come together and support one another based on a shared interest.

Speaking to Artefact, the creator of the account explained their support: “His personality and music made me a better person. I run this account to continue to spread his message to the world. I’m trying to help anyone in anyway and that’s how I’m showing my support [of XXXTentacion].”

Addressing the controversies surrounding the rapper, their view was straight-forward: “I just ignore [the controversial stuff]. I receive a lot of hate messages on a daily basis, I’m trying to ignore that but when someone says really bad words to X[XXTentacion] or his mom I want to beat [their] ass.”

“The motherload of research shows that when people are amazing (or even good) in one area, this tends to transmit to perceptions in other areas.”

It’s clear stans have the numbers, passion and willpower to propel their chosen celebrity into stardom. However, one question still remains: Why? Why do these people become so passionate about someone who, in many cases, they have never met?

Writing for Psychology Today, Dr. Nathan Heflick examines why we are obsessed with celebrities using the example of the golfer Tiger Woods, who’s had his own controversies in the past. Seeing him compete on TV, knowing his name – we all feel like, even if only a little, we know Tiger Woods.

“We have all watched him make a putt, and then give that wild fist pump in the air. We all admire Tiger Woods’ ability to [play] golf. And the motherload of research shows that when people are amazing (or even good) in one area, this tends to transmit to perceptions in other areas (the ‘halo effect’)”. Therefore, we expect him to be an all round better person.

This is where normal fans and stans differ. The average fan will feel “annoyed, or even irrate” if their favourite celebrity does anything wrong. In contrast, stans can see their person of affection as always in the right. No matter how outrageous their behaviour, they’ll always be able to justify it, focusing on the positives that person has gifted to the world (even if it doesn’t necessarily outweigh the negatives).

Although there have probably been stans for as long as there have been celebrities. They’ve only recently become a phenomenon of concern. The digital age has allowed for unprecedented access to all types of guilty pleasures on a level never seen before, especially for a celebrity super fan. Celebrity social media accounts on just about every platform you can name allows for fans to hear about the most minute detail of their favourite celeb’s day.

Geotags lets you track the places they visit, live stories can let you watch them streaming from inside their home. Almost nothing’s off limits in the digital age. Convenience is probably the simplest answer as to why we’re seeing a rise in super fans. It’s easier than ever for fans to connect globally and in turn, normalise the intense feelings these stans harbour for their icons.

Appearing to be a growing phenomenon, stanning culture looks as if it will continue to spread, even in support of those who many would consider to be undeserving. It seems the naivety of many of these fan bases reflects the young age groups that they consist of. @XXXTenFanBase wrote, “XXXTentacion Died As An Innocent Man. Florida Dropped The Case.” Many of his young fans assumed the dropping of the case proved his innocence.

However, the reality was, the case was dropped simply because he was dead.