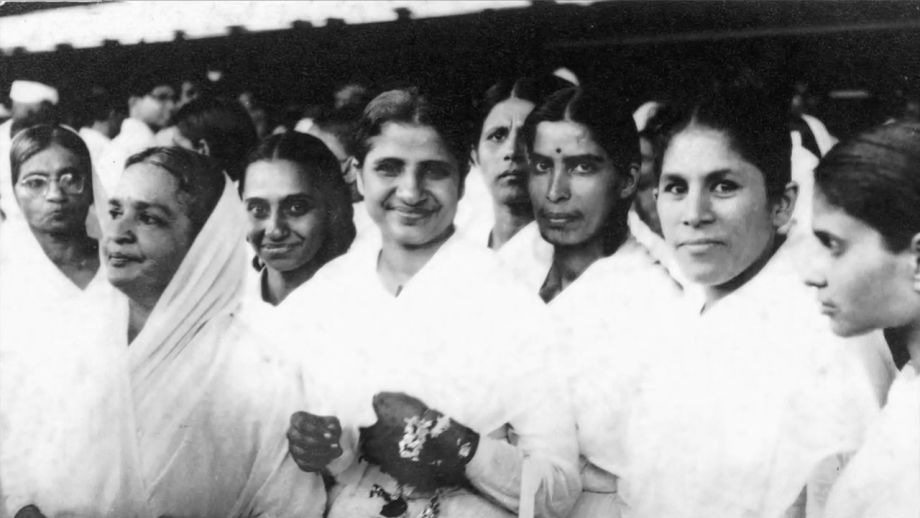 The Brahma Kumaris is a worldwide spiritual organisation led mainly by women. Brahma meaning ‘pure’ and Kumaris meaning ‘miss’. The movement, which has placed women in all positions of power and had women at the forefront from the very beginning, breaks the mould of religions and spiritual movements across the world.

The group welcomes people from all religions and cultures to join, breaking down barriers of caste, colour, culture and most importantly gender.

“The logo symbolises this idea, that is a universal idea of god, not a god that is personified,” says Maniben, teacher of Raj Yoga at the Brahma Kumaris, Spiritual University, London. “It is therefore open to everyone.”

Brahma Kumaris was started in the Sindh province in the early 1900s by Dada Lekhraj, a religious jeweller and wealthy man who started to have visions of floods, destruction and war. He gave up his riches and began the movement. He gave women important roles, which, in 19th century India was revolutionary. Mothers, sisters and wives began to join until 385 women were by his side.

“It’s not brainwashing, but it’s cleaning out the mind, there is so much rubbish in there, maybe it needs a wash.”

“The group faced controversy from the beginning,” Maniben says. “After many women were leaving their family homes, refusing to marry in order to seek a spiritual path with the Brahma Kumaris, an anti-party formed.”

Many women and girls became victims of violence, some were beaten or locked up for being part of Brahma Kumaris. This anti-party was named the Bhaibund (meaning ‘Brother’) Committee, it was lead by important male members of the community, who thought their women were being brainwashed.

“It’s not brainwashing,” says Maniben, “but it’s cleaning out the mind, there is so much rubbish in there, maybe it needs a wash.” She says that there was also a backlash against the group when it began in London. “There was a big hoo-haa when we opened our doors, with many people saying we are a cult, we were thrown out of our community, and people would talk about us, saying it was not normal for women to live this way, a simple life.”

In present times, the movement has global recognition. There are BK (Brahma Kumaris) centres in 110 countries, including the UK, however, the group still faces issues. There are one website dedicated to warning people about what they claim is a dangerous cult. The site claims to offer a reality check for those lives ‘affected’ by the Brahma Kumaris and cover topics such as broken marriages, mind control, suicide, and the targeting of recently bereaved women.

Sushila Patel, from Birmingham, says that joining Brahma Kumaris saved her family after the death of her father. “My dad died in my mum’s arms, she had never been independent, we didn’t even know if she would be able to cope.”

She says Brahma Kumaris helped her to become independent, it didn’t just teach her about becoming more spiritual, but it also taught her life lessons, “There are so many groups and sessions on how to manage stress, grief, and she even learnt to handle her own finances.”

“My husband didn’t like it first, I use to go on my own”

She says that going to the BK centre in Birmingham was the best decision her mum made, and slowly the rest of the family joined. “My husband didn’t like it first, I use to go on my own,” she says. “Eventually he saw how much I had changed, and how I was handling life better, now he is a major part of BK, it has changed both of our lives.”

The headquarters of BK in England is the ‘Spiritual University’ in north-west London. The giant building displays modern decor, the reception is clean and minimalistic, with fresh white walls, a spotless marble floor and fresh flowers hanging out of vases across the room and the giant, orange egg-shaped orange logo features on the central wall. The centre has many corridors and floors, three conference rooms, two restaurants and a gift shop.

Inside the shop, there are many books that focus on practical issues and mental health. Anxiety, depression, positive thinking, there are audio CDS, calendars, bookmarks and many free leaflets for different practical courses such as Women and Spirituality and Breaking the anger habit, all of which are free to attend. 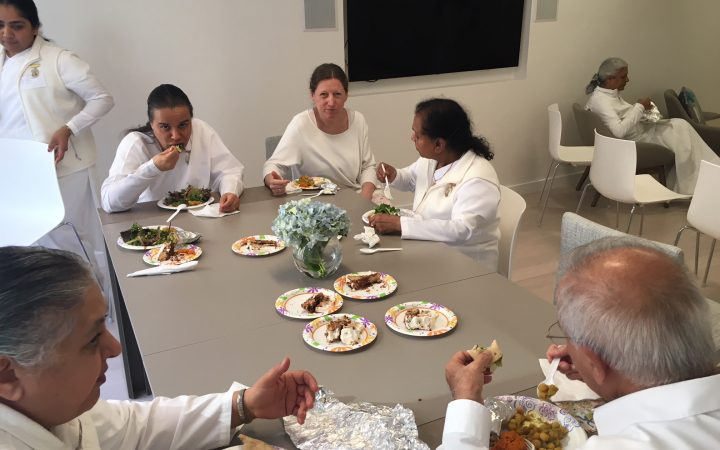 Maniben, like many of the other women in the centre, was dressed all in white in a cotton robe similar to what a monk or a guru would wear. She eagerly showed us the different rooms and offices within the centre, such as a children’s play area, a media centre and the accountancy office which is run by a group of smiling Indian women of all ages, which, we were told, was unusually calm for the financial headquarters.

She led us to one of the two restaurants, where food was being prepared by men and women. Maniben explains that the food does not contain garlic or onion which is unusual for Indian cooking. She described that as ‘Rajas’ food, that can make you angry, or hot-headed. “Plus it makes you sweat and not smell great, it’s not good for the stomach and the stomach is connected to the mind so it also doesn’t help with meditation,” says Maniben.

Those practising the BK way of life, take careful consideration to the food they eat, the food must not contain impurities and if possible, not cooked by anyone who is not a BK member themselves. Which means no ready meals, or takeaways. “I never eat anywhere but here,” says Maniben. “If I cook myself that is fine, but I won’t let anyone else cook for me if they are not BK.”

During supper, an English lady called Rachel, also dressed in white, sat on the table and spoke happily about the play she is involved in for Christmas, a Brahma Kumaris take on Cinderella that focuses on positive thinking for children in local schools.

Halfway through the conversation, some Indian music began playing and everybody put their heads down for one-minute silence, this happened twice during meal time.

Brahma Kumaris has been called a radical cult. With many of the sites and committees against the group saying that women are being controlled and practising mind control through hypnosis.

“It is about controlling your own mind, not anyone else’s,” says Maniben. “It is not hypnosis, some women can go into a trance,” she says. “We get up at 4:00 am every day to connect with God. I meditate, I focus on the point of light and the whole room is filled with light and energy. I experience this every day.”

“Its a type of woman power, or female power”

Maniben says that when she was younger she was an atheist and didn’t want anything to do with religion. “I went to India from Africa, age of 12 and the little faith I had was all gone,” she says. “It was all corrupted.”

When she was fourteen she came to England with her family. Her father started to become interested in the Brahma Kumaris, “I thought: What’s happening to him?” He insisted Maniben join the course, which at first she didn’t want to: “What about my evening television? I thought.”

To please her parents she went on the course, which was seven days long. “Something started to feel different, I began to take notice of what was being taught, it was different,” she says.

“Its a type of woman power, or female power,” says Paru from Peterborough, who doesn’t attend the centre but watches videos on Youtube of the world famous Sister Shivani, who is the winner of ‘The Women of the Decade Achievers Award’ [ASSOCHAM’S Ladies League], and who inspires people through her channel that focuses on practical and useful spirituality with titles such as “Do small issues trouble you?” or “Gossip enters your energy field.”

Paru’s family were distraught about her decision to become a BK sister. “When they found out, my husband and dad started shouting at me and my mum didn’t speak to me,” she says.

“My family always preached to me about how bad it is, I don’t preach, yet I’m the one who is supposedly in a cult,” she says. “I’m independent, I handle my own finances. I’m a better mother and more calm with the kids.”

Paru’s husband initially had concerns about the friends she made online through the BK forums: “I mix with women of all casts, religions and colours,” she says. “We have a Whatsapp group and on there my friends are English, Muslim, Indian, Swedish, Italian, Australian. But they are all BK because BK women don’t gossip.”

“People in BK don’t talk about other people, because our lives are fulfilled, I am not just a housewife, a mother, or a daughter in law I am all of those things whilst still being close to god, have a purpose outside the home, but new people with different views it scares my husband.”

“Becoming celibate is an empowering decision for a woman.”

Women in Brahma Kumaris hold top administrative positions within the movement yet BK affirms that It is the partnership with both women and men together, based on respect and equality that makes everything balanced.

“It’s not that men are less,” says Paru. “Dada, the founder of BK is a man. Men do have big roles in BK, it’s just in BK, women can do it too. Women and men are the same. That is a threat to some men,” she says.

She says that although she can’t live in the same way that other sisters live because she has children. She does follow the diet, the lessons, and also practises celibacy. She believes that women were put at the forefront because of celibacy, “That is a weakness for man, and it might be why so many are against us, becoming celibate is an empowering decision for a woman.”