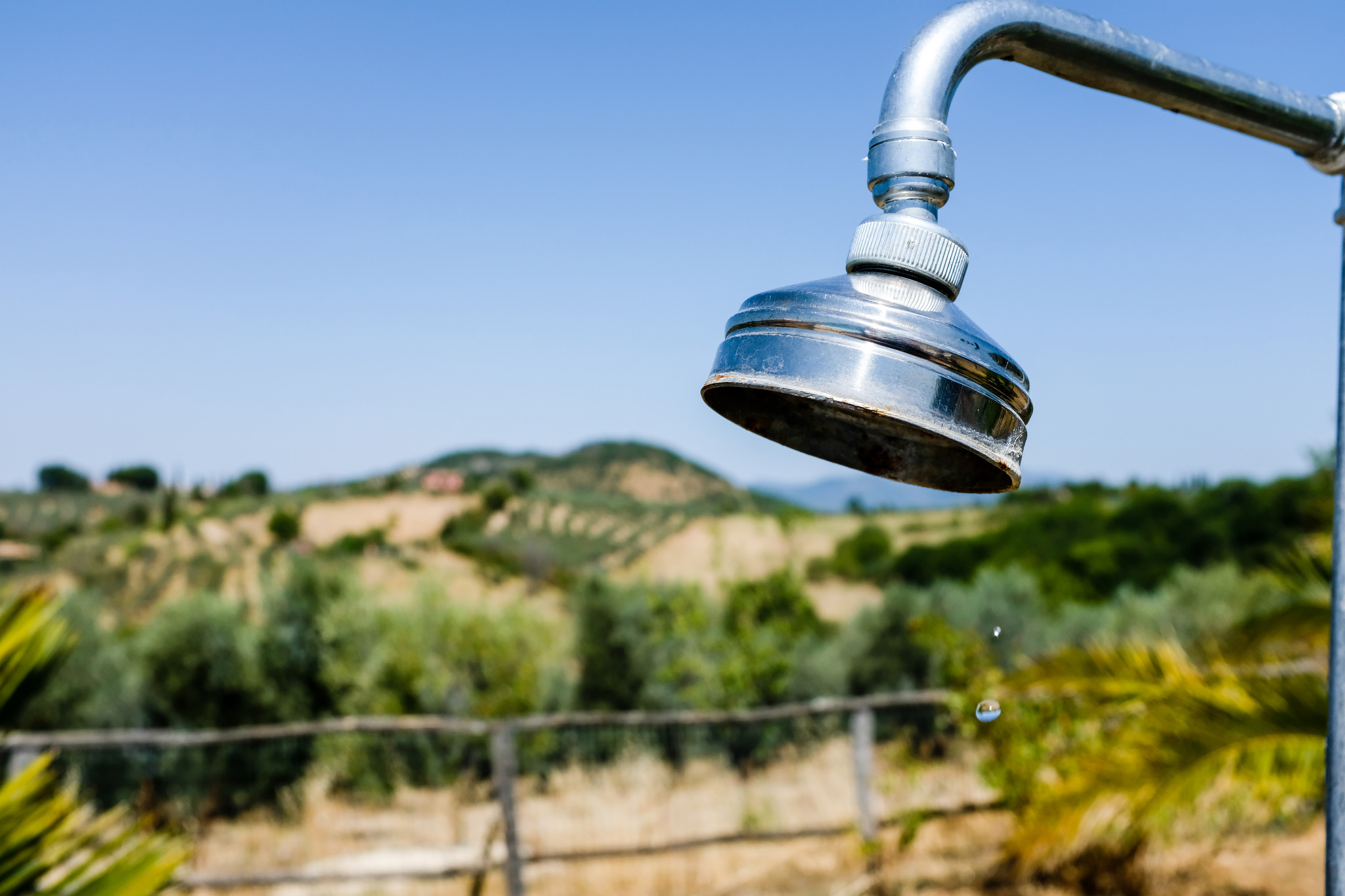 “Once something like this happens, it changes your whole way of living,” says Robyn Wilson, who lives in Monte Vista, a suburb of Cape Town, South Africa.

For the citizens of Cape Town, 2018 began in anything but a celebration. The city was running dangerously low on water reserves and as a result, the threat of switching off most of the cities taps and therefore reaching ‘Day Zero’ was looming.

Having endured drought for the last three years and with their dam levels at 35% average, Cape Town was set to become the first major city in modern history to run out of water. “When the drought started,” tells Robyn, “which was more than a year ago; the government put restrictions on our hosepipe usage, and things like that, which was fine, we got on with it. But then it became a much bigger issue in January of this year.”

“It has changed our lives completely. At its worst in February 2018, we were only allowed 50 litres per day per person which includes your food preparation, the toilet, baths, drinking water, all of that.” 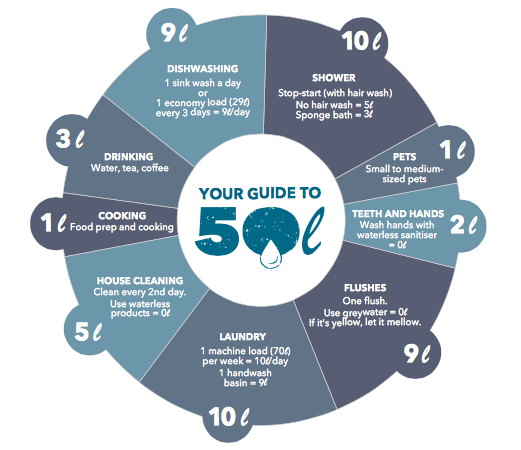 Guidelines for water usage from the Cape Town government

For Robyn and her family, 2018 brought about a complete change in daily habits. Having just bathed her four-year-old granddaughter, Robyn was about to bathe in the leftover water in a basin one-third of the size of a normal bath. “I’ll fill up an extra kettle of hot water and add it to the basin to re-use it,” she says.

“Later tonight we’ll put that bath water into separate buckets and use it again to flush the toilet. The same applies to the washing machine; that water doesn’t get drained, instead, it comes back to us and goes into buckets to be re-used and will even get put back into another wash cycle.

“It has become our lives. Life is about buckets.”

Simple habits such as flushing the toilet have been sacrificed for the city’s residents, as one flush uses up to 13 litres of water or about one-quarter of a person’s daily allowance. “Nobody flushes their toilets anymore, we say ‘if it’s yellow let it mellow, if it’s brown flush it down” she recites with an apprehensive laugh. As resourceful as this may be, it has led to blockages in their sewage systems, with so little water being used to flush away waste.

“The extreme drought here in Cape Town should be a wake-up call for all who think that climate change is some far-off threat,” writes Mike Bloomberg, the UN’s Secretary-General’s Special Envoy for Climate Action in Bloomberg Philanthropies. “

It’s already here, it’s making droughts and storms more dangerous, and we’ve got to do more to keep it from getting worse. Cities and businesses are helping to lead the way, but all levels of society in all countries – on all continents – must take bolder actions. We cannot let droughts like this become common around the world.” 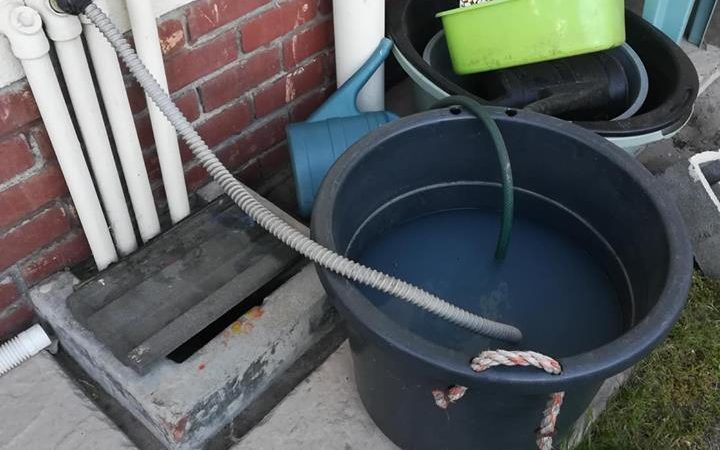 A basin that connects to the outlet pipe of Robyns washing machine. They will fill their buckets with that water and use it for the toilets or the plants.

A Facebook group Water Shedding Western Cape was set up by citizens affected by the drought as a platform to share tips and encouragement with each other. “Dry shampoo was a great tip I picked up, and leave in conditioner. There were magnificent ideas,” commented one member.

However, in the lead up to Day Zero which in early 2018 year was anticipated to arrive in April, the group predominantly organised water collection points. Day Zero would have seen a total shut off of running tap water and personal rations lowered to 25 litres per day which was to be collected in person at the designated points throughout the city and carried back by each individual.

When the threat was at its highest and water was becoming more scarce, explains Robyn, people were going to the Newlands Spring (a natural spring in Cape Town) and “physically fighting over the water. It was quite horrific. People were coming with trucks to fill up with water. They also went crazy in the shops buying water, grabbing it, filling up their trolleys with litres. People still have tens if not hundreds of five litre bottles sitting in the garage, just in case.” 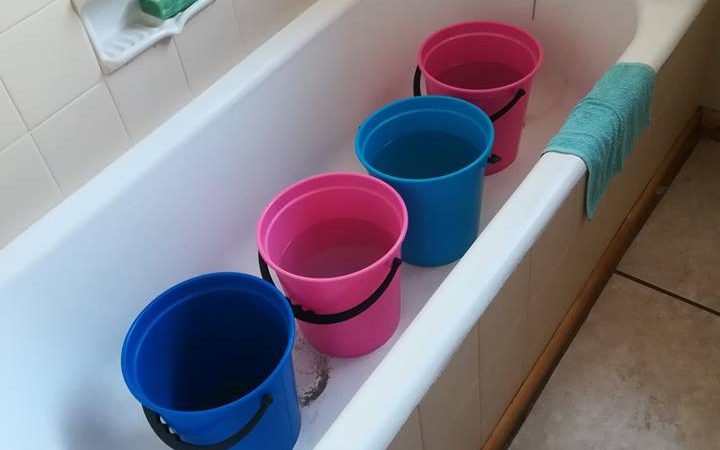 The buckets used by Robyn and her family to collect water for re-use. Image supplied by Robyn Wilson

This chaos began to cease in April this year as the water saving actions adopted by Cape Town’s residents saved the future of the city.

In July the city saw a record low week in its water consumption of 481 million litres per day which along with heavy rainfall boosted respective dam levels by 5.6% to 48.3%. “It suddenly started raining, it was amazing. It didn’t rain day-in-day-out, but when it rained the heavens opened. It started to build the dams beautifully, at the moment they’re at 70%,” Robyn said.

As of December 3rd, the water restrictions were lifted to 105 litres per person per day.

The City’s executive deputy mayor, Alderman Ian Neilson released a statement commenting: “Not only have we fought back to avert an unprecedented crisis, but we are also setting the benchmarks for water saving across the globe. We have more than halved our water usage in the past two years, and our usage per person is now among the lowest in the world for a metropolitan area.”

Though the change in water restrictions is a vast improvement from the 50 litre limit of just under a year ago, the residents of Cape Town have learnt the value of accessible water and will continue to live a more water-conscious life.

“Though we’re out of the worst part, experiencing this kind of rationing will change how we use our water forever.”

How can we survive ‘Day Zero’?