Leaning reluctantly yet impatiently on the familiar bar at the local pub, I am just one of many young women waiting to spend our student loan on a vodka and coke for the bargain price of £2.50.

Today marks a whole four days without a drink. Yes. Four days. I’m ashamed to admit that this was my somewhat pathetic attempt at Sober October.

The futile attempt to repair my liver from the festival season, and prepare for the alcohol-induced damage awaiting it in the festive months of November and December seemed so enticing. But my inability to pass on a drink somewhat bothered me. I am however not alone in my failure, my friends seem to all struggle with turning down a post-uni vodka-and-lemonade at the student bar.

In realising that I could not last four days without a drink, yet not identifying as having a drinking problem; perhaps myself and my friends are apart of a wider issue.

In fact, all over the UK, young girls can’t seem to stay sober but not just for October. A new study conducted by The World Health Organisation has found that teenage girls in England, Scotland and Wales occupy three of the top six places for binge drinking among 36 nations in Europe, for the first time ever taking over their male counterparts.

For women, binge drinking is defined as consuming more than six units of alcohol, compared to eight for men. Six units translates as three standard (175ml) glasses of wine while eight units is four, assuming that the ABV (Alcohol by Volume) is 12%.

Drinking habits among young women are arguably changing because of a shift in marketing strategy. Alcohol companies are creating more women-friendly drinks which are based around fruity and appealing flavours and are calorie controlled. Additionally wine and vodka have declined in price in recent years, again these are drinks preferred by women, Sir Ian Gilmore, chairman of Alcohol Health Alliance UK told The Times.

Not only are girls drinking more, so are women. British women now average three drinks a day, for the first time the same as men according to The Lancet. This makes us the eighth highest drinkers on the planet. Although these figures are worrying, it is important to point out that when measured year-on-year, drinking is actually decreasing; 58% of adults drank the week before a survey in 2016 which represents a fall from 64% in 2006 according to NHS figures. 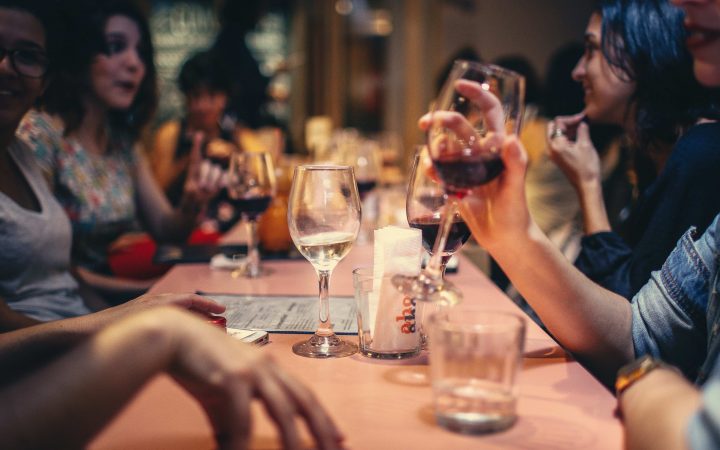 Although these figures may seem surprising, pledging to go alcohol-free for 31 days is possibly a bigger commitment than it seems. Whilst living in a culture where drinking plays such a central role to social interaction, perhaps passing on a drink could create a level of exclusion. How can we break away from the normalised tradition that we perhaps take for granted? And why do we have such a problem here in the UK?

Reaching out to young British women seemed to be the best place to start. Millie Postlethwaite is a 19-year old living in Carlisle who has failed sober October for two years in a row, drinking on average two to three nights a week and getting drunk around once a fortnight; she tells me that this is average among girls her age.

While working three jobs and studying at college she openly tells me about her struggle staying sober for October: “I was at a party and I didn’t want to be the only one not drinking, this year me and my boyfriend tried again, but, by the second week of October we couldn’t do it anymore, we both needed a drink.”

Millie and I unpick the cause of the problem here in the UK, she tells me it is the accessibility of alcohol that is the root of the problem not only for those underage but for people of all ages: “Alcohol is everywhere”.

This story is a typical illustration of the UK’s damaging drinking culture, a competitive environment where binge drinking is not only normalised but celebrated. Young people are too absorbed with the social benefits that come with drinking, as an outlet to explore their new-found freedom, an adolescent rebellion of sort; drinking is possibly all too much fun to worry about its damaging effects.

As such a key element of so many social interactions as a teenager, a time of finding yourself and establishing your identity. Adolescent drinking is almost a rite of passage here in the UK.

We can all remember coming of age house parties centred around Blue WKD, fruit cider and your Dad’s can’s stolen out of the fridge. A hormone-fuelled environment, with an underlying competitive atmosphere of who can drink the most alcopops before their teen bodies can’t handle it anymore.

Often it is a practice of acceptance, a bid to stay with the in-crowd, a way to not only establish their social circle but also themselves. This is supported by figures from the alcohol education charity Drink-aware which show 67% of 13-17 year-olds who drink alcohol say they drink because it makes social gatherings more fun.

“Competitive drinking culture can arise when you’re part of a group of friends that express disapproval if someone doesn’t keep up with rounds or decides not to have a drink. This behaviour can put enormous pressure on people who worry that their friendship or work friendships will be affected; in turn, this can negatively impact their well being and mental health,” Dr John Larsen of Drink-aware tells me.

The fear of disapproval and a desire to be accepted by peers can explain in part our problem with binge drinking here in the UK. But what are the effects of binge drinking as a teen?

Artefact spoke to Evie, a 24 year-old living in London, who has remained sober for 13 months after taking part in Sober October while at University. To the disbelief of her peers it “totally changed her perspective on drinking”. She opens up about the effects of teen binge drinking and has dedicated a blog to her experiences in the hope of enlightening other girls who may have adopted similar drinking habits.

Exploring her memories and regrets of binge drinking Evie tells us: “I tend to glamorise those times, but in order to stay sober I have to remember the week-long hangovers, the broken relationships and the blackouts. I missed out on a lot because I was so obsessed with going out and getting drunk. I loved going out. I found it exciting. It was probably my favourite and only hobby. My mental health was deteriorating and so were my most important relationships.”

Evie’s experiences are not unique, the social pressure is a key contributing factor in why young women drink. Although more sober bars are opening up, even they still have a stigma attached, she tells me how she attends fellowship meetings (Alcoholics Anonymous) and is the youngest person there.

This alone possibly illustrates the normalised drinking culture among young people and a general inability to identify a problem with excess alcohol consumption. According to The Lancet, alcohol is thought to be a factor in 2.8 million deaths a year worldwide.

Dr Larsen provides an insight into the damaging effects: “Binge drinking harms your health and leaves you vulnerable. Our bodies can only process about one unit of alcohol an hour and less for some people. That’s about half a pint of low strength (4%) lager or ale. If you drink a lot in a short space of time the amount of alcohol in the blood can stop the body from working properly.”

The damage is not caused by a single vodka and coke or a glass of wine with dinner, but the big Saturday night binge, a practice most common among younger women.

Sober October is a good starting point in controlling drinking habits suggests Dr. Larsen, who thinks it’s “effective when combined with moderate drinking for the rest of the year. Cutting back or taking a break from alcohol can be a good opportunity to reflect on how much and how often you drink, and the potential impact on your health, your mental wellbeing, family and relationships.”

Thinking back to my many nights spent in my local pub, spending my student loan on unnecessary vodka-lemonades and countless mornings ruined by hangovers. I now regret succumbing to social pressure and breaking Sober October.

Perhaps I’m just like Millie and Evie, a product of an environment fuelled by alcohol, in which getting drunk is portrayed as an escapism, a way to socialise.

Speaking to these young women has opened my eyes and given me a clear scope of the problem here in the UK while inspiring me to put right my failure of sober October. Through Dry January I have perhaps put right my wrongs, stayed sober and above all surprised myself.

If you relate to any of the issues discussed, you can get more information from Drink Aware, a charity working to reduce alcohol misuse here in the UK, and Mind who provide details on where you can find support on alcohol addiction and dependency.

By Jiaqi Zheng
1 Mins read
By listening to the story of a former bully, discover the reason and solution of school bullying with psychologist Paul Smith.
CultureFashion