Rome, a city almost three thousand years old, littered with ancient ruins, impressive places of worship and artistic sculptures and architecture – it demands to be seen.

But that’s not all it has to offer. Along with its impressive history, Rome is also the city of theatre, music, art, fine wine and the list goes on. As it is one of Europe’s most popular destinations, let Artefact help you with everything you need to know before visiting the city of secrets.

Flights to Rome are frequent and usually inexpensive. Most flights last between one-and-a-half to two hours. As for public transport once you’re there, Rome is similar to London. There are buses that depart every ten to fifteen minutes and an underground system that runs every five. An all-day travel ticket costs roughly three euros (£2.63) and can be bought from the airport and all underground stations. It covers the entire zone of the city, so it’s super easy and cheap to get around.

Where to go and what to do 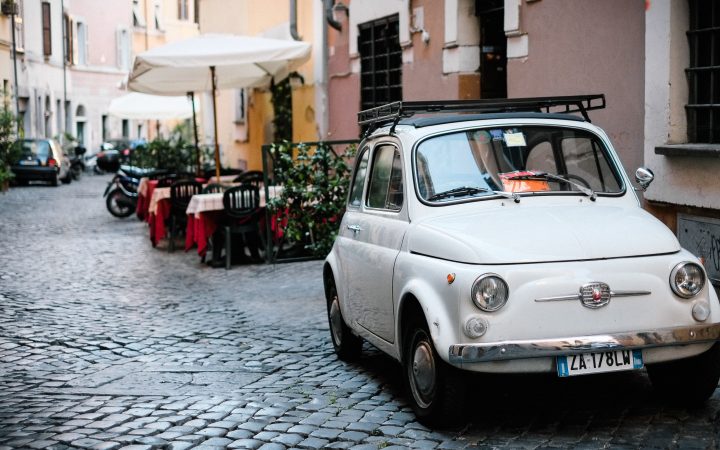 Like any other city, it is bursting with tourist attractions, but there’s something more mysterious and magical about the city of Rome. The city leaks this dolce vita chicness even though it carries the weight of three thousand years-worth of secrets and history.

Rome is best experienced and explored on foot. Wander along winding streets with a coffee in hand or enjoy a gelato in a cobbled roadside pavement cafe, it all adds to the city’s charm. The pace of life can be slow and sleepy like a Sunday morning, but you can also enjoy the hustle and bustle of the city centre, out and about on the weekends. It has the perfect mix of both relaxation and excitement making Rome your perfect city break destination. 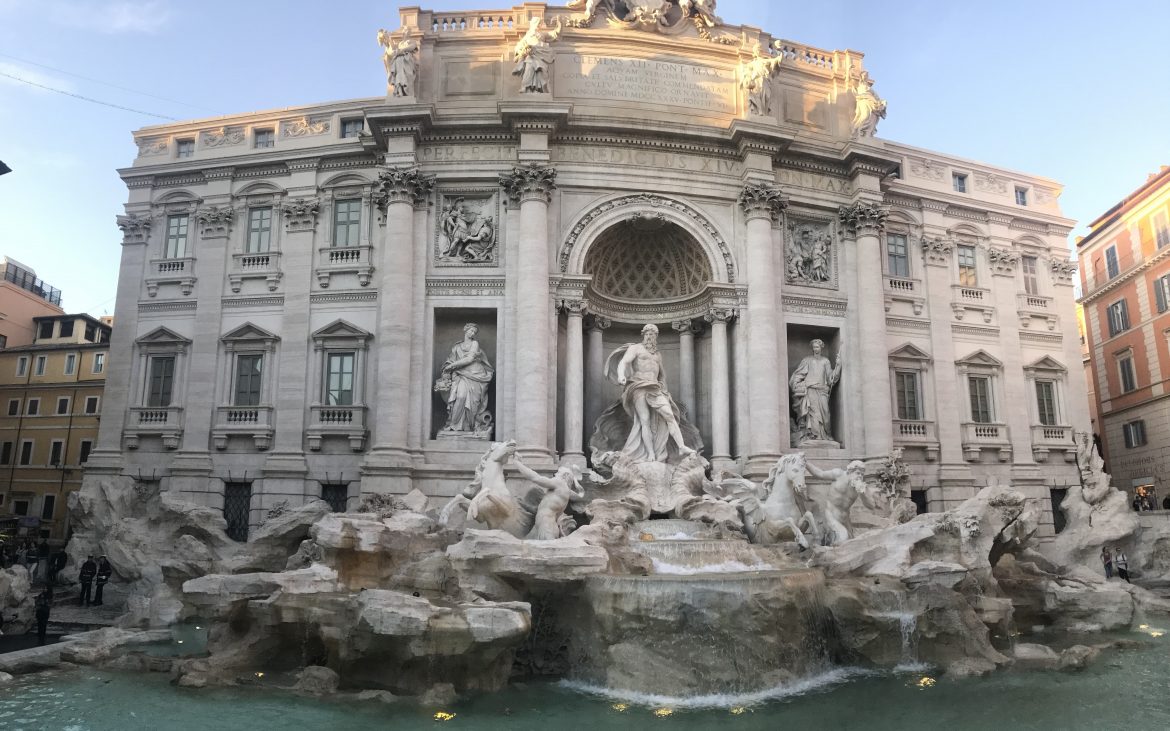 If you haven’t already guessed, at the top of our tourist attraction list is, of course, the famous Trevi Fountain. A historic landmark, architecturally remarkable and stunningly beautiful, the fountain was designed by Nicola Salvi in 1732. The Trevi shows the sea god Oceanus with his seahorses.

As the sunbeams and the all-day crowds of tourists watch the fountain, crystal blue, sparkling water trickles down the sandy coloured stone sculptures. People from all walks of life gather around taking pictures and flipping old coins into the fountain as, legend has it, a coin thrown into the fountain ensures your return to Rome, two coins are thrown to help in love, and three for wedding bells.

To appreciate the Trevi in all its glory visit the fountain early in the morning as the sun rises. Pick up a coffee and a pastry on the way. Sit on the edge of the fountain walls and watch as the sun gleams onto each sculpture and as the water ripples and sparkles flowing through the fountain. Not only is this a beautiful time to see the fountain but you will have beaten the crowds for the day. 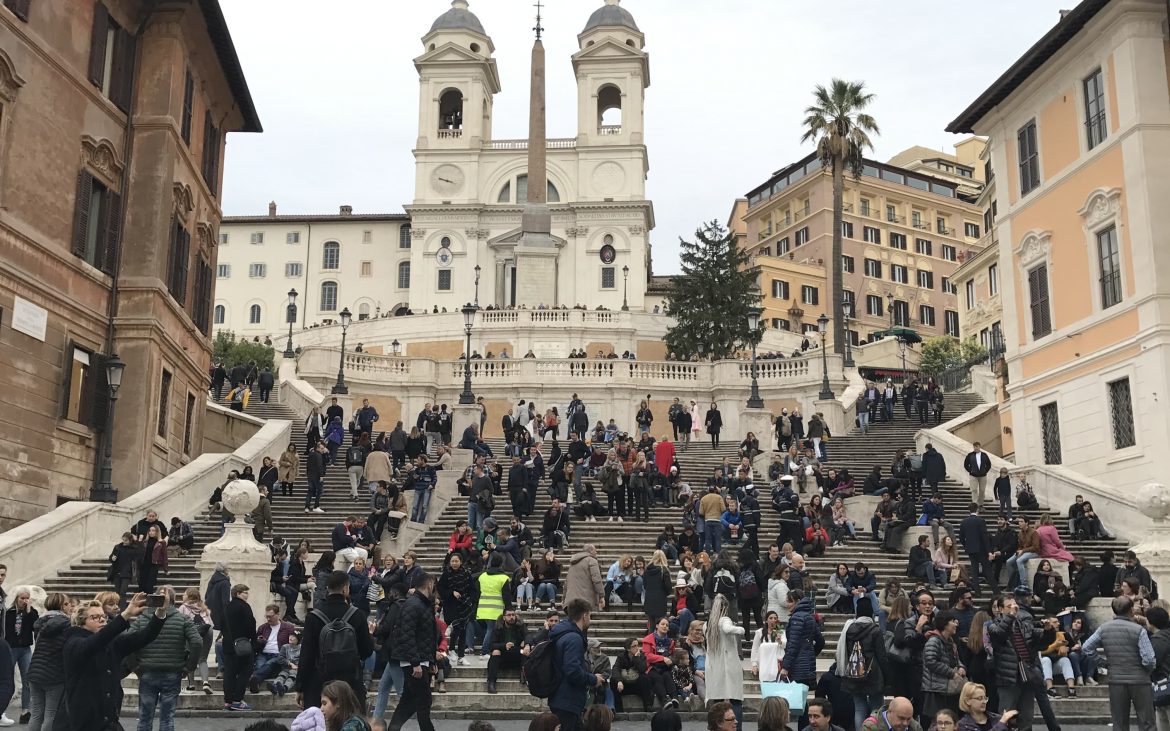 Just a short walk from the Trevi you can find the Spanish Steps. An elegantly constructed stairway made of gorgeous white marble, connecting the Piazza di Spagna at the bottom to the Piazza Trinita Dei Monti at the top. Built by Francesco de Sanctis in 1723-25, the steps are another popular tourist location.

The bottom of the steps is littered with high-end designer stores such as Tiffany’s, Gucci and Louis Vuitton. The street also consists of lavish Italian restaurants and cafes, making it the most cosmopolitan area of Rome. Perfect for a shopping day or maybe a luxurious evening meal in the evening.

Take a stroll through the area and perch on one of the 135 white marble steps. It’s a great place to wind down with friends or a loved one before your evening begins and watch the sunset over the rooftops of the city.

The Vatican and the Sistine Chapel 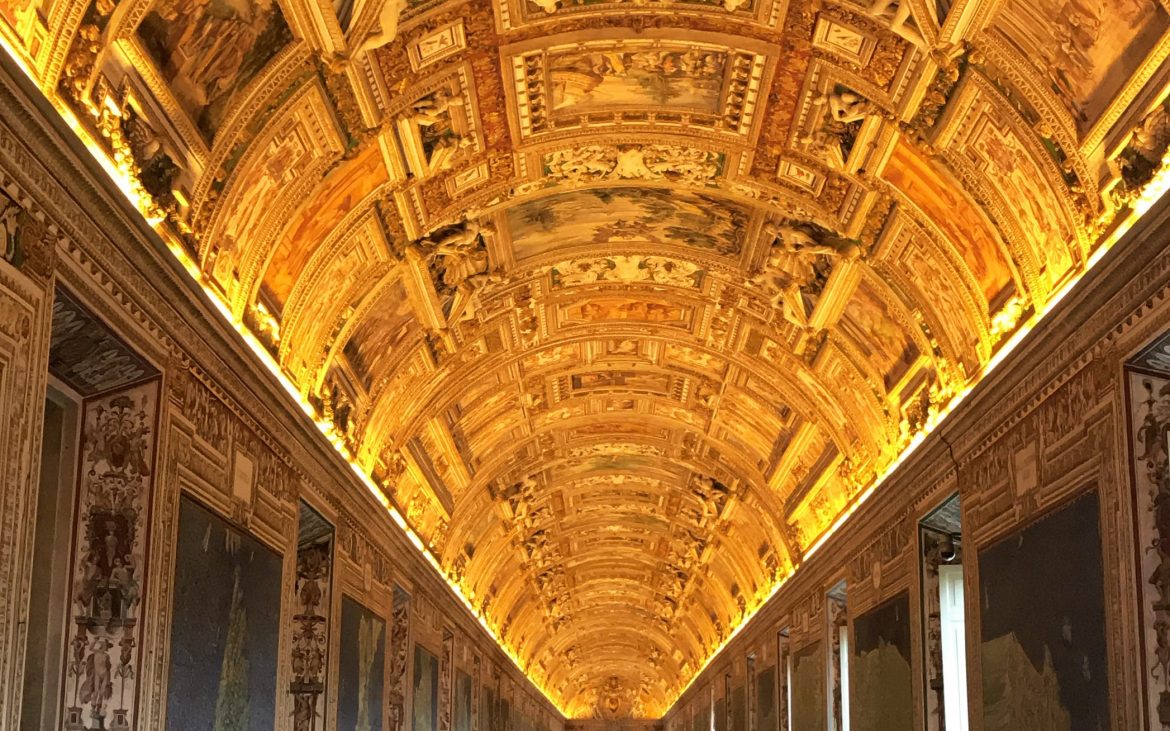 To follow on from such beauty at the Trevi and the Spanish Steps, the perfect place to visit next was the Vatican and the Sistine Chapel. Home to the Roman Catholic Pope and Bishop of Rome and know for the art that hangs on its walls, as well as the precious jewels and sculptures it magnificently exhibits. The Vatican is simply a must see, and let’s face it, staying in Rome and not visiting the Vatican is like staying in Rome and not eating pizza. Simply a must.

Opened in 1929, the Vatican’s astonishing interior is simply breathtaking. You can wander through long stretching halls, illustrated with colourful murals and hall coated in gold. We often found ourselves admiring the ceiling or the floor tiles rather than the sculptures or paintings displayed. 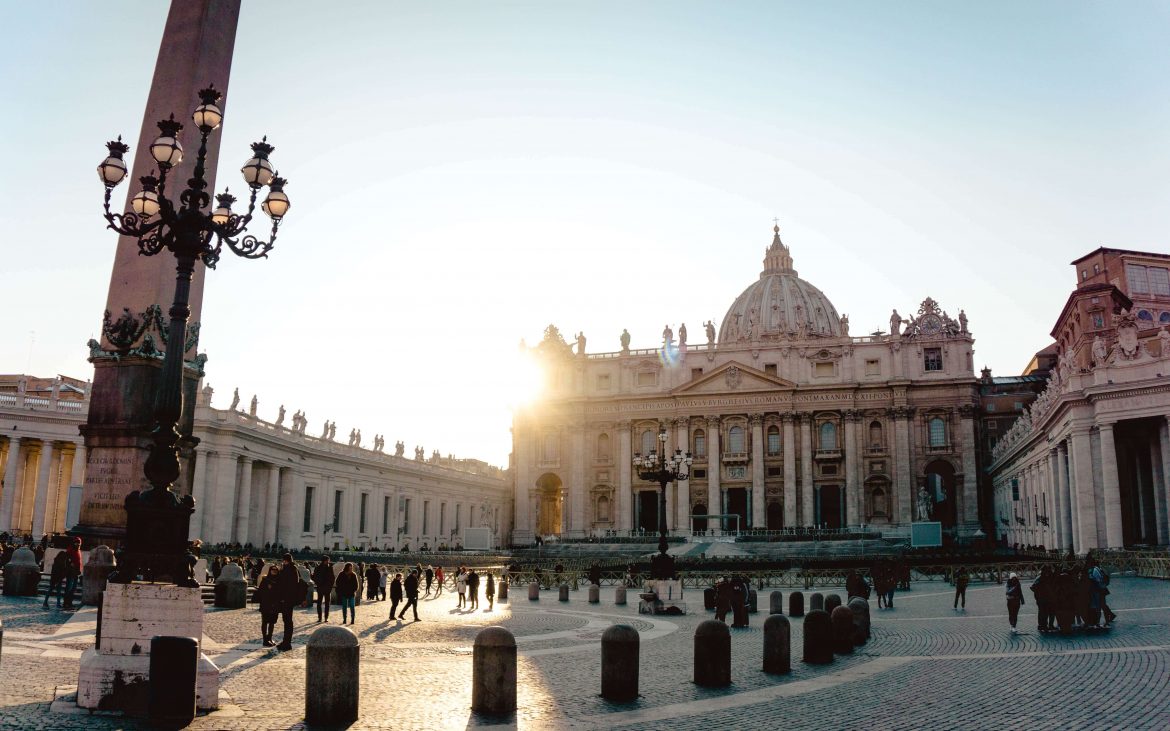 First revealed in 1512, the ceiling of the Sistine Chapel is a painted mural by Michelangelo and arguably one of the most influential artworks of all time. The mural depicts scenes from the Book of Genesis and the most famously the scene showing The Creation of Adam.

More than 5,000 square feet is covered by this mural and it continues to amaze thousands of tourists (including myself) and pilgrims every day.

To avoid disappointment visit the Vatican during the week and in the morning, if possible. Queues and crowds tend to be busiest after 12:00pm on weekends and the Vatican closes early on Sundays. 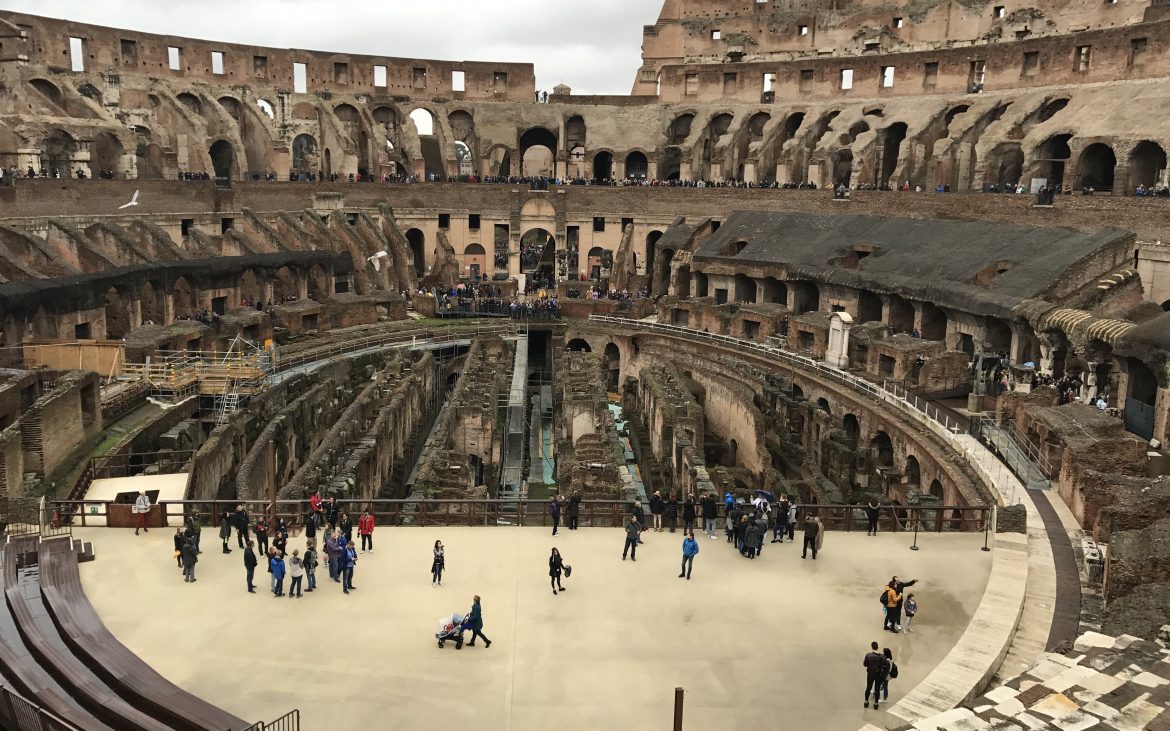 For a change of pace and scenery, the Colosseum should be next on your list. Learning about a history of gladiators battling to the death on stage as well as extravagant shows of exotic animals, live music and props, is most fascinating.

Built from mostly glossy white marble, stone and concrete, the Colosseum was truly outstanding. It stands proudly in the centre of Rome, 48 meters tall and 156 meters wide, with a base area of six acres. Built between 72AD and 80AD, by the manpower of over tens of thousands of slaves, the Colosseum is the largest amphitheatre in the world. 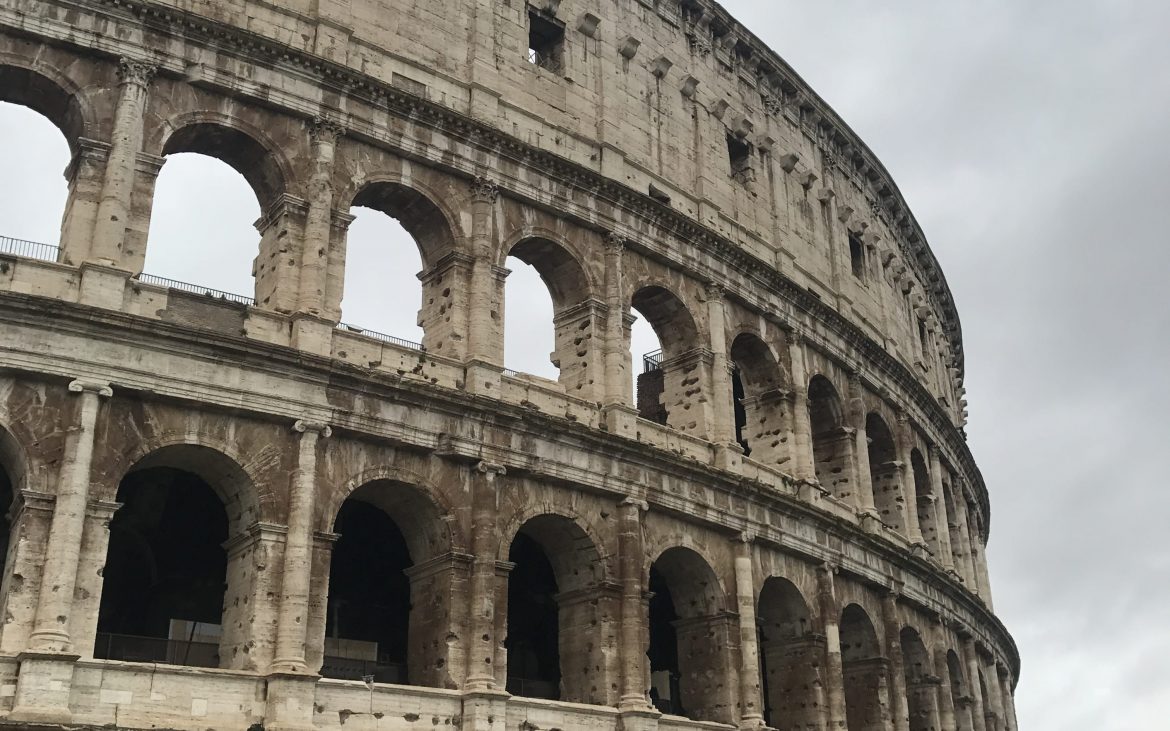 Go to the Opera 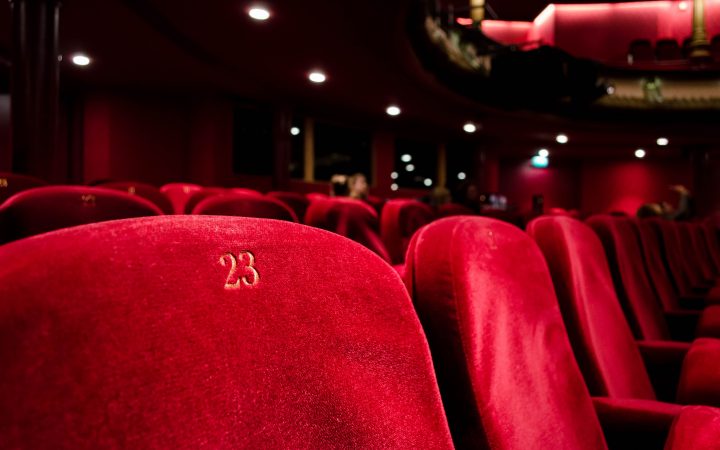 For the romantics out there, much like myself, why not book an Opera during your stay? It’s a real treat to get dressed up in your finest wear and visit the opera. After all when in Rome, as they say.

If you are lucky enough to find an opera in the Planetario, an ancient Roman planetarium, most definitely book to go. They only open it once a year and it’s such a magical experience to watch the performers and listen to the opera band play under the stars.

However, if the Planetario isn’t open, the Teatro dell’Opera di Roma have operas and ballets on all year round and to watch the performance in the pretty red cushioned seats and gold trimmed curtains really makes for a special evening.

Walking tours are a great way to explore a new city, especially Rome. As well as seeing all the tourist attraction you learn all about the city’s history and myths from professionals.

They usually take place throughout the week and are most often free (except for the tour guide’s tip at the end). You can easily find walking tours online and most hotels store lots of tour pamphlets.