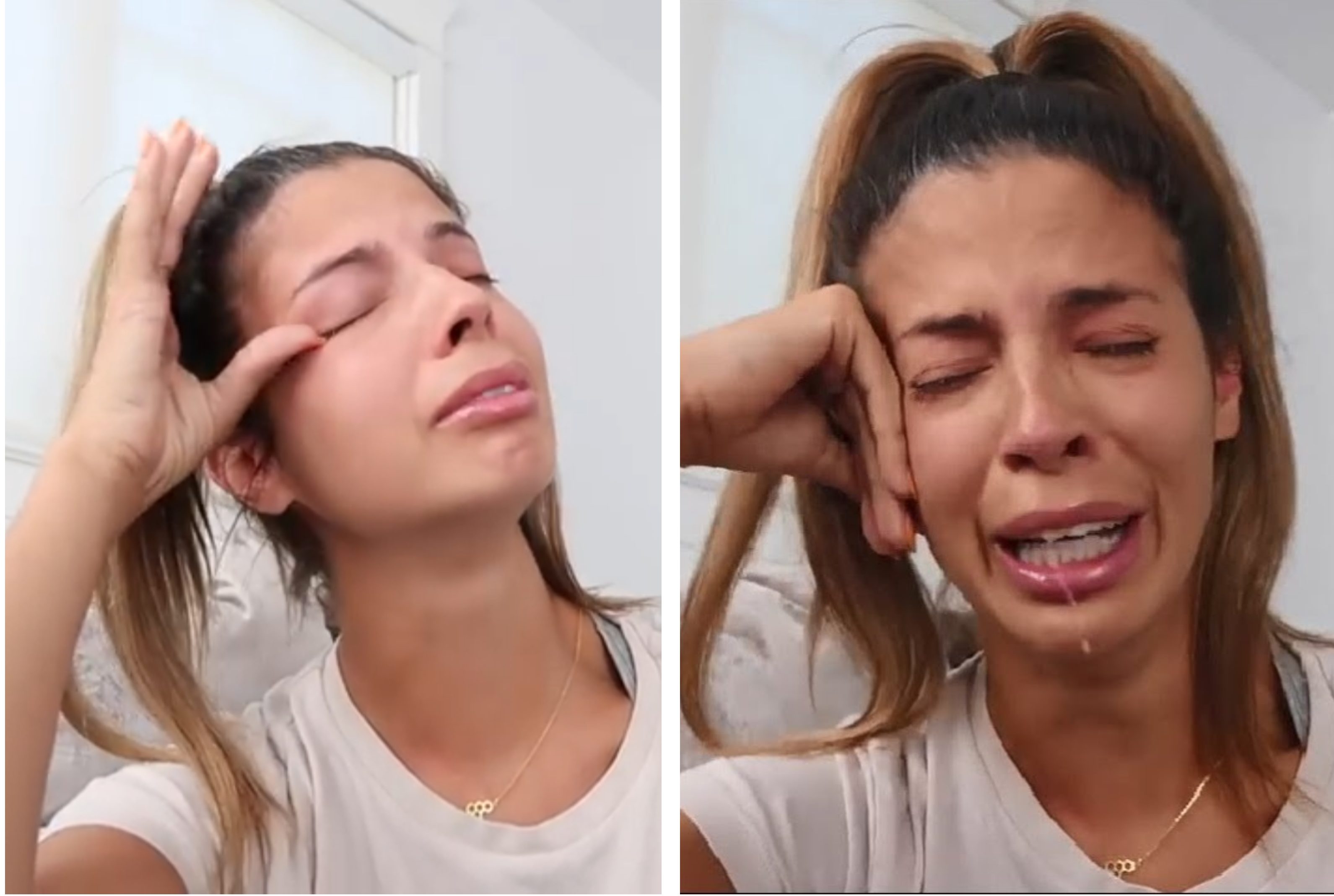 Wiping away non-existent tears, squeaking out words between her gasps and sniffles, Laura Lee spent four minutes and 44 seconds trying to salvage what was left of her diminishing fan base.

After her controversial tweets were exposed, Lee lost well over 500,000 YouTube subscribers, various lucrative brand deals and was ostracised from the online beauty guru community. 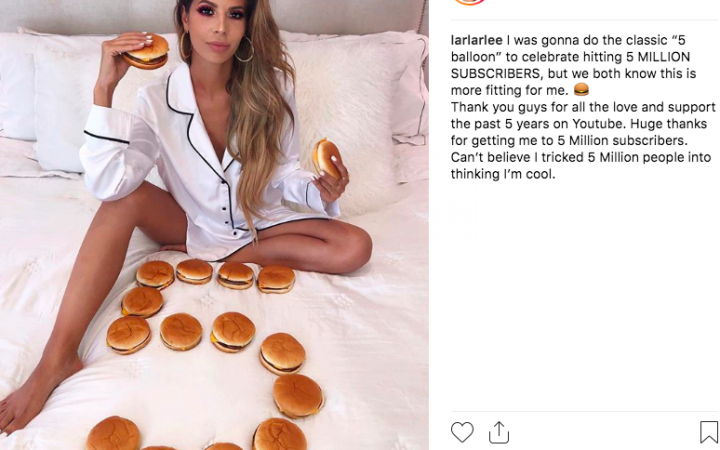 Tweeting various racist remarks and jokes, Lee outraged many with her lack of respect and hypocrisy. Her tweets, the most circulated of which read “tip for all black people if you pull ur pants up you can run from the police faster #yourwelcome”, disgusted many, especially as they were shared closely following the highly publicised shooting of Trayvon Martin, an African American teen. After having only recently been involved in snubbing a former friend and fellow YouTuber, Jeffree Star for their racist past, her hypocrisy did not go unnoticed by netizens who unearthed her tweets from 2012. 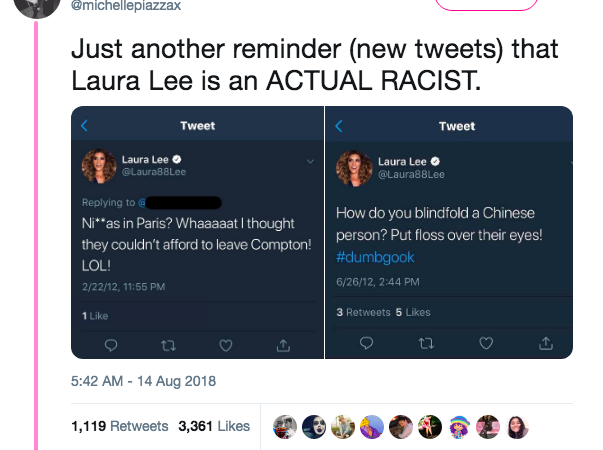 Laura Lee’s racist tweets were shared all over twitter [Twitter:@michellepiazzax]

Lee was considered an established, mature and business-savvy member of the online community. Her comments were seen by many as ignorant and insensitive and did not go unpunished. Eventually deactivating her Twitter account after posting various apologies, the true extent of the consequences of Lee’s actions were only seen over the next few days.

Before the controversy, Lee had just celebrated gaining five million followers. Over the following weeks, it’s estimated that her followers dropped to 4.5 million. Brands including Colour Pop, Morphe and Ulta all cut ties with Laura in the aftermath of the events. Although there was a fairly unanimous agreement to ‘cancel’ Laura Lee when her outrageous comments came to light in August of 2018, the lines between right and wrong aren’t always so clear.

The act of exposing someone online is becoming increasingly frequent, especially as we begin to log onto the world wide web at a progressively younger age. It is essentially unearthing and sharing things people have done or posted in the past – and it’s usually not good. It could potentially be considered a form of trolling, as ultimately, the aim is to create some kind of discord and outrage from the online community. In an age when everything stays online for eternity, everyone can be held accountable for their actions, no matter how long ago they were done. With this in mind, a question of fairness comes into play. Nowadays, with many tweens online, is it fair that the content of someone’s character is decided on a passing thought they shared when they were twelve? 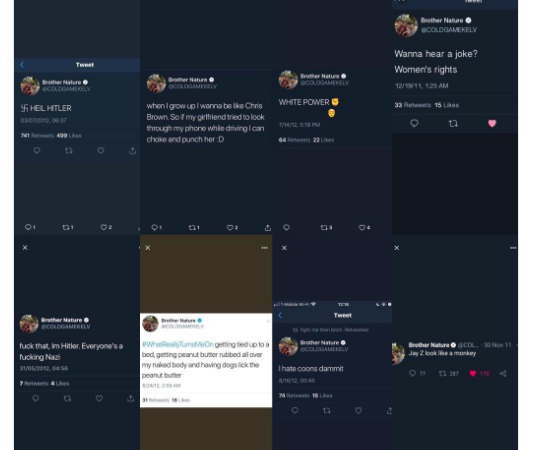 A number of Brother Natures tweets were unearthed [twitter: Khaliddd_]

This is what happened to Kelvin Peña, better known as Brother Nature. Shooting to fame for his lighthearted and comedic videos in which he interacts with local wildlife. Along with co-star Canela the Deer, he became a much-loved internet star, even setting up the Everybody Eats Foundation which helps to feed families globally. However, his reputation came close to being tarnished when some of his old tweets came to light in 2018.

The posts consisted of hateful and insensitive comments and didn’t initally go down well once being uncovered.

But this was where the similarities between Lee and Brother Nature’s stories end. Many were quick to defend the now twenty-year-old. Being only twelve when the tweets were shared, people highlighted how unfair it was to still hold him accountable for his words. Peña was quick to respond to the controversy with a heartfelt apology:

“I woke up this morning to seeing my old tweets resurface on my timeline and my heart dropped. I started using Twitter when I was twelve years old, I was very impressional, and I was seeking attention. I am sorry to all of the people that I have offended and have let down. I apologise for 12-year-old Kelvin and take total responsibility for my words. Everyone changes, everyone learns, and everyone makes mistakes.

“That’s why I spread so much positivity with this platform I was given, to be a role model for the kids. I hope that all of my friends, fans, and followers truly understand and believe that I have evolved as a human being and I lead with love. I was a child and am now a man asking you to accept the apology of a young boy,” he tweeted. The sincere apology in which he acknowledged his wrong-doings was mostly well received and his following continues to grow. 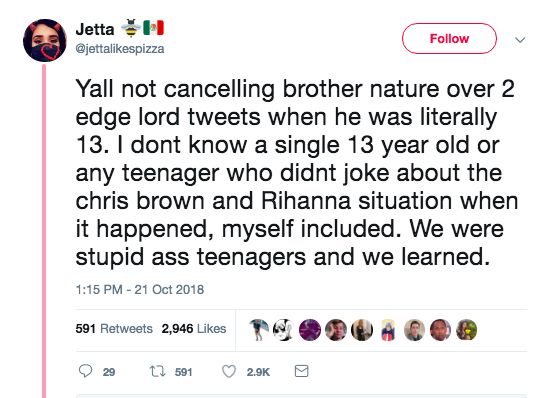 Many netizens questioned and criticised whoever took the time to scroll back through over half-a-decade’s worth of tweets to eventually find Brother Nature’s twelve-year-old ramblings. Countless online influencers, and even some celebrities, no matter how large or small their following, have been ‘exposed’ through this type of intense digging with varying outcomes. With this now such a common occurrence, the issues of morality come into play – on the side of both the exposed and the exposer.

Should people’s lives and livelihoods be affected by things that they’ve said or done years prior? It’s not like these are the only people who have ever made a joke in bad taste, they happen to be the generation that has it all publicly archived. Significant amounts of time and effort goes into exposing someone influential. Most influencers need to post multiple times a day on various platforms to keep their audience interested. Considering this, someone would have to go out of their way to do a lot of digging to find most of the posts that have disgraced many celebrities and online personalities.

However, it’s not just celebrities who can be a victim of digging trolls. While being exposed is a fairly common outcome for those who are of a more influential status, it’s not the only consequence that could occur from digging. In the digital age, anybody could be the victim of trolling, non-consensual image sharing, and deep fakes.

Dr Zoetanya Sujon is a Senior Lecturer in Communications and Media at the University of the Arts London (UAL), her research looks into critical and social theories in relation to digital culture, social media, and media and communications.

She thinks there are clear differences between the cases of Laura Lee and Brother Nature: “When you look at the representation of women and men as celebrities, and in magazines and newspapers, it’s been acknowledged that women are publicly treated much more harshly. Women are the ‘train wrecks’ while men are ‘troubled’ or ‘needing help’,” she told us.

“Trolling is often understood as something that is anti-social, invading privacy and breaking boundaries of trust. It’s created a territory in which if you put yourself in the public spotlight there is a fairly sexist and racist expectation concerning what sorts of trolling is considered appropriate. If you put pictures up online, there’s somewhat of an expectation that you should have expected [some form of trolling]. It’s almost victim blaming.”

“Women are publicly treated much more harshly. Women are the ‘train wrecks’ while men are ‘troubled’ or ‘needing help’.”

When discussing how trolls unearth someone’s old posts, Dr Sujon says that “your digital footprint is very pervasive and hard to keep track of.” Therefore, digging often just takes some patience before something a troll would consider useful pops up.

Referring to the writing of Jon Ronson, Dr Sujon mentions the “explosion in the reputation management industry.” There’s been a boom in the numbers of people working on people’s online identities. “I guess this points to the fact that we need to do this. When you’re twelve what you’re going to do online is going to be very different to what you’re going to do when you’re an established adult,” she continues.

Deep fakes is a newer phenomenon which is presenting a similar problem that non-consensual image sharing had done previously. Deep fakes use AI (artificial intelligence) to digitally manipulate videos and images. It can make people look like they’re doing or saying something they’re not. It’s been used on politicians, celebrities and everyday people like you and me, and can have devastating consequences.

Dr Sujon told Artefact that “there is no formal policy, support, or protection from it as from a legal perspective it’s not seen as something that can hurt people.” Technology and online culture are changing at such a drastic pace that the law simply has to try to attempt to keep up.

Regardless of whether it’s done with noble or nefarious intentions, trolling, digging and exposing only seems to be getting more prolific. In a similar effort, internet users and policymakers are beginning to become more tech-savvy and are making active efforts to protect themselves from it.

Ultimately, Laura Lee lost brand deals, but she still has over four million YouTube subscribers and (at time of writing) her latest YouTube video has clocked up over 428,000 views in three days.

Perhaps there really is “no such thing as bad publicity.”