House of Daze and the Norwich drag scene 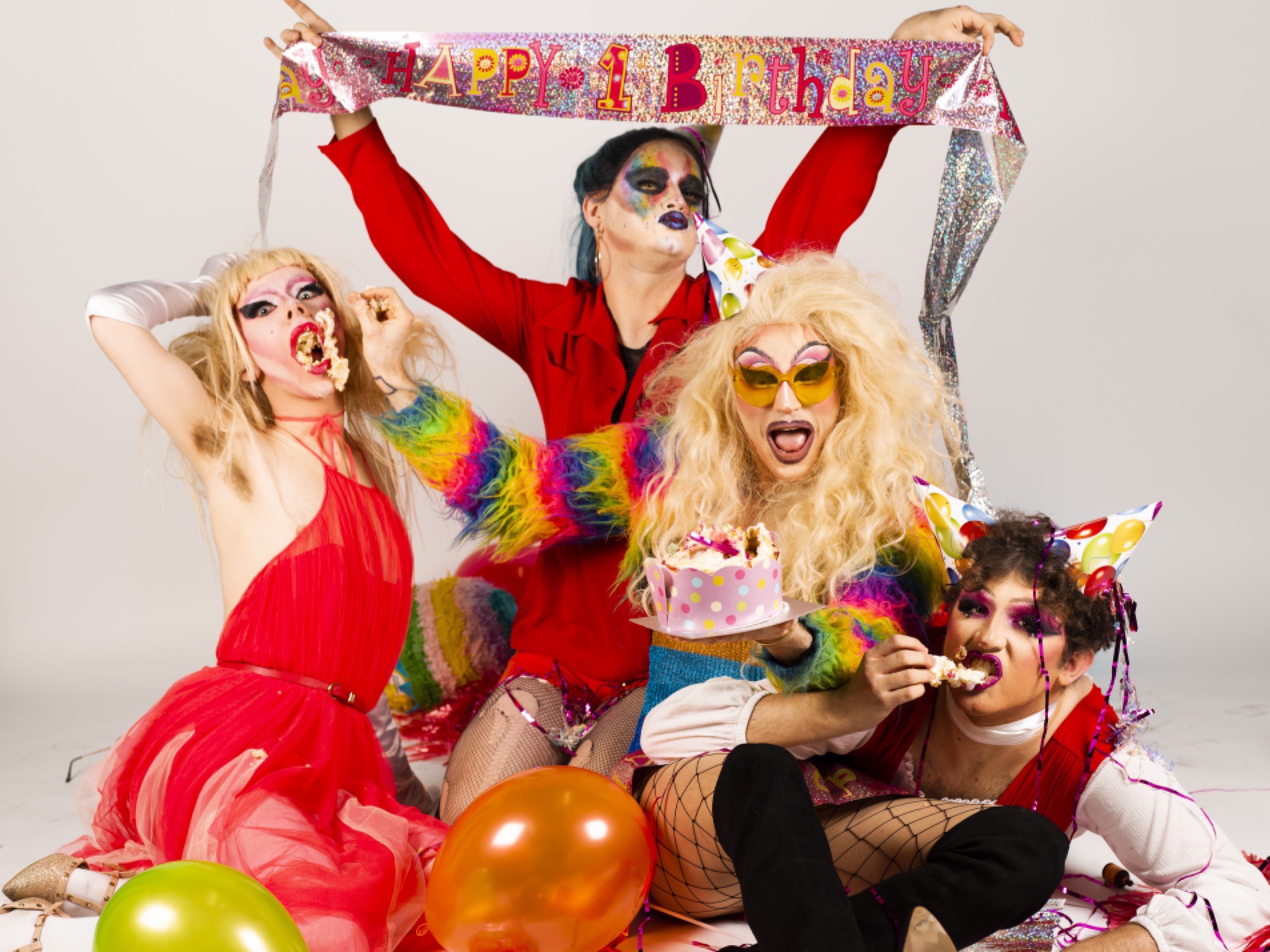 Norwich is renowned for its Gothic and atmospheric cathedral, fragrant and serene gardens and its acclaimed universities. However, what people might not be aware of is the thriving drag scene that is developing behind the scenes, gradually leaving a distinct mark on they city’s nightlife.

The Norwich drag scene is in capable hands, as a group of performers who call themselves House of Daze are following in the footsteps of collectives like The Rose Bud Club. They operate through their own drag house have been participating and organising events with a set of shows titled Take The Weight Off Your Mascara.

House of Daze comprises of five core members (though, they are always open to new members and performers); Sylvia Daze (Josh Javes), who acts as the main host of the nights on the mic, Blazing Rose (Jess Kirby), Bishee Barnabee (Brandon Chaskin), Liv (Oliver Saunders) and Devil Child (George Hellings). 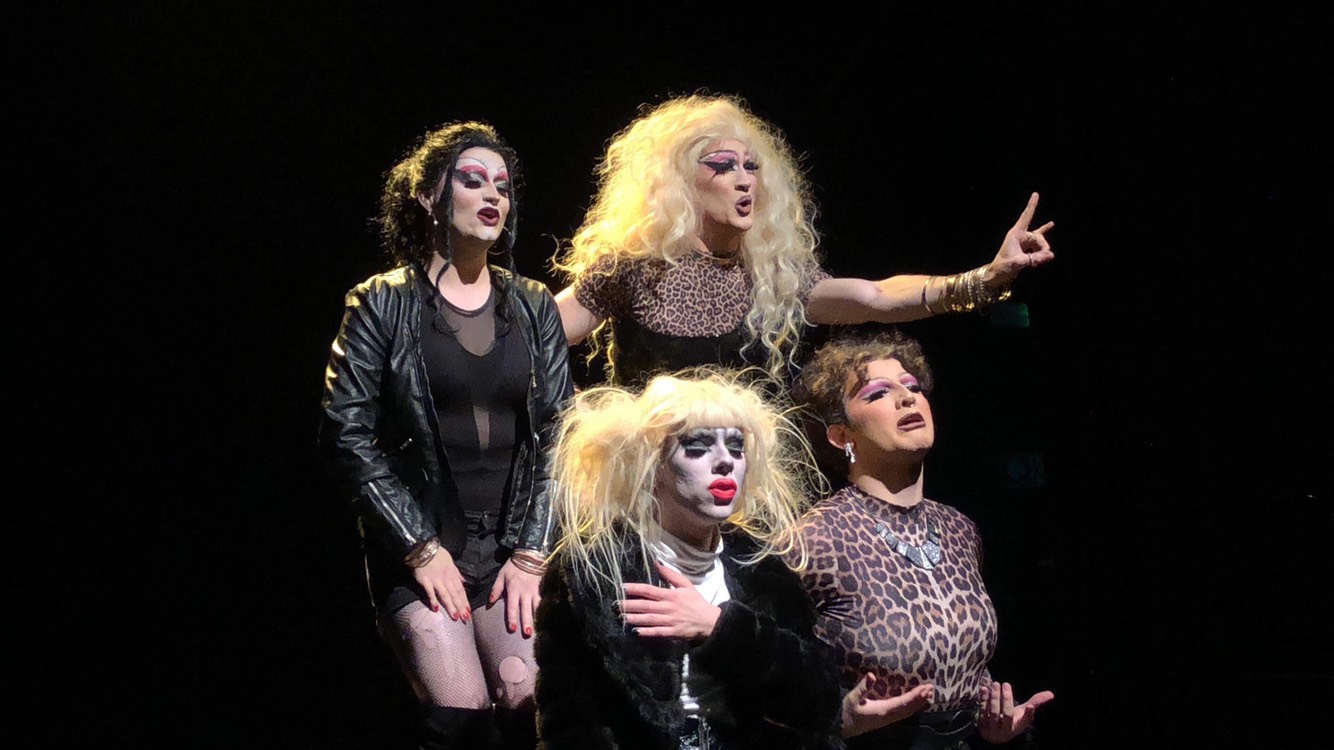 As they prepare for an event that celebrates their first birthday as a group, Artefact caught up with them to hear about aspects of drag, their influences, how the scene has grown and even how to get involved in the world of drag.

We were curious to learn how the members discovered drag and where House of Daze found its origins. Liv (Oliver Saunders) was happy to give some insights: “On my Fine Art foundation course my friends were talking about RuPaul’s Drag Race, and said I’d love it! I gave it a try as season eight was on at the time and was fascinated by the transformation from in confessional to the queen on the main stage.”

We were familiar with the series and its popularity, though Liv also noted that “despite it being problematic, Drag Race is a great introduction to queer culture and gender expression; it is important queers continue to discover drag beyond the show though. I did by attending parties and performing in shows, meeting ‘real life’ drag performers, especially British performers. British drag is far more punk than American drag.”

The natural progression of questions led to us asking the members on how they got into performing the actual shows. “The initial inspiration came on the eve of 2018 when Sylvia, Bishy and Blazing Rose were having a new year kiki, their resolution being to start a drag night in Norwich where everyone was welcome to ‘take the weight off’. From then it has been a snowballing effect of themed shows, catwalk competitions and a loyal audience that keeps us coming back for more.”

“I had no idea the drag scene was so big, it’s just happening behind the scenes without anyone knowing, but it’s huge!”

The individual and distinct styles of drag that the House of Daze members have developed have come gradually. As performers, they all branched off based on their personalities and personal tastes, as is the norm with any form of art.

“When we come together on stage to do the group numbers we manage to project a cohesive sense of acceptance, love and positivity with everyone there despite all of us having different performing styles. This has become a staple of the shows and really represents what we are!”

The Norwich drag scene was not something we were familiar with before the interview, and when sharing this with the collective, they admitted that they weren’t initially aware of just how many people in Norwich were interested in starting drag either, with ‘Devil Child’ enthusiastically musing, “I had no idea the drag scene was so big, it’s just happening behind the scenes without anyone knowing, but it’s huge!”

However, the effect the shows have had on the community was soon made clear to them, as through their regular appearances at the Birdcage, they generated an energy that the queer population of Norwich have gravitated towards; particularly those wanting to do drag. The shows have attracted not just other students but some mature queens and even teenagers too – as ‘Devil Child’ puts it, “Drag is for everyone!”.

The members, Liv especially, noted how much the scene had grown: “Since we started Take The Weight Off Your Mascara (TTWOYM) in February 2018, there have been several other shows and events in Norwich, such as Fever, produced by Black Shuck Creative which showcases the London’s hottest names in drag. 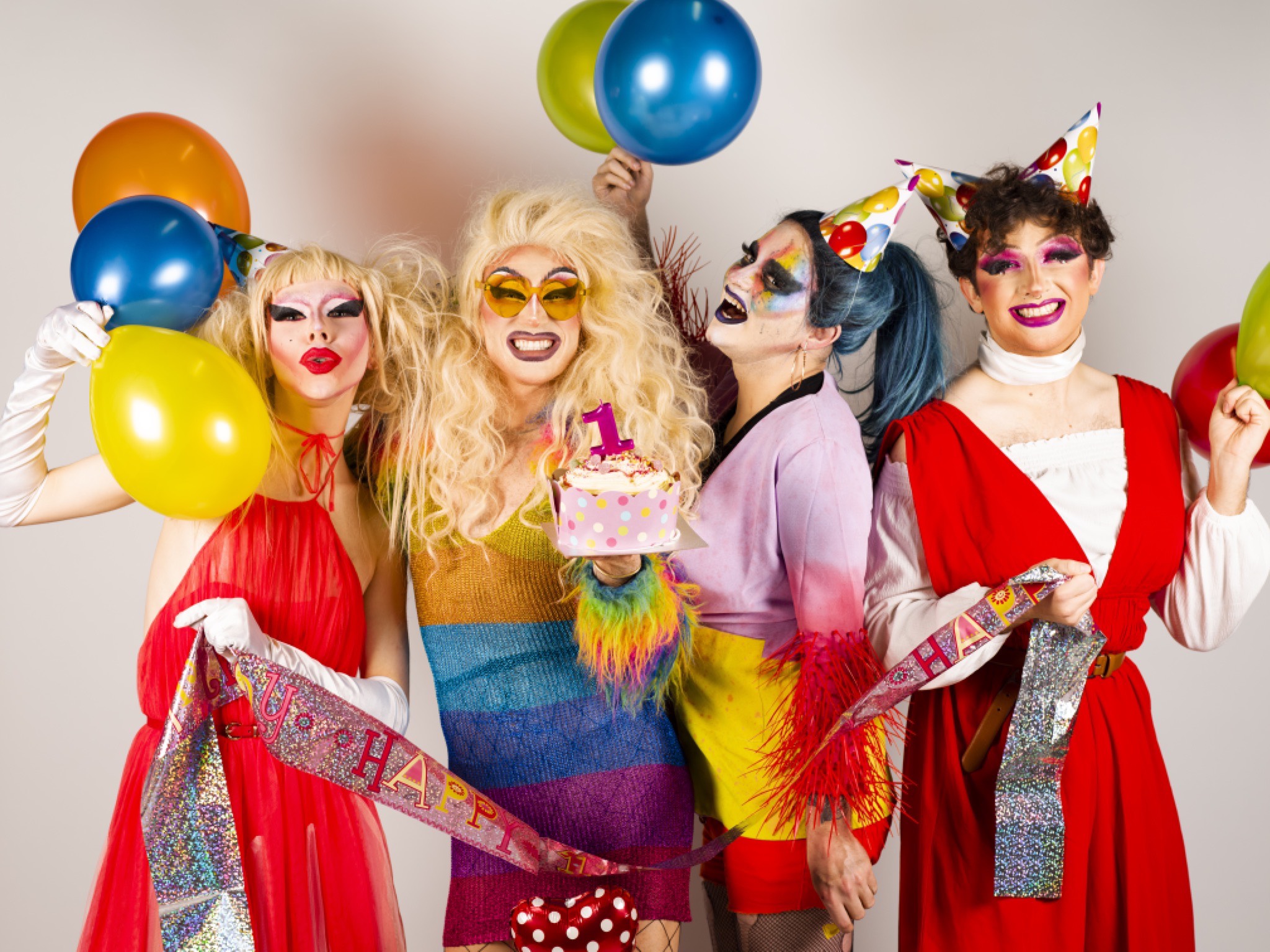 Expanding on this, we asked if members had ever heard local community discuss the shows, “I think a good sign of popularity is when you overhear people talking about ‘the House of Daze‘ or ‘the drag show at the Birdcage’. Last week at Norwich Playhouse, ‘Liv’ and ‘Devil Child’ were tapped on the shoulder by a lady who had been to our shows, she had recognised them out of drag and was glad to see them. Beyond the shows, the collective is often reached out to by local businesses and creatives looking to collaborate.”

‘Devil Child’ took us through the House of Daze’ most recent endeavours: “We had our busiest and most glamorous event yet with our recent takeover of the Birdcage on New Year’s Eve for a Studio 54-themed party. This was definitely a milestone for us with an explosion of family, friends and TTWOYM newcomers gathering for one of our most energetic nights yet which had a blitz of a show followed by a party that set 2019 off right!

“Even more recently, In January 2019 we took to the stage of the Norwich Arts Centre for NUA Students Union ‘Winterfest’ party. The size of the stage and a fabulous lighting technician made our show even better, some really Beyoncé at Coachella vibes going on.” 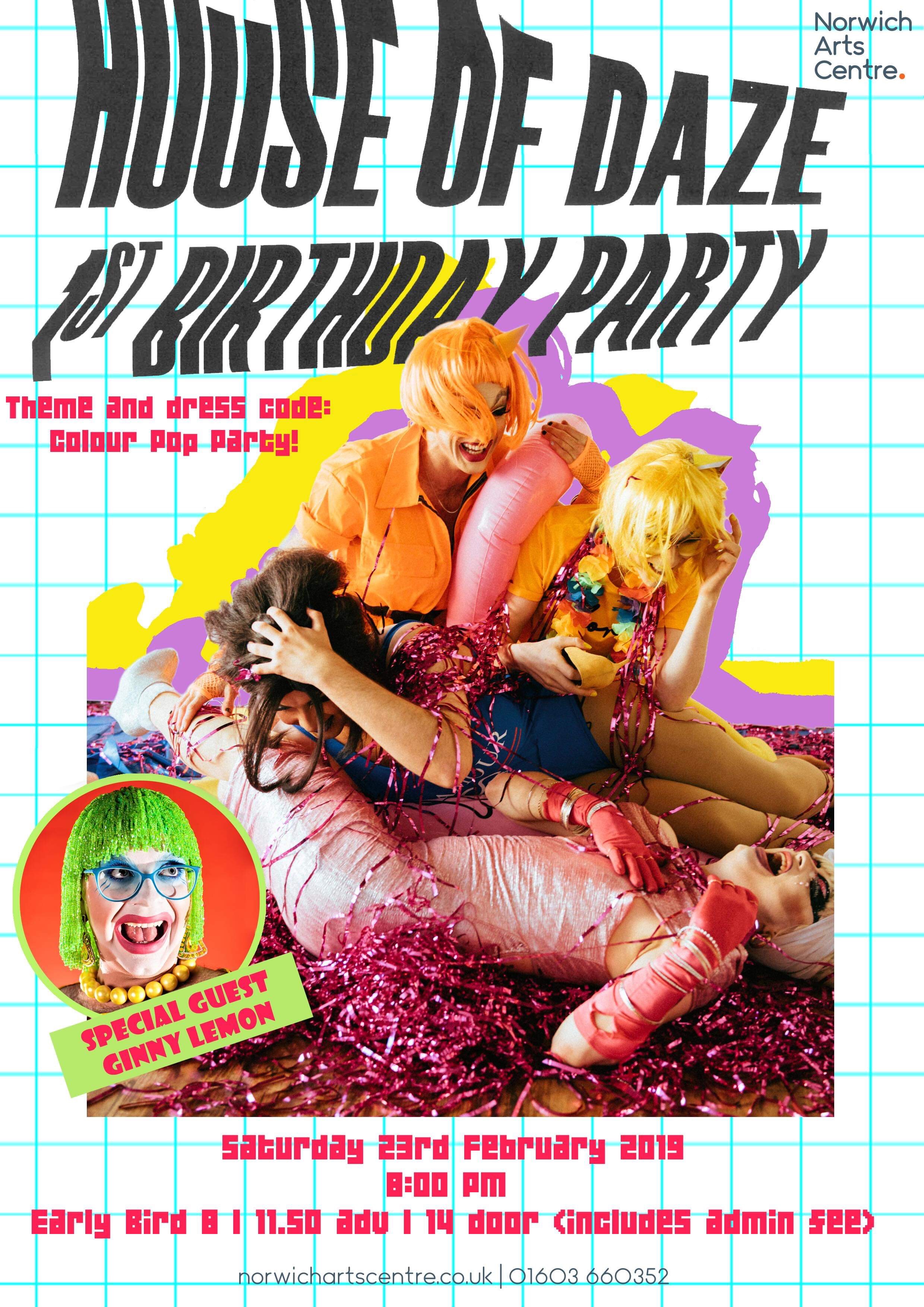 Artefact was keen to see if there were any problems that came with hosting these shows. The House of Daze members told us: “If anything it’s the influx of people wanting to perform. Although there are more events with drag occurring in Norwich, there is always a large group of artists seeking a performance spot.

“With our night being once a month, and already having five performers in our group, it can be tricky to accommodate other performers – but we try our best to showcase local performers to their audience. That’s it really, besides getting ready on time, glueing nails and fucking up a few wigs in the process.”

A thought that might come to the mind of our readers when reading this feature is ‘If I wanted to get into drag, where should I start?’

Luckily ‘Devil Child’ had some great advice, “Your best bet is going to a show. There’s a plethora of drag shows and queer cabaret all over the UK so attending these with a few friends, who may be new to it as well, will allow you to slowly (or quickly) immerse yourself in going out and celebrating your freedom of gender expression the way you wish and however you identify.

“In turn, you’ll be supporting your local queens, performers and queer artists and are likely to meet people who inspire you to break out of your comfort zone and then practice-practice-practice. You might find it isn’t what you wished for when you first get in drag but trying it out in a safe manner in queer-friendly spaces is a perfect place to start.”

We concluded the discussion by asking the group what their plans for House of Daze: “Our main goal in the future is to continue a queer revolution in Norwich, providing the spaces for our community to thrive, love and express themselves freely.

“In the meantime, we do have our first birthday party, again at the Norwich Arts Centre. It will be a colour pop party to celebrate one whole year of taking the weight off our mascara. It is our biggest show to date, with special guests like Ginny Lemon, brand new group numbers and features the family of drag artists who have joined us since our debut.”

House of Daze and the Norwich drag scene