Even though it’s now well-established, London’s innovative minds are still hard at work in the heart of the financial district, Canary Wharf, within the borough of Tower Hamlets.

A new app has now been launched to reinforce eco-friendly habits throughout the ‘micro-city’. Despite the borough being identified as ‘one of the least eco-friendly boroughs in London’, sustainability is at the core of Canary Wharf’s mission.

For example, the estate has a campaign called Breaking The Plastic Habit. This initiative came out of research that identified plastics “as the single biggest issue” by commuters, residents and visitors. As a response, there has been an array of new eco-friendly concepts implemented.

The scheme “is all about using this unique micro-city of Canary Wharf, really to pilot new technologies, ideas, spark innovation and really encourage collaboration right across Canary Wharf,” as described by Nick Green, Versis Head of Strategy and Development, during the initiative’s Breakfast Briefing in January 2019.

Nick explained that the area has a “unique position” as it is privately-owned. As such, Canary Wharf Group have been able to trial ideas which can then be implemented on a bigger scale “to reduce our reliance on plastic”.

Canary Wharf aims to become the first plastic-free commercial community in the world. Already, the micro-city is buzzing with eco-friendly technology and solutions. Here at Artefact, we explored seven of the innovative concepts which have been implemented throughout the estate. 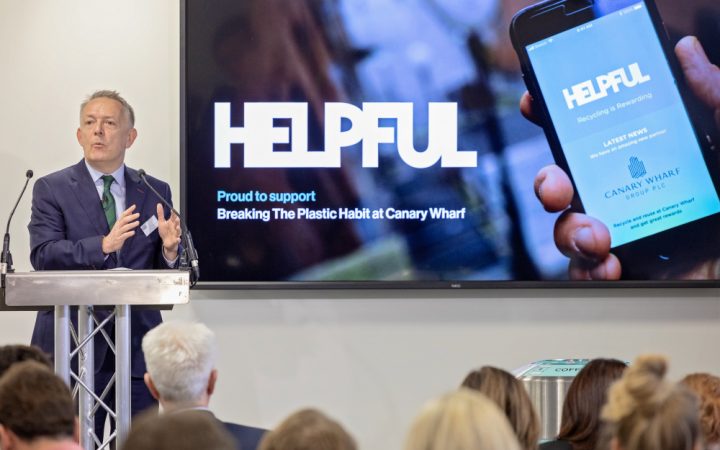 The world’s first plastic recycling and reward app has now been launched. Users are able to reuse and recycle products within Canary Wharf in exchange for ‘HELPFUL coins’. The more coins you collect, the more you can buy from their rewards shop.

In the long term, the app is intended to ‘embed behavioural change’ as described by John Garwood during its launch.

Using the HELPFUL app is simple. When you have a disposable coffee cup, merely take a picture, and the app will detect two things. Firstly, which materials the cup is made from. Secondly, the app will use your location to identify the closest place to recycle it correctly.

Canary Wharf implemented smart bin technology onto their pre-existing bins. This tech allows the consumer to scan a QR code and instantly receive a HELPFUL coin. The app provides access to the HELPFUL box to purchase sustainable products from participating businesses. For example, a reusable coffee cup or steel straws from Surfers Against Sewage.

Alternatively, people can use the app to reinforce their sustainable habits. Participating retailers throughout Canary Wharf will provide a code to scan via the app when you reuse a coffee cup, water bottle, plastic bag or food container. All of these actions will enable you to collect more HELPFUL coins and ultimately, rewards.

In 2018, Canary Wharf introduced refill water bottle stations with a smart tracking feature that calculates its use. Seven refill stations have been installed throughout the shopping malls. Their expectations were set high, with the ambition to reduce 100,000 plastic bottles.

When the refill stations were installed, Mike Winter, Managing Director of MIW Water Cooler Experts told the press, “This will be the first time fountains which can track usage are installed in UK shopping malls so it will be exciting to see how many single-use water bottles we are able to replace with refills.”

Canary Wharf Group revealed to Artefact that a total of 57,410 bottles have been refilled to date, just over half a year later. Each refill station has the capacity to chill, filter and dispense up to 680 bottles per hour. The design is modern, fast and hygienic.

Most significantly, the design includes a “the bottle filler is suitable for use by those with visual or physical disabilities,” notes Sam Williams on behalf of the MIW Water Cooler Experts. This feature is due to the hands-free operation and an automatic start/stop sensor.

“The refill stations are energy efficient and cost very little to run. A single machine can cost only pennies a day to provide chilled, filtered water,” Sam noted. “Canary Wharf is a great location for these refill stations, the estate has high footfall from both shoppers and commuters, and so we were delighted to work with them.”

“We hope this helps even more people make the switch to carrying a reusable bottle,” Steve Greig, Co-Managing Director, Canary Wharf Management, said in their press release. “When you have an opportunity to save cost and the planet it’s an easy decision to make.” 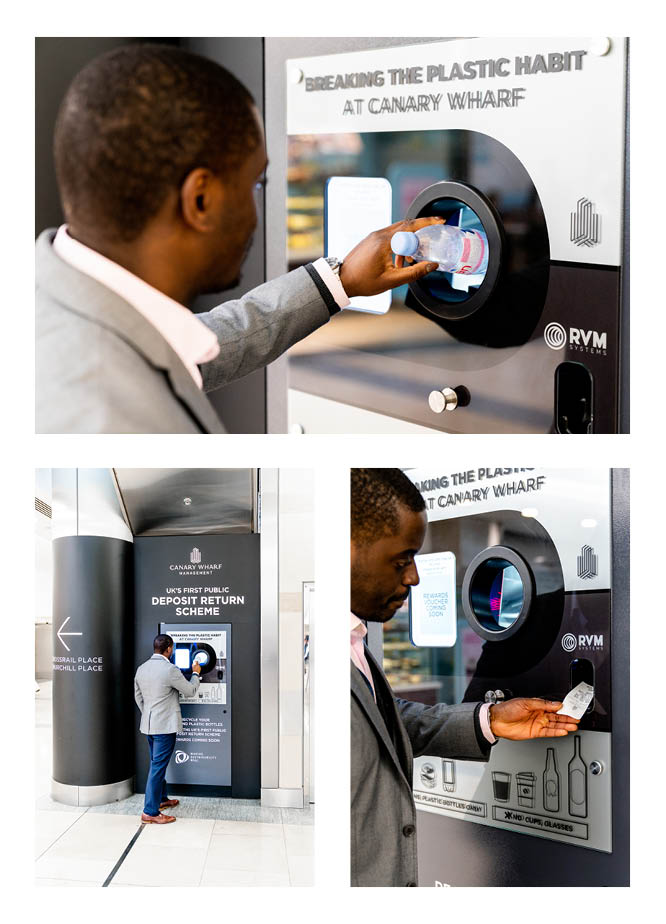 The UK’s first Deposit Return Scheme, neatly placed next to Waitrose in Canada Place, has accumulated a total of 9,055 recyclable items. The device automatically distinguishes, separates, collects and treats the materials using it’s integrated 360-degree scanning recognition system. As an incentive, the sophisticated machine produces vouchers and discounts in exchange for used plastics and metal.

Currently, 13 billion plastic bottles are sold throughout the UK every year. In London, each adult consumes an average of 175 plastic water bottles a year. Yet, only 57% of these bottles are recycled. Ultimately, 700,000 bottles are littered every day.

In 2003, a similar scheme was introduced in Germany which proved to be extremely effective. On average, 99% of used cans are now recycled. In Norway, 97% of the bottles are recycled. As such, Canary Wharf has set out to follow suit.

The Government is in the process of setting out regulatory measures for a DSR scheme to be introduced at the beginning of 2020. However, conflicting opinions have revolved around what size bottles should be included in the system, so the Government has issued a 12 week consultation period which will run until May 13, 2019.

Canary Wharf Group told Artefact: “There is no question that recycling rates in the UK need to drastically improve, but we’ve got to move beyond just better recycling, we need a step change to create a true circular economy. Together we must move away from our current linear throwaway culture.”

“An ‘all-in’ model for DRS would be a very positive step towards circularity, and Canary Wharf is well positioned to support any scheme the Government puts in place. However, we all need to focus on improving awareness, and eliminating unnecessary single-use plastics altogether.”

Thanks to Strawberry Energy, there are four smart benches throughout Canary Wharf’s estate. These benches are not only a resting point for visitors but use solar energy to charge phones, facilitate wifi and transmit weather data to your phone.

These solar infused benches can recharge up to 2,000 phones a day, for ten minutes per phone. Visitors can use the USB port or alternatively, tap into the Qi-compatible pad for cordless charging. Just press the start button to begin charging. However, the best perk is that this service is completely free.

However, come rain or shine, this solar-powered phone station remains in action. Each bench has incorporated a back-up battery system which kicks in when the LED light goes off. The battery’s capacity is over double of the solar-power, ensuring guests can rely on these smart benches. 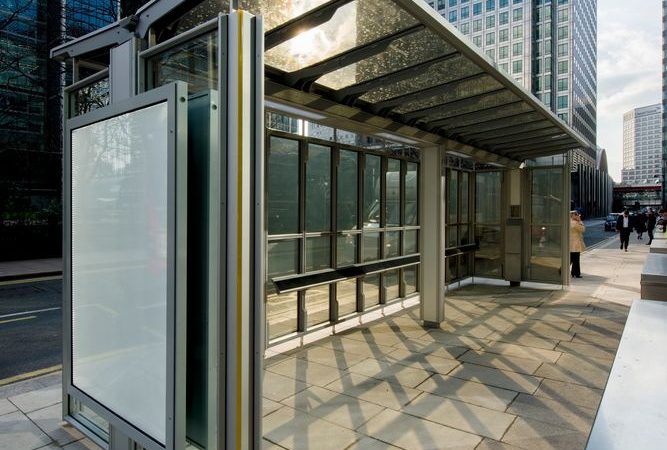 This solar infused bus stop could power your apartment [Polysolar]

The UK’s introduction to semi-transparent solar-powered bus shelters was another ‘first’ for Canary Wharf. In April 2016, the ‘city within a city’ installed this experimental bus shelter to generate electricity throughout the estate and has successfully been doing so ever since.

Despite the British weather, this bus shelter produces a sufficient amount of energy to power the average London apartment. However, in this case, the 38.4kWh of weekly renewable energy operates smart signage and other infrastructure throughout Canary Wharf.

This clean and renewable energy is all thanks to the expertise of Polysolar, a Level 39 member, paired with Marshall’s street-furnishing know-how. The bus shelter seamlessly accompanies the estate’s appearance yet it’s functions are beyond beneficial.

Polysolar told Artefact that their photovoltaic glass was inspired by “The growing need to combine modern architecture with solar energy.” As such, they hope to “change the way people view buildings.”

“Ultimately our goal is to get our technology incorporated into modern city architecture including tower blocks and commercial buildings. Canary Wharf is an ideal place to help realise that vision, and we are working with the team to look at further opportunities.” 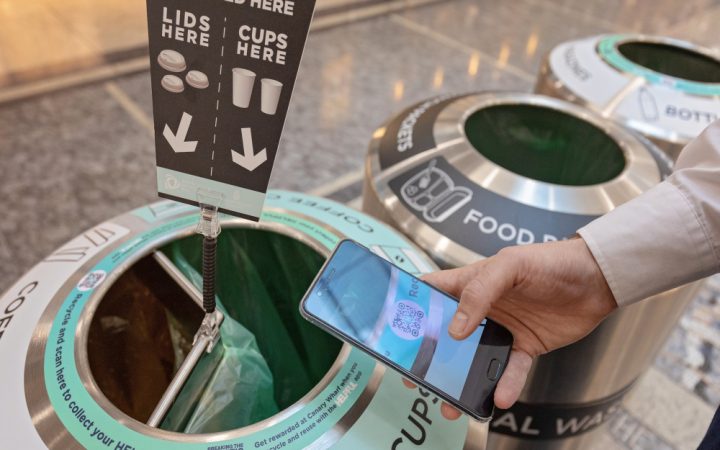 “Our Wake Up & Smell The Coffee Campaign has enabled more than 3.2 million single-use coffee cups to be separated from general waste and be recycled. In order to visualise that,” John Garwood said with a pause, “you could stretch all those coffee cups from London up to York.”

John Garwood, Managing Director and Group Company Secretary at Canary Wharf Group, admitted that they didn’t physically measure the distance with their 3.2 million recycled coffee cups. However, this staggering calculation demonstrates the impact of the compartmentalised bins.

Wharf Kitchen is a plastic-free food-court that offers a diverse cuisine. There is something for everyone; a taste of Caribbean jerk chicken, authentic Slovakian gyros or a good old American burger. Vegetarians need not look elsewhere as The Vurger Co, and other restaurants within the food-court provide a varied pallet to choose from.

John Garwood announced that with Wharf Kitchen fully underway, they are “calling for people to follow the lead” and implement the ‘plastic-free’ concept within their restaurants. Wharf Kitchen is tackling food service items that are often used when purchasing takeaway food. For example, packaging, straws, stirrers, sushi sticks and cutlery.

“Wharf Kitchen has been trying to that which is an agile problem in the whole single-use plastics area,” Nick Green, Versis Head of Strategy and Development, articulated. “Any packaging used there is fully compostible.” They are also ensuring that “the right food packaging goes in the right resource stream.”

Instagram user @djdeccy_ rated the food as an “Obvious 10/10,” saying that “the Vurger held well and the shake was incredible without being sickly, could easily have had another one. Really good location, perfect for a post-shopping scran.”

“My personal favourite [dish] is our chicken & waffles,” said Paul Hemmings, the managing director of Bird. “It’s the perfect blend of salty and sweet, soft and crunchy. We see more and more people try it every week.”

Paul and his team are committed to making their restaurant sustainable, claiming that, “Wherever possible, we choose to use ingredients and packaging that are eco-friendly,” he said. “We have made efforts to consolidate our supply chain to minimise the number of deliveries we receive each week.”