Scattered footprints of an endangered species litter the ground across the conservation. Each blade of grass represents another world, unimaginable to the naked eye – a perfect ecosystem.

Conservation programmes aim to protect wildlife species by allocating them a safe environment to live sustainably. In some places, however, the situation is critical. Rangers are noticing the impact conservation has on some of the species living within.

A perfect world, perhaps, not so perfect.

[pullquote align=”right”]African elephants are heading to be extinct within our current generations lifetime.[/pullquote]

Benedict Rickards is a zoologist student at Leeds University and has spent much of his time on exhibitions to complete surveys in conservations. In August 2018, Benedict visited Shamwari Private Game Reserve to conduct a survey, located 75 km (48 miles) outside Port Elizabeth, Eastern Cape, South Africa.

During his trip, he had a discussion with some of the rangers that worked in the reserve and came to discover that the ecosystems in these parks are being damaged.

Conservation projects were introduced to give animals, such as elephants, a safe environment, away from poachers and to manage their habitat. Rangers drive around the reserve to deter trespassers and keep track of the wildlife that lives within the premises.

According to the African Wildlife Foundation (AWF), there are approximately 415,000 African elephants still alive, but 8% are poached every year. With this current rate of poaching, African elephants are heading to be extinct in our current generations lifetime. 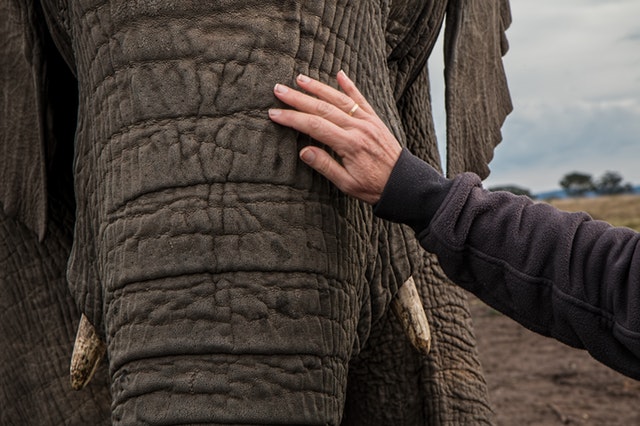 Thousand of elephants are poached every year [Pixabay:stevepb]

Ivory, found in rhino and elephant tusks, is sold on the black market. After days of tracking the creature, poachers kill and harvest the ivory by cutting into the flesh of the animal and removing it from their skull. Although illegal in many countries, poaching is widely practised. Ivory can be sold for tens of thousands of pounds, believed to be used for ‘medicines’, jewellery, crafts, musical instruments and even religious objects.

Removing ivory from an animal is gruesome. Benedict told Artefact about his experience, during an expedition through the Ivindo national park in Gabon in the summer of 2017. He described as being his  “most intense trip” and found it “emotionally and physically exhausting. Six days into the expedition, my team discovered a forest elephant which had been shot the night before. We took it upon ourselves to remove the ivory from the elephant to prevent the poachers from taking it and selling it on the black market.”

Some nature reservations, specifically in southern Africa, have started installing fences around their perimeters. In Botswana, Zebra migration has almost come to a halt as the barriers are restricting their movement.

“The impacts of this are not yet fully understood as fences have only recently been a part of the landscape, but it’s possible it could result in a complete ecosystem collapse for both the animals in the park and outside the parks,” Benedict told us. “There has already been evidence to show that zebras have stopped migrating between the nature reserve and elsewhere.”

National parks are often split between villages and other man-made infrastructures that are uninhabitable to certain species. Animals living within conservation areas don’t enjoy the same level of freedom as those in the wild. As migration is restricted inbreeding takes place, as it is difficult and sometimes not feasible to find new mating partners.

Inbreeding can cause many issues within species, impacting their genes and their ability to evolve. To prevent this from happening, nature reserves move the males between the parks to ensure a healthier population and discourage inbreeding. Very similarly done by farms, bulls are transferred between fields to provide genetic diversity.

A previous case study highlighting the problem is the lion population of 84 individuals in Hluhluwe-Imfolozi Park in South Africa; it showed severe inbreeding depression and crashed to 20 native individuals and their offspring between 2002 and 2004.

To save the population of the lions in the short term would be to introduce fifty lions that were at the age of being capable of reproducing, known by biologists as the ‘rule of fifty’, but this was suggested suitable only to those in captivity.

Some scientists suggest that to retain evolutionary potential long term, a population of 500 adults is required. Others believe that 5,000 is the number needed. Although the inbreeding depression is well established amongst biologists, some insist that it has been greatly underestimated.

[pullquote align=”right”]African elephants are fighting a battle where the odds are very much against them.[/pullquote]

“Inbreeding can lead to complete population collapse due to the build-up of deleterious mutations. The effects decrease the health of a population and can be so severe that they can cause extinction. These effects may be immediate or may take generations to become apparent,” explained Benedict.

Elephants are a prime example of how conservations are struggling to keep the gene flow occurring. With male elephants weighing upwards of seven tons, transportation becomes challenging.

The African Wildlife Foundation (AWF) believe one of the solutions to prevent extinction is to give elephants ‘room to roam’ by creating ‘wildlife corridors’. They aim to do this by speaking with communities and governments to section off parts of the landscape between national parks to allow elephants to be transported between them.

In some circumstances, they will purchase land and set it aside for conservation. Their motive for moving elephants around is predominantly to avoid poachers and allow for habitat management as it poses a long term threat to the population of elephants.

Benedict responds to the solution put forward by AWF by stating “it could definitely help solve the inbreeding issue if they’re linking two distinct populations, as the gene flow between them could help reverse the problems that inbreeding are causing or could cause in the future.”

But, he has doubts: “The thing about corridors is that you can never be sure that the animals will use them”, fortunately, he says elephants have a long life span so this issue “shouldn’t be too time sensitive but that can change with a lot of different factors. These corridors should go at least some way to solving the issue.”

Many people assume that evolution and genetics lead to elephants growing smaller tusks as it lessens their chances of being poached. This, however, is a misconception fuelled by ill-informed journalists, as the real reason for the change continues to be underreported.

“The tusk size reduction isn’t due to evolution, the elephants aren’t being selected for small tusks, they’re just not able to grow them as well if they are inbred,” Benedict argues. “A poacher may track an elephant for a number of days before they find it. If it has big tusks then great, they kill it, harvest and get paid. If it doesn’t have tusks, they kill it to make sure they don’t accidentally follow it again.”

Due to inbreeding, elephants are being hit incredibly hard. Their tusks are not growing enough, which is worrying as tusks are essential to their survival.

“They use their tusks for fighting so if they’re losing them it means they won’t be able to compete with other individuals,” Benedict explains.

Elephants are also within risk of not reproducing as often. Out of all mammals, elephants are pregnant for the longest amount of time, 22 months. So, being less fertile, having fewer offsprings and a lower likelihood of survival, means, African elephants are fighting a battle where the odds are very much against them.

By Sophie Patrick
2 Mins read
The Wildlife Photographer of the year is open at the Natural History Museum and is full of intriguing images from across the animal kingdom.
Culture

By Zeina Saleh
3 Mins read
A profile of Egyptian minimalist photographer Farida Al Bustani, who shares the journey of her art and her life.
Environment

By Atiyyah Ntiamoah-Addo
11 Mins read
We sit down with the influential writer and activist on climate justice, animal rights and alternative systems in fashion.