With so much information at our fingertips showing the mistreatment of animals, it’s hard to believe that anyone who’s made it through seven minutes of Earthlings can encourage any animal interference from humans.

And yet with an estimated 45% of households owning a pet in the UK, can someone who’s sworn off using and consuming animal products for the rest of their lives own a pet without feeling uncomfortable?

Sat in a quaint, vegan café, canary yellow hair matching her sunny smile, Portia Legge is the embodiment of a healthy, happy vegan.

Working at Lele’s in Hackney, the café where I met her and talked about her two cats, Sue and Sooty, over Oat Chai and a Soy Latte, Portia has been vegan for almost two years and vegetarian her entire life: “I’d been vegan for so long but there were still issues with the dairy industry, so I thought I’d just try it and it’s taken over my life.”

With almost two thousand followers on Instagram and a YouTube channel to boot, veganism surrounds Portia’s everyday life, but when I asked her to talk about the ethics of pet ownership, she admitted that it wasn’t something she had considered too greatly.

Despite objecting to the use of animal products, Portia feeds her cats with meat pet-food: “I haven’t spoken to many people about it. It’s not something that people usually question. 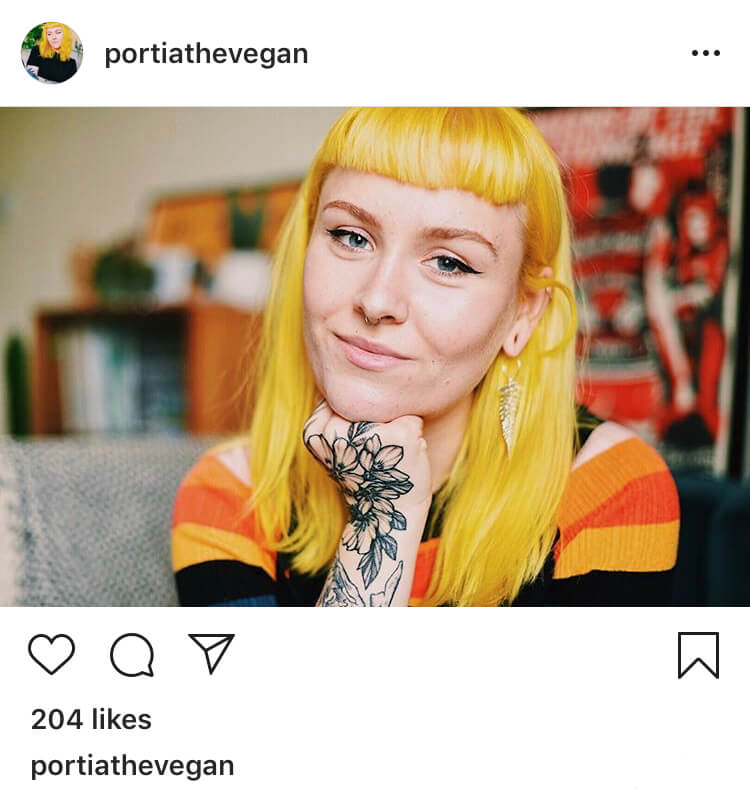 “I’ve only been vegan for almost two years, and [my cats are] so old and have various health issues. It’s gross having to touch the meat to feed them, but I’m not going to change their diets when they’re so old.”

Planning to move to Hackney with her boyfriend, Portia has plans to rescue a dog. “We definitely want to raise them on a vegan diet. Dogs are so easy, it’s so easy. I know so many people who have raised vegan dogs. If you do it well and do your research, you can’t go wrong with dogs because they can eat so many foods.”

PETA explains that dogs are not only omnivores but with the right food and supplements, just like humans, they can live healthy vegan lifestyles.

In fact, PETA – People for the Ethical Treatment of Animals – actively encourages transitioning your pet’s diet to vegan or vegetarian, stating that shop-bought pet food mostly consists of animal flesh that’s not safe for human consumption. Elisa Allen, PETA’s director claims that pet food’s meat “fall[s] into one of the categories of the four D’s — dead, dying, diseased, or disabled.”

Is it fair for us to make decisions for other animals?

Caitlin Kennedy, a vegan student living in London, also has two cats. Playing a big part of her childhood, Caitlin pets are also fed on a meat diet. “I never used to consider this, but having a pet is kind of weird. But I’d never buy from a breeder, I’ve only had rescued animals. I see it as doing a good deed.”

When I asked about her cats’ diets, Caitlin replies demonstrate concern: “They can’t choose, so I guess it’s not really fair. Also, finance wise, it’s so expensive. It depends on how available the products are. If I did a lot of research on it, I’d consider it, but otherwise no. It depends on the time, there’s so much happening in the vegan world, so it could be widely available in the future.”

But the ethics of owning pets doesn’t stop at what to feed them. So many decisions have to be made before having a pet for any animal lover, much less a vegan animal lover.

Many argue that humans have too much interference with the world around us. But does this notion extend to owning pets? While some people will believe it unethical to eat a dog but fine to eat a pig, is there any argument to support humans making the decision to put a pet down?

Portia’s childhood consisted of raising pets, meaning she had to deal with putting a pet down. “When I was younger, I had to put my dog called Roxy down. She was a Rottweiler. She got put down after someone put their hand through our letterbox. She didn’t need to be put down – who puts their hand through a letterbox?” 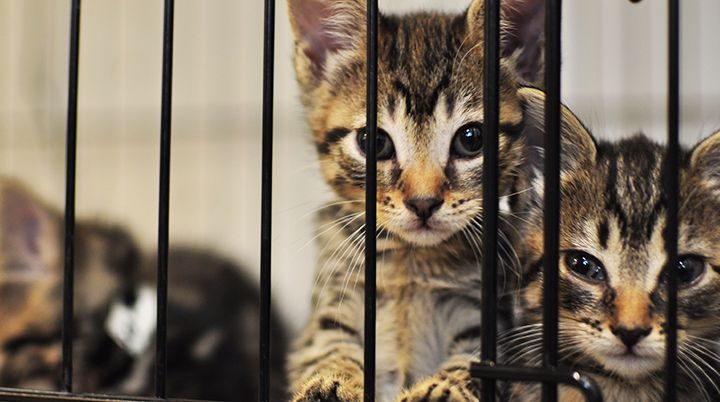 PETA, an organisation who has previously been portrayed negatively in the media for euthanising animals in shelters, believe that all animals should receive a dignified and peaceful end. “Our companion animals depend on us to be brave and selfless enough to make the heart-breaking – but humane – decision to end their suffering when the time comes,” Elisa said.

While sipping on an overpriced – yet admittedly delicious – vegan coffee, Caitlin also tells me about her childhood memories of having to put a pet down, except this time, the dog in question was suffering from cancer. “We looked into doing surgeries, but it seemed cruel as he was older and there was no guarantee. He was so full of life before whereas when he was ill, he wouldn’t eat, he wouldn’t move much. It’s about his quality of life.

“If you’ve had a pet for a while, you can see the decline in their happiness. He was either going to suffer and have a long slow death, so for his sake, it was the best idea.”

Portia agrees with everything Caitlin said, that the quality of life for an animal is the main priority: “If the animal is going to have trauma and severe pain, I think maybe it is ethical to put the pet down. If there is a chance that they can survive – I’ve seen dogs with three legs who live happy lives.”

According to the Vet Times, over 560,000 puppies are born in the UK every year, whereas thousands of cats and dogs are euthanised in animal shelters due to not being rehoused.

And with the prices of breeders in the UK costing up to £5,495 for a Labrador, it doesn’t make sense for anyone to want to buy from a breeder instead of rescuing a dog from a shelter.

PETA’s website educates its readers on what we don’t see when purchasing a pedigree dog or a beautiful cat – or any other animal – from a breeder. Believe the breeding industry to treat animals as purely a way to make money, PETA informs its readers about how female animals are forced impregnated to give birth to litters until their bodies are worn out.

“Breeding animals for profit is an inherently cruel and irresponsible practice, as thousands of lovable and highly adoptable dogs are euthanised in the UK every year for lack of good homes. People who are willing to commit to taking proper care of a dog – or any other animal – should avoid breeders and pet shops like the plague and save a life by adopting from their local shelter,” Elisa tells us.

Caitlin has a lot of disdain for the breeding industry: “It’s not about the animals, it’s purely about the money. But then who can blame them when people are still buying them? It’s so cruel but to these people, it’s just a business.

“Certain people just want pets for the look of it. The last dog I rescued was a French bulldog, and they’ve been bred to have squashed noses. She ended up having loads of surgeries and ended up dying early because of it. But there’s a market for it so it’s not going to go away.” 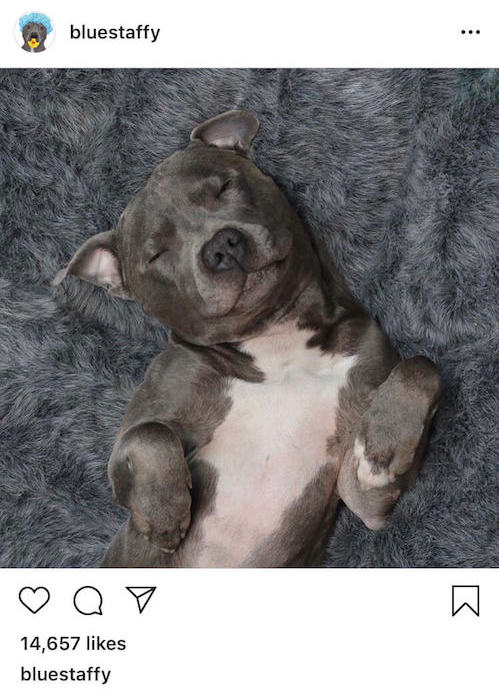 “Nobody wants them because of their reputation of having aggressive tendencies.” [Instagram:Bluestaffy]

But how do we, as consumers, rectify this situation? Is it as easy as not buying from breeders? Can we call ourselves dog lovers if we reject any pet that been bred as if their health problems from years of incestuous breeding and crammed living conditions isn’t enough?

“Dog-wise, there’s normally loads of Staffies in shelters, but they’re actually the most family-friendly dog,” Caitlin tells me, a look of sympathy on her face as we search the beautiful breed on Google Images. “It’s who they’re owned by that has given them their reputation. They’re nothing special to look at so I can see how they’re not good enough for the people who want a dog to put in their handbag.”

The Staffordshire Bull Terrier, a close relation to the Pit Bull Terrier, a dog that is listed on the UK’s Dangerous Dogs Act 1991, is a friendly, loving family-pet that has been highly misunderstood.

Portia also noticed that Staffies have the short end of the stick when it comes to adoption: “[My boyfriend and I] looked on every rescue website, and most of the dogs are Staffies. Nobody wants them because of their reputation of having aggressive tendencies.”

Despite setting out to decide whether vegans should keep animals in their houses, just talking about the neglected Staffies makes me want to adopt them all. Any pet in a shelter, really.

Luckily, Portia is in agreement with me: “I live near a cat rescue centre and I can hear them when I walk past. There’s no way that I could go in there or I’d just come out with all of them in a box.”