The view from Millennium Bridge of a clear sunset is a sight a photograph will never justify. As pink seamlessly melts into purple and dark blue, the stars of the London skyline start to shine in every direction.

Metres high above the Thames, sat side-saddle on his bike, soaking in the strangely warm Valentine’s night, is Joshua Quigley. 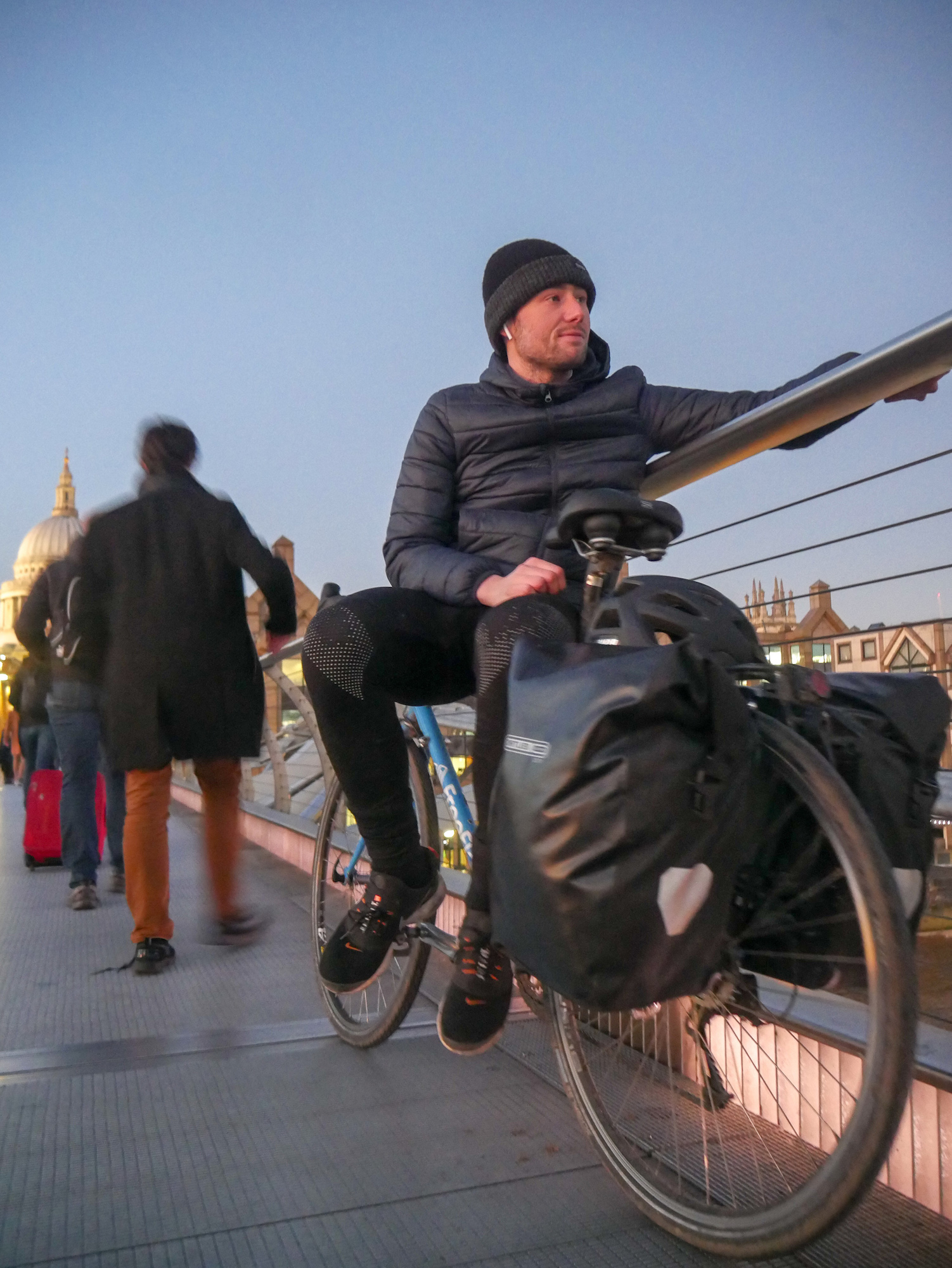 Joshua takes in the views from Millennium bridge [Elliott Nielson]

He’s just completed an eleven-day journey, cycling from his mother’s home in Livingston, Scotland, to this very spot, at which I had the pleasure of meeting him. Bear in mind however, this is only the first stage of a cycle that will take him across every time zone on earth. This was just the 575-mile warm-up, fuelled by bananas and peanut butter, but was still, “more of a challenge than expected”.

With his wheels buckling up in Kendal, Cumbria, and a lack of bike fitness, there were plenty of times Josh was ready to pack it in and quit the whole thing.

The most unexpected part of the journey down to London happened in Bedford. Quigley racked up a £75 fine for pedalling down a pedestrianised zone. Explaining to a Radio 5 Live team member over the phone he says the fine is “just ridiculous”. He claims there was no warning, no empathy from the council officer and even supports restricted cycling in town centres. Ridiculously still, his substantial social media following meant his refusal to pay the fine went viral. The story prompted a live phone-in on Radio 5 Live on February 15.

Bedford Borough Council have since told the Bedford Independent: “We have this restriction in place to help keep pedestrians safe whilst visiting Bedford and this is reducing the number of offenders. Anybody who does not agree that a fine should have been issued can decide to have the case heard in court.” Rounding up the Radio 5 Live call with a hint of sincerity he tells them he’s “still not paying it”.

Despite these ups and downs, this is still his greatest decision he’s ever made in his life. “I’m living the dream,” he says staring out from the Thames’ southern bank. Seeing the world and having positive human interactions along the way are all he’s searching for.

Growing up in a small town outside of Edinburgh, Quigley was always very driven and determined to be “seen as successful”. Reading a copy of Richard Branson’s biography at the age of ten drove him to start a successful social media consultancy ten years later and eventually earned him an award as a Young Entrepreneur in 2015.

A few weeks later, he tried to kill himself.

Following a break-up with his teenage romance of seven years, he tested his mortality by driving into a wall at 70mph, writing off the car in the process. Within three hours of being in hospital, he was discharged without a single scratch, “I put it up to the man upstairs,” he said.

“Well, how d’you explain that, cause I cannae?”

After the accident, he continued to drink regularly as usual. A ‘first to arrive, last to leave’ kind of drinker, there suddenly came a moment when he figured there’s got to be more to life than Edinburgh’s pub circuit. “When you stop drinking you get so much time back. Normal life just doesn’t cut it.” So, he travelled the world by bike.

He travelled 10,000 miles discovering the fact that he didn’t want to cycle the world, he just wanted to be happy. But very quickly he struggled to fit back into society and readjust to life back home.

Asking me if I’d ever seen Trainspotting, he says his latest motto is to “choose life”. Far from the sarcastic ideas of Irvine Welsh’s main character, his definition of a successful life is: “Do what you want as long it has a net positive impact. It’s only us and the planet and unless you’re having a positive impact on those two what’s the point in life?”

Comparing the adults glued to smartphones to the school kids playing outside the Tate Modern, it frustrates Quigley to think of how disconnected society has become. This journey for him is about getting “back to the basics”. Everything he owns is on the bike: One pair of trainers, three pairs of socks, a couple tracksuit bottoms, one jacket, a tent, a laptop, his phone and plenty of bananas. “The thing with possessions is that eventually, they possess you.”

Those he does own, the laptop and smartphone means Joshua can vlog the entire experience as a testament of inspiration for all those stuck with poor mental health. This is part of the reason he’s sponsored for most of the trip by the Care Improvement Associates (CIA Group). The medical care consultancy firm tweeted that they were “thrilled to be sponsoring Joshua on the first leg of his adventure ‘Cycling Around the World: Second Chances’.”

For anyone wondering, there’s no epic playlist that will be taking him on his next leg to Istanbul. “On the bike, it’s just headspace.”

He finds little purpose in worrying, he gets to travel the world meeting its people as he goes. Although not knowing what he could even worry about, his greatest weakness is all the beautiful women he’s bound to meet along the way. As a fan of Love Actually, he’s a firm believer that “nothing beats romance.”

Joshua Quigley carries with him an infectious air of positivity and optimism. His story is reassuring in the sense that you don’t have to be the big business magnate to be successful. “The people you love, you love them ‘cause they mean something to you, it’s not gonnae matter what they were wearing that day or how much money they’ve got.” 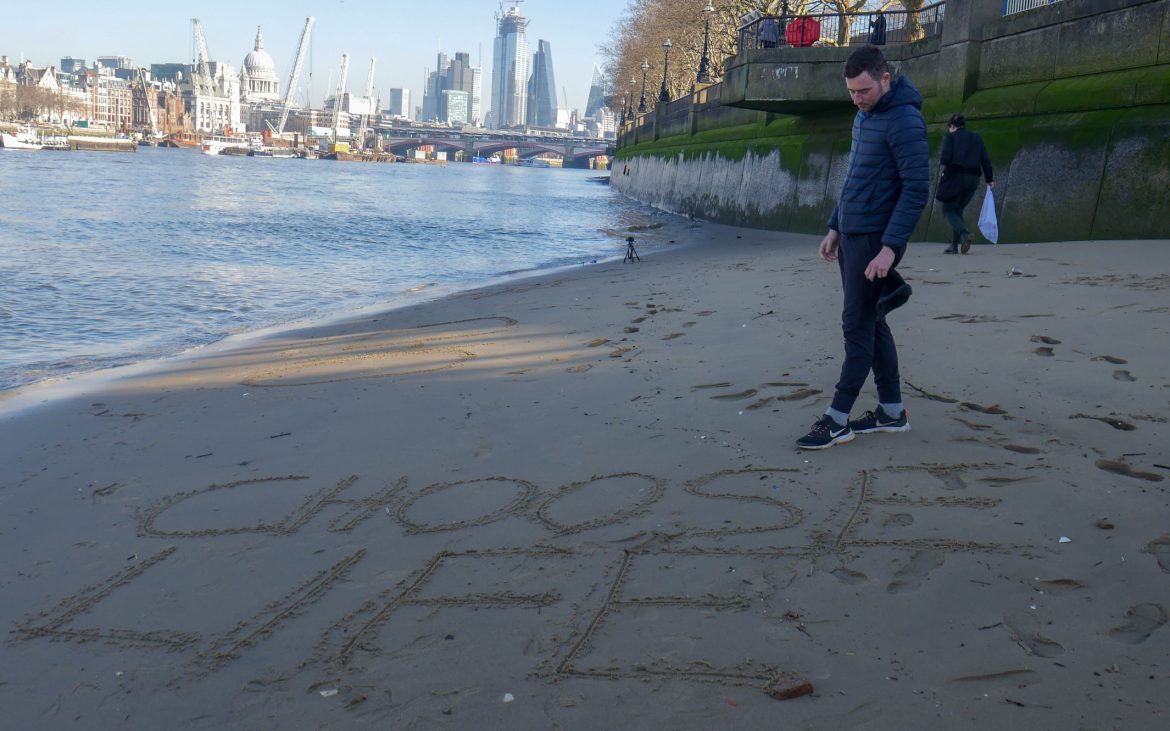