Muslim Sisterhood: Breaking down the stereotype

By Lucy Arup and Isaine Blatry

A group of girls stand at the back of a corner shop, posing in front of a refrigerator filled with drinks and a shopping aisle stocked with nuts and spices. One of the girls leans on a shelf stacked with tins. She is wearing a Fendi jacket and a matching headscarf.

The girl in front is crouched on the floor is donned in a checked Burberry trench, her face hidden with dark sunglasses. The third girl is relaxed in her stance, head cocked slightly to the side, gold hoops hanging from her ears.

Her outfit colour scheme is green; green fluorescent jeans with colourful bottle motifs, a green furry coat with patches of pink, her hair wrapped in a lime green headscarf.

This image is a photograph created by the Muslim Sisterhood, a London based collective made up of Lamisa Khan, Zeinab Salah and Sara Gulamali, whose Instagram account, of the same name, hopes to change the way young Muslim women are represented in art, fashion and media, also, most importantly, to create a collection of images of young Muslim women for young Muslim women. 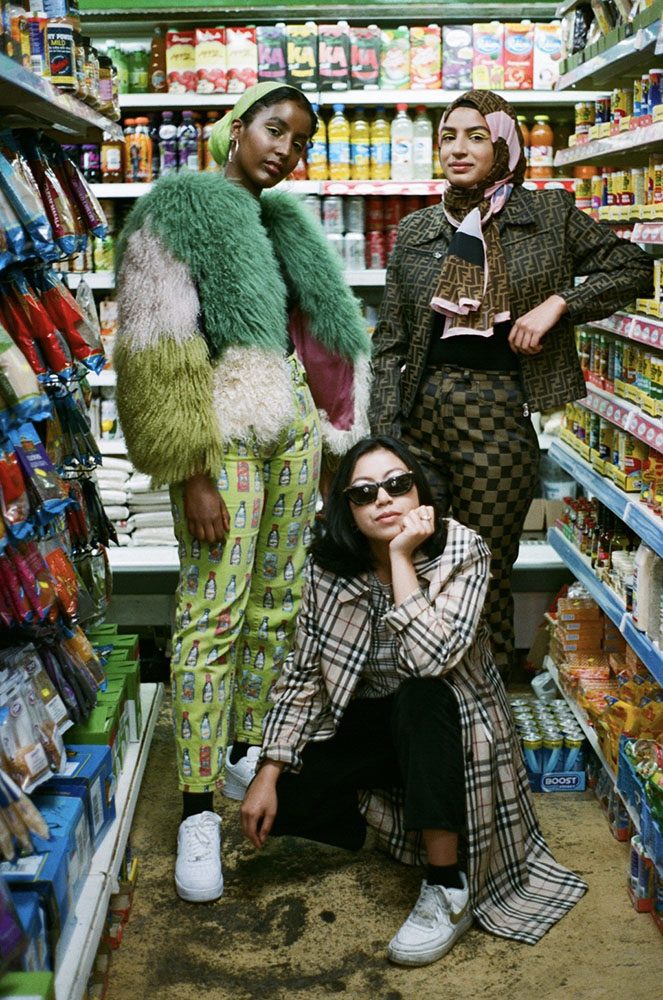 If you know London, then you will know of it’s artistic, vibrant, multicultural citizens. The vision of three young Muslim women of various ethnicities dressed in a mix of streetwear, vintage and designer clothes, posing at the back of a corner shop would be nothing new.

Yet images like this, of young Muslim women in streetwear, dripping with cool, youthful, nonchalant energy, are so hard to come by. Rarely do audiences get to see Muslim women represented in a way that does not feature overly used female Muslim stereotypes.

“I always say that I did this project for a younger version of myself. The version of myself that didn’t have anyone to look up to, who didn’t think it was cool to be Muslim, it was really just a desire within me innately to make images of women who live like me, who look like me and are like me,” says Lamisa.

“It’s really important for young women growing up in the social media generation to see a positive representation of themselves. So they can know and grow up and be confident in their heritage, in their religion, in their identities; so they don’t have to compromise their values and fit into a western standard of living. Saying that, we can’t deny how much impact growing up in the UK, or growing up in the west has had on our identities, obviously, that informs how we live our lives as well, but just showing that you can balance both of them and come out to be a fulfilled person.”

Muslim Sisterhood came to fruition over social media, Lamisa had been following Zeinab and Sara on Instagram, “Sara and Zeinab at the same time did a collaboration with Variant Space and their images took over phone booths and bus stops in New York. They were in Adidas tracksuits and they just looked incredible and so unapologetically Muslim, but cool” says Lamisa.

“So I instantly messaged Zeinab and said ‘hey I’ve got this idea, it would be really good to talk about it’ and she said ‘let me get Zara on board,’ and we met in September or October in 2017, that’s how long it’s been, and we just sat down and said, ‘lets do this.’ It kind of went from there.”

‘We used to shoot a lot of our images in Muslim owned businesses in inner-city London and give an insight into that.’ [Muslim Sisterhood]

“I think we are really interested in showing Muslim women in streetwear, that’s what we usually wear. I know me and Lamisa are always wearing hoodies and things like that” says Zeinab.

“I saw this music video with Section Boyz and they are all wearing the red Trapstar hoodies and I just thought they were so iconic, they were on a London bus and I thought ‘that is what London is’. Multiculturalism and streetwear. We wanted the models to wear things that they would usually wear themselves and if they weren’t into streetwear we told them to just come as they would be dressed on a usual Saturday morning.”

Two months after founding Muslim Sisterhood, in December 2017, after completing their very first photo shoot in London’s Brick Lane, Lamisa, Zeinab and Sara created the Muslim Sisterhood Instagram account, within a week they had over 1000 followers.

‘Being able to style and create an outfit that’s cool, using high street brands, using clothing that everyone knows and being able to curate it to also be Islamically acceptable, is really important to us.’ [Muslim Sisterhood]

A 2017 report conducted by the Social Mobility Commission stated that “young Muslims feel a real challenge in maintaining their identity while seeking to succeed in Britain. They felt worried about being different and unsure about whether getting on was compatible with their identity as Muslims.

The disconnect felt from young Muslim people towards existing in everyday British life, is an issue that Muslim Sisterhood hope to tackle with this project. “I grew up in a very white working class area,” says Lamisa

“All my friends were white. I was too white for the Muslim kids and too Muslim to quite fit in with the white kids and I think it was only when I got to university and once I was more confident in myself, I felt more confident in my Muslim identity as well. I think it’s the lack of representation we saw ourselves growing up, that acted as a catalyst for our project.”

“I can’t lie, growing up I really struggled with my Muslim identity. I think it’s because I didn’t see Muslim women the way I wanted to be represented,” she tells us. “We had the rise of the Dina Tokio’s and the hijabi bloggers, which was great, it was so empowering to see Muslim women do well, but then again I didn’t relate to them, I didn’t dress like them. Sometimes I felt like my values didn’t match or my personality wasn’t shown in that way. But these are the women who were the gatekeepers of Muslim representation at the moment.”

Muslim Sisterhood understands the weight of responsibility that comes along with representing Muslim women through the fresh lens they have curated, however, their pure love of art and fashion is also an important driving force behind this project.

“Politically we know it’s really important in terms of the climate right now,” says Sara. “But at the same time we love fashion, we love music videos, Zeinab and I study fine art and Lamisa herself is so creative. So I think that has been really exciting and I think lately we’ve been really blessed to work with so many people who have helped us come into our own, and learning just how to style, looking at magazines and getting really excited that we want to do creative shoots that are a bit avant-garde and a bit different.”

‘I already wanted to create these images for myself, but more and more I’m realising how important it is for the younger generation.’ [Muslim Sisterhood]

The city of London plays an integral part in the photographs, Sara, Zeinab and Lamisa create; not only does the city act as a iconic and energetic set where Muslim Sisterhood can place and direct their models, but featuring London so prominently in their images is also about reclaiming a lived reality that has been appropriated by the mainstream.

“We’ve seen a lot of music videos and brands kind of fetishise this working-class aesthetic when actually people live in those council houses, it’s not just a pretty building,” says Lamisa.

“It’s reclaiming that narrative and celebrating it ourselves rather than for it to be fetishised by someone who hasn’t had that lived in experience…We specifically shot in places that were falling victim to gentrification, that had a high majority of ethnic people. Places like Brick Lane, places like Peckham, places like Brixton. It’s sad to see businesses and companies getting shut down because of gentrification, but at the same time, they are being fetishised by popular culture and music videos. It was really important for us to say ‘this is who we are and this is how we grew up,’ and make it beautiful I guess.”