Sugar, sugar and more sugar. Sugar by the tills, sugar in the centre aisles, on the end of aisles, on sale, dedicated aisles, secretly hidden in the healthy aisles it’s in the supermarkets and it’s everywhere.

All this sugar had led us to some scary health statistics according to Carl Baker’s annual Obesity Report. With 26% of adults in England classed as obese and further 35% overweight according to the Organisation for Economic Co-operation and Development, it’s time we looked at what’s happening and ask, how did we get here?

Obesity hits our headlines all the time. We’re a fat nation and we know it. But how do you know if you’re obese? And how did you get there? According to research briefings by Parliament UK “Obesity is usually defined as having a body mass index (BMI) of 30 or above. A BMI between 25 and 30 is classified as ‘overweight’.”

You can work out if you are obese by using this simple formula: Divide your weight in kilogrammes by our height in metres; then divide the answer by your height again, then you have your BMI.

“There is sugar in every aisle” says Julie Gregory, grandmother of five, as we walk through the supermarket. Born and raised in Redcar on Teesside, Julie likes to cook for her grandchildren to give them the nutrition she is not sure they are receiving from school and at home.

“My daughters are very busy and when they come in from work they sometimes buy pre-made meals for their children as they are quick and easy.”

But hidden in the (seemingly) healthy ready meal is sugar used as a preservative for the chicken and in the tomato sauce on top. “I try to give them vegetables and unless they are honey roasted they won’t eat them. It’s as if they’re addicted to the sugar by the age of eight!”

Julie’s main concern is that children are not being educated on the foods that are good for them. Basic nutritional information that she believed should have been passed on through their school was not.

“Sugar seems to be the main issue for most children in the country, as its hidden in everything” comments children’s food guru, Annabel Karmel in a recent debate on Mumsnet.

The chef prides herself on only including naturally occurring sugars in her recipes and has been known to campaign for the reduction of sugar available to children amongst other chefs including the nations hero Jamie Oliver. 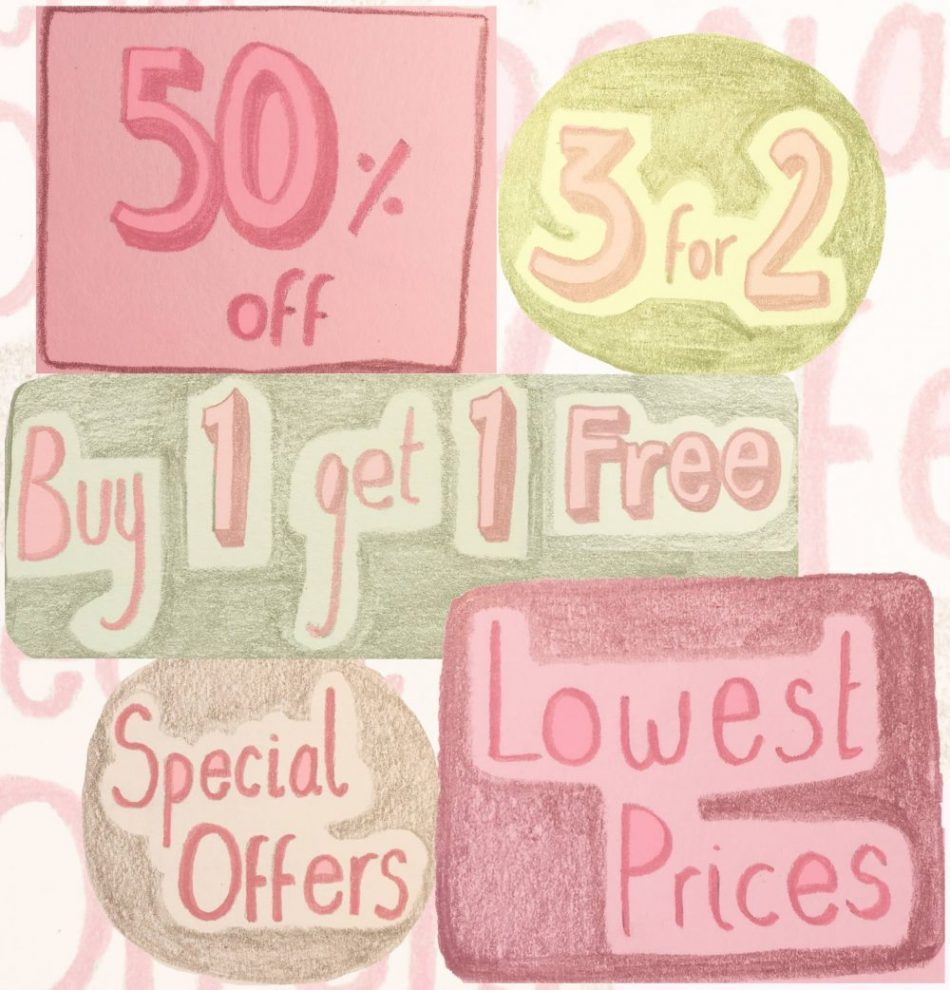 ‘For Sale Signs’ draw us to sugary sweets [Laura Page]

In a TED Talk in 2016, Oliver made physical statements by pouring out wheelbarrows full of sugar that are being given to children by schools through chocolate milk. It was not until late 2018, the House of Commons was forced to comment that change is really being made.

Politicians gathered to discuss what they can do to ease our obesity crisis. Their attempts include banning deals on food high in sugar, fat and salt near supermarket checkouts. After years of being criticised in the press by health experts for failing to cut child obesity, they will also include a ban on the sale of energy drinks children.

Tim Rycroft, a spokesperson for the Food and Drink Federation commented that “the advertising and promotions underpin the healthy, vibrant and innovative market for food and drink that UK shoppers love.”

It’s there we know it. But the question is: What is it costing us?

As a leading contributor to obesity alongside saturated fat and lack of exercise, Obesity is costing the UK taxpayer a lot of money. So whether you feel that you are suffering and could help or whether you feel this doesn’t affect you at all – it does.

According to Carl Baker’s Obesity report: “Estimates of the economic cost of obesity vary and are inherently uncertain. An influential Foresights report from 2007 estimated that NHS costs attributed to elevated BMI were £4.2 billion in 2007. This was forecast to rise to £6.3 billion in 2015 and £8.3 billion in 2025. This only reflects costs to the health service and not wider economic consequences for society.

Healthpad wrote an article explaining the financial impact further: In England in 2016, pharmacies dispensed 450,000 items for treating obesity with a net ingredient cost of £9.9 million. Almost all of these prescriptions were for Orlistat, which prevents the body from absorbing fat from food.

Along with Bariatric surgery treating those with a BMI of 40 and in some cases where BMI is between 35 and 40 if the patient has health problems such as diabetes – another disease that is caused by the over-consumption of sugar. Diabetes has its own GP time and prescription costs to consider. 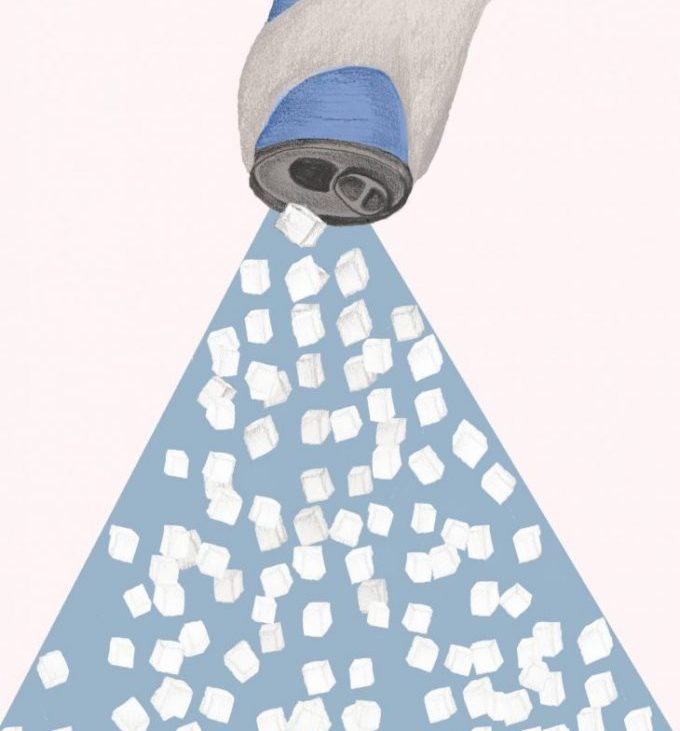 Sugar in fizzy drinks, a common cause of obesity [Laura Page]

There are non-economic factors to consider too and often one negative effect leads to another. These may include but would not be limited to:

Social: The activities that you may not be able to participate in or the health problems that do not allow you the energy to go out to socialise with friends and family.

Mental: The impact that obesity can have could have is often closely linked with mental challenges such as depression and anxiety.

Physical: Day-to-day life can seem harder as small tasks become physically challenging such as walking around the block leaving you fatigued. This could further affect the energy you have to spare for work, commuting, family and yourself.

Emotional: Self-esteem issues and bullying alongside discrimination can all be impacts of becoming obese. There is also a vicious circle of emotional eating to consider. Some who are overweight might seek emotional comfort in food.

Taking all of these primary and secondary impacts into account we can see how much obesity affects us and those around us. The social, mental, physical and emotional challenges that often come with obesity may not arise so commonly with more fit and healthy population. So, with the help of new legislation, more action to teach children and further awareness of the dangers of obesity we can begin moving forward to create happier and healthier versions of ourselves.

Time to make a change

Everyone reading this can make small changes such as: buying organic and non-processed foods from supermarkets, make sure they are looking at the sugar count on processed foods using the traffic light colour system, or sign government petitions to ensure the sugar in supermarket products is limited and encouraged to be sourced naturally.

This is all to be incorporated with a healthy lifestyle of getting enough sleep, exercising and taking time out to read and educate yourself on nutrition. The Obesity Health Alliance has pledged to research and to the campaign:

More specific points can be found on their website. Their plan incorporates proposals that will have immediate effects on what people are able to purchase, a moderate impact on the promotions and product placement of sugary foods and drinks in stores and followed by long term impact initiatives teaching children about the dangers of sugar and how to make meals that are healthier.

Let’s be the change!