It was a freezing mid-winter evening as Polly Gilbert made her way home to Vauxhall after a party. Searching for some post-night-out sustenance, she headed to the hot dog vendor by the station, but she was quickly distracted by a homeless man outside in the doorway of a shop.

“He was shaking and shivering from the cold,” she remembers, “it was an absolutely horrible winter night.”

At that moment Polly experienced an emotion that most London residents can relate to, “I had that feeling which I think everyone has, I want to do something, I couldn’t just walk past him to my warm house and not help,” she said.

Feeling helpless, she bought him a hot dog on her card from the stand, as she had no cash to give him. He went on to tell her she was the fifth person to offer him one so that she was better off giving it to one of his friends nearby.

That Monday Polly spoke with her colleague Katie Whitlock at the advertising agency in which they worked. “We realised that people in London are so generous and willing to give to help people because poverty is becoming increasingly visible, but often we are not giving in ways that are effective,” Polly said.

Together the pair co-founded TAP London, an initiative where contactless donation points have been set up around the capital.

As using our cards more than cash becomes increasingly a part of modern life, could TAP be the future of accommodating this innate human desire to help someone in need?

The TAP organisation allows Londoners to use their contactless cards to donate £3 to a collection of twenty-two charities that aid the homeless. These include local charities, as well as large national organisations such as Centre Point, Shelter and the Salvation Army, all payments made via the donation points, will be used for targeting London specific causes. 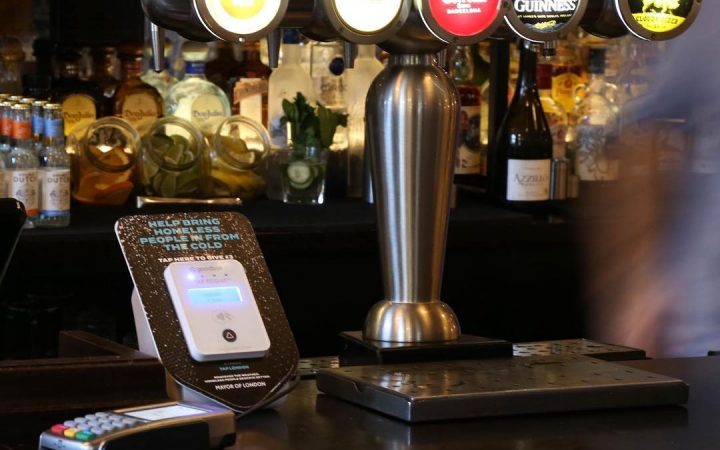 A TAP donation point at a London pub [TAP London]

Christina Ball, who works for the Hackney Winter Night Shelter, has seen first-hand how our decreasing use of cash is impacting the homeless. “It is incredibly hard for people to survive living on the streets, the average life expectancy of a rough sleeper is just 47,” Christina explains. “People would often give cash to those they see sleeping on the streets, but it is starting to have a real impact as people have less actual money to give.”

A 2018 study by Homeless Link found that London has seen a 13% increase of rough sleepers, as well as hosting 27% of the country’s homeless population. Polly believes that rising rent prices in the capital is a major factor in the increasing numbers of homeless people. “It’s no longer a situational thing, people just can not hold down these expensive tenancies,” she said. Christina agrees that rent prices in London are a serious issue, “high rents and the lack of social housing are exacerbating the homelessness situation.”

Many people still perpetuate the stereotype that those who are homeless are victims of their own decisions, assuming they suffer from addiction issues or are homeless because of events like a relationship breakdown.

“Last year was the first time where the main reason for homelessness changed from family break-down to tenancy breakdown, which is quite a telling thing,” Polly explains.

Working with the homeless community and the causes that TAP support has even challenged Polly’s own perceptions of what causes someone to lose their home.

“This project has been a huge learning curve, it removed all the theory about how to change homelessness and how to help the situation, especially when you are just one-on-one talking with someone in that position.”

With TAP’s growth, they are keen to help all kinds of homeless people, “I think the fact that initiatives like this and new charities are needed so much, shows that the government is not doing enough to help vulnerable people,” says Polly.

While rough sleepers may be the immediate image that comes to mind when we discuss homelessness, there is an even larger number of ‘hidden homeless’ people in London. 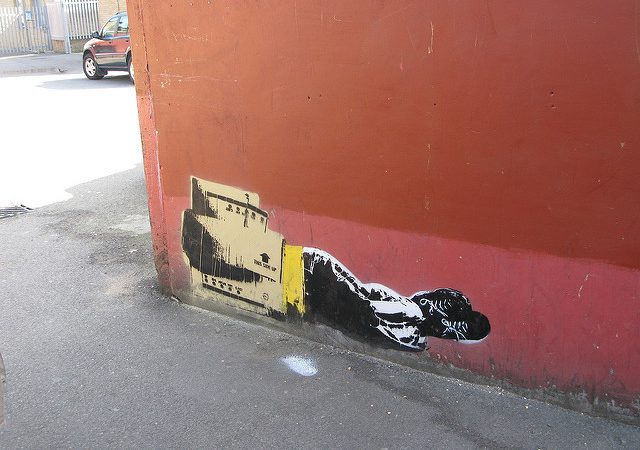 Rough sleepers are a stark reminder of the homeless problem in London [Flickr: Julian Tysoe]

The term ‘hidden’ refers to those who are living in precarious situations, like sofa surfing, emergency housing or squatting, rather than living on the streets long-term. According to 2017 statistics from the Mayor of London’s office, there is thirteen times the number of hidden homeless people than there are of those sleeping rough.

An example of this group is Sonya Robertson, a single mum from Waltham Forrest. In 2015, after being evicted from her property due to rising rent prices, she was left with nowhere for her and her three sons to live, and had no housing until last year. A former school administrator, she had left her job to start her own healing and meditation business, and was an active member of the community.

She had felt her living circumstances were secure: “I would have never thought that I would have been in the situation I have,” she said. “You have to stay strong, but I had my moments where I thought I was going to lose my children or have to go and give them up.”

Sonya was advised to stay in the property until the end of the notice period by the council after she had contacted them with her concerns about leaving her home and the rising rent prices in the area. When the notice period was up, she and her three sons left fifteen years’ worth of possessions behind.

Taking just the essentials, they made their way to the housing office, “It was mayhem, every day so many families are getting evicted. You can easily have ten or more there waiting to be placed in emergency accommodation, with everything they own.”

After hours of waiting they were sent to emergency accommodation late that night, when there was no answer at the door or from the housing office, the reality of Sonya’s situation sunk in for her. “We were at that point street homeless. If I had not had my parents’ house to go to we would have been sleeping rough,” she said.

After following the housing office’s advice to remain at her property until the final eviction date, a few weeks later the council made the assessment she was ‘intentionally homeless’. “They had no duty care for us at all after that, we then sofa surfed for two years, and most of the time we would be separated from each other,” she remembers.

Sonya’s situation eventually started to turn around when Shelter, one of the causes supported by TAP, stepped in and took over her negotiations with the council. After two years of sleeping “anywhere where someone had a sofa,” as she describes it, and her son having serious health issues, the council finally re-opened her case.

“Shelter took over for me and negotiated with the housing department, they handed me to a solicitor when they hit a brick wall with the council,” Sonya explained. If it was not for the solicitor that Shelter recommended her, she may still have been in the same position. With the additional funding from the TAP initiative, hopefully, charities like Shelter will be able to step in and help more people in Sonya’s position.

Last year, TAP’s application for funding from Sadiq Khan’s Rough Sleeping Innovation Fund was accepted, meaning that their growth has also been a credit to the Greater London Authority.

Launching in line with the Mayor of London’s Winter Campaign, the contactless donation points sparked the interest of many influential Londoners, and the initial soft launch of thirty units soon became ninety. 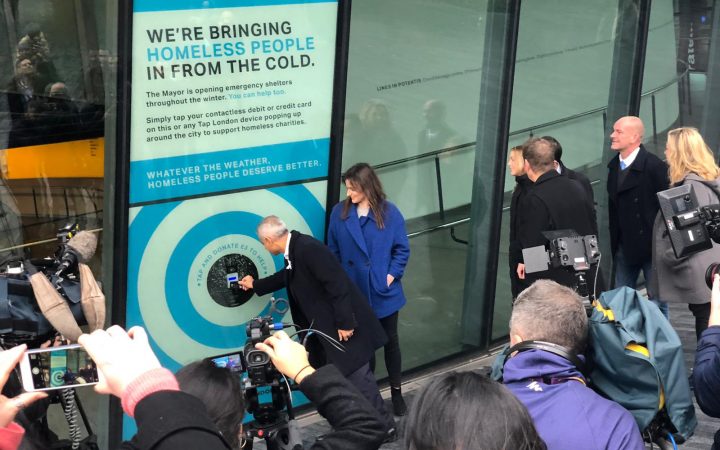 Polly’s passion for the project is evident, “We’ve had £50,000 raised so far which is incredible, the first transaction of funds is going over this month to the group of charities, and so hopefully soon we will get to see some case studies on the impact it has had for the projects.”

While the funding from the GLA has been instrumental in TAP’s growth, the organisation believes that schemes like these are very telling of the results of austerity policies, “a lot of the measures put in where incredibly tough,” says Polly.

“We get some people who push back on the initiative and say this is something that the government should be doing, but they’re not, and if they are failing to do that then as a member of the public do you just stand and watch?”

The TAP London initiative is a truly modern solution to aid Londoners in helping the ever-increasing numbers of homeless people, but until the government realigns its own housing policies with it, this is a problem that won’t be going away.