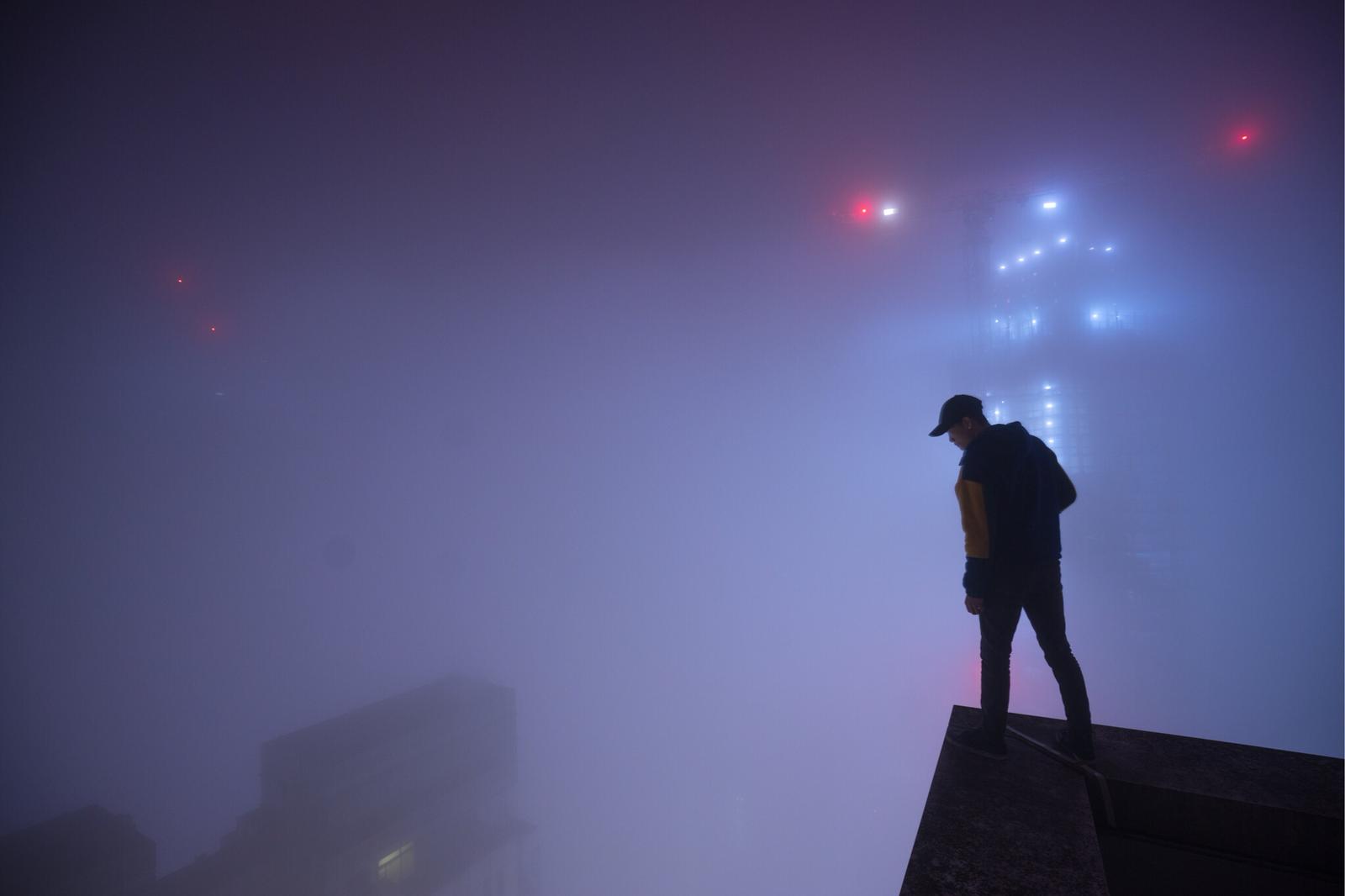 In London, it’s that time of the night. Even in a city that never sleeps there is a loophole time when young explorers can camouflage themselves within the shadows to avoid being spotted by passers-by. It’s bitterly cold and wet, but harsh weather is not a reason to pass up the chance to explore the rooftop of a block at the Barbican Centre. It hasn’t been explored before, untouched and waiting for an adventure to happen, it’s an opportunity which rarely comes around.

The outlawed explorers usually wear colourful Nike shoes with a good grip, to climb the rusty ladders, black balaclavas which are nearly as good a mask and black Nike hoodies that cover pretty much everything above shoulders except the eyes, blend in with the darkness but still look stylish for that perfect shot. 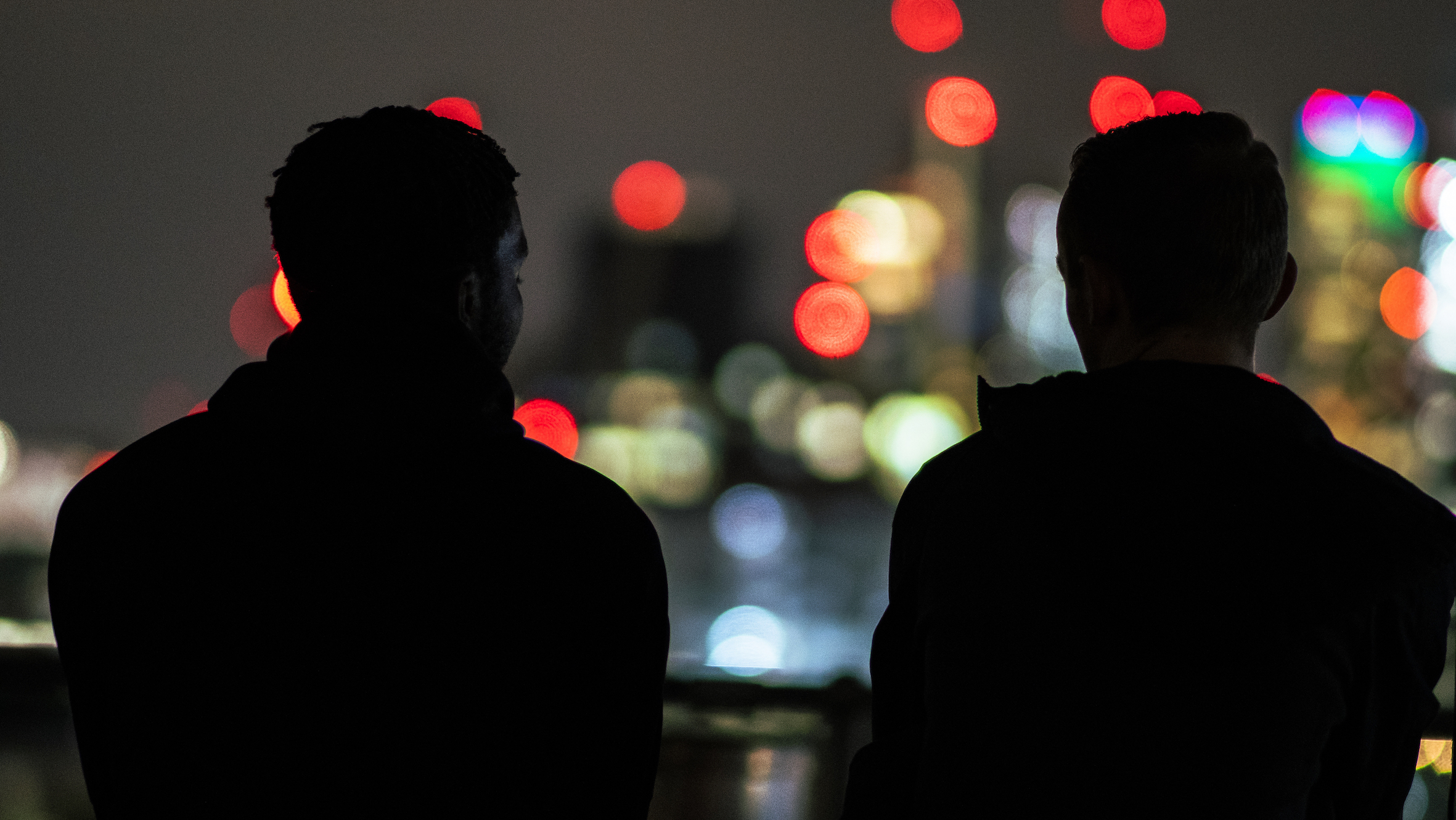 Urban exploring – urbex for short – is the exploration of abandoned man-made structures, locations to which the general public would not have access. Climbing rooftops of famous buildings or even something as common as tower blocks is also a part of the game, and photographing and documenting these places plays a crucial role. As an urban explorer myself, believe me when I say that urbexing is a lot more than simply just a hobby. It is an escape, a way of life for those involved.

People have long been attracted and drawn to the mystery behind abandoned places and locations which are not easy to access. The origins of urban exploring date back to the 1970s with a group known as the Suicide Club in San Francisco, who are commonly accepted as the progenitors of modern urban exploration. Over recent years urbex has crept its way up to be one of London’s most desired and appealing mainstream pop culture. 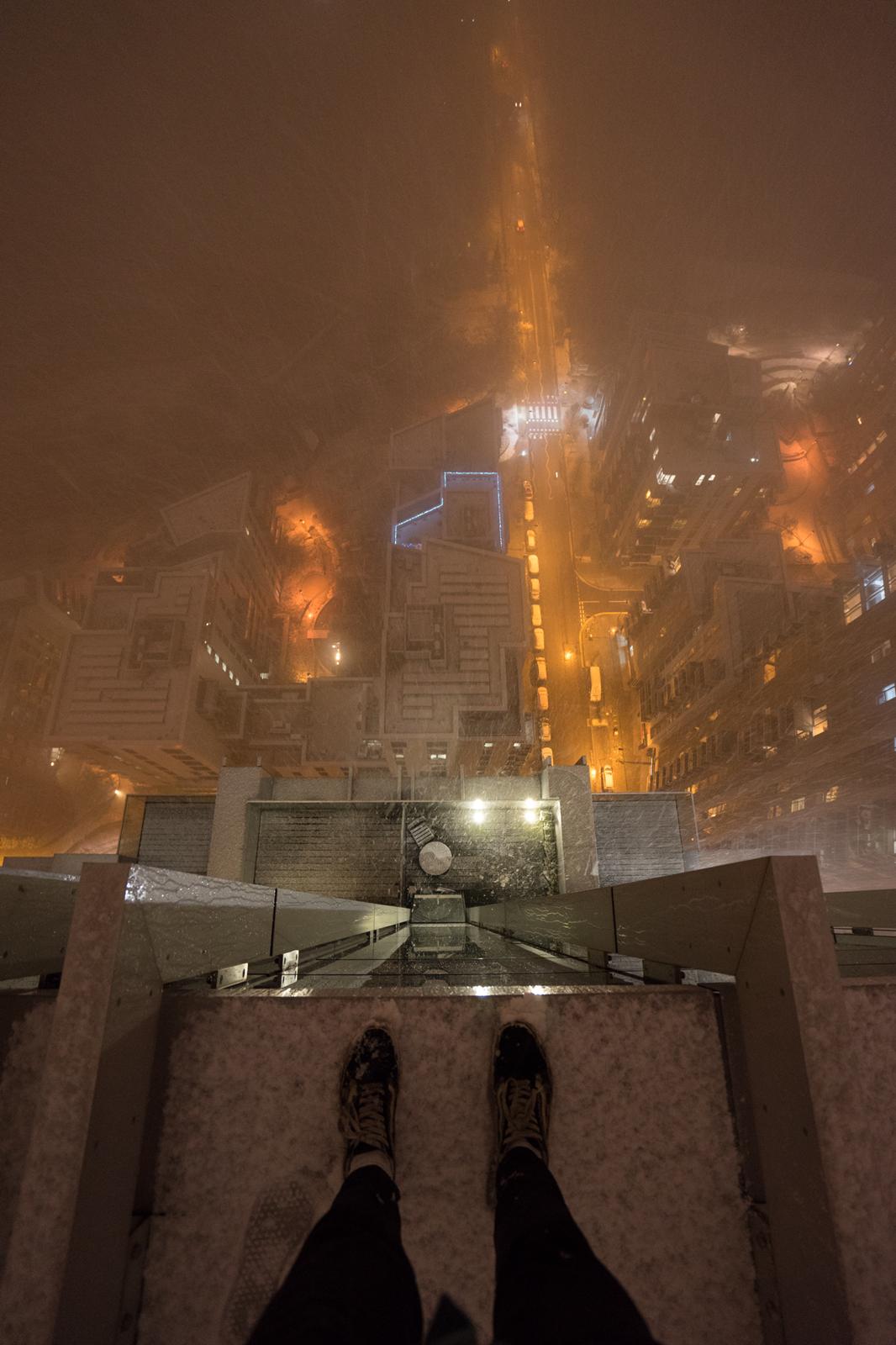 On the edge of a high-rise building [Newnotes]

Regardless of how bad the weather conditions make the view of the skyline look finding beauty in the city during the darkest hour of the night is an undeniable part of an urban explorers’ routine. Photography in a way beautifies what we would normally consider ugly if we saw it with our naked eye, and therefore photography simply frames the subject to beautification, and as Susan Sontag says, “nobody ever discovered ugliness through photographs.” Not many have the perks to experience and see the view of London’s skyline from that high up, thus it something to deeply value.

Urban exploration offers different things to different people. “I always liked photography but once I was introduced to urbex that’s when I truly started enjoying it,” says the 19-year-old who goes by his Instagram name, ‘Newnotes’.

Newnotes was introduced to urban exploration by a friend from school in October 2016. He has a full-time job and says urbex plays a huge role in his life, as a release from all the stress of work. As well, having access to views of London from a perspective which not many people see is something that he values, as well as the social aspect of king like-minded friends for Newnotes, and sharing with them the experiences and the views they get to see and photograph together.

Urban explorer who also lives a double life goes by his Instagram name ‘Kaizen’, he is a 19-year-old full-time student and a part-time photographer, he was introduced to urban exploring by a friend which then, later on, led him to go out in the midst of the night more regularly, he values the excitement of urbex. “The freedom that I get and the adrenaline that comes with it; like will we be caught or will we actually make it. I enjoy the uncertainty. And also looking down on people from above them reminds me just how small the world really, and how unimportant most of our worries are and this mindset helps me to relax.”

London and its burgeoning skyscrapers have been a prime playground for urban explorers. The giant blocks in the Canary Wharf financial district have certainly been a particular attraction and some explorers who were caught by police officers have even been banned from the area from 12 to 24 months and will be arrested if they go there.

Urban exploring is not a criminal offence but it is a civil one, under the law of trespass. So explorers in London can explore buildings without the fear of being handcuffed and locked up in a cell. Newnotes says, “Every officer you meet is different, some will want to lock you up some will want to see your shots and then take a selfie on the edge.”

Urbex carries real dangers, particularly for younger people who try to emulate more experienced participants but without a proper understanding of the risks, while filming every step of their journey for to post on Instagram and YouTube.

There have been many deaths of explorers over the years. In 2017 a 44-year-old Eric Paul Janssen fell to his death from a ledge on the 20th floor from a luxury hotel in Chicago, reportedly while taking photographs. 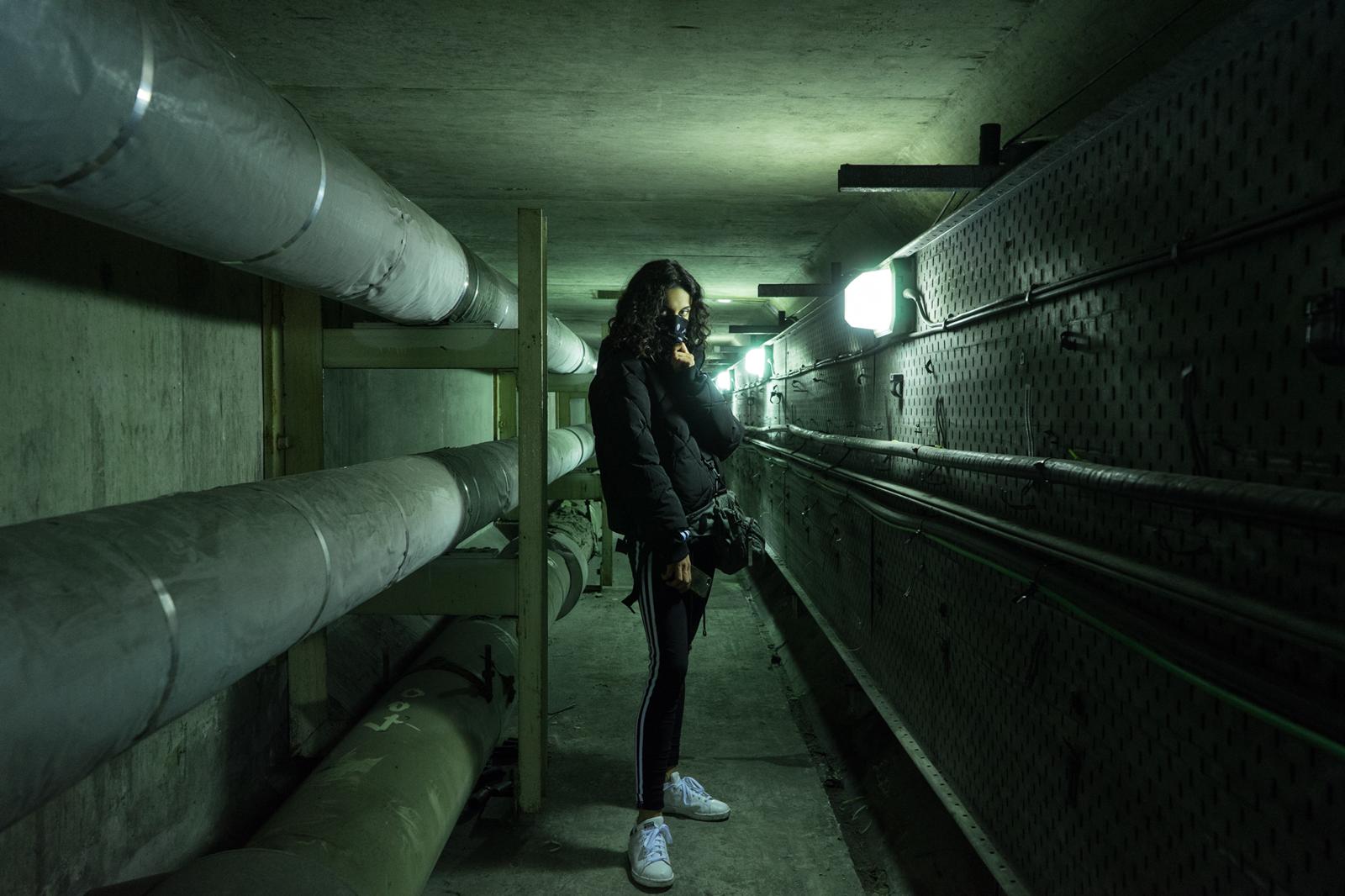 Making their way up to the top of a building [Newnotes]

Christopher Serrano, a 25-year-old New York based explorer who went by the Instagram name ‘Heavy Mind’, died as he attempted to climb onto the roof of an F-line train as it passed through Brooklyn. Jackson Coe, 25 who was known for doing backflips on top of skyscrapers was discovered dead at the back of the six-floor building in the West Village in Manhattan, New York.

One of the best-known urban explorers on YouTube is Ally Law who has trespassed into the Big Brother House and Thorpe Park, where he climbed a rollercoaster and has also been banned from TV studios and theme parks across most of the UK.

Many explorers have strong opinions on him, Mouse, who goes by his Instagram name ‘mousegreen.art’ believes the social media can encourage inexperienced explorers to take dangerous risks. “Ally Law and anyone who are doing these kinds of videos [Urbex YouTube videos] are fucking it for us. I don’t believe making viral videos with no regards for influencing other people is very sensible.” 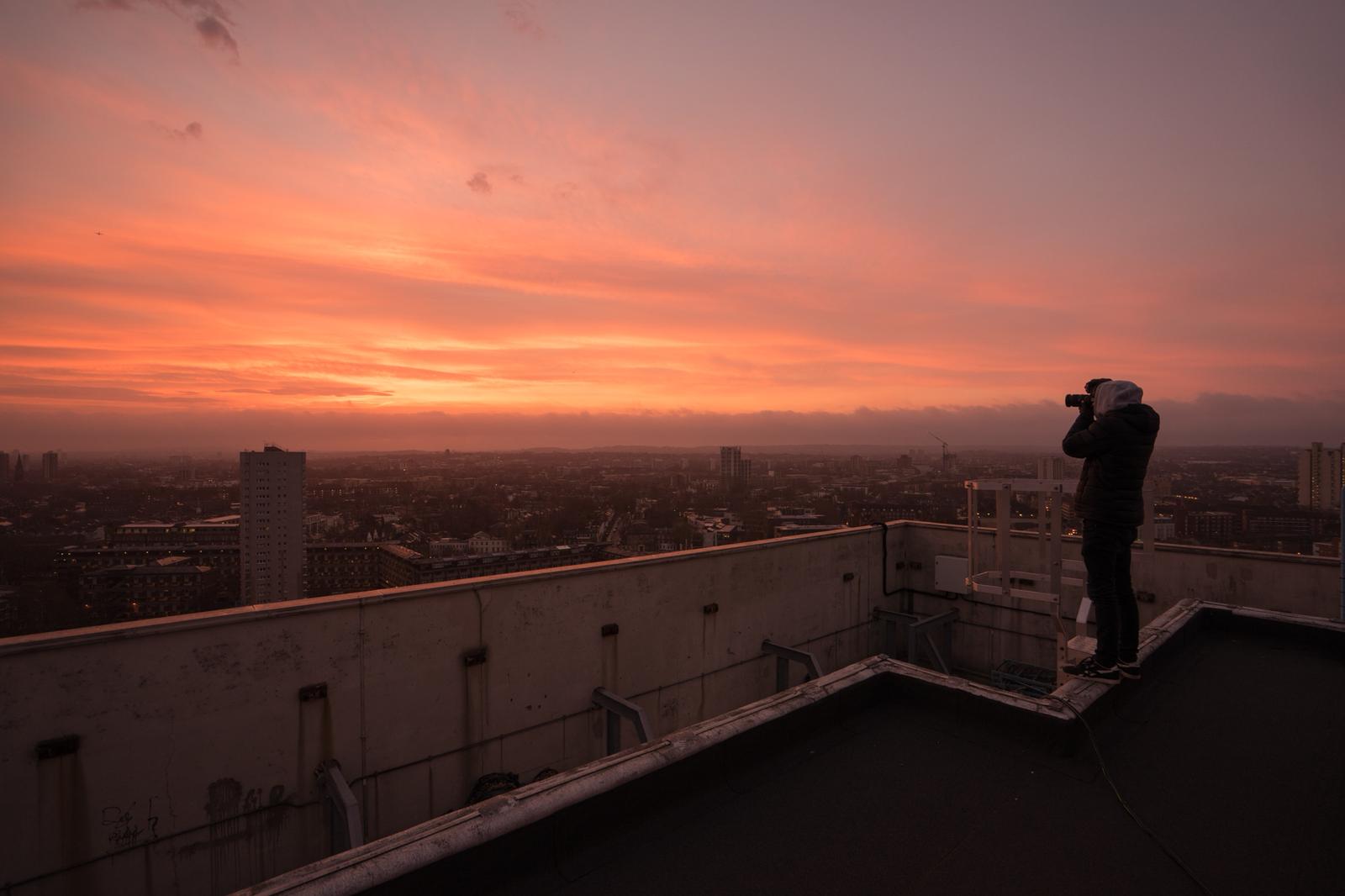 Sunset at the top [Newnotes]

As urbex has become more popular, the risk has grown of young and vulnerable people copying what they see on social media. Equally, some argue, the videos can be effectively a handbook on how to break into buildings for real criminals. Experienced explorers fear that this will lead to stricter laws and, perhaps, the criminalisation of their hobby. This has led them to a surprising and perhaps paradoxical understanding of the police and their position.

Newnotes says: “It is important to always respect the police not just because they’re doing their job but because they’re normal people as much as us. It’s hard to respect someone who wants to arrest you however if you can you’re likely to walk away without any problems. However, the influx of new explorers who do not have this attitude often makes the police’s life very hard making the police make more radical decisions.”