“There is no easy road to freedom anywhere, and many of us have to go through the valley of shadows of death, over and over again, before we reach the summit of our desires.” – Nelson Mandela

Imagine leaving your country and arriving at an unknown place with no one to count on, without your family or those you love. Iris Yaneth does not have to imagine this. She left Honduras one year ago and has been living in Barcelona since then. “The first days I was very sad, I remember crying a lot”, this 20-year-old woman, who arrived in Barcelona one year ago and left things and people behind, including her child, says.

Like most migrants, Iris had to start over, but as a migrant mother, the situation was even more complicated. It is a situation shared by thousands of women. “The majority of immigration from Latin America to Barcelona is female”, Gemma Pinyol, a high official at Instrategies, a think tank that specializes in international mobility, migrations and diversity management, says and continues, “migrant women suffer a double invisibility: that of being a woman and that of being a migrant”.

Migration is an engine of innovation and economic growth. Not only does it allow millions of people to find new opportunities every day, but it also creates bonds between societies. Nevertheless, it can also be a source of divisions within the families and leave some members under vulnerability to be exploited or mistreated.

For mothers, migration policies constitute an added difficulty, as they prevent migrant mothers from bringing their kids with them. In Barcelona, a migrant mother can be more than five years without seeing her child.

Getting a one-year long contract is increasingly hard. Desirée Garcia, the head of a program of professional training for the local chapter of Caritas, a Catholic relief and social service organization, says that in 2018, 28 per cent of the contracts were less than seven days long. Besides making it difficult to facilitate family reunification, these contracts promote informal, precarious jobs.

The City Hall of Barcelona offers social assistants to help migrants, but some migrants complain that the officials do not feel empathy towards migrant mothers. To compensate, Caritas offers economic support, formative courses, and emotional support.

Gimma Pinyol from Instrategies highlights a difference between migrant fathers and mothers. “The adaptation of mothers is often easier because their social network is extended by schools, parks, and social life required by children”.

However, that is, for mothers who come with their children. For those who don’t, the routine varies little. This is Iris Yaneth familiar with. She works as an assistant for the elderly to send money to her daughters back in Honduras.

“Well, I barely go out. I go from work to my room and from the room to work. Sometimes I go out to buy something at the market, but I don’t go out for walks”, Iris says.

Psychologically, having a child in another country can lead to depression. Furthermore, missing a child’s special moments, like a graduation or a first concert, can produce anxiety. When they see their country in the news, they feel angry. It is the feeling of not being there for those, who they really care to send money or helping them in another system, Desirée Garcia explains.

Míriam Moncada, a professor from Venezuela who migrated to Barcelona, says that the way through, which many migrants like her, express themselves, is by sharing their feelings through social networks, like Facebook. Míriam’s husband went as far as writing a book about the situation in Venezuela and what they had to deal with.

The emotional sequels of separating mothers and children can be felt for years in both mothers and children. Iris Yaneth explains that many people have asked her, what it is like to be in Barcelona. “You come blind; you don’t know how things are going to go”. The uncertainty of not knowing, what the future will be like is hard to grasp.

Diana Alcalde, a Honduran school counsellor and a migrant mother of three, states that it is humiliating. She has not registered with the Barcelona City Council, which means that she doesn’t have the right to vote nor use the public health service.

Maria López, who is a teacher from Honduras, says that the feeling of depression can start when migrant mothers arrive, because they miss their family, mainly their children. There are not only emotional costs but also social costs for not letting the families reunite. Losing a relative means not being able to go home because it would be nearly impossible to return to Barcelona.

Some migrant mothers move to Barcelona to survive. Míriam Moncada says she felt forced to move due to the everyday conditions in her country. “There was a medication shortage and my salary as a professor was not enough to live of.“

Maribel Barrueta, also from Venezuela, migrated to Holland to stay with her daughter, but she suffers from chronic bronchitis, she was uninsured and she had to leave to remain alive. Due to the medicine shortage in Venezuela and the unstable conditions of the country, she chose to move to Barcelona with her son.

In both cases, health issues pushed them into migrating. Upon arrival, they had to search for a place to live without knowing, whether they would be able to buy their medicine. For Barrueta, Barcelona was the most appropriate place to move due to access to healthcare.

The priority after the initial adaptation is searching for a fulltime job, rather than temporary jobs. The easiest way to work is by taking care of a family’s elder or children, as in most cases, employers do not sign contracts. Not securing a contract means that migrant women do not have an affiliation number to the Social Security system nor any job security, but instead long hours and often low wages. For these reasons, they sometimes have to work different jobs, like Míriam Barrueta, the former professor. She started working with an old woman who had Alzheimer’s, but now also tutors children and teenagers in physics.

Working under a low salary often means not having enough money to cope with rent or basic needs. As they cannot afford food, migrants have to find welcome associations who promote intercultural relations, such as the think tank Intergramenet, where they go around 4 a.m. to get the few tickets that they provide.

In addition, mothers, who live with their children in Barcelona, cannot pay for school extracurricular activities’, camps or field trips. This prevents them from creating a stable life project.

“Migrants express that they should be paid the same amount of money as the citizens, who were born here since they are equally trained,” Míriam Moncada states. Many of the migrants, who reach Barcelona, studied in their home- country and are highly qualified.

Some migrant mothers, such as Maribel Barrueta, say that they have never been mistreated or denigrated. However, many of the migrant mothers admit they have. Adding up the fact that they are women, some people see them as more vulnerable. For this reason, they say that it is easier to tease them or even abuse them. 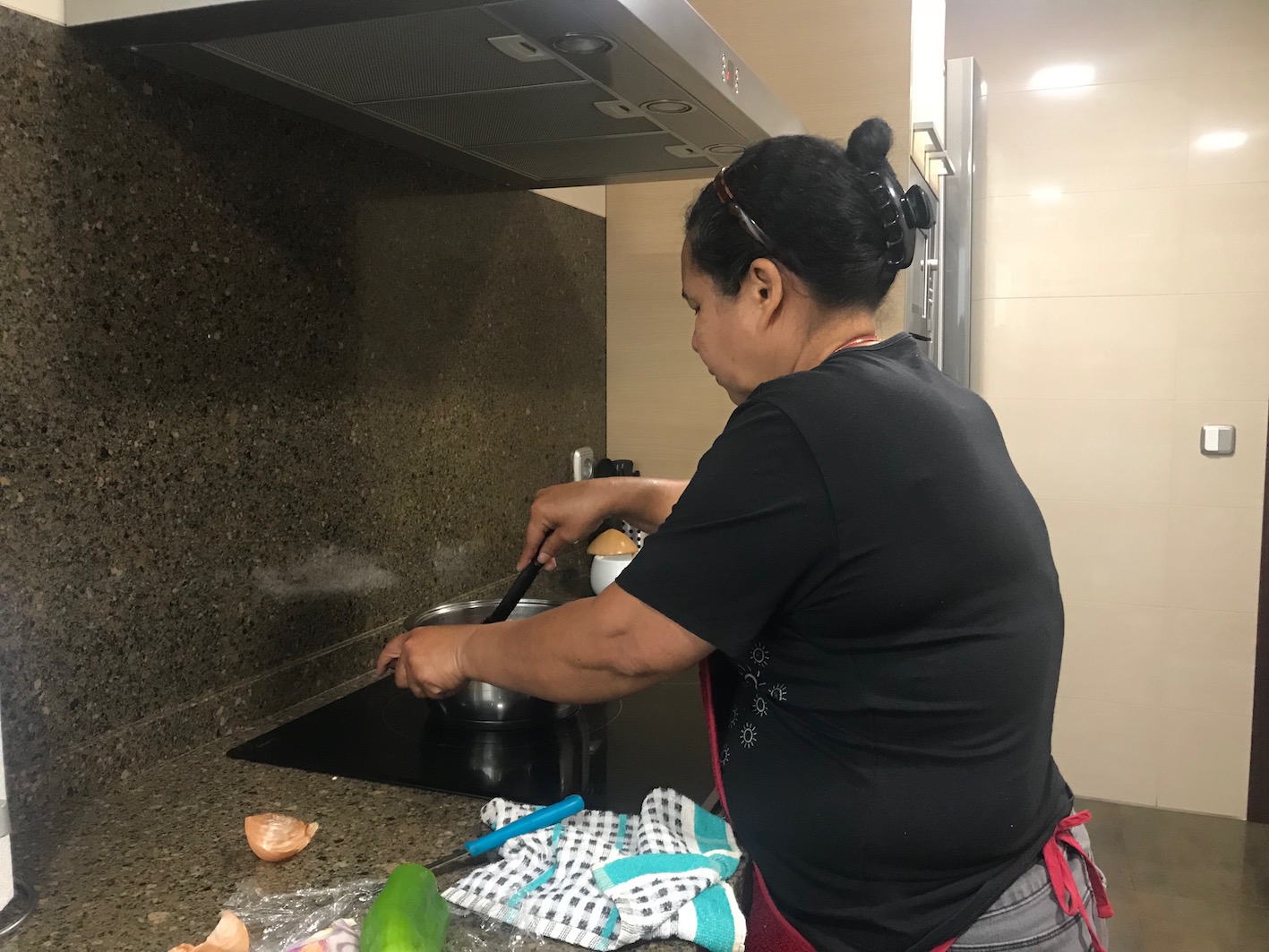 “Within two weeks of arriving I started working with a lady who was mistreating me, she told me horrible words” the migrant mother Iris Yaneth states. Firstly she remembers staying in her bedroom alone for many days. Maribel Barrueta says: “It is true that nobody has told us to come here, but we arrived. So, whatever the situation is, we should also be considered humans”.

Gemma Pinyol from Instrategies says that migrant mothers are also excluded, when they are working in a company, only for being a woman. Everything that is feminized is depreciated because they are the “secondary salary”, Pinyol mentions.

Maria López explained that once she was working in a factory as a supervisor. The employees didn’t listen to her due to her status as a migrant. They ignored her until the boss told the employees not to do so. She felt undervalued and she finally quit the job.

Maribel Barrueta wants to return to Venezuela in the future. In contrast, Míriam Moncada only wishes to come back for vacations. Their children shape this difference. If they are young and they are still studying, they think there is a need for the mother’s help.

As Gemma Pinyol says, migrating is not an easy process. Women face low wages, unstable jobs and inequality.  “Children push you to do many things,” Míriam Moncada says.