London is a land of iconography. The London Underground roundel has become an internationally recognised symbol of London, the design for the latest Route Master bus gripped the attention of the capital in 2012 and every non-London native has a picture of themselves standing in or next to a big red phone box.

Of course, 30 million people do not visit London every year just to look at a black cab, but these little things, so emblematic of the city, create the London experience for visitors and Londoners alike.

But what if these iconic shapes and colours were at risk of disappearing from our daily lives and on our regular city sprints we became bombarded with information about what to watch, what to buy and what drugs you need to be happy?

This form of advertising is so profitable, that TfL has invested £82.9 million into an advertising estate upgrade on public transport routes. TfL and the DfT (Department for Transport) claim that these revenues go into keeping fares low and supporting transport infrastructure across London, the payoff is that we are faced with more advertising on our daily commute.

TfL, however, has recognised the influence advertising can have on our lives and introduced stricter measures on what can be advertised on the buses, tubes and cabs that make their way through the capital every day.

The first proposal was the London Food Strategy released by the mayor of London, Sadiq Khan, which outlined regulation on how fast food companies are able to advertise on public transport.

This led to new legislation passing on February 25 “to ban advertisements for food or drink that is regarded as HFSS (high in fat, salt or sugar),” according to the TfL London advertising report. 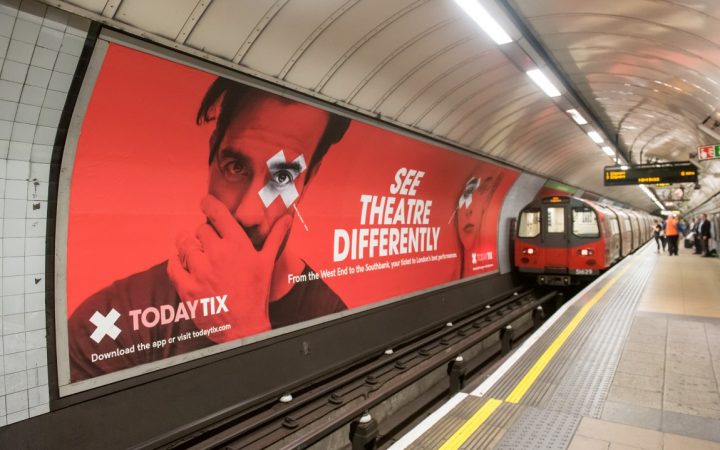 Advertising on the underground provided by Media Agency Group

“They know that advertising works, they know that it influences people and complete generations. So, they take into account a duty of care they have to the people,” Jade Evans, an Account Manager from Media Agency Group said about TfL’s HFSS food ban.

But even these stringent measures let some fish slip through the net and the result can be disastrous. In March, the Michael Jackson Innocent Project, a group that aims to clear late pop singer’s name of sexual abuse accusations against children, began a crowdfunding project for adverts that proclaimed the singer’s innocence.

The ads used hashtags such as “#MJINNOCENT” and the slogan “FACTS DON’T LIE. PEOPLE DO”. Charities that aim to protect victims of sexual abuse reached out to TfL, expressing concern that the ads were insensitive and were at odds with TfL’s own impartiality regulations. The ads were released in response to the Channel 4 documentary, Leaving Neverland.

Stephen Spense, head of BA Advertising at the University of Arts London says it is: “purely because of the sheer amount of advertising that goes on and especially seeing as it is only one bus, it is different if it’s a campaign,” adding that he believes: “they probably didn’t even look at it, and if they did, they would have been like whatever, its only the one thing.” The campaign was incredibly successful, immediately making headlines within the first day of the advert’s release.

According to Exterion Media, a trusted partner of TfL’s advertising department, bus ads are the most successful form of outdoor marketing in London. Exterion claims that 91% of Londoners can spontaneously recall a bus advertisement and the average Route Master bus spends 70% of its time in central London.

This combined with more than 700 bus routes in the city and 2.2 billion passenger journeys a year, and the simple fact that around 85% of us actually prefer buses with advertising on them, means that we are highly exposed to outdoor advertising.

“I think a majority of people see it more as a welcome distraction to their daily commute. When people are commuting, they are in more of a mindset to take in new messages. They want new inspiration; they want to know what is hot on the market right now,” Evans claims. 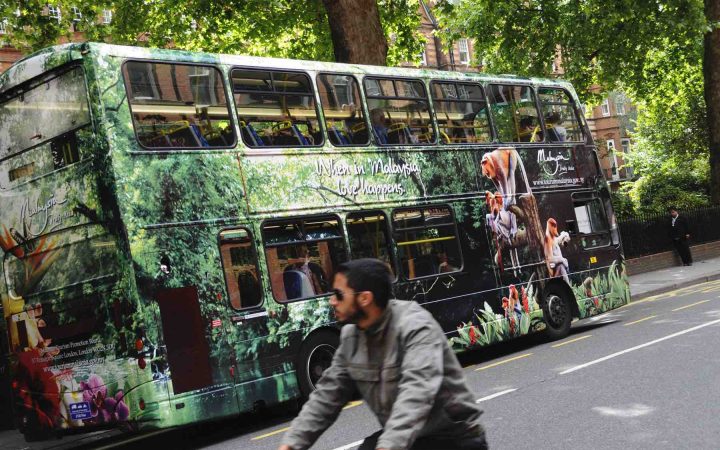 The big question is: are we going to lose the iconic big red bus and should we be worried about losing a big part of London’s identity as advertising spreads its way through the capital?

“I think it is part of the landscape,” says Spense: “if you didn’t have it, it would look strange, if you took it away people would probably want it back. It is visually stimulating and every now and then you get something that is absolutely beautiful.” Evans agrees, saying that: “user experience is always at the heart of every development. I have 100% faith in TfL and their media partners to act appropriately within these environments.”

If we got to a point that the advertising market was so over-saturated that it begins to become a problem it is likely that we would see a return of the big red bus. But it would be on the advertiser’s terms.

Spense’s prediction is that: “somebody will go back to the old fashioned red bus just to stand out if the market becomes over-saturated. If they do, it will be market-driven instead of being anything altruistic.” He also believes that this is not a reality we need to worry about: “ultimately it is not in the brands best interest to irritate the consumer by advert bombing them.”

There have been times however where TfL’s outdoor advertising has been used as a cause for good. In the wake of the Grenfell tower fire, the tube station roundel was adapted and turned into a heart shape with Grenfell reading across its centre. The design was created by local designer Charlie Crocket, to raise money for the survivor’s trust Love for Grenfell.

The design was later used at a memorial for those who lost their lives in the fire. The roundel again played its part as a united banner for Londoners to stand under together against adversity. TfL had every right to take up a legal challenge against the adapted roundel design but wisely chose not in this case and have allowed the designers to raise money for survivors groups.

On a similar note, during the 2016 World Cup, Southgate station, a Grade II-listed site, briefly had its name changed to Gareth Southgate Station to show support for the team that made the semi-finals that year.

Again, during this year’s pride celebrations, TfL came out in support of the event by installing rainbow-themed roundel’s in central London stations and changing staff uniforms. The TfL commissioner’s report states: “Dressed in the colours of the rainbow and equipped with rainbow roundels, our staff sent the very clear message that London is open and welcomes you, regardless of background, religion, race, gender, disability, age or sexual orientation.” 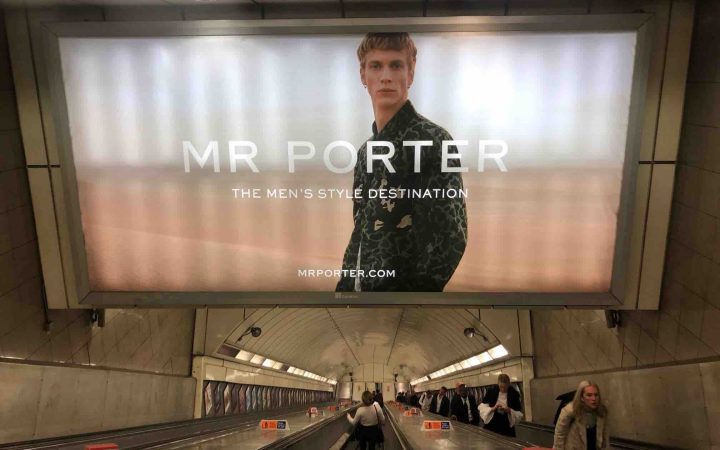 “People will trust outdoor advertising, that is why you see lots of finance and banking businesses use heavy outdoor advertising because trust is so important to them.” Evans also added that Facebook made use of an intensive outdoor advertising campaign after the Cambridge Analytica scandal during which Facebook came under fire for misusing user data, losing the faith of their consumer base as a result.

Ideally, we would see advertising companies only working with socially and environmentally minded companies but as Evans puts it: “businesses make far too much money from oil and petrol companies and the like, it is a nice thought for all companies to be green and to be for the good of everyone, but you can’t please everyone. Businesses are there to make money.”

Media Agency Group has worked on advertising projects ranging from the World Avacado Organisation, a campaign that outlined the health benefits of eating avocados, with Tesco; to Jet, a fuel company that offered the chance to win £1,000 worth of free petrol.

For younger people, advertising has always been there, it is part of the fabric of city life and a majority of us are equipped to protect ourselves by reserving some logic when we make decisions based on the advertising we see.

Advertising is a by-product of life in a capitalist and democratic society. For some, it is a small price to pay for freedom. For others, it is evidence that we are racing towards a dystopian future where global corporations control our minds.

Either way, it is something that we should all be conscious of, take the time to admire and be sceptical of.