Experiencing drugs for the first time at university is, to some people, considered a rite of passage. The freedom that comes with living independently can present temptations; peer pressure and the need to fit in can encourage students to try new things.

Many young people will smoke or consume marijuana at some stage in their lifetime while others will have started at a younger age. 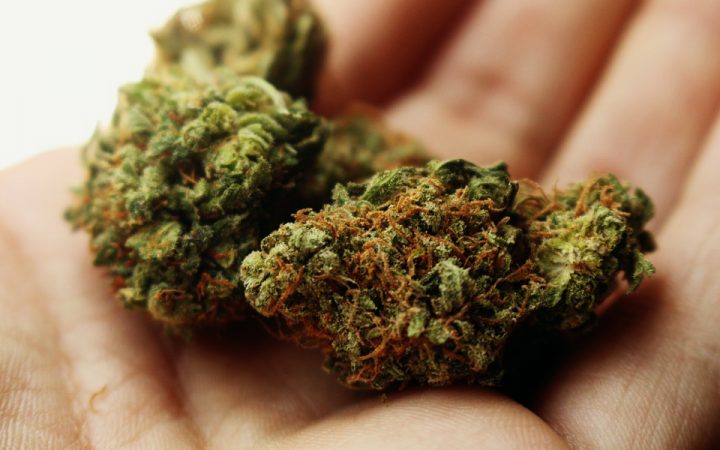 Cannabis is currently a Class B drug, it is illegal to possess, give away or sell. Despite the classification, there is a relaxed attitude around smoking cannabis with many people using it as casually as smoking a cigarette. For many in society, it has become an accessible and socially acceptable habit.

Cannabis use was once a sub-culture but has moved more into the mainstream. Cinema is no stranger to the character of an endearing and functional (occasionally haphazard) stoner. Films charting this legacy from the original smoker duo Cheech and Chong, the loveable Saul from Pineapple Express and the more contemporary pair of Harold and Kumar.

These comedic portrayals effectively glamourise cannabis smoking and never show the serious side effects which may be present. The relaxed attitude around cannabis consumption overshadows the negative effects of cannabis use, the effects it can have on adolescent brains especially can be devastating – many people see marijuana as being a ‘safe’ drug but if used over a long period of time there is evidence that suggests it is corrosive to mental and physical health. 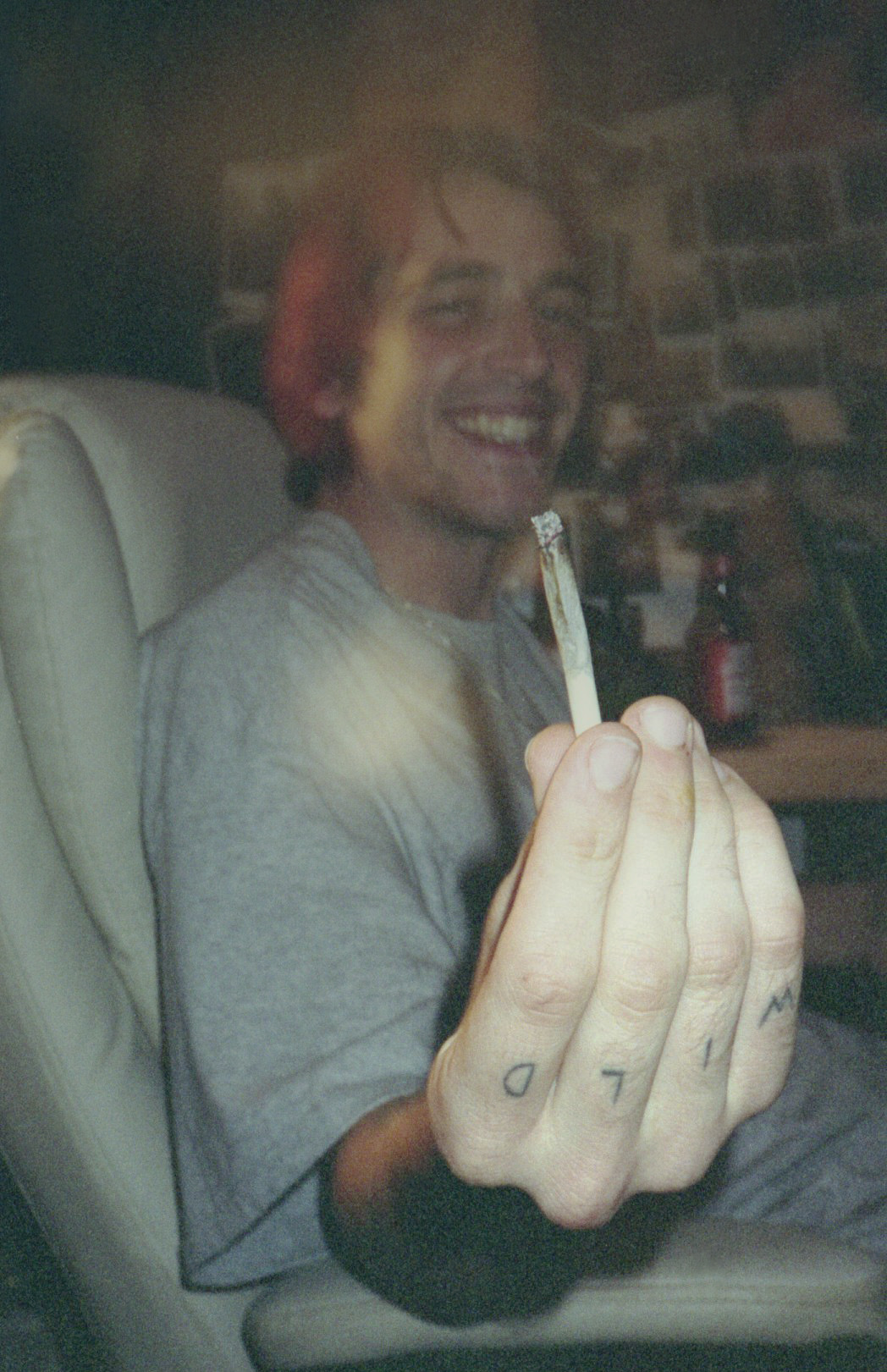 Smoking cannabis maybe easy, but the effects can be severe [Tom]

In particularly bad cases smoking or using cannabis can cause psychosis, a severe mental illness with symptoms such as paranoia, delusions and hallucinations. For a first episode of psychosis, these phenomena can be extremely frightening. Psychosis is more common than you would think, as many as 3 in 100 people will have an episode at some point in their lives.

Tom, from Brighton, has been struggling with a close friend of his that has been experiencing extreme paranoia and hallucinations.

“It’s really hard because none of us knows how to deal with it. Smoking weed is something we all like to do and it’s mostly what we do when we all hang out. At first, we would laugh at him for feeling paranoid, we knew it was because he was smoking too much and thought it would stop as soon as he stopped smoking it. But it hasn’t and if anything it’s getting worse, he’s so anxious, he told me he feels like people are watching him constantly and he’s especially anxious about using his phone,” Tom told Artefact.

“He deleted all of his social media and has his phone turned off because he’s so paranoid about people listening to his conversations, it’s not normal. As a bunch of boys we don’t know how to act, he gets angry and confused and it’s becoming hard for us to see him truthfully. I know it’s affecting all his relationships, it’s really sad.”

Tom explained that his friend had only recently been experiencing these symptoms and that he thought of him as being “not the type of person to have a mental illness.” According to the NHS 25% of paranoid psychosis cases are caused by the use of cannabis.

A leading addictions expert based at the Priory hospital in South London has issued a strong warning about the use of marijuana by young adults and its links to paranoid psychosis. The figures show Cannabis has led to more than 125,000 NHS hospital admissions in the last five years, 15,000 of those cases involve people under the age of 25. These figures are startlingly high – it makes you wonder why cannabis isn’t considered to be a harmful high-risk drug.

“Firstly they go through a period of assessment part of which is a urine drug screen, this may be with or without prescribed drugs depending on their behaviour and whether they are acting on their psychotic beliefs. If they present themselves as a danger to others, they would be given prescribed medication to calm them down.

“However, if they are calm and are engaging with the period of assessment they will go through drug free. The main purpose of this is to assess whether or not the psychosis is drug-induced or not. The length of this process depends on the individual it can be a matter of days and in some cases months or years.”

“Teenagers are particularly vulnerable to cannabis because of their brain development. The brain is still developing in the teenage years up to the age of around 20.”
Dr Niall Campbell

There are many anti-drug and educational campaigns that are trying to help people with their drug-related issues. Talk to Frank is the longest-running drug helpline in the UK which was launched in 2003 by the Department of Health and the Home Office.

Talk to Frank offers a friendly helpline which people can use to contact with their questions or fears surrounding drugs. It offers therapy, counselling and support throughout the U.K. whilst also being an educational platform with the main goal of informing young people on the risks of drugs.

When contacting Talk to Frank to get advice on what to do if you are experiencing cannabis psychosis, they offer a service where you are able to talk over the phone to a representative. They explain that in most cases of cannabis psychosis the symptoms should lessen or go away when the person has stopped smoking it.

However, in many cases, some effects can be long-lasting and can cause other mental health issues such as schizophrenia as using cannabis can trigger underlying mental health conditions.

The representatives are helpful, offering establishments in local areas that help with people battling psychosis. In these cases it is vital that the person affected has a good support system from their family and friends, sadly it is common for many people suffering from psychosis to isolate themselves.

Dr Niall Campbell a Consultant adult general psychiatrist said: “I am seeing an increasing number of young adults with paranoid psychosis – a schizophrenia-like illness and depression, which has developed from marijuana use. Teenagers are particularly vulnerable to cannabis because of their brain development.

“The brain is still developing in the teenage years up to the age of around 20. We know the chances of developing mental illness from using cannabis are greatly increased depending on how young you are when you start smoking it, the younger you are the greater long-lasting effect it has on your brain.” 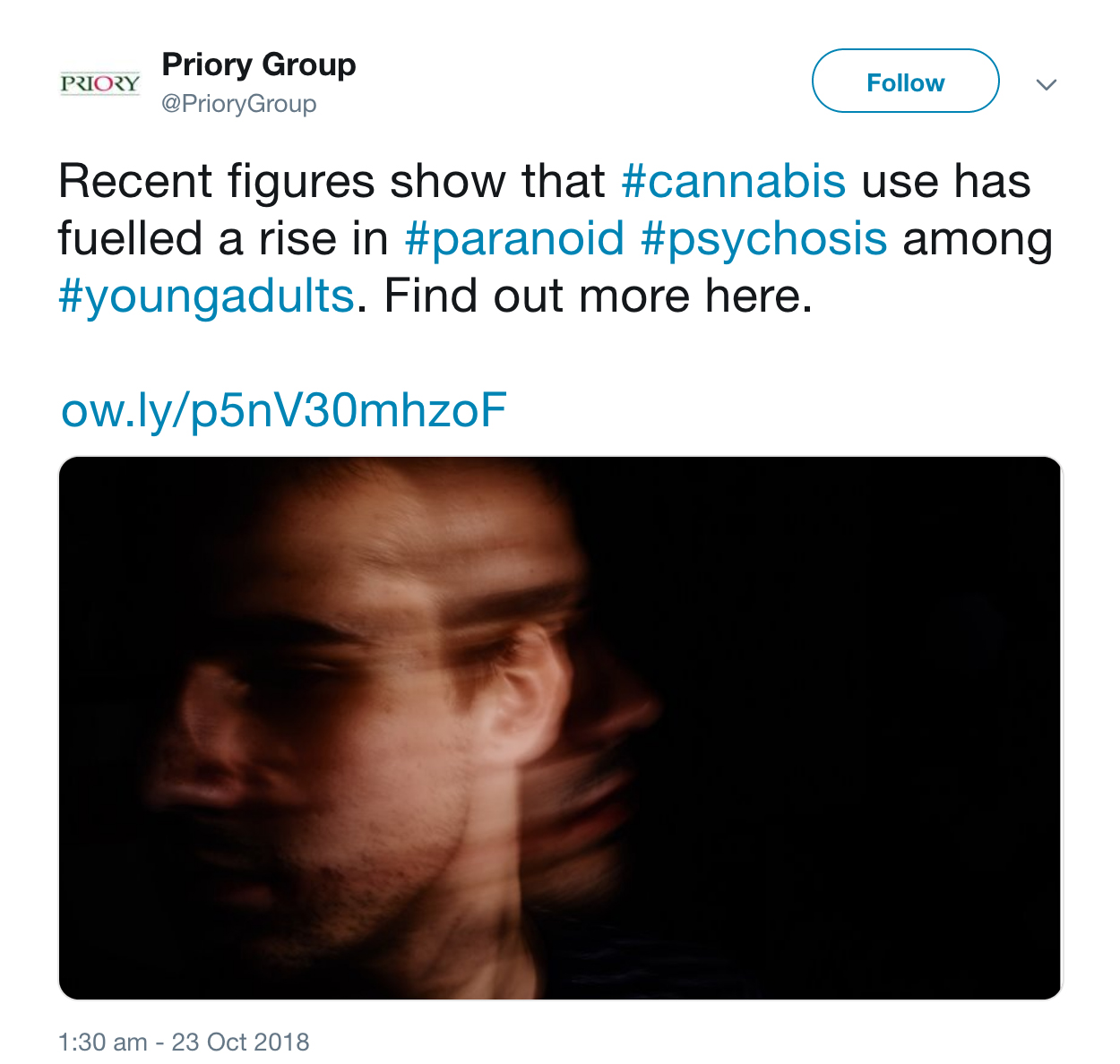 A tweet from the Priory Group talking about psychosis in young adults.

Smoking cannabis can affect your brain, just like the stereotypes, people are said to be slower and somewhat less able and motivated when smoking cannabis compared to someone who has not. Of course, this depends on the person – most commonly those who are affected by cannabis psychosis are men between the ages of 16-25.

Another factor increasing the number of cases of psychosis each year is that the chemical profile of cannabis has changed. An article published by Live Science stated that cannabis is “Up to 100 times stronger then substances around in the 1960’s” people are chemically enhancing cannabis with stronger THCs, which is the main psychoactive part of cannabis.

It is the THC in the cannabis which causes the feelings of paranoia, anxiety and psychotic episodes. In the 1960s when smoking cannabis was extremely popular with many groups the levels of THC were lower – the negative side effects were not as dominant as they are now in 2019.

To look at cannabis consumption from different perspectives it’s difficult to form a definitive opinion, especially with the good PR that surrounds marijuana in the popular media.

But to look deeper and talk to people who have seen the negative effects of this easily-obtainable substance it is startling to think that consumption is accepted and somewhat encouraged by large sections of society when the returns on this investment of time and money can end in terrifying and debilitating mental conditions.

If you are struggling with symptoms of psychosis, there are many organisations that can help. Most importantly having a strong supportive network of friends and family is vital in getting better. You must not feel afraid or embarrassed about expressing your concerns about the side effects of using drugs.

Featured image by the Oregon Department of Agriculture via Flickr CC.