Graffiti in the streets of London, or anywhere in the world for that matter, is widely unaccepted by many people. Bystanders consider graffiti as anti-social behaviour linked with gang crime.

However, graffiti is probably the most misunderstood art form and self-expression. A simple ‘tag’ or ‘throw up’ of a person’s pseudonym is more than just a senseless act of vandalism but a language in itself, telling a story for the urban masses to read on the streets.

However, many of these young artists are risking criminal charges and sometimes their lives to get their names up on a wall. To understand the underground world of aerosol cans and vibrant shapes, tapping into the minds of these artists is where the true story unfolds.

[pullquote align=”right”]“they are usually really peaceful, even though there is so much danger of getting hit by trains”[/pullquote]The question reignited debate after three young graffiti artists Jack Gilbert, 23, Harrison Scott-Hood, 23, and Alberto Carrasco, 19 were found dead in the early hours of the morning on June 18, 2018 on the tracks between Denmark Hill and Loughborough Junction stations. The young men suffered fatal injuries after a train hit them while they were painting track walls.

Since then, the British Transport Police (BTP) have implemented measures to reduce the crime being committed. The BTP claim that £10 million is spent on the London Underground and Network Rail claim that £5 million is spent on all other rail lines across the country to clean up graffiti vandalism. Those who are caught will be faced with a fine or jail sentence. Graffiti is more prominent than ever and it doesn’t look like its slowing down anytime soon.

A young writer known as Testa, from south-east London told Artefact why he risks his personal and professional life in the name of graffiti.

Testa started doing graffiti at a young age, seeing tags at his local skatepark. Like many artists, skateboarding was his gateway to the scene. Both sub-cultures draw similar parallels of adrenaline, fear and creativity so Testa’s gravitation towards graffiti was not unlikely. 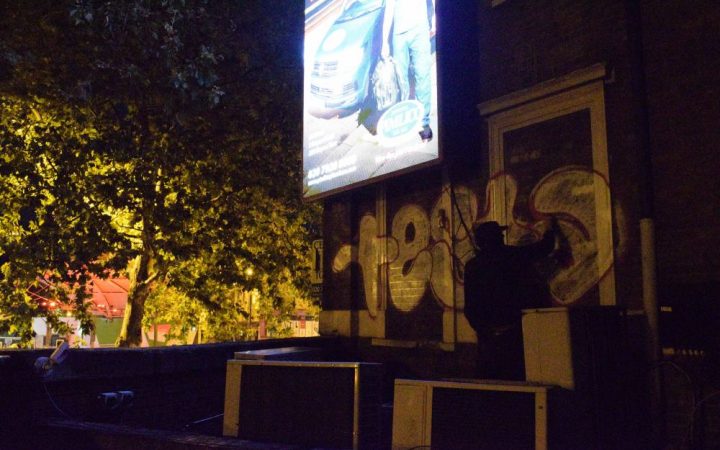 Testa regularly conducts late-night missions on both the streets and trackside to cover London with his name. Fully aware of the precarious nature of graffiti, the illegality of the art is what “makes graffiti, graffiti”.

There are 358 ‘legal walls’ in the UK and 35 of them are in London. These are spaces where artists can practise their art without running the risk of being arrested or worse. Testa refuses to use them and says: “the lack of danger and fear gives me no rush.” Painting on legal walls for Testa is too neat, whereas he prefers the rough and rushed look of a street wall.

There is a huge debate about the difference between graffiti and street art. Typically street art is done on legal walls or commissioned on street walls, although Bansky, a street artist, goes against this norm and his work is still illegal. Areas in London, like Shoreditch and Hackney Wick, are famous for their street art, which is pushing the more covert culture of graffiti tagging further underground.

Testa explains that the reason why he expresses himself illegally is a sense of achievement once he has painted a spot. Once a spot has been taken, usually one which is visible to passers-by, the spot is gone permanently.

One would think that artists could go over another’s work leaving the security of their art at jeopardy. But no, there are unwritten rules and strict etiquette on the streets.

[pullquote align=”right”]“I like my graffiti centred around trains but it’s hard to paint trains now”[/pullquote]Even Testa had to redesign his tag halfway through to avoid blasting over a fellow writers work. Following the rules earns you more respect on the underground scene. There are links with an artists ego and graffiti. Testa said that he is “showing the world I’m here” and that his self-esteem is boosted when he sees his tag around London.

The aerosol scene in London fully took off by 1986, coming from New York. Crews like the Chrome Angelz pioneered graffiti writing and from then names such as Ink 27, Cast, Caos, Set 3 and Tilt carved way for the unclean and chaotic style of Subway Art.

“I like my graffiti centred around trains but it’s hard to paint trains now,” Testa said. Writing trackside and street walls, by nature, has rough lines and scribbled shading. “I like it when the paint drips and the lines aren’t super sharp but scruffy instead.”

“We got caught in Shoreditch, which is a silly place for [the police] to care about graffiti.” The police searched Testa and a group of graffiti artists after being falsely accused of stealing bikes in the area. Although no-one was charged for bike theft, the police issued a warning for the artists once they found spray cans and etching tools.

Painting a train track for most graffiti artists is the ideal place. For Testa, “they are usually really peaceful, even though there is so much danger of getting hit a by train.”

Graffiti writers are less likely to be caught by the police on train tracks but, in turn, insist on putting their lives at risk, scaling the busy London train lines in the middle of the night. Testa adds: “you’re both relaxed and on edge at the same time.”

Ultimately, Testa does graffiti as a form of therapy. Some people go to the gym, read a book or go out with mates. But for Testa, he seeks the solitude of the tracks in the twilight hour, not in zones 1-6, but in his own microcosm of London’s trains. Testa says that he becomes a “distant franchise,” from the hectic turbulence of London.

For an entire sub-culture to exist the way graffiti does, is a phenomenon that is far and few between. There appears to be nothing that will stop the hardcore writers from doing what they love.

The complexity of the art form is something that only those who risk life and limb for their art can truly understand, the fact that the law can not control the creative rebels is the celestial beauty of the urban underground scene is evidence enough.

By Rella Jefferies
4 Mins read
Frida Kahlo, the most celebrated Mexican artist, has been heavily misrepresented and appropriated following her death.
Fashion