Can Egypt survive being ‘free and corrupt’?

The dust and the flies are busy invading your private space, crawling everywhere and way too close to your mouth, your nose, eyes and ears.

There is traffic everywhere, and goats, horses, donkeys, cats and dogs cross the streets between the intense chaos of scooters, buses, and cars. The amount of car horns you hear within an hour competes with the number of flies you fight off.

More than 40% of the Egyptian population live below the poverty line. 30% of all young men are without a job, and this is one of the reasons that ISIS, which is still occupying the North Cost of Sinai, have no problems recruiting new soldiers.

So what does Egypt’s future look like? When you mention democracy to any locals in Egypt they laugh at you.

“We don’t think like Europe. Our country is free and corrupt. We do what we want and we help each other do it. If you know rich people, then you’ll be rich. That’s how it works here. There is no way we’ll have democracy within the next 50 years.” said Moataz Elhomy, who lives in Maadi, a suburb to the south of Cairo.

After 18 days of nationwide protests against president Hosni Mubarak and his near 30-year rule, the autocrat stepped down and the military took over. In 2012 the Muslim Brotherhood won nearly half of the seats in multi-stage elections for the first post-Mubarak parliament and Mohammed Morsi became the president.

As early as 2013 the campaign Tamarod (meaning rebel) gathered signatures calling for Morsi’s removal. The same year demonstrations demanded his resignation and Abdel Fattah El-Sisi announced Morsi’s removal and installed Adly Monsour as interim president. El-Sisi then retired from the military and ran as candidate for president.

In the years after 2011 many people were killed during the protests and demonstrations and in 2013 suspected Islamic militants killed 25 policemen in the Sinai Peninsula and escalated over the following month with shootings, bombings and suicide attacks against security officials and troops. 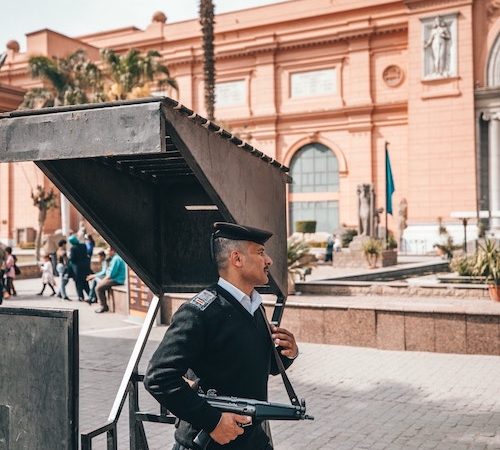 Military man with a gun.

The same year, the Muslim Brotherhood was designated as a terrorist organisation and was later banned and some of its members were sentenced to death by an Egyptian court for violence and the killing of policemen. El-Sisi won the presidential election in May 2014 with 96.9% of the vote. His opponent, Hamdeen Sabahi received 775,000 votes, fewer than the 1.4 million invalid ballots cast. The turnout was just 47.45%.

In 2014 a Sinai-based jihadi organisation, Ansar Beit al-Maqdis pledged allegiance to the Islamic State group which gave the organisation a foothold in Egypt. The following years were filled with terror attacks; a bomb brought down a Russian airliner that had taken off from a resort of Sharm al-Sheikh, killing all 224 people on board. A suicide bomber inside a Coptic Orthodox Church in Cairo killed at least 25 people. In 2017 two suicide bombers killed at least 45 people in a church close to the costal city of Alexandria. El-Sisi declared a state of emergency nationwide.

There is no doubt why people laugh at you when you mention democracy in Egypt.

Around 40% of women in Egypt are illiterate and 80% are circumcised, a form of genital mutilation. It goes without saying that the unequal rights for women and men in Egypt need to be changed, to have a chance to move out of poverty.

“In the Middle East, we see more women ambassadors, judges, CEOS, ministers, etc. But does that mean they are equal to men?” This is the question posed by Firas al-Altraqchi, professor, journalist and editor who has covered the Middle East since 1992.

“The challenge here is to determine whether women carrying out jobs and positions once exclusively dominated by men means there is a social contract which guarantees equal rights. I don’t necessarily think so. I do believe there is increasing momentum to put women in better situations. In 50 years, the situation may be upside down, who knows?”

Many children are taken out of school after a few years and the ones that stay in school only learn a limited curriculum due to the number of children in the classroom.

The media in Egypt are owned by the government and freedom of speech does not exist. In August 2019, Egyptian security forces blocked access to Tahrir Square, the highly symbolic focal point of the 2011 revolution, to stop any protests against the president.

Roads were closed and during the day social media channels were shut down for hours. el-Sisi’s expansion of security has led to a rise in torture and police brutality that could constitute crimes against humanity, according to Human Rights Watch, who estimated that 60,000 political prisoners languish in jail, including journalists. 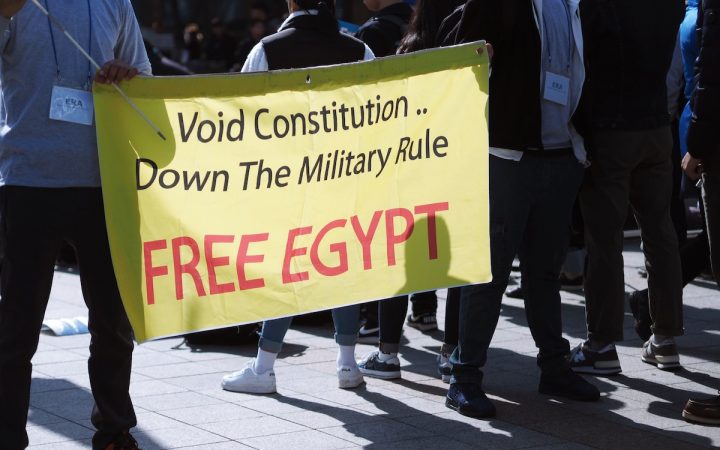 Protests are a part of daily life in Egypt [Unsplash:Ra Dragon]

Nevertheless, Egypt has been experimental and innovative by generating new jobs for its growing population. Everything in Egypt can be delivered, even if you cannot find it online, you can call the shop next door and ask them to bring whatever it is that you need.

If they do not have it in the shop, they will find it in another store and bring it to your doorstep. You have to be patient, but the luxury of being able to order online 24/7 and receive it to your doorstep at any time is incredible and this allows more people to have a job.

The simple experience of going to a hairdresser is an interesting one. Whilst one person is washing your hair, another one is cutting it, and a third person is removing the cut-off hair with a gentle breeze from the hairdryer, and a fourth removing the hair from the floor.

Then there is a fifth person you have to pay, after your treatment. These people are not a necessity for the business, but it demonstrates how important it is for the community, that more people are able to have jobs and make their own living and so stay out of poverty.

Despite the repressive regime, with its massive population, Egypt is becoming one of the fastest-growing entrepreneurial start-up hubs in the world. Nafham, an online education portal for children that are interested in learning, is one of the start-ups that focus on the future of Egypt.

Its founders are ambitious entrepreneurs who see new opportunities to make money in the digital age, but they are idealists as well and argue that they have a social responsibility. Nafham is free and therefore allows everyone with access to the internet, to enter the platform.

Despite the fact that Egypt has very little regulation, endemic corruption and a 19th century bureaucracy which is still largely paper-based, 2018 was a promising year for the entrepreneurial ecosystem in Egypt.

At least 80 start-ups raised investment and positioned the country among the fastest-growing in the region, according to Magnitt Data. In the top list of the start-ups was SWVL, an app that provides buses to every neighbourhood in Cairo and allows people to share a ride for a flat fare with no surge pricing.

Another start-up is Basharsoft which is an online job site to help people finding jobs, similar to job platforms like Jobnet or Jobindex.

“We do what we want and we help each other do it.”

Of course, startups like Nafham, SWVL, and Barsharsoft are not going to help Egypt out of poverty on their own. Improving the education system and getting more people into work will require comprehensive political reforms, but it will slowly help some of the issues in another direction.

Recently we published an investigation of Cairo’s treasure of trash, which featured the trash collectors in the Garbage City, one of the suburbs of Cairo. How is it possible that a country with very little regulation, endemic corruption an a 19th century bureaucracy has a growing entrepreneurial ecosystem but in contrast still rely on the people of Garbage City as their trash collectors?

“This is one endemic to almost all of Africa where the informal economy is not only growing but indeed thriving.” said al-Atraqchi. “Trash collectors, or permit me to also classify them as trash sorters for recyclables, are adding to the informal economies of major African cities. It is the new trend of 21st Century Africa and Cairo is no different.

“With the trash sorters there is a grassroots economic momentum that is so far void of the type of systemic corruption of major corporations and companies. They pay no taxes, but at the same time get no social and economic benefits.

“The question is how to move them into a position where they can reap the benefits (if such exist, and which differ across Africa) of the formal economy?” He explained.

What al-Atraqchi is talking about here is the digital recognition – the ability to be able to apply for digital citizenry platforms and apply for bank accounts, social welfare, health, and so on.

“Will Egypt move in that direction? Maybe, if the entrepreneurial train stops at a station and picks them up as passengers. This would require a whole new approach to the political economy of the country,” he concluded.

The recognition of being alive is the instant feeling you get in Egypt. The lack of planning is a freedom in itself. If you do plan, you change the plans at least twice and postpone another two times.

You never know if it will happen, which makes it even more successful when it does work out. This country is fully functioning with the presence of all the issues discussed here and more.

But there is also a certain charm to the lack of structure in a country where things keep moving on. How can it move on without structure?

It is a mystery how Egypt does it, but they do.