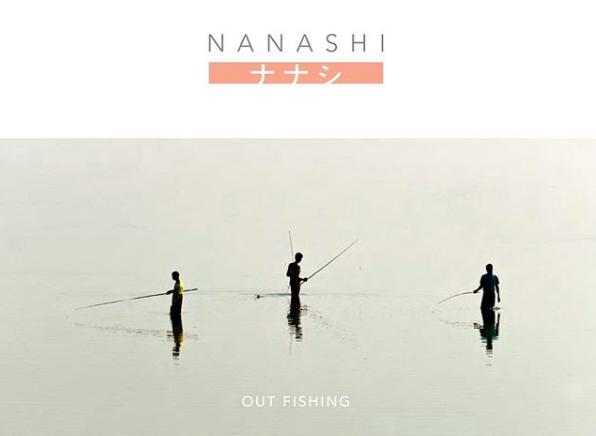 Nanashi is an independent Japanese restaurant tucked away on Rivington Street in Shoreditch. If you did not know it was there, you could risk walking right by it.

The place itself is small, but makes use of every square foot. On each side of the front door is a full-length window where customers can sit and people watch the world go by while they enjoy their sushi.

The inside is a modern western twist on a Japanese style restaurant. Tables line every wall, standing close together, making for a tight squeeze with your neighbouring diners.

There is also the option to sit by the bar and watch the chefs prepare various dishes, or to sit almost hidden away in the back of the restaurant in big booths; most likely meant for larger parties. 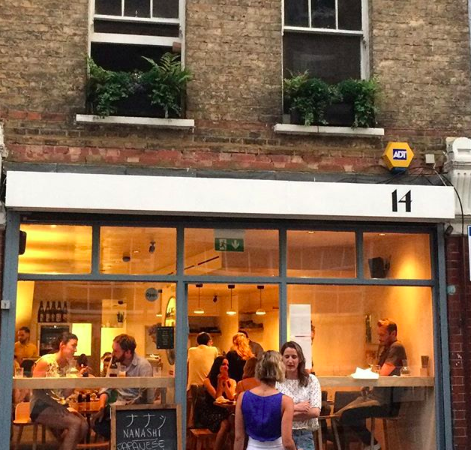 The walls are laid bare, following the overall minimalistic interior design, apart from the string of specials that is hung on a wall. This way of presenting specials is not only trendy looking, but also a nod to the way that specials are presented in sushi restaurants in Japan.

Nanashi is both chic and casual in style and atmosphere, the kind of place that you could wear heels to and bring your parents, or show up in jeans and sneakers for a night out with friends. No one is out of place eating here.

The menu is varied in price – it is easy to get lost in all the dishes and end up spending more than expected, especially on a student budget. However, it is also not a lost cause to remain wallet friendly. For a first visit, it is recommended to dish out and try Nanashi’s most popular dishes: the Nasu Dengaku, sushi sliders, and soft-shell crab.

If sake is still a foreign and distant concept of alcohol, Nanashi offers a wide range with a detailed taste description, as well as sake tasting menus starting at £20 per person.

The Tamanohikari Junmai Daiginjo Bizen (£30 per bottle) comes highly recommended: “Smooth and easy drinking full-bodied fruity sake with banana and honey aromatics.” Alternatively, the Masumi Okuden Kansukuri (£25 per bottle) is: “mellow and mild-mannered in all aspects, with subtle, organic flavours and a hint of rice’s sweetness.”

Not sold on sake just yet? Nanashi is also known for their inventive cocktails, notably their signature Matcha sour (£9.50), Wasabi Margarita (£9.50), and Umeshu Negroni (£8.75). Each of these cocktails are brilliant in flavour and in presentation, having graced many Instagram posts in the past.

Ordering at Nanashi is like any other Japanese restaurant, where you order multiple dishes at once to share with your co-diners; there is of course the option to order more dishes at a later point in the evening.

I started off with Agedashi (£7.50), a traditional fried tofu that sits in tempura sauce. I have never been a huge fan of tofu in general, however I was a big fan of this one. 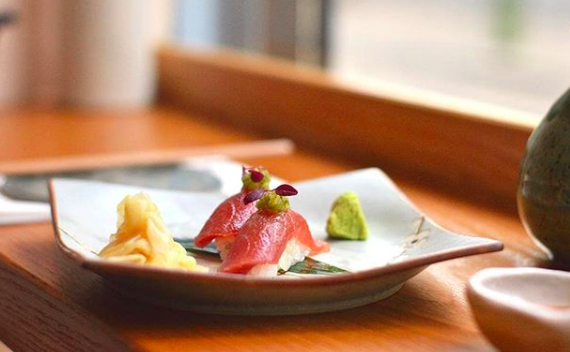 The tofu had a sticky exterior that made it hard to break the big chunks apart, but once broken, the interior was texturally similar to a firm custard. Its taste was not something expected, the tofu has a sweet taste to it, but not so sweet that it could have been mistaken for a dessert.

The tempura sauce was excellent, I had to restrain myself from asking for bread to soak it up – the thought of the remaining sauce going to waste was almost emotional.

Next came Yellowfin Tuna Nigiri (£7.00 per piece), the price per piece may seem outrageous at first, but there is no denying the quality for price. The tuna was so soft to taste that it felt like butter melting on your tongue – the sign of high quality fish that you would not be able to get at most places. It was a moment of impactful taste that was over much too soon, but worth every pence.

Following the softness of the tuna, came the Nasu Dengaku (£8.00), also more commonly known as Sticky Aubergine, creating a huge jump in texture and flavour. Nasu Dengaku is aubergine prepared in sweet miso sauce. Whilst the yellowfin tuna was soft and light, Nasu Dengaku was heavy and intense in flavour – the perfect winter dish.

The aubergine is cooked to softness that is just firm enough to stand upright on the plate, but breaks apart in a stringy manner once it is in your mouth. It is clear that there is more to the sauce than just sweet miso, but what exactly is hard to place.

The dish itself is a wonderful way to serve aubergine, intense and new in flavour but not enough to scare off anyone who is averse to the vegetable. 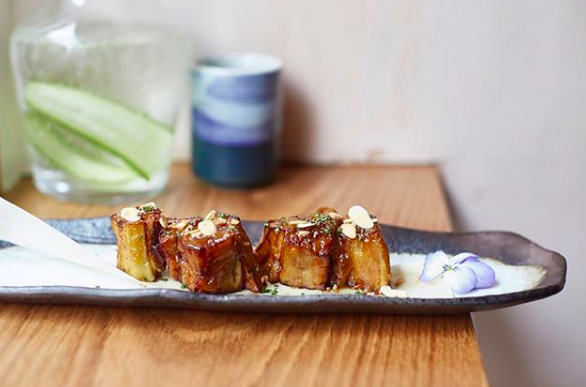 The Soft-Shell Crab Maki (£11.00) and Sushi Slider with Tuna (£5.00) arrived at the same time. The sushi sliders are a novelty dish, one of those that must be tried at least once. The buns are replaced with lightly fried sushi rice – crispy on the outside and soft on the inside, garnished with spicy mayo, spring onion, and ginger.

The tuna was prepared as a tartar, chopped into tiny little pieces and formed into a patty. Much like the yellowfin tuna, the tuna used for the slider was soft and high quality. The flavour of the fish pushed through the other ingredients and was not over shadowed by intensity of the spicy mayo, which I feared that it may have been otherwise.

Soft shell crab is another novelty dish that you must try no matter where you are, it is one of my favourite dishes and never ceases to amuse me with how insane it looks. The surrounding maki rice looks tiny in comparison to fried gangly legs of crab – it almost gives you the feeling that the legs could give a sudden jerk at any moment.

Soft shell crab is almost a childlike joy to eat, it is everything a small toddler would like: fried, crunchy and soft, and fun to look at. It is the type of dish that makes you feel like an adventurous eater no matter how restrained you actually are. 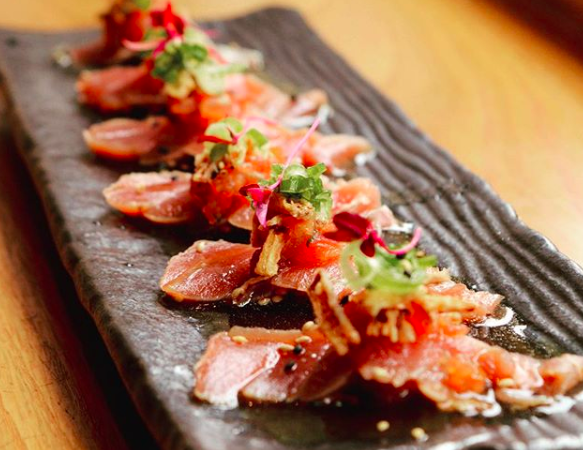 During a last-minute decision between getting another savoury dish or a dessert, despite fullness, I ordered the Tuna Tataki (£13.00), tuna sashimi in truffle ponzu. Tuna and truffle are two of my favourite things to eat, and the combination of the two made it even better.

Once again, the quality of the fish, and the truffle, was well worth its price. The flavours did not overpower the other, but instead meshed really well and left a surprisingly good aftertaste. I was yet again overcome with the need for bread to soak up the remaining sauce or to ask for it in a to go container – the Tataki was a great way to end the dinner at Nanashi and made for a memorable last few moments.

Nanashi is the kind of place that keeps you wanting more – after leaving I wanted to eat everything again and to try all the new dishes from their changing menu. I would highly recommend Nanashi if you are looking for a place to take your parents or a place that will impress your date, but also yourself.