“To TFL and the Mayor of London, Every Journey Matters.” A phrase I’m sure you’ve all heard or read at least a dozen times since the start of the campaign. Whilst Transport for London is undoubtedly making a number of changes when it comes to improving accessibility across the network, it’s clear that there’s still a long way to go.

According to NHS England, approximately 1.2 million people use a wheelchair in the UK with two-thirds of these being regular users. In London, 11% of all adults have some sort of mobility issue and 5% use specialist mobility equipment (Office for Disability Issues). However, this data was last updated in 2011 so it’s likely that the current figures are much higher.

Josh Hepple is a London-based equality trainer with cerebral palsy who regularly has difficulty in moving around the capital: “I love living in the middle of my favourite city but given its size, trying to move everyone around, especially at peak times, can be difficult. It is even harder for me as I use a powered wheelchair,” he says.

Freedom Passes are available for those over the age of 60 and those with a long-term disability and all wheelchair and mobility scooter users travel free on buses and trams. However, these rights do not extend to a disabled person’s companion or carer; something Josh thinks is wrong.

“I almost always travel with my assistant, partly for safety and partly for convenience. I only need them as a result of my impairment to allow me to have an equal journey,” he explains. “Given my inability to quickly articulate, severe involuntary movements and ascending ramps for boarding, it is clear that I can do with help.” 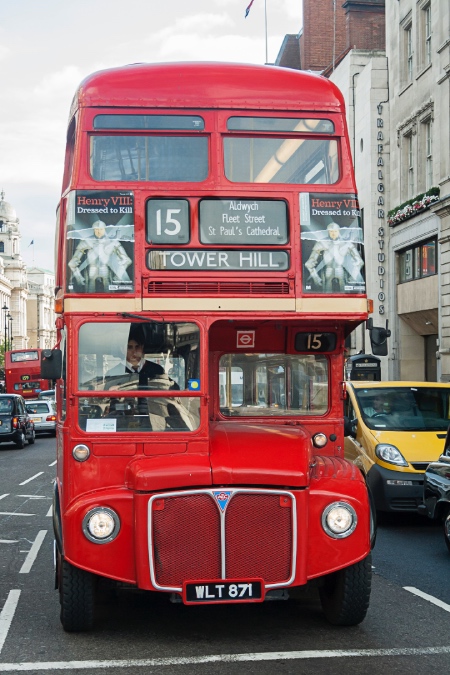 All buses should be accessible but overcrowding and broken ramps cause difficulties [Unsplash:David Henderson]

All 402km of bus routes in London are served by low-level vehicles, however, there’s only one space dedicated to wheelchair users and often this space can be taken up by passengers, buggies and/or shopping trolleys at peak times. “Overcrowding is an issue on all forms of transport,” Josh says. “I generally try to barge my way through however I try my best to travel outside peak times.”

And whilst each bus should have a fully-functioning access ramp, Josh notes that: “There are far too many ramps that don’t work and drivers don’t always understand their relationship to the pavement. It can get fatiguing for bus drivers to become adamant their ramp has broken when in fact it just jammed against a paving stone and the driver has to just drive forward a metre.”

There is also a great deal of difficulty when considering the understanding and attitudes of able-bodied passengers. “There is always complete pandemonium as the drivers have to close the doors before the ramp can come out. Everyone becomes agitated and there is usually some aggression,” Josh explains.

“I always feel bad for the driver as someone will usually scream at him when he has closed the doors in anticipation of putting the ramp out, everyone thinks he is just going to drive off.”

All trams and all stations on the District Light Railway (DLR) are accessible, however these lines mostly serve South and East London respectively. The London Underground (Tube) network offers the most comprehensive coverage of the city, but only 79 out of the capitals 270 stations have some sort of step-free access. Around half of these are step-free from the platform to the train but even these come with varying degrees of individual accessibility.

In addition, some stations only have step-free access on certain lines or in certain places. For example, Paddington station has step-free access on the Circle and Metropolitan lines but not to the Bakerloo and level access isn’t always available in the same place at each station. Limitations such as this can lead to longer journeys and subsequent delays for disabled users.

“I live on the Circle Line. By its very name, problems are created. Tubes can bend but ultimately each carriage can only get so close to a rounded platform. What’s worse is that the gaps are at different places at each station,” Josh says.

“I could, for example, safely board at Farringdon in the second carriage which has no gap and yet only realise once I had arrived at Westminster that the gap was too big to safely disembark. Of course, TFL have fantastic staff but often the passenger on board would not have the ability to signal that he wanted to get off.”

Transport for London spokesman Ruben Govinden said: “Some of the network is more than 150 years old – accessibility wasn’t even considered worth thinking about then. And in some cases there’s physically not the space, given the number of users, to make the station step-free from street to train.”

Josh agrees that we can forgive TfL for not upgrading all of the Tube stations. But you’d think that the newly constructed Elizabeth Line would be completely accessible from the street to the train, right? Wrong.

Built by CrossRail, the 60km line stretches from Reading and Heathrow in the west to Shenfield and Abbey Wood in the east. It will have 41 stations all with step-free access from the street to the platform. However, only 13 of these will be fully accessible and each train (approximately seven to nine carriages long) will only have four dedicated wheelchair spaces.

It’s important to note that accessibility issues are not just prevalent across TfL’s network but across most (if not all) rail networks across the UK. According to a report published in the House of Commons Library: “As of January 2019, all stations provide at least one type of disability access” but (as shown in the table below) it is incredibly varied. 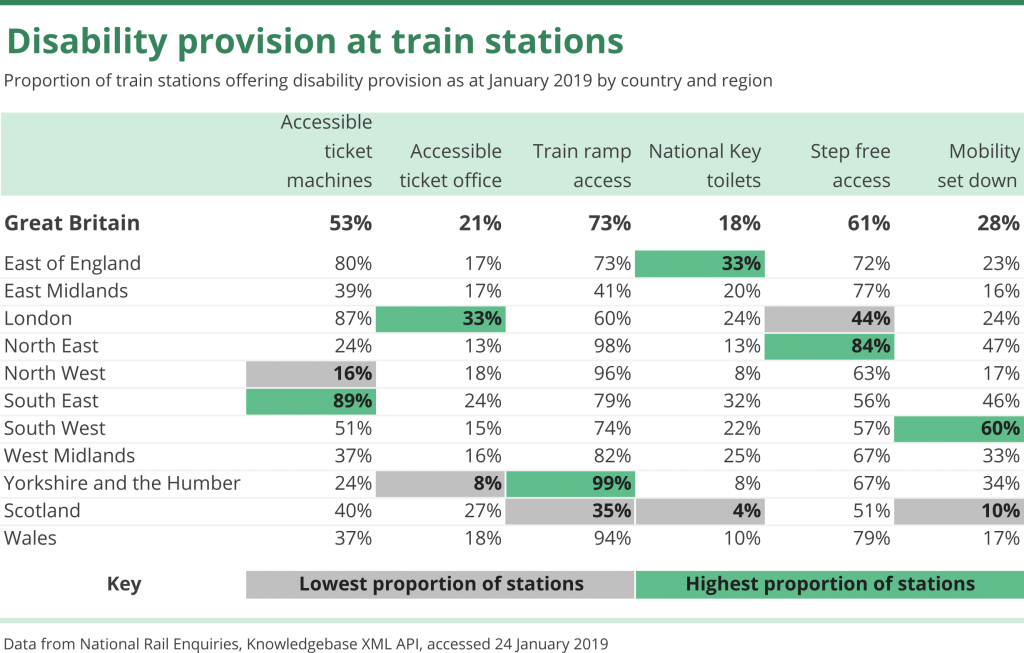 Using data from the National Rail Enquiries ‘Knowledgebase’ – a database of static information about the facilities at each of the 2,500+ stations on the network – the report, written by Noel Dempsey, highlighted that “just under half of [the] stations provide two or three types of accessibility and only 360 stations (14%) provide six or seven of the disability access identifiers” the HoC looked at.

Train ramps are generally quite extensive with three-quarters of the network providing access but only one-in-five stations has an accessible ticket office or disabled toilets. As pointed out by the Campaign for Level Boarding: “Most trains have floors at least 180mm higher than the standard platform, requiring manual boarding ramps. Coupled with non-standard platforms, ramped access can sometimes be dangerously steep.”

Another campaigner in the fight for level boarding is Katie Pennick. As Campaigns and Community Coordinator for Transport for All, Katie appeared on BBC and ITV News after documenting her travel difficulties on Twitter. “This is what disabled people have to deal with, every single day,” she said on the social media platform. “Fighting – and I mean fighting – just to get anywhere. I am exhausted. And quite frankly I’m sick of saying the same thing over and over.”

She continued the thread: “We need @LevelBoarding to be made a priority – now. No excuses. No delays. Accessible transport is a basic human right and is fundamental to an equitable society. This is not up for debate. #C4LB” 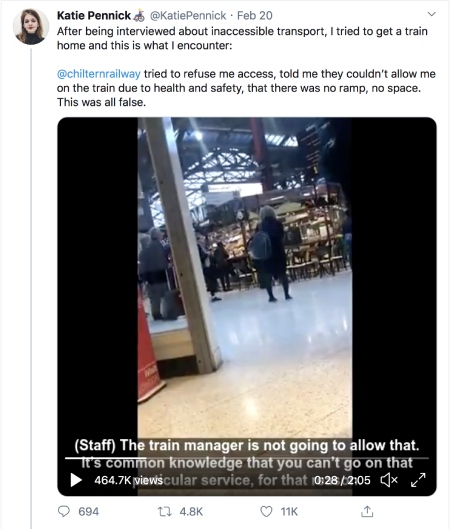 When asked why transport companies aren’t up to speed with catering for disabled people, Katie responded: “That’s a very good question and a huge one – a very complex question. I’m not sure what went wrong in this case.”

The train Katie had intended to travel on, Chiltern Railways’ 17:21 service from Marylebone, was apparently inaccessible for health and safety reasons; something she was told repeatedly by staff. “It just took me back to being a kid and not being allowed to do things,” she said. “I felt so patronised.”

Katie went on to explain that whilst the door to the train was quite narrow, it was actually wide enough for her particular wheelchair to board: “I think it’s about having that choice and having that information made available.”

In a statement about the incident, Chiltern Railways said: “We are committed to making our railways accessible to all and we apologise that Katie’s experience fell below standard. The train in question is the only one which has an inaccessible toilet and where the inside of the train is too narrow to accommodate some wheelchairs. We now advise of the constraints in the design of this train but offer the choice to use the service with staff assistance.”

But is this good enough? Rather appalled, Katie responded saying: “No! Why did it take me having to have three arguments with station staff, tweeting about it and going viral, and speaking to you on the news [for them to make this information available]?!”

The Campaign for Level Boarding (C4LB), established in late 2019, aims to address what they see as a “lack of ambition among the rail industry to achieve widespread level boarding across the UK rail network.”

An unofficial network of disabled rail users, railway engineers and other industry professionals, the campaign is “seeking to use their combined experience and knowledge to revolutionise rail travel and improve safety for everyone.”

Dr Jon Rey-Hastie, Chair of the C4LB said: “Level boarding means a safer, easier experience for everyone. It would allow me to travel independently without anxiety over whether I’ll be left on the train, and without the need to book ahead. I’ll finally be able to use trains like everyone else, which will be immensely liberating.”

It’s clear that the fight for accessible transport is far from over and that support is needed from both disabled and able-bodied people. To keep up to date and/or to register as a campaigner, visit the Transport for All and Campaign for Level Boarding websites. You can also listen and subscribe to Katie’s podcast How We Got Here via Transport for All’s website here.

Each week, Katie will interview a notable disabled person whilst they take a journey together on public transport. “Representing us in Parliament, serving as a staple of London’s punk nightlife scene, contributing to academia… We – disabled people – are here. Loudly and brilliantly existing in public spaces. This is what makes accessible transport so important.

“This is a podcast about movement, progression, and change. Stories about activism, protests, and chaining mobility aids to buses. Disability rights have come a long way in the UK, and we’ll learn just how far there is to go.”

Featured image courtesy of Transport for All.

By Yanchao Gao
1 Mins read
We meet the faces behind the bar as they share their views and experiences on bartending and cocktail culture from the experts.
EnvironmentVideo

Müll: The refill and recycling hub in London

By Carrington Saunders
1 Mins read
The piece is about a a refill and recycling hub in Brockley that has taken old and boring plastics into something new and exciting.
AudioMusic