“Thats my favourite piece,” 31-year-old artist, Harriet Horton, recalls: “I have it at home, it’s the only piece I have of mine.”

Bringing a second lease of life to creatures as unusual as the octopus, or the tiny, delicate prawn, Harriet has found herself extremely successful in her creative field.

Despite never attending a conventional art school and with a self-proclaimed “dislike for press”, she has created a name for herself, largely due to a unique self-taught approach to taxidermy work.

As an artist in residence for Saraband: The Lee Alexander McQueen foundation, Harriet’s work is sold in commissions across the world and has featured in numerous solo shows and collaborations.

With a unique emphasis on the use of neon light, Harriet’s work highlights colour palettes that provide a contrast from the traditional, natural environments taxidermy is often associated with.

A black and white magpie, beak positioned sharply downward and back neatly arched under a circular bar of neon green light. Two song thrush poised mid flight, claws curled above a neon strip of yellow, provide just a couple of examples of the use of light in full effect.

Following a recent Instagram post announcing her retirement from taxidermy and after opening up about an on going internal battle with the ethical side of the practice, Harriet reflects on where her journey began, nearly 10 years ago.

“I had a massive collection [of taxidermy], and then one day I sold it all and decided I hated it,” she explains. “Before that I had loved it so much and spent so much money on collecting it, so I thought why do I suddenly not like it anymore?”

After writing down all of the cons associated with the art form, Harriet challenged herself to start experimenting with creating taxidermy first hand, in an attempt to shake some of these negative elements.

“I wanted to get away from the trophy hunting element that taxidermy was associated with. It’s very disrespectful to the animal itself,” she explains. “It was such a historically bizarre industry, and obviously very negative.”

With animals from trophy hunts purposely killed with the intention of being placed upon display as a symbol of success from a hunt, Harriet’s work provides a perspective from the opposite end of the spectrum. 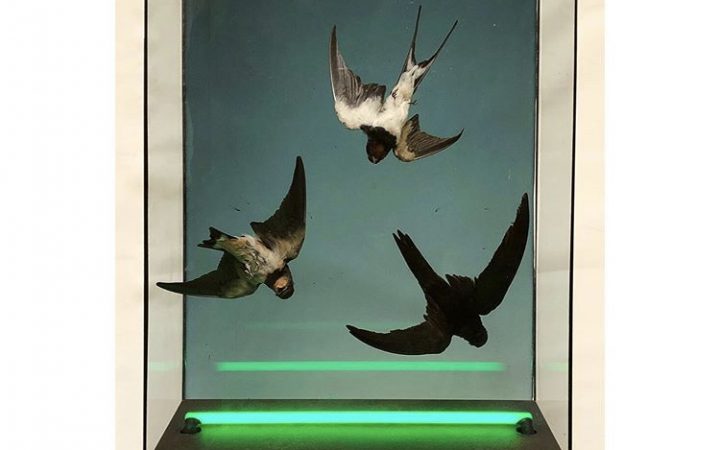 “My work is strictly ethical,” she continues: “Anything that comes my way I’ll use. In the UK, I use mostly small birds, they come from domestic cats or window casualties.” With the common magpie, song thrush, house sparrow and swallow just a few of the feathered subjects used in Harriet’s work, spectators of her art are encouraged to appreciate the slightly more common everyday animals, that are not often used to getting more than a second glance.

It seems Harriet’s ethical stance is not only limited to creatures that can fly, be it from sky or sea, her taxidermy extends beyond the traditional parameters.

“Prawns I just thought would be really funny to do,” Harriet explains, noting their menacing appearance, so often dishevelled on a dinner plate. “They’re also really sustainable, I keep the meat and it’s eaten in the kitchen, I’m pescatarian now but doing taxidermy actually made me go vegan for a long time. It’s dealing with meat and animals which really makes you think about meat and eating it.”

More often than not, the smaller the animal, the more complex and difficult the taxidermy process. The case for the delicate exoskeleton of a prawn is no different. Each of the back legs is carefully individually pulled off, then with a tiny syringe the prawn is emptied and its meat is removed.

After being injected with a paint and silicone mix, a metal rod is placed inside the prawn and the legs are fixed back into their original position. The antenna and front legs are crafted from sharpened metal steel, leaving them sculptural to look at, in a pointed samurai sword-like style. 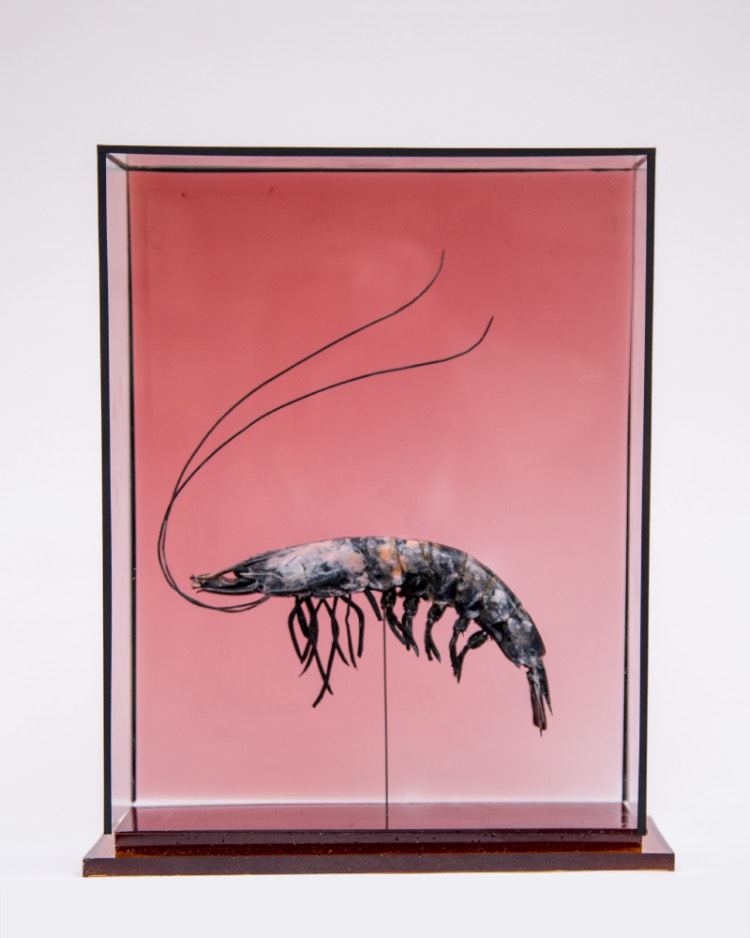 It’s a carefully conducted and painstakingly long process that often gets mistaken for a casting rather than the original product: “The biggest compliment to me is when somebody says ‘I don’t really like taxidermy but I like your work.’ That I quite like because then I feel like then I’ve gone out and done what I had originally wanted to achieve,” Harriet states.

Despite achieving this positive recognition from so many, and dissecting and breaking away from the stereotypes associated with traditional taxidermy, the niggling doubt about the negative implications of the practice never fully went away for Harriet.

The 2018 creation of a crystallised octopus, sourced as an out-of-date food product, provided an opportunity to reflect about the ethics of the practice itself. “The octopus is obviously such an intelligent creature, but I still think you should treat every animal the same,” Harriet tells us. “I think you have a responsibility and I didn’t want to make it [the taxidermy of Octopi] more popular because I didn’t want to encourage them as a piece. It just felt wrong and is one of the millions of reasons why I am stopping.

“Even though my work is strictly ethical, it’s still dead animals and although I only use ones that have died naturally, the planet is under such threat, I cant ignore the heavy weight of such a macabre practice. It just doesn’t sit well with me anymore.”

After a growing ache for change more ever present in the last two years, 2020 marks the year where Harriet’s taxidermy chapter will come to a close in order for a new, and currently unannounced, artistic venture to begin.

After acknowledging the the constant pressure within the artistic world to have a specific theme or style in order to be consistent, it’s hardly surprising that changing art form, particularly once being labelled as a “taxidermist” rather than an ‘artist’ or ‘maker’, may be difficult.

“Stopping is not me proving a point because I genuinely wanted to park taxidermy to move onto other interests that I have been studying on and off for the last year.” Harriet explains.

“I’m quite tempted to start my new work under an alias, just for fun. I’m not really worried about changing my audience, I think my new work will actually have a lot of interest from the same people.” 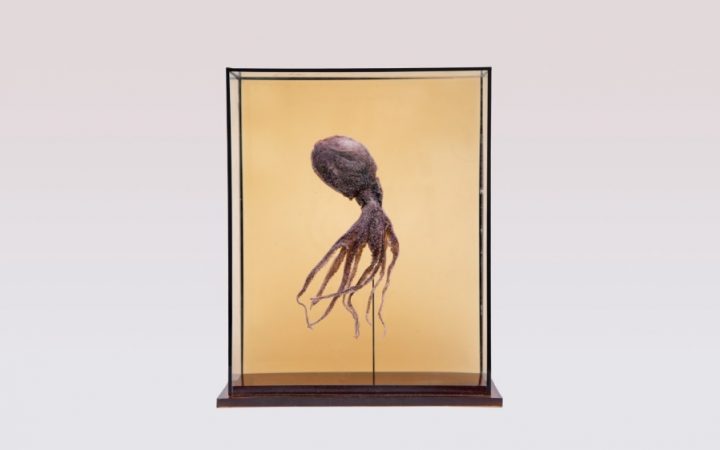 Despite the new beginnings, there may be one very last taxidermy pursuit in store for Harriet’s future. With a nod to the seaside surroundings she now calls home, one more particularly slimy and boneless venture could potentially be just within reach.

“One thing I have actually always wanted to do is a jellyfish,” Harriet explains. Despite meetings with the Natural History Museum and a couple of trial tests, this dream is yet to be perfected. “I have always said that if I do a jellyfish I won’t do anything else with taxidermy, that would be the pinnacle. I mean, it’s 99% water and almost impossible to do.”

With time now devoted to studying for future work to come and spending time with family, she pays homage to the sea, a romantic element to be living around during a transitional period.

Perhaps this surrounding will give one last inspirational push to complete this final journey and inspire many future artistic pursuits away from taxidermy.