Ana Pallares begins every painting with a quote.

First comes the idea, a feeling or thought – perhaps she will lock eyes with a stranger in the street for a moment, or be hit with emotion while sitting on the beach. Then comes the quote, she puts it to words. Finally, Ana conceptualises the image and begins drawing.

“I try to materialise and put out my feelings and thoughts so I can see them properly and model them,” she explains: “So I’ll get the feeling in my head but I can play with it on the canvas and make it my own somehow.

“I select a character in terms of what I feel in the moment, for the initial sketch that is.” Pallares, is by any stretch, a precocious young talent. At just 26, she has widely exhibited in both solo shows and residencies across London and her home country Spain to great acclaim. This month has seen her fourth independent exhibition at the Hundred Years Gallery in Hackney. 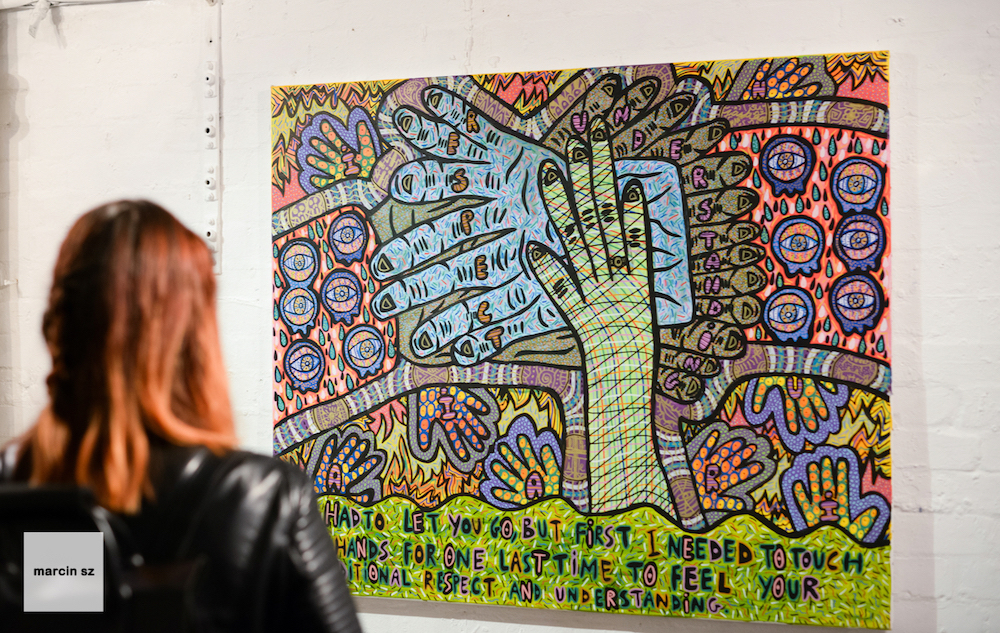 Colour, text and pattern are combined for effect [Marcin Sz]

We meet on a chilly Sunday morning at the small and charming space where Pallares perches on a large sofa by the window. Surrounding her are her paintings, covering the adjacent walls.

Her work is visceral, loud, in your face and exploding with raw emotion. The paintings have a restless energy about them – bright acrylic faces and figures seem to literally burst off the canvas and call to the viewer. Often shocking, often funny, these paintings confront such themes as pain, love, sex and death unflinchingly.

“The drawing is very spontaneous but the details are not,” Ana says, pointing to a large canvas work. “The details are very organised. It might seem confusing sometimes but they are there for a reason. So if I choose blue and orange, the other has to be yellow and purple.”

She motions to two adjacent skulls on the canvas behind her and tells us: “the process is actually quite mathematical.”

With each narrative of worry, sadness or even terror however is an undercurrent of humour. A ‘tragic humour’, as she puts it, that provides, even in the darkest moments, and edge of self-deprecation. Colour too bursts from each canvas, an almost paradoxical element to the often heavy subject matter.

“I’ve always been attracted to colour, I can’t explain it. It’s just natural to me. It’s the same reason there’s little space on the canvas. You see I am painting to be a mirror of my mind and mind is full of thoughts  Everyone I guess but I don’t think there’s a lot of space in my mind. So consciously or subconsciously I cannot leave a lot of space.” 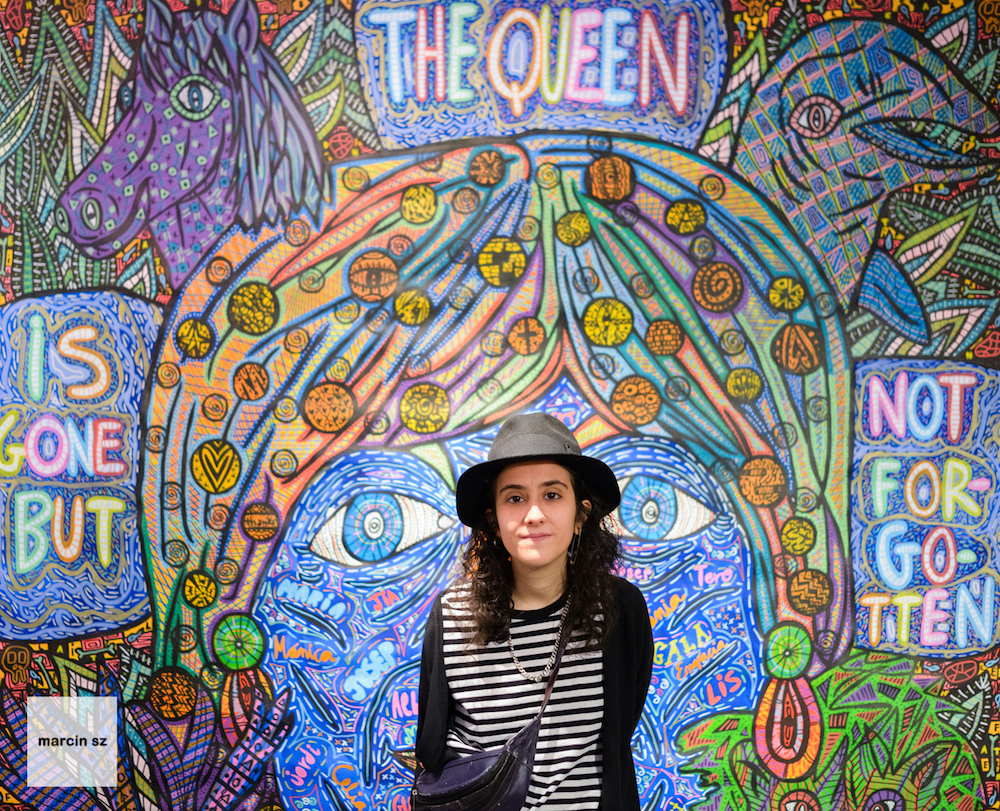 Pallares, who hails from Barcelona admits she has been drawing her whole life. As a child, she cut figures out of magazines, creating characters and comic stories for them. An interest in painting however began as a teenager while studying the history of art during school. This coincided with a difficult period of her life, but through her artistic flair she found a safe space.

“For so many years of my life, I felt so isolated. I had friends and a supportive family, I’m very lucky. But isolation is not always in terms of being alone,” she says.

“You can be surrounded by people and still feel alone. I felt super misunderstood, and it led to me to a state where I needed to connect with reality or connect with others. I think through art is my way of doing it. I’m so happy when others can connect with the feelings in my paintings, that’s the point.” 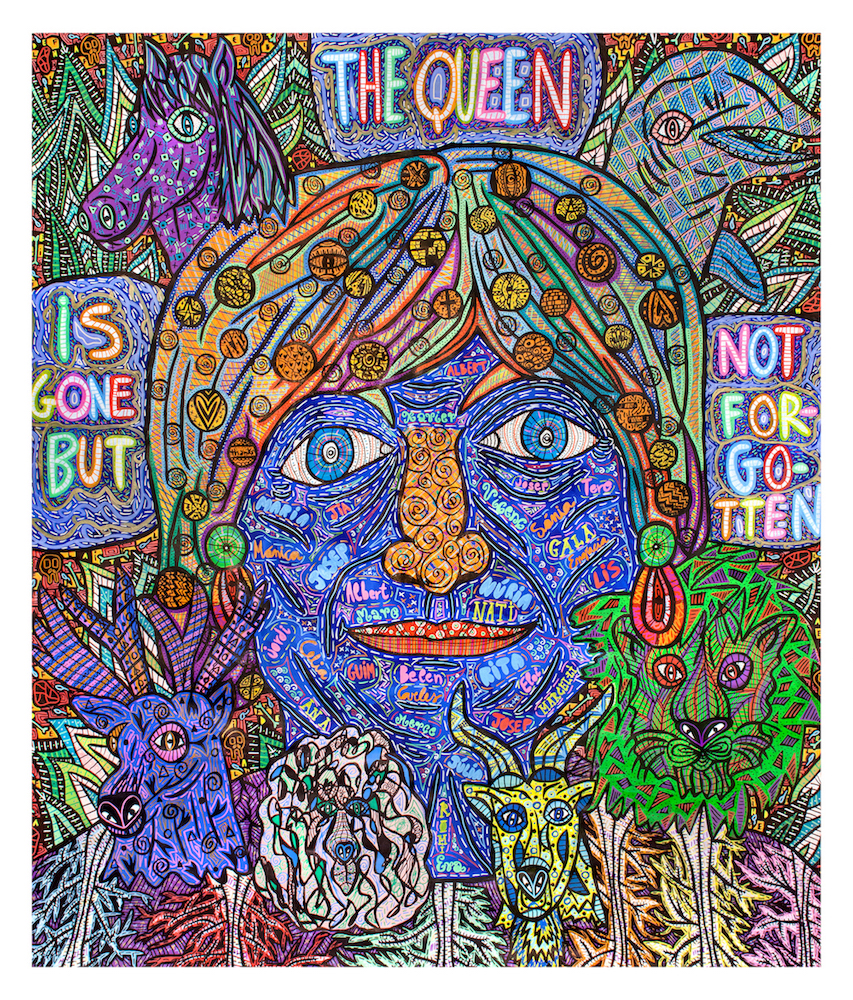 The artist’s earliest inspirations were rockstars and later painters like Basquiat, who Pallares found allies in. “I see a lot of honesty in their work. I like to see the heart of the artist or their passion. There are some contemporary artists where I look at their work, and I feel so empty.

“Kurt Cobain, for instance, he was so full of life and rage, and he had so many brave things to say – he was not scared, and Basquiat too. Every time I see one of his paintings, I feel the energy,” she smiles.

Montse Gallego, director of the Hundred Years Gallery and Pallares’s representative in London, saw the young artist’s talents from the beginning. “Almost everyone feels stopped by her work; there is no person who passes by with indifference. In that way we can say she not only has potential as someone who makes art but as something that touches our subconscious,” he said.

Eternal Life: the thin line between life and death’ is certainly the artist’s most personal set of work to date. Its central theme of death was inspired by her grandma’s recent passing and the journey of self-discovery that resulted. The two were incredibly close, and Pallares’ grandmother acted as a confidante in times of need.

“In my past, I’ve seen death all around. I worry a lot that the people in my life, something’s going to happen to them. What I’ve learnt through the death of my granny is that there is something positive about it. The thing is without death, there is no life.

“There was an occasion where I was so sad over the death of my granny, but I was thankful I was able to spend these moments with her and her knowledge. You can cry – I did cry, but I thought, let’s make something beautiful out of this, let’s celebrate this person who we were so lucky to have in our lives.”

The progression of not only Pallares’ skill but her emotional realisation is apparent. The top floor of the gallery, which houses her previous work, presents some jarring imagery. Burial of my Youth, painted in 2013, shows the artist’s imagined own burial scene, her parents at her side. 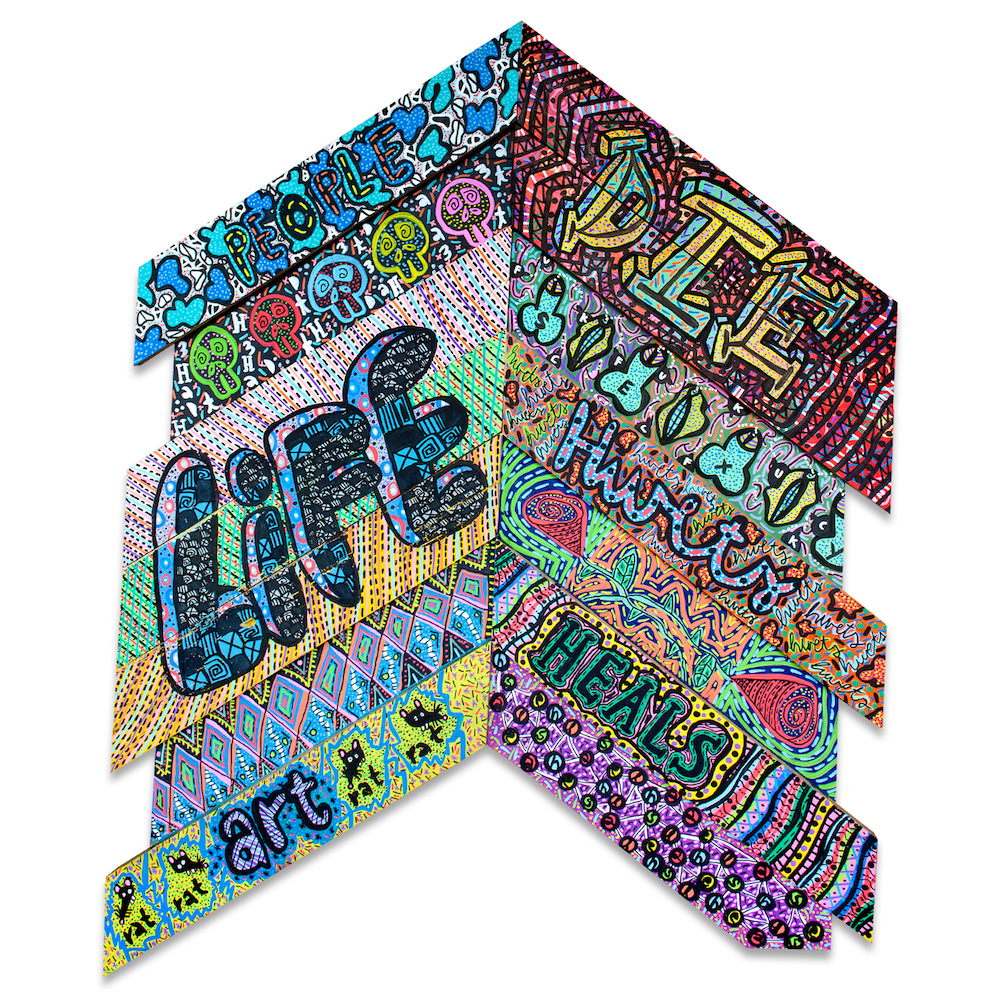 “In burial, for instance, there was youth, and maybe it was crazier,” Pallares explains. “The ones I’m doing now, I think are more mature. I’m more aware of what I want to say and how to say it,” she continues.

In the gallery’s basement level stands Pallares’s most recent works, which embrace the natural process of death with maturity and confidence.

A large painting reads ‘THE QUEEN IS GONE BUT NOT FORGOTTEN’ in a gorgeously psychedelic piece which features exhaustive details of words and print that go to form a woman’s face and presents a message of hope.

Pallares nods, in the last year, she has strived to make beauty out of hardship. “I know in the future, sometimes it will be good, and sometime it will be bad, but art will be there for me.

“I want to take my destruction and make something productive out of it. You still have to struggle with this, but you are smarter, somehow creating this art out of it in the battle.

“Your demons use you and put you in bed, but you can use them somehow and win the fight with them.”

All images courtesy of Marcin Sz, with special thanks to Montse Gallego at the Hundred Years Gallery .