The American phenomenon Glossier, a make-up brand that has won the hearts of millions of millennial girls all around the world, has gained a great reputation in the last few years. Now, the brand has opened a pop-up store in Covent Garden, their first store in Europe, which has attracted thousands of customers.

Glossier was founded by Emily Weiss, who created the brand for young women who do not have hours to do their make-up and need quick and easy products. Recent trends show that women with a busy schedule ideally want to do minimal make-up but still want to look and feel beautiful.

The brand aims to create skincare products that help maintain glowing, healthy-looking skin, so not a lot of coverage is needed. Emily wanted to minimise the time women spend in front of the mirror every day, and so invented products that help women and young girls enhance their natural beauty, rather than covering it with heavy make-up. 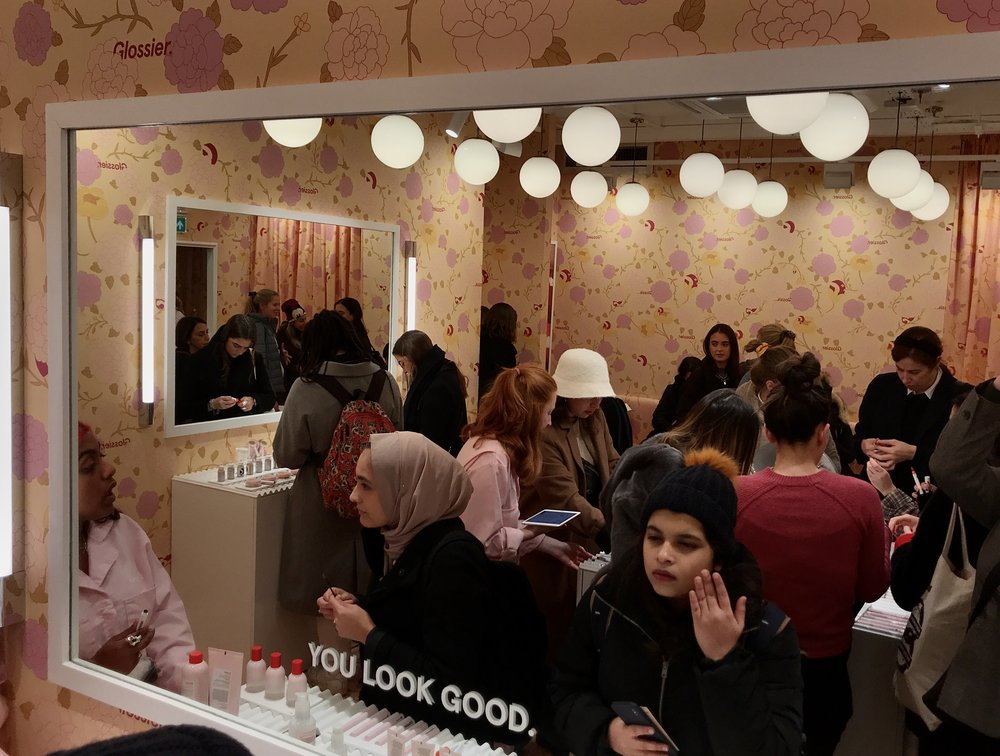 This does not mean that Glossier does not offer shimmers and colours – the brand recently launched ‘Glossier Play’, which has introduced a different variety of colourful eyeliners and shimmery eyeshadows. Nevertheless, according to Glossier’s motto: “skin first, makeup second, smile always.”

Before Emily started Glossier in 2014, she created the blog Into The Gloss. In only a few years, her blog has become one of the most influential cosmetics blogs, visited monthly by millions of readers.

Hundreds of tested products and countless conversations with women from around the world have given Emily inspiration and courage to pursue her own business. By the time she started working on Glossier, she already had a crowd of dedicated fans that trusted her opinions and followed her advice. 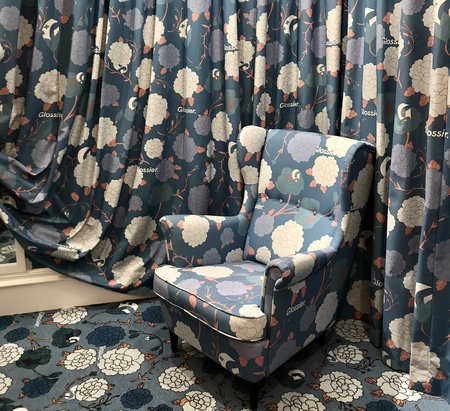 From the beginning, the idea for the brand was very clear – newly defining female beauty, relevant in the era of Photoshop and Instagram filters and developing cosmetics formulas that will bring out the real, natural beauty with minimum effort. And finally, designing products that each of us will want to keep in the most visible place in the cabinet so that we can reach for them at any time.

Glossier’s brand image and aesthetic is unique and presents something that has hardly every been done before – natural models, with imperfect skin, minimalistic make-up, glossy, dewy faces and rosy cheeks.

Glossier positions itself as the cool brand with iconic products that are fashionable to have in your make-up bag.

When asked about the purpose of Glossier, Emily said that although there are a lot of good cosmetic brands, she wanted to create one that people would love so much, they would want to buy every single item and even wear a T-shirt carrying the company’s logo. Glossier has become not just a company selling cosmetics, but a lifestyle. 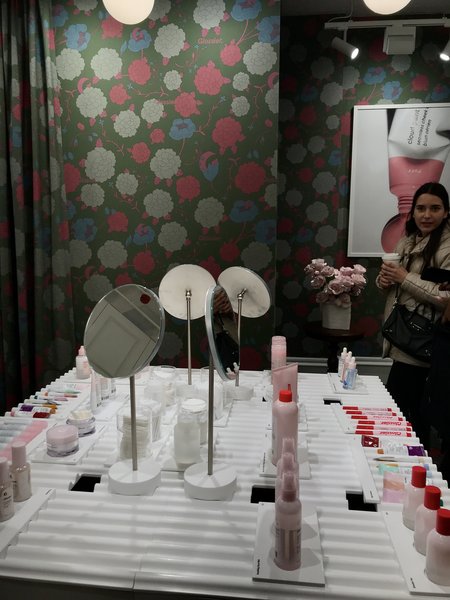 That includes the development of packaging that is just as important as the product itself. The company focuses on Instagram-worthy designs, because they understand the importance of the way a product looks in pictures, for many customers.

Additionally, great social media management is a big part of Glossier’s success. They post tutorials, tips, products, reviews and even comedic memes connected to their brand. The idea of making an Instagram account the main form of communication with customers came from observing potential customers. Emily admits that she took inspiration from watching her friends browse through Instagram at least four times a day.

Instagram was found to be the social media platform that the brands’ client demographic (women aged 18-34) use the most. This is where the brand adds content, engages users, launches promotions and events – but above all, builds a unique place for Glossier lovers to connect.

Twitter is another important social media platform for Glossier, it is where discussions about products takes place and where customers are most likely to share their opinions about cosmetics, customer service and other thoughts on the brand. Glossier also knows how to use Twitter well – they reply to most users and interact with them every day.

The brand quickly became a sensation all around the world, with its unconventional approach to consumers and products. Glossier is growing and expanding more every year, not only in America. 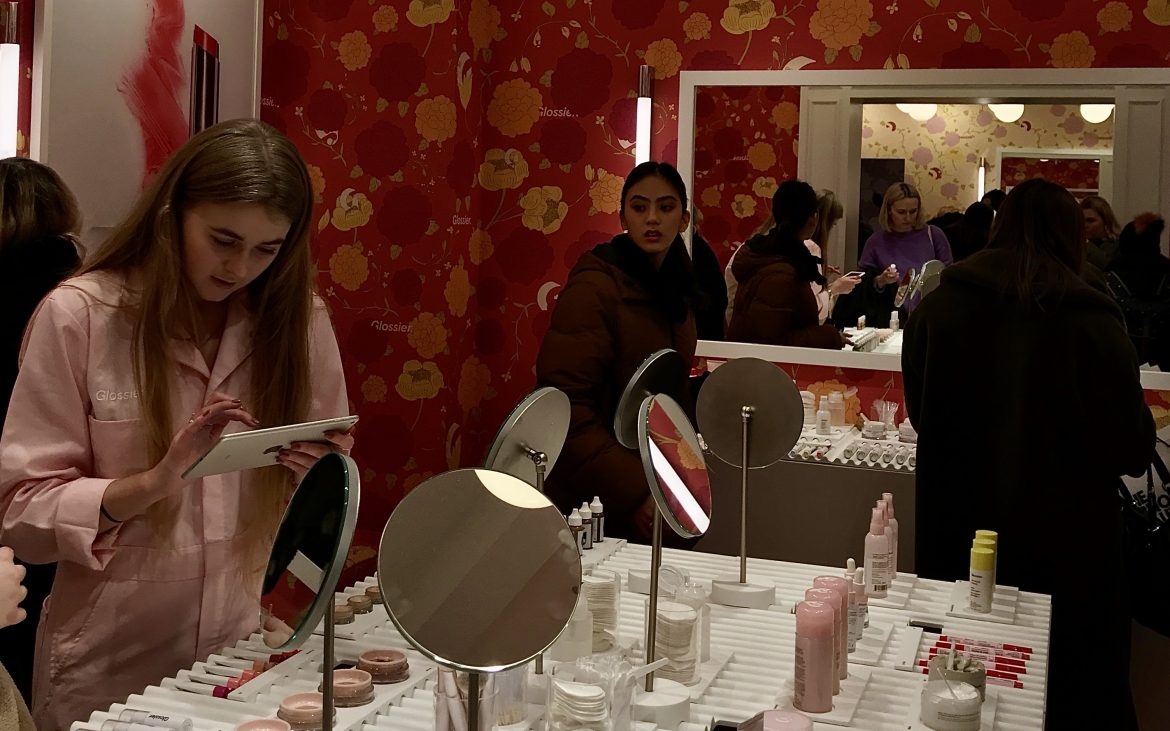 At the moment, the brand’s permanent stores are found in New York City and Los Angeles, but recently Glossier has been opening pop-up shops in few other places across the world. Londoners were pleasantly surprised when the London pop-up opened on Floral Street.

The location of the pop-up was not chosen randomly; the entire interior of the store is filled with floral wallpaper that blends in perfectly with the other pastel elements of the interior design.

Glossier is well known for surprising customers with unique and unconventional ideas for their stores. Every element of the display is carefully thought through, so customers do not feel that they are doing “casual” shopping, but rather are experiencing a fun adventure in the world of Glossier’s makeup.

On Instagram Emily said: “When we meet to discuss a new city, I often say ‘What can we do to blow people’s minds?’ If the creative team is not smiling or laughing at the ideas they come up, we know we haven’t pushed enough yet.”

Glossier London opened on a Wednesday at 10am. Emily described it as “a Mary Poppins-Willy Wonka-British social club mash-up. It is London through Glossier-coloured glasses and a brilliant way to experience our products.” 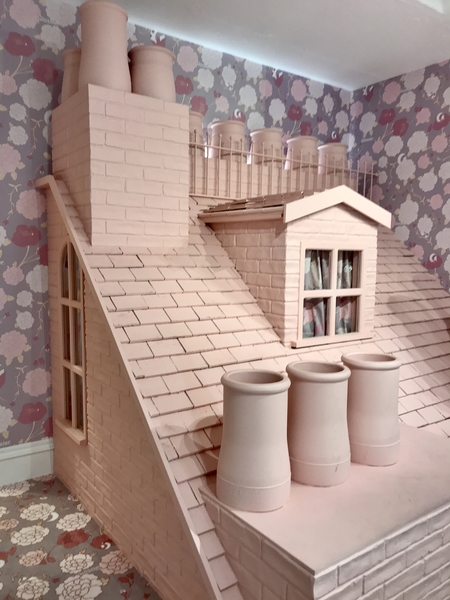 The team that worked on London’s pop-up design created all other stores around the world and manages Glossier’s online image. Knowing the brand’s community, the designers made sure that all the elements of the store are unique and work together.

Glossier London drew inspiration from traditional English interior designs. The pattern of peonies and poppies appear on armchairs, curtains, carpets, sofas and each room has a different theme and colour.

A pink installation ‘Glossier Rooftop’ can be found at the very end of the store and is a tribute to old London architecture.

On opening day, the store was extremely busy, and everyone seemed to be enthusiastic and excited. One of the sales assistants in the store claimed that London’s pop-up earned more on the first day than when the original stores opened in Austin and Los Angeles, all together.

Visiting Glossier’s colourful London store can be an inspiring and Instagram-worthy adventure for everyone who is interested in what the team came up with this time.

The Glossier pop-up store in London will be open until February 9, 2020.