Neatly ordered, brightly coloured breasts of every size and shade line the wall, a stark contrast to the creative disorder normally found in an artist’s studio.

A sea of areola displayed like paintings, metallic looking blues, silvers and bright reds against the white paint. Amongst these and carefully stacked in piles, delicately craft casts of vulvas positioned, pride of place, upon a shelf. These body parts, so often ingrained to be hidden discretely beneath clothes, now hung unapologetically on display for all to see.

This is the workspace of 28 year-old full time artist Lydia Reeves, who is based just outside of Brighton, and who has just returned from working in Australia, where she spent the last week casting 20 women’s vulvas and five women’s breasts. Best known for her intimate approach at the casting of vulvas, this body positive journey began over 15 years ago, inspired by her own personal experience.

“I basically just grew up with severe anxieties and insecurities surrounding my own vulva from the age of 12,” Lydia explains. “I went for surgery consultations [for a labiaplasty] and stuff as soon as I turned 18, it really shaped my teenage years.”

After finding her parents were unable to lend her the £3,000 procedure fee, Lydia eventually saved up the money herself: “By the time I had saved all the money I couldn’t bring myself to get the surgery. I had just started doing fine art at uni and did a few vulva projects,” she says. “Also Instagram had got big and I started following vulva positive accounts and realised, ‘Fuck! I’m not the only person ever who has grown up with insecurities’.”

Labiaplasty is not always a surgery conducted for cosmetic reasons, but the recent growth in the number of procedures, 45% year-on-year, suggests that whether it be it for aesthetics or not, the altering of skin around the vulva is considered by many plastic surgeons as the ‘World’s the fastest-growing cosmetic procedure.’ 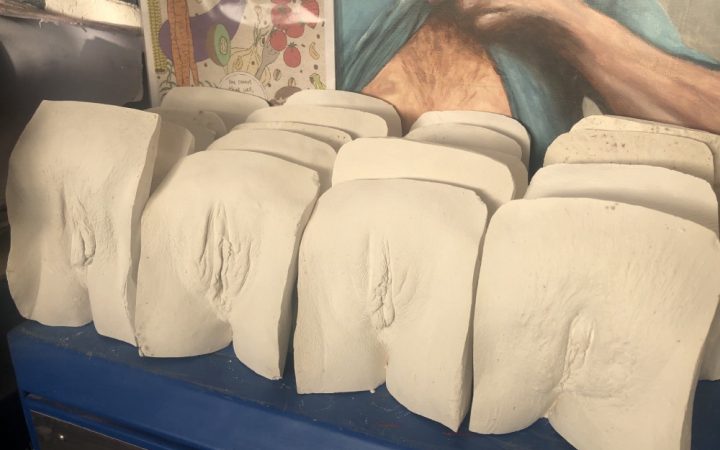 After speaking with close friends six months ago, Lydia decided to begin a ‘vulva diversity project’ on Instagram, documenting it to her 10,000+ followers in an attempt to highlight the diversity within the world of womanhood. An approach that involves photographing the vulva cast, followed by a section of hones but anonymous text describing the relationship each person shares with their vulva.

“The more I spoke with my friends and the people I have cast, the more I realised that everyone has a story,” she explains. “Whether it’s negative or positive, it’s a story about your vulva, your vagina, your pubes, or even sexual abuse. People’s stories have made me realise that this has to be a good thing that I’m doing, I want to help as many people as possible to not feel how I felt basically.”

Each vulva cast is photographed stood upright, sculpture-style and placed in front of a paint-splattered pink backdrop. The clean white of the alginate mould capturing every single bump, curve and shape to near perfect accuracy, every one unique and different.

“I feel so special that people trust me enough to open up to me so much,” Lydia explains. “Sometimes people come in and sit down and they’re like ‘what I’m about to say I have never said to anyone in my entire life before’. It’s kinda like a therapy session for a lot of people.”

For many, the casting process, which takes less than 10 minutes, is a cathartic one. Addressing any insecurities and anxieties through a creative outlet with the reward of a physical end product.

Those partaking in the Vulva Diversity Project itself are volunteers, often making contact via Instagram. “I also get a lot of people who want the casts just for themselves, and that you have to pay for,” Lydia says. “Full price for someone not volunteering is £150, but actually every single person I have ever cast has also volunteered and with that, I offer 50% off.”

Breast casting is slightly more expensive she explains, at the price of £280. The process requires standing completely still, arms raised above the head for half an hour; not including the time taken for the sanding, trimming, and painting of the finished product, which is carefully conducted by Lydia in the studio in the days after the participant has left. 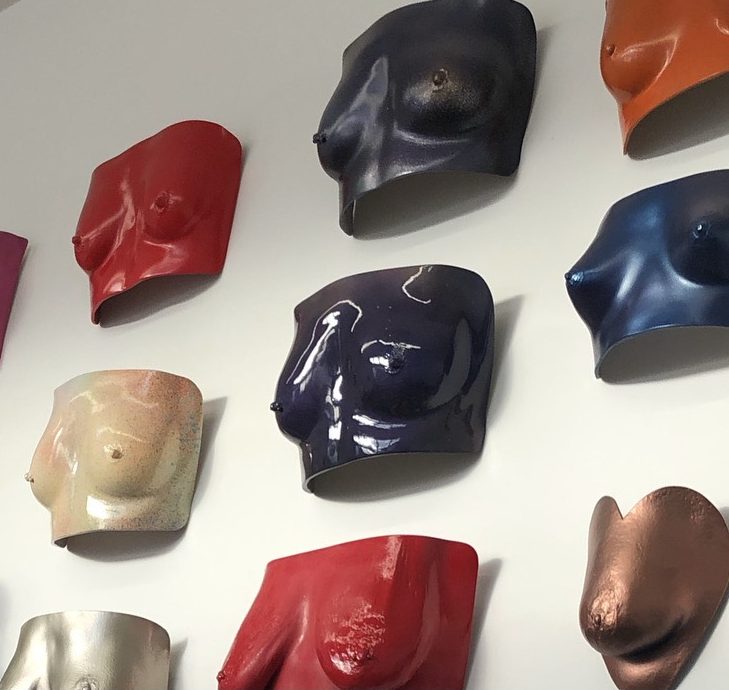 Casts of breasts created and hung in the workspace of Lydia Reeves. [Anežka Turek]

One reoccurring theme shared within the stories of many participants of the Vulva Diversity Project is the damaging effects of pornography. Some openly reference memories of feeling insecure after watching videos depicting an idealised ‘designer vagina’. For this reason, many women turn to this casting experience as a way of putting a middle finger up to the inaccurate standards set by pornography. The finished product van be used as a positive example to highlight that there is no such thing as a ‘wrong looking’ vulva.

This is a view shared by Jo, founder of This is a Vulva on Instagram. The page started around four years ago was created with the intention of normalising and educating about the variety of vulvas, and which now has nearly 40,000 followers.

“This vulva exists. But it’s not the only vulva, by a long, long way,” she continues. “We’re missing vulvas of colour, vulvas with pubic hair, labias of different lengths, colours and textures, clitoral hoods that are longer and larger [and] vulvas with scars from childbirth. All these variations are normal and healthy and nothing to be ashamed of. But if we never see it, we think it’s wrong. And if we think it’s wrong, we want to ‘fix’ it.”

To support this, Jo refers to research which shockingly show that 65% of women aged 16-25 are too embarrassed to use the word vagina with their doctor, and that screenings for smear tests are at a 21-year low. It’s been suggested that this is due to embarrassment or fear of ‘not looking right’. This in many ways proves that the diversity of vulvas featured in Lydia’s art holds a crucially important message. 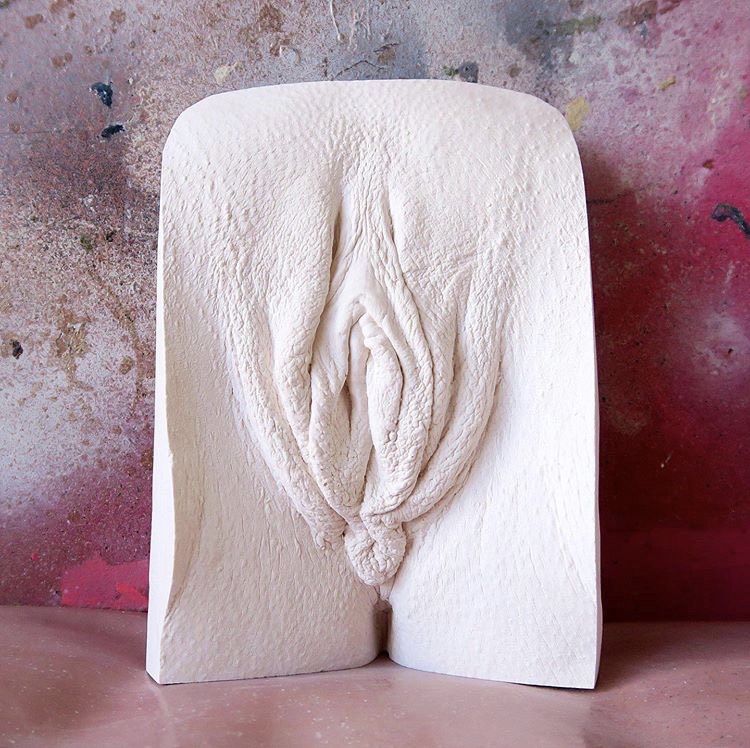 Despite this stigma still surrounding women’s sexual and reproductive health, Lydia is yet to face any particularly negative reaction to her work. “99% of the time reactions have been positive or just ‘oh, okay’,” she says. “Sometimes I get stupid comments from predominantly teenage boys saying stuff like, ‘Oh do you ever get a vulva you look at and think “eww, that’s disgusting!”?’ And it’s like, you are the reason I am doing this project in the first place!”

As for 2020, plans currently in the making include an exhibition set for summer in London and the creation of a coffee table-style book, filled with images of the vulva casts and their stories.

As well as all of this, Lydia’s main aim for the future is to bring the casts into schools to be used as an educational tool for young people. “I know for a fact that if my 15 year-old self had seen these casts, I would have probably been way too shy to ask any questions, but I would have come home and breathed a huge sigh of relief,” Lydia says. “I think it would be hilarious and the class would all giggle but at the end of the day I don’t care, as long as they come away from it knowing that there are different types of vulvas and that’s fine. That’s a huge thing I want to do for 2020.”

With Lydia’s work creating a lasting impression, both physically in the casts and on the lives of young women everywhere, her success is well deserved.