Culture and the night cannot be pulled apart. When the sun goes down, cities the world over become hotbeds of entertainment and expression, their nightlife both an inspiration of, and venue for, creative minds in art, design, fashion, film and music.

In more recent times, Ben Kelly’s visionary interiors for Manchester’s legendary Haçienda nightclub have been widely celebrated, as far as a faithful recreation at the Victoria & Albert museum in 2012. The lasting legacy of the venue’s post-industrial styling can still be seen in the aesthetics of the UK’s music scenes today. 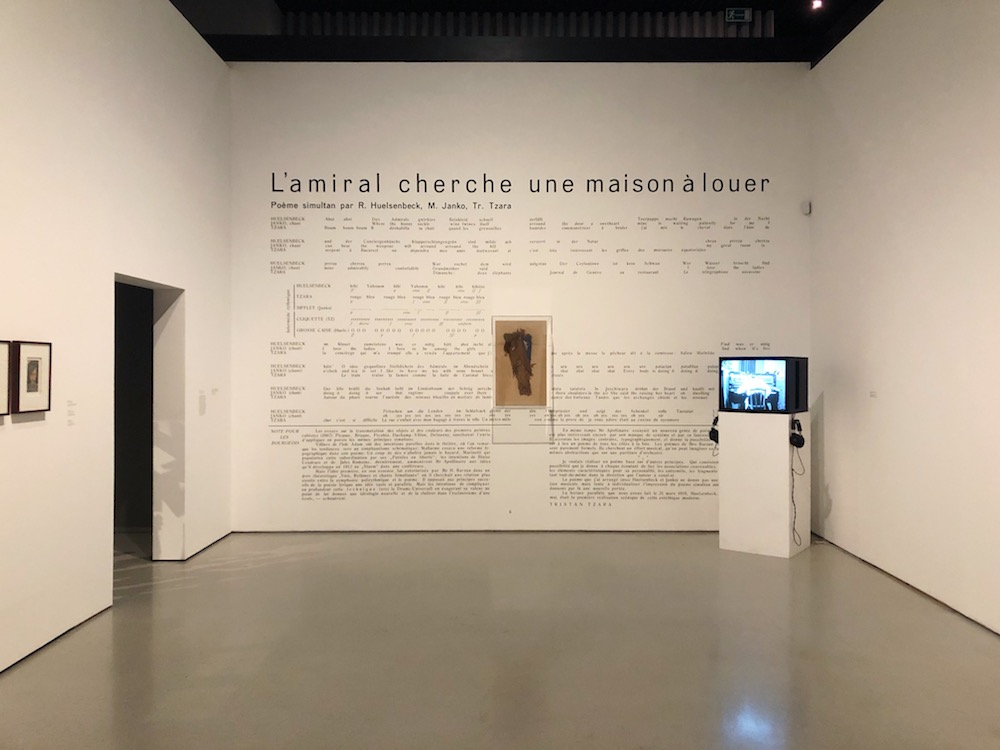 An installation celebrating the Cabaret Voltaire in Zurich, birthplace of the Dada movement [Oliver Jameson]

Places of this kind were arguably at their most influential during the period of modern art, when experimentation and a rejection of past values became the new tradition.

This is the focus for Into the Night: Cabarets and Clubs in Modern Art, an exhibition which seeks to illustrate the important role played by these nightlife hotspots in international art and culture throughout this era.

The social spaces featured at the Barbican Art Gallery are more than your average watering holes. The exhibition is a world tour of venues of artistic and cultural significance; lively hubs inhabited by thinkers, artists, creators and revolutionaries. 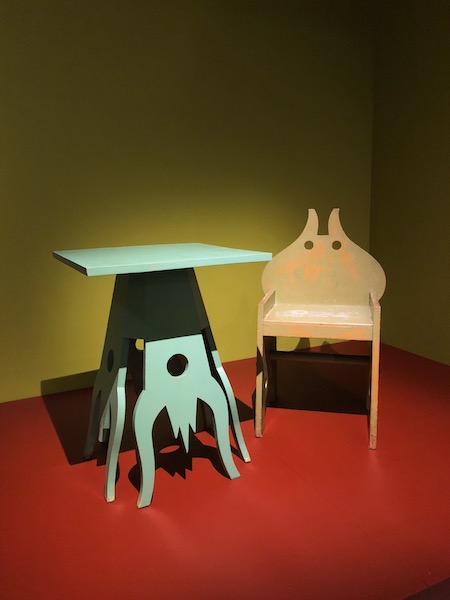 The stories of these places and the time periods in which they existed are told through an eclectic selection of works, including paintings, posters, furniture, props from performances, photography, film and print material from the 1880s to the 1960s. It all comes together to capture not only the artistic impact of these locations, but give a sense of the kind of people who frequented them.

There’s an electric quality to some of the venues on show. These were the places where the tremors of societal change began, backdrops to the creation and exploration of new ideas. Within their walls, free expression was the norm. Philosophy, identity, gender, sexuality, politics; all were challenged, discussed and responded to.

Take Mexico City’s Café de Nadie (Nobody’s Café), a gathering place for proponents of the avant-garde where artists and poets responded to a post-revolutionary shift. More than a place to meet and drink, here exhibitions were held and manifestos created, a defiance of conservatism under the Estridentismo (stridentist) movement spearheaded.

L’Aubette in Strasbourg, a modernist remark on the dancehall. Bold geometry and colour intermingle, the forward-thinking architecture disorienting and mesmerising all at once. The ideals on display in its design, once radical, are now respected the world over.

Rasht 29, a private home for the visionaries of Iranian art, film and literature at the end of the 1960s. Tradition and new visual ideas come together with modernist and pop art painting and sculpture. Drawing on historic Persian identity and artistic techniques. A valuable inclusion to the exhibition that does well to address the influence of creative spaces beyond the recognised venues of central Europe; this is a particularly timely display of a part of the country’s rich artistic and intellectual history with works rarely displayed in the UK.

Perhaps, without these places of then wild expression that defied societal norms, the artistic freedoms we enjoy today would never have come about. Ranging from renown to undiscovered, Into the Night does well to champion the importance of these spaces. 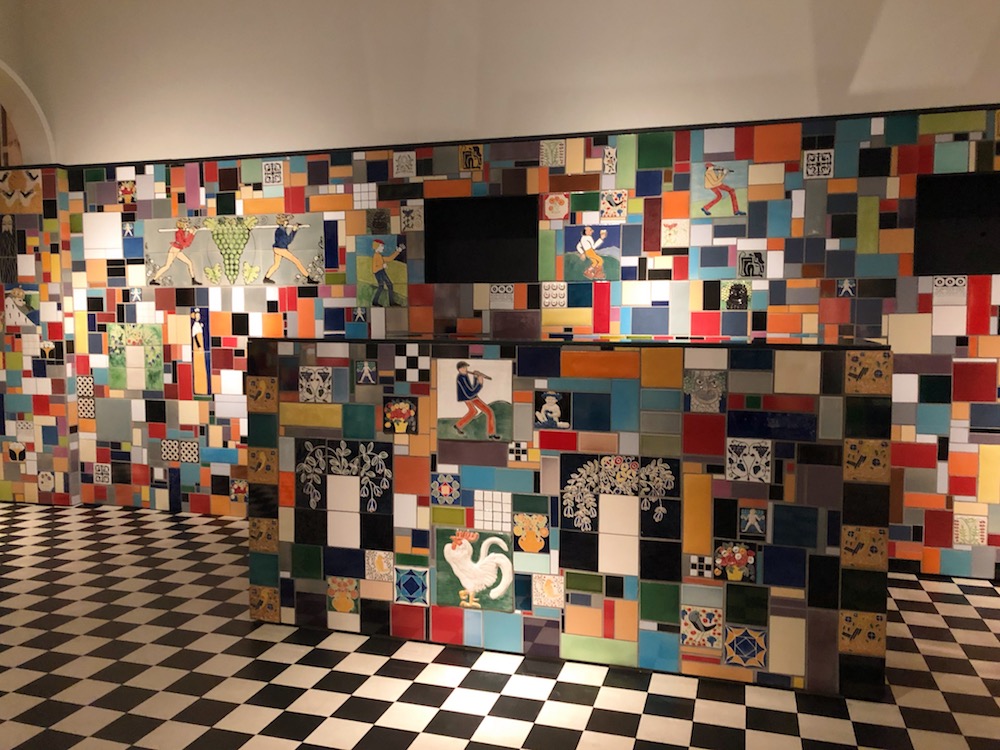 A faithful recreation of the bar at the short-lived Cabaret Fledermaus in Vienna. In the original club which opened in 1907, great attention was taken to details as small as the ashtrays and stationery [Oliver Jameson]

Several historic locations have been ‘recreated’ in part on the exhibition’s ground floor. Reconstructed carvings from the Mbari clubs, open-air centres of 60s Nigerian modernism, play with shadow in an energetic manner, whereas the joyful tiled motifs found in Vienna’s Cabaret Fledermaus are brought to life in intricate detail.

From Thursday through to Saturday, evening visitors are treated to an even more authentic experience; live jazz and drinks served from the replica Fledermaus bar, opened in 1907 for the Wiener Werkstätte modern design cooperative as a counter to “the boredom of contemporary life.”

These live events do well to contribute to a sense of immersion otherwise missing from the dioramas.  After all, it’s impossible to resurrect the bustle of performance and ideas being exchanged that would have once filled these venues, actively linked to the moment in their history at which they were open. As such, when you choose to attend is imperative to experiencing the social nature intrinsic to these spaces.

Into the Night: Cabarets and Clubs in Modern Art is on show at the Barbican Art Gallery until January 19, 2020.
The Cabaret Fledermaus replica bar is open Thursday, Friday and Saturday from 6:00pm to 9:00pm.

Are we headed for an anti-Boris 'free party' era?

By Alice Marshall
7 Mins read
Many people are still deeply passionate about the Free Party ‘movement’, but how has Covid affected the way they think, and are we headed for a “rave renaissance”?
Lifestyle

By Anezka Turek
7 Mins read
In London 151 LGBTQI+ venues have shut down in the last 16 years. Is the U-haul theory to blame or is it just another toxic stereotype?