Crammed onto overcrowded vehicles, grasping for air, traveling thousands of kilometres to face a brutal slaughtering at their arrival – that is the reality of the animals that are transported every day to satisfy the demand of the meat industry.

The global trade in live farm animals has quadrupled over the past 50 years and currently almost two billion animals are loaded onto trucks and ships to be sent to countries around the world daily, according to The Guardian, exposing them to extreme exhaustion, dehydration, pain and stress.

The transportation of live animals first gained media attention in the UK, after an aeroplane carrying cattle in an unpressurised aircraft was caught arriving at Baginton airport in 1994, while another was used at Humberside Airport for Ministry of Agriculture tests. This led to a series of protests throughout the country; usually at smaller airports such as Baginton and Southend, which were being used to transport livestock in hopes of going unnoticed.

Activist Jill Phipps, who died throwing herself under the wheels of a veal transporter at one such protest, at Coventry airport, remains a symbol for animal rights advocates to this day, having been hit by a lorry while demonstrating to put an end to the live transport of animals.

One would expect that these events would have a detrimental effect on the future of live animal export and import, but 26 years onwards, the conditions are arguably worse than ever. Recent reports show that rough handling, inappropriate vehicles, overcrowding, high temperatures and failures to feed and water, are common circumstances under which transport is conducted. 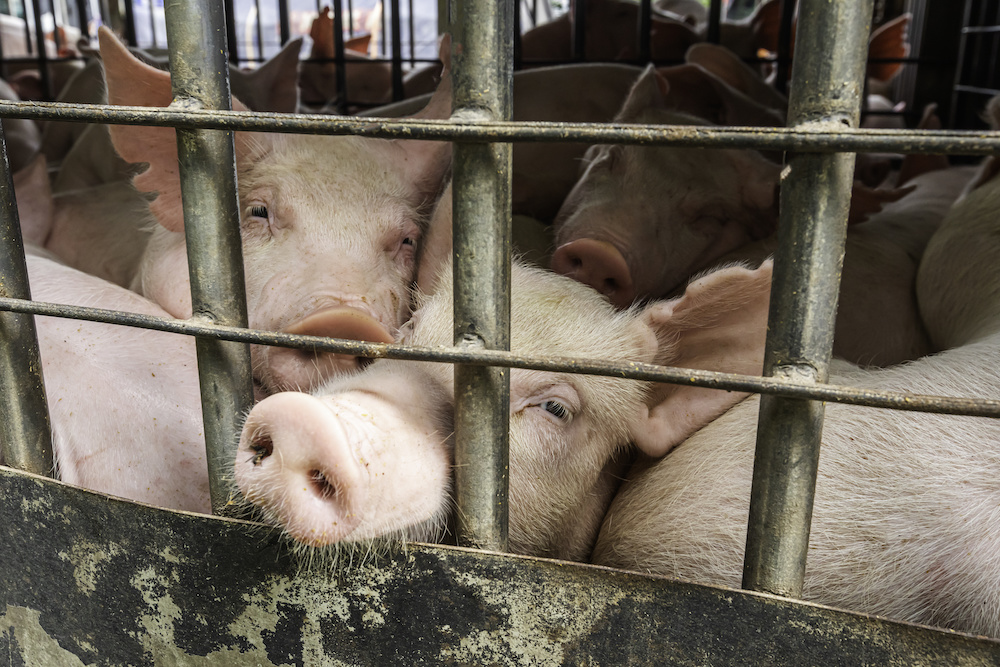 A pigs life can be up to 15 years long, yet many are slaughtered in factories after just six months [Adobe Stock:somrerk]

Romania is amongst the countries who rely most on the sales made from live animal trade, exporting more than two million sheep a year. This came to light in November 2019, when a ship carrying almost 14,000 animals overturned off the Romanian coast on route to Saudi Arabia.

Non-profit organisation Four Paws International was at the forefront of a three-day rescue mission which managed to save 180 of the sheep that were abandoned in a cargo ship swamped with dead bodies of thousands of others. Although unsettled, later investigations clearly pointed towards overcrowding as the main reason for the ship sinking; another indicator that the conditions under which these journies are taking place, do not follow a high standard.

Dr Martina Stephany, Director of the Farm Animals and Nutrition department at Four Paws International, says: “Our partner, ARCA, a Romanian animal welfare organisation, worked tirelessly side by side with the Romanian Civil Protection for many days to search for survivors in the wreck. They rescued 254 sheep, 180 survived. The conditions were worse than anyone can imagine.”

She explains that Dr. Ovidiu Rosu, who has worked for Four Paws in many difficult cases before and who led the shipwreck rescue team described the situation as: “Not even hell is as bad as this. It’s hard, that’s it. I hope it’s over soon, I’m exhausted, we’re all exhausted.”

The organisation is now fighting to promise the sheep that survived a better future. They are currently kept on a special adapted farm near Bucharest to recover and get treatment. “Four Paws was granted the right to make sure the animals are being taken care of in the best way. We will do everything to find good homes for all animals,” Dr. Stephany told us. 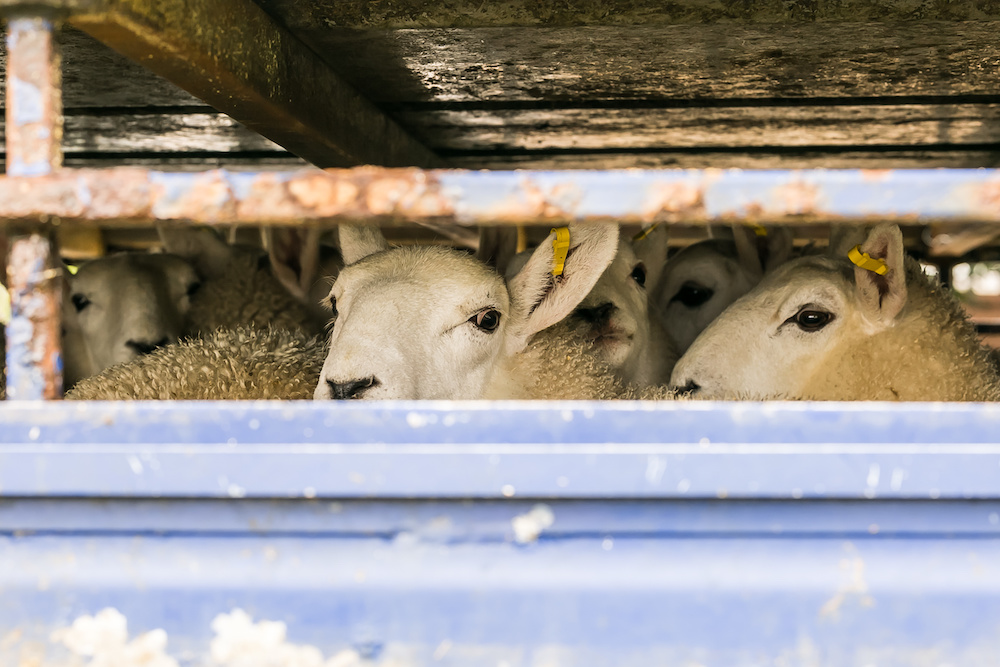 Farmers can use European Common Agriculture funding to raise sheep, even though domestic markets and demand for sheep meat are limited – the availability of such funding makes raising sheep cheaper [Adobe Stock:Alexey Fedorenko]

With a rise in demand for meat in most parts of the world, it raises the question why we as humans encourage such processes if we are aware that the parameters under which it is produced, are doubtful.

A recent study by the German Federal Ministry of Food suggests that 70% of all consumers who buy meat list animal welfare as one of their priorities. In recent years a grading system was introduced by most retail chains, specifying the way animals are kept for packaged meat using a four level system; the first level reflecting the minimum legal requirements.

Unfortunately, the labelling does not seem to have had a substantial effect. “So far we have not been able to identify any significant changes in customers’ buying behaviour,” a spokeswoman for German supermarket chains Rewe and Penny told Tagesspiegel. “Price sensitivity is still high,” she added. 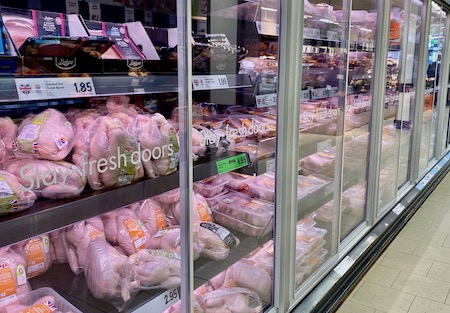 The RSPCA states that most UK supermarkets use misleading information and images to promote consumers to buy cheaper, less sustainable meat [Franziska Eberlein]

“Customers are generally more likely to choose meat from conventionally-kept animals,” she states, resulting in the discounters mainly offering meat from the two lower rankings. “Since we always tailor our offer to the wishes and demands of our customers, the proportions of the respective attitudes reflect this demand.”

Dr. Stephany agrees and believes that changing this faulty relationship between consumer and retailer is essential. “We feel that every consumer needs to do their part. As long as cheap prices are one of the main purchasing arguments, producers are encouraged to go for production systems that maximise yield without considering animal welfare. We need to rethink our consumption patterns, choose more plant-based dishes in our diets and, whenever buying animal-based products, go for highest welfare and regional production only.”

Nevertheless, consumer choices do not seem to be the only side of the debate. In 2019, reports found that 56% of the meat range in German supermarkets had a rating of one and only 10% was in category three or four; in many supermarkets higher-rated meat was completely missing.

Dr. Stephany argues that transparent communication is one of the biggest issues. “One of the main problems we observe here is a lack of transparency for consumers. When looking through animal products at supermarkets colourful packaging and special discounts on meat products attract consumers’ attention, but there is hardly any information available on methods of production and the conditions these animals were raised under.

“The industry must go beyond marketing statements and truly state how these animals have lived. Transparent communication, be it on fresh or processed products, will enable consumers to make an informed choice,” she continues.

The EU claims to have high animal welfare standards and in comparison to other parts of the world, they may have. However, the fact that a ranking as low as one exists, in which a stall space is as big as a portaloo, is questionable. 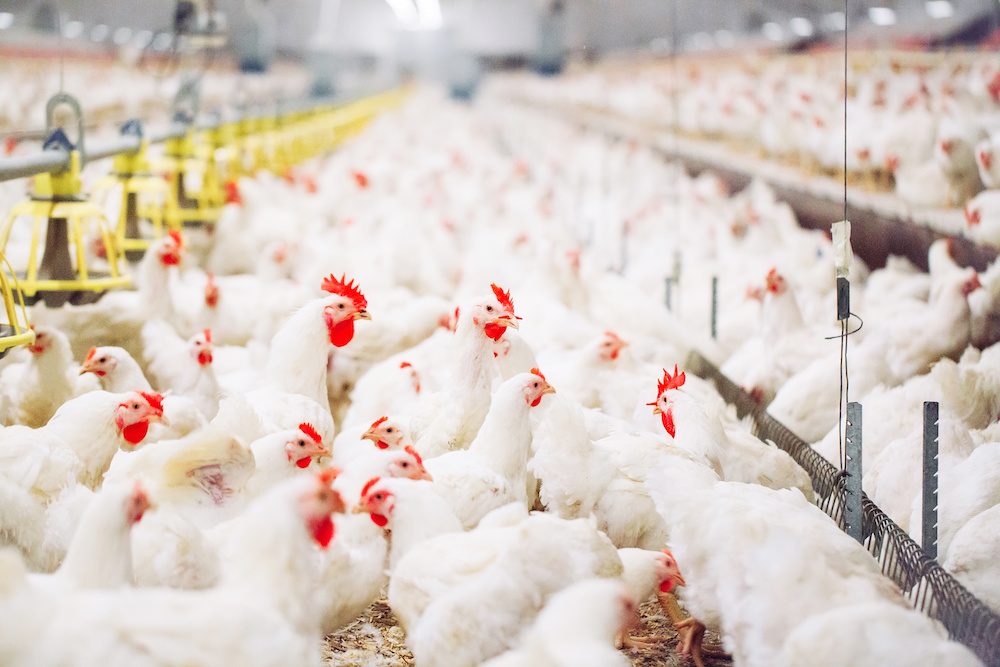 The Bureau of Investigative Journalism found that in the UK, 95% of meat is grown in indoor industrial warehouses, whilst only 3.4% comes from free-range markets and only 1% is organic [Adobe Stock:davit85]

“[European Common] agriculture funding encourages production, and trade strategies along with agricultural policies encourage further surpluses in production, even though there might not be enough demand on domestic markets,” Dr. Stephany explains. “In addition, legislation on live animal transport is weak with very little requirements, making transports even cheaper than they should be.”

Although research suggests that one of the most impactful ways to curb one’s carbon footprint is to adapt a vegetarian or vegan diet, the only opposition to live animal transport does not necessary require everyone to go plant-based. In a divided world of dissimilar opinion there is no point in condemning those who choose a different lifestyle to our own.

“We need to be willing to pay a fair price to farmers, to make sure that they can choose production systems that prioritise animal welfare over yields, and do not depend on exports anymore” Dr. Stephany suggests.

Understanding where your meat comes from and opting for local farmers who are transparent about their processing, could help promote a better life for millions of animals. If conventional meat demand were to decline, perhaps it would be less attractive for big businesses to engage in live animal import and export, ultimately urging them to adopt higher animal welfare standards.

Initiatives such as Happy Meat are trying to encourage just that, by offering an online platform that provides only meat from local and transparent farmers. The customer is able to track which specific animal the produce has been derived from, knowing its origin and the the life it lived, trackable by a chip number. Additionally, the business combats overproduction, only sending out packages when enough people have placed orders.

In millennial fashion, Happy Meat claims: “We make sure that each cow is reared with the highest standards of animal welfare and environmental stewardship in mind. Quite simply, if we can’t Instagram it, we don’t sell it!”

But perhaps waiting for future businesses aiming to tackle the issue is not the only way to reduce conventional meat production. More traditional farming methods, often implemented by local farmers and businesses, can be a better choice as well. 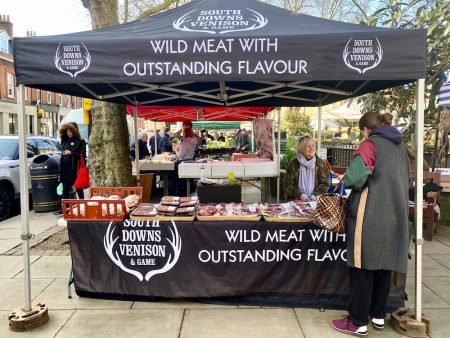 What sets them apart from other businesses is that the deer are shot as part of a managed culling process by professional hunters, which some argue is essential to maintaining healthy herds and protecting woodlands from over-browsing.

Jack’s mother Debbie Smallman, who runs their market stall at Pimlico Road Farmers’ Market, explains that: “This meat all comes from the South Downs, from wild fallow deer herds. All the animals are eating as nature intended; everything is totally natural, no drugs, no farming, no adrenaline when it’s going to market and we don’t have abattoirs anywhere near us.”

One of the most beneficial aspects of their business is that: “Customers benefit from knowing its traceability and that it is totally organic, better than organic,” Smallman states.

A common conception is that these businesses and products are not as accessible, nor affordable as the meat you find in conventional supermarkets. However, Smallman says there has been a significant increase in customers over the last few years: “There’s been a massive uptake; because what people are looking for is meat that is a healthier and more sustainable option.

“I talk food and teach cooking to a vast range of age groups; I have some lovely young couples who come every week and also older people, people who are looking for something that fits their budget. There’s an amazing dynamic.”

In an ideal situation there would be a balance between those going vegan and vegetarian and people buying more sustainable meat from local farmers. “I know that the advent of veganism seems to be taking control of a certain quarter of the population, but actually the people we see here are looking for good quality, sustainable products and this is what we provide, or better yet what nature provides,” Smallman says.

Unfortunately, until we contribute to change and consider our consumer choices more critically, this is not reality. Dr. Stephany believes that: “The system currently treats animals like profit-making commodities. As long as this is the case, live animals will be transported on week-long journeys under excruciating conditions.”