Generation snowflake is a badge few wear proudly but it is worn by many nonetheless. Oversensitivity is running rampant with many unable to deal with stress and the propensity to be offended by a handful of words is clear, especially on social media.

Could this all be a sign of a society in decline? And if so, what are the causes? And what hope do school children currently have as they prepare for the wider world that seems to be in such dismay?

The Programme for International Student Assessment [PISA] run by the Organisation for Economics Co-operation and Development (OECD) released a survey in 2018 on ‘What School Life Means for Students Lives’.

Life satisfaction rates have dropped by 13% among UK pupils between 2015 and 2018, a sign that things are only getting worse

Among the 36 OECD countries, Britain ranked second from bottom above Turkey which ranked the lowest, with Japan above us by 0.02 life satisfaction points.

Britain and Japan also share the lowest percentage of students reporting a nine or ten on the life satisfaction scale, with only 20% of students rating ‘very satisfied’. Korea and Turkey had more student’s rate ‘very satisfied’ with 21% of Turkish and 26% of Korean students happy with how their life is going.

South Korea is a developed country with a high-income economy and is the most industrialised member of the OECD with brands like LG Electronics and Samsung calling it home.

Around 100,000 Brits travel to the country each year with an estimated 8,000 living and working there. Shared values in democracy, rule of law and the economy between the UK, USA and South Korea have allowed a steadily growing democracy to thrive.

While Turkey holds a relatively poor human rights record and as a result has been subject to international condemnation. Between 1998 and 2008 the European Court of Human Rights made more than 1,600 judgements against Turkey for human rights violations, particularly regarding the right to life, and freedom from torture. Issues with women’s rights, LGBT rights, and press freedoms also plague the country.

Given the stark contrast between South Korea and Turkey people surveyed in both countries are still more satisfied in life compared to the UK.

The OECD is not alone when explaining the unhappiness within Britain’s young people. Last year a study of 1,500 people carried out by Yakult and reported on by The Sun newspaper found 89% of Britain’s young people strongly believe their life lacks purpose and meaning, with 34% of them claiming anxiety and 45% claiming financial worries as the reason for their underachieving. 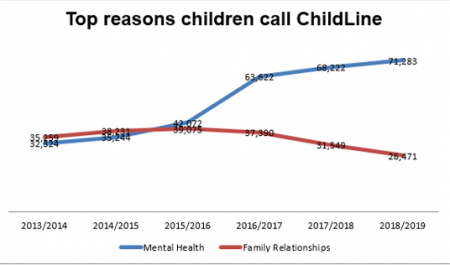 What are we neglecting in Britain that is causing such a low level of happiness among our young people?

The OECD study from 2018 explained how economically weak but religiously strong countries like Panama and Albania held higher life satisfaction rates, so could our lack of faith be holding us back?

According to the British Social Attitudes survey for 2018; only 1% of 18-24-year-olds identify as Church of England Christians. The number of people identifying as Christian, in general, has also fallen from 66% to 38% since 1983.

Studies have shown religious people are on average happier than non-religious individuals when looking at survey data carried out in numerous countries like the USA, Mexico and Australia by PEW Research Centre.

While more studies need to be carried out to prove religion is directly responsible for an individual’s happiness, increased social participation and connections seem to play a major role when dictating one’s satisfaction with life.

This claim was echoed by The Journal American Sociological Review in 2010, as Sociologist Chaeyoon Lim from the University of Wisconsin explains; “We show that [life satisfaction] is almost entirely about the social aspect of religion, rather than the theological or spiritual aspect of religion. We found that people are more satisfied with their lives when they go to church because they build a social network within their congregation.”

The study carried out by Harvard and the University of Wisconsin claims religious people are statistically happier than their non-religious counterparts with 28% reporting to be ‘extremely satisfied’ compared to 19.6% for the latter.

Lack of religion in Britain, therefore, may be damaging our moral compass. In 1983, 42% said there is nothing wrong with sex outside marriage, compared to three-quarters in 2018. Are we losing our morals and if so how much blame should we also place on social media, especially sites like Instagram who thrive on the individual’s body image and sexual promiscuity?

The Royal Society for Public Health has stated Instagram is the most damaging social media site when it comes to young people’s mental health, as it negatively affects teenagers body image, amount of sleep and maybe driving feelings of inadequacy and anxiety.

A report by the Education Policy Institute think tank states over a third of 15-year-olds in the UK can be classed as ‘extreme internet users’ who spend at least six hours a day on the internet.

It has also been argued that a national identity could create a sense of social unity, solidarity and cohesion in a national group. This belief holds strong within social and political theory. English philosopher J. S. Mill, for instance, argued that “the boundaries of governments should coincide in the main with those of nationalities” because a state with several nationalities is one in which members are “artificially tied together”.

According to The British Social Attitudes survey for 2018 the only faiths which are notably growing in the UK are Christian Pentecostalism, most likely due to immigration from West Africa and Islam, which grew from one per cent in 1983, to three per cent in 2008, to six per cent in 2018.

These arguments are beginning to resurface in the UK due to the increased levels of mass migration, many are questioning to what extent aspects of ‘British’ culture are able to be maintained and preserved given the high migration levels and to what level is assimilation taking place?

The 2018 OECD report singles out the UK as a country in which “students with an immigrant background were much more likely to report a greater sense of meaning in life than their native-born counterparts.

While cultural assimilation is possible it tends to take place within second-generation individuals from migrant families while first-generation families typically maintain cultural values from their country of origin according to a study by Alex Mesoudi, Professor of Cultural Evolution in the Human Behaviour and Cultural Evolution Group at the University of Exeter.

To explore the dynamics of acculturation, Alex Mesoudi created a series of computer simulations to ask what level of acculturation is needed to maintain the host’s distinct cultural traditions in the face of different levels of migration.

“The simulations showed that migration with no acculturation breaks down distinct host cultures. This is the scenario envisioned by anti-immigration campaigners. Even a little migration, without acculturation, soon creates a homogeneous worldwide blend of the cultural traits that were originally unique to different societies,” Mesoudi explains.

People cannot be happy if they are absent of hope if they don’t know who they are, what they want to be, where they are headed, and if their culture and way of life are dying a slow death.

In a society where an individual can have everything in copious amounts, from food to information, there is always something one does not consider, and in this case, it’s what truly gives us meaning in life and the ability to achieve this.