Having a hidden disability is challenging, having an invisible disability is just as hard but lacks the same level of awareness. Invisible illnesses are conditions that do not have any visual manifestations, they can range from anxiety disorder to autism and arthritis.

There is a lack of understanding when it comes to invisible disabilities – they are hard to pick up on and hard to visualise which results in giving the illusion of being ‘normal’.

What is forgotten is that not everyone that has a disability is disabled. “A fair share of those living with these challenges are still active in their work, hobbies or families,” the Invisible Disabilities Association states.

There is a stigma towards anyone with some sort of disability which automatically puts them in a category of being unable when they just want more awareness and just an extra bit of help when it comes to everyday challenges compared to the rest of humanity.

The awareness of invisible disabilities is now slowly getting the same appreciation as a physical disability. The first step of progress is that it has become official that people with a hidden disability will qualify for a blue badge.

The scheme which already has 2.4 million people with a physical disability signed up, has offered a possible life changing opportunity by making it easier for people with anxiety, epilepsy, dementia and families with autistic children to receive a badge, the Mirror states. This offers the community the confidence to live more freely and not in fear, the extra support gives them the courage to fulfil their needs.

Bethany Dawson, a student at the University of Sussex has been living with a hidden disability since she was 13. She had chronic back pain after a routine surgery which triggered an autoimmune disease. It took six years to learn that it was the case, however, she was misdiagnosed with nerve damage for three years.

It resulted in the following two years of having tests to figure out what her condition really was. At the age of 18, it was official that Bethany was diagnosed with Ankylosing Spondylitis (non-radiographic axial spondyloarthropathy).

AS is a type of inflammatory arthritis that predominantly affects the spine. Unfortunately, it affects the vast majority of her joints, including her hands, knees and hips. 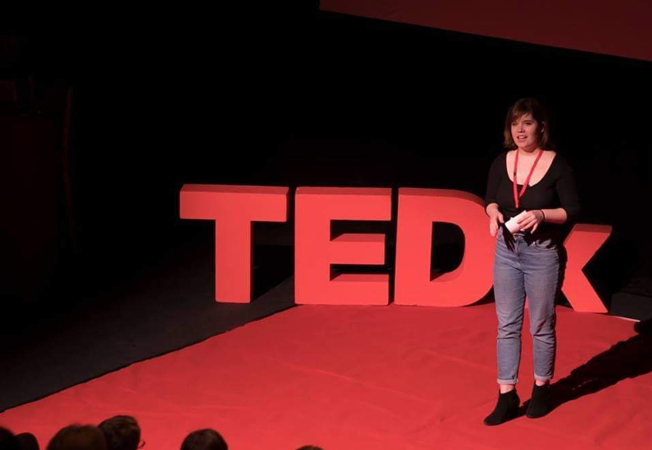 Bethany Dawson giving a Ted Talk about living with an invisible illness. [YouTube:TED]

Instead of letting her disability affect her, Bethany is the co-founder of the website BVisible, raising awareness to people living with an invisible condition. The BVisible website allows more information to be accessed across the globe, whilst also allowing younger people with a disability to feel more at ease with their living conditions, as the website was founded by a group of university students.

Bethany realised that for change to happen she needed to start the process. As well as that, she and other students from Surrey University with hidden disabilities uploaded a video with more information to allow students to not let their confidence to be affected.

Wanting to make sure that confidence was not affected is crucial, it allows everyone to feel that they are not different from the rest of the world and are just as capable to do anything they set their mind too.

Not only that, Bethany performed a Ted talk Taking the ‘invisible’ out of invisible illnesses. With over 22.7 million subscribers the Ted talk was an amazing platform form to allow such a personal matter being broadcast on such a wide platform.

This opportunity just highlighted the start of more recognition surrounding the topic. With hope it continues.

When it comes to living with her condition it’s a struggle: “I wear glasses because I’m short sighted, luckily they’re easy to use and no one judges me for them. They’re still an access requirement because I can’t see clearly without them. They’re a widely accepted adjustment I, and many people other people need.

“The other needs that I have because of my AS, like needing a walking stick sometimes, not being able to use the stairs, to needing a seat on the tube etc. That’s not accepted and it can be really difficult to push for those adjustments.

“Mainly it’s because I don’t fit the stereotype of a person with severe joint issues, so when people see a young, healthy looking person, they don’t consider that I might be ill. When they realise I am, it doesn’t fit with their preconceptions and it’s uncomfortable for them. This leads to lots of stereotypes and assumptions pushed on me that I have to funnel a lot of energy into fighting. Being in pain most days and live with chronic fatigue isn’t exactly peachy!”

Bethany isn’t alone – there are around 13.3 million people with disabilities living in the UK however, 96% of illnesses are invisible, High Speed Training suggests.

Put it this way, imagine a woman getting on a bus, appearing completely normal however desperately in search for a seat because she has arthritis. People are quick to make assumptions and automatically close off any other options. Life is daunting but going through daily challenges shouldn’t be made harder.

Being diagnosed with a long-term condition is difficult to come to terms with for everyone involved. Epilepsy is unique, some people will have it all their life or it could also be a phase in their life that fades away.

Nonetheless, it is essentially another invisible disability, greatly affecting someone’s everyday activities, depending on the severity of the condition. Epilepsy fits are seizures that start in the brain, the brain uses electrical signals to pass messages between brain cells. When these brain cells are disrupted this can lead to a seizure, the Epilepsy Society states.

Seven years ago, Fiona had her first seizure. A completely normal healthy young girl with no idea epilepsy would change her life. Three years after her first seizure she was finally diagnosed with absence seizures, a form of epilepsy. During that period of the unknown diagnoses her family were left with the questions, how did this happen? And why Fiona?

She tells me that growing up was difficult now being 18. “No one realises that there is always a constant fear that at any moment you could have a fit, being so young I had to mature rapidly. I had to be cautious of my sleep schedule and that I don’t overstress myself but it was hard, I wanted to go to sleepovers, stay out late but it was a process for me to come to terms that currently because of my condition I cannot.” 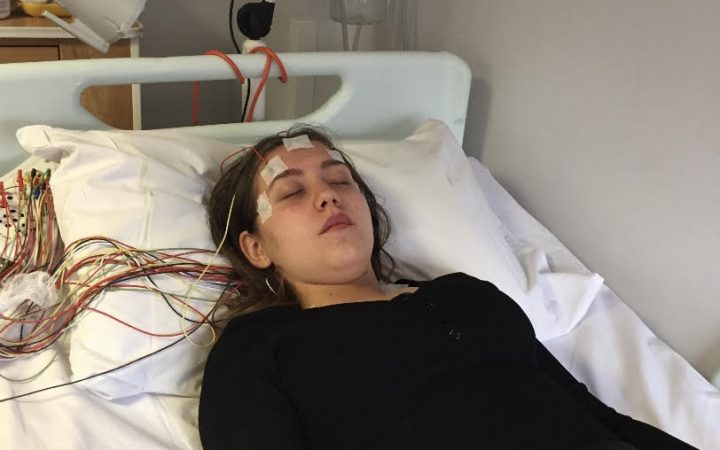 Fiona going for a regular hospital check up [Livia Likurti]

The phycological aspect of having a hidden disability is not talked about as much, feeling isolated can have a toll on someone. Fiona went on to mention: “Having to miss so much school for hospital appointments was hard as well as always having to explain that I have epilepsy and not seeing my friends as much as I wanted to; it did start to make me feel sad and isolated.”

“People don’t realise the other effects that come with being epileptic, such as constantly being tired and having fatigue. I feel as if I need to sleep double the amount of an average person, I find myself falling asleep whilst in class, watching TV or even reading a book. It is tough. However I am grateful that I have a diagnosis as many people go years without knowing what condition they have, I try to stay positive as I am not going to let my illness define me.”

When asked what the hardest about having epilepsy was Fiona described that having to take medication every day is a constant reminder of what I have: “Sometimes I wish I didn’t have to think about my condition however I have learnt to embrace it as it is a part of me and currently I don’t know how long it is staying for but it’s here.” 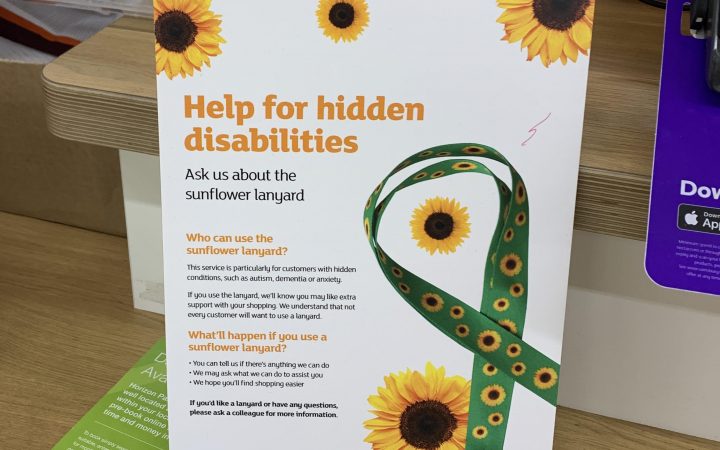 There has been a massive increase of awareness for hidden disabilities with the big supermarket chain Sainsbury’s, they have introduced the sunflower lanyards.

In order in doing so, they said that “helping and supporting all our customers is at the heart of what we do. So, we’ve introduced sunflower lanyards to give to customers who may have disabilities that aren’t visible, like dementia or autism, for example, an easy and discreet way to let us know they might need a little extra help with their shopping. It might be understanding that some customers with disabilities may behave differently or just asking if there’s anything extra we can do to help.”

Making everyday challenges easier for people with a hidden disability allows them to feel more comfortable and confident, having a level of reassurance helps and pushes everyone to carry on and enjoy every aspect of life.